Introduction
I am a current hospitalist physician in a large not-for-profit hospital in Columbus, Ohio. I have been practicing medicine for approximately three years. Physicians are the de facto leaders of an inpatient medical team, and rightfully so, as the overall care of the patient is their ultimate responsibility. My day to day duties require seemingly thousands of individual decisions. To do this effectively, and in the best interest of each unique patient, I need the honest input of each member of my entire medical team (consultants, nurses, therapists, social workers, etc.). We all differ in our own individual training and work/life experiences, and when combined can formulate the best treatment plan possible for the patient. This collaboration is actually more of a requirement than a luxury, as increasing amounts of medical knowledge and specialization has led to more interdependence of multidisciplinary medical team members. Partnership requires effective communication and a strong working environment.

Physicians who see patients on multiple different units across a healthcare system will be part of numerous multidisciplinary teams in contrast to the various “unit-based” nurses, therapists, care coordinators, and ancillary staff. This inherently creates a non-standardized workflow and a sense of unfamiliarity between the physician and other team members. In fact, the medical industry is unique in that the teams can be very dynamic (and this is really the norm), which is far different from most other service industries. Teams are based on each unique patient’s needs, may come together for short periods of time, consist of multiple specialists or other service providers, and must integrate numerous professional cultures (Manser, 2008). 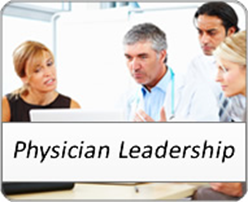 In medicine, a perceived hierarchy exists where non-physician team members may defer their opinion/input to the physician for fear of reprimand or embarrassment. I have seen this first hand. This weakens the team morale and care for the patient. It is the responsibility of physician leaders to create an environment where every team member feels safe in offering their opinion without hesitation. This is generally not something a young pre-medical student takes into account, no matter what their intentions for entering the field may be. Given this, I have had to inwardly seek and adapt my own leadership style in a relatively brief amount of time.

Synopsis
The dynamic of inpatient medicine has been rapidly evolving such that physicians and other members of a comprehensive care team are more specialized than ever before. This creates an increased reliance of all members of the care team towards one another, with physicians acting as the leader. All members of the care team offer invaluable information, ideas, and expertise in caring for the patient, yet may feel apprehensive in speaking out due to fear of embarrassment or ridicule.

It is the ultimate job of the leader to create a culture of inclusion and mutual respect for all disciplines on the multidisciplinary medical team. This can be accomplished through the practice of leadership inclusiveness. This practice draws from several well-established leadership theories that serve to strengthen the relationship between the leader and followers as well as help followers become more comfortable with themselves, the team, and their situation. In turn, this creates a psychologically safe environment where all team members are able to work without fear of negative consequences. This ultimately enhances team member production, creativity, and satisfaction as well as improving communication between all members of the care team.

Changing Healthcare Dynamic and Creation of Multidisciplinary Interdependence
The dynamic of inpatient medicine, caring for patients in an acute care hospital, has changed dramatically over the previous decades. Gone are the days when general practitioners and family physicians would put in a full day’s work in a private practice outpatient clinic and then go to the local hospital to manage the full inpatient needs of their acutely ill patrons.

Science, innovation, medical advancements, and knowledge gains have rapidly progressed since that time, leading to an inpatient healthcare dynamic that would seem foreign to those earlier general practitioners. These advancements have led to countless new treatments that are allowing people today to live longer and healthier than at any other point in history. However, no single individual can any longer absorb all of the new knowledge and become proficient at all of the advanced techniques that are now standard in today’s hospitals.

This has led to the increased specialization of healthcare, necessitating an increased depth but with decreased breadth for healthcare professionals. This fragmentation of healthcare, while allowing the delivery of the best evidence-based medicine possible, has led to the division of critical knowledge amongst many different practitioners. This knowledge division has in turn lead to the creation of multidisciplinary teams with increased interdependence of working group members. The team as a whole depends on the expertise and input of each individual member which is then integrated to formulate an all-encompassing care plan for the patient. However, multidisciplinary collaboration is something that must be actively learned and improved upon. It is generally not inherent. The Institute of Medicine’s landmark report Crossing the Quality Chasm: A New Health System for the 21 Century notes that “members of teams are typically trained in separate disciplines and educational settings, leaving them unprepared to practice in complex collaborative settings” (Institute of Medicine, 2001). 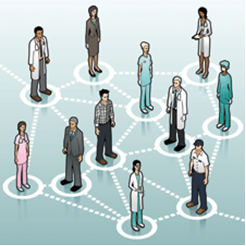 The Inpatient Healthcare Team of Today
The typical inpatient care team would likely be unrecognizable to practitioners of prior generations. There are currently many different healthcare professionals and specialties that may be involved in the care of any particular patient. Each group member has a unique knowledge and skill set that will be used in creating an overarching care plan for the patient. Plans of care can realistically change from moment to moment depending on the evolving clinical status of the patient. For this reason, teams are being increasingly valued for their potential to innovate, solve problems, and implement change (Nembhard and Edmondson, 2009). Just like plans of care, team members are also dynamic, ever changing based on the patient’s needs. A typical medical inpatient care team and their general responsibilities would be comprised as follows: (Freshman et al., 2010)

Leadership in Healthcare and Public Health by John Guido is licensed under a Creative Commons Attribution 4.0 International License, except where otherwise noted.