One will find a range of fashion in Turkey today, from traditional to modern, from religious to secular. In urban areas dress appears Western for the most part, but reflects a synthesis of traditional, Islamic, and Western designs. İstanbulite, Melisa Akbulut, on her personal style:

“I think a person’s style provides information about [their] character and mood. . . I would describe my personal style as simple. I usually wear a sweater, a shirt inside of the sweater.  After that, I combine it with a jean.” Melisa Akbulut 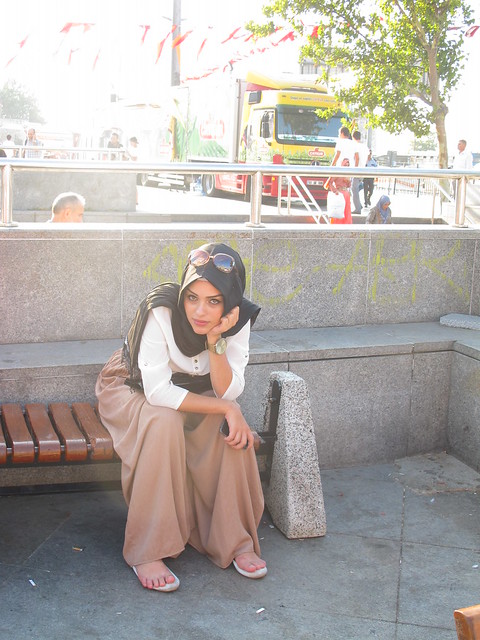 The rest of this chapter will provide a chronology of Turkish clothing developments which led up to the state of fashion in Turkey today.

Turkish fashion finds its roots in functionality. Historically, the most common form of transportation in Central Asia was horseback riding. This mode of transportation meant that clothing had to be functional and, as a result, most was unisex. Due to their practicality, leather and felt were the most common materials used. As tribes from Asia began to settle in Anatolia, the new cultures brought along changes in clothing. The varying climate in the area meant that clothing needed to be useful in all conditions, which lead to the use of removable fur linings.

Later, during the Tanzimat and Meşrutiyet periods of the 19th century, socio-economic status began to heavily influence clothing styles. Commoners maintained traditional clothing styles, while royals or wealthy folk changed their style to redingot, which consisted of a waistcoat, jacket, tie, and high-heeled shoes (Turkish Cultural Foundation). Even so, as the Ottoman Empire expanded, local clothing traditions became more fixed. By this time, weaving had become prominent throughout Turkey and was commonly used to make clothes.

Upper-class or royal people in the Ottoman Empire wore fur-lined, embroidered kaftans. The middle class wore cübbe and hırka, a specific style of jacket. The lower class also wore a different style of jacket, called cepken or yelek. Bashlyks, a type of hat, were the most important status signifier: kavuk was the most common type, and a tradesmanship was formed due to the significance of bashlyks in the 17th Century.

In the 16th century, economics, politics, and arts thrived as the Ottoman Empire entered the Golden Age. Textiles also reached a peak with the introduction of weaving, especially metallic threads. Sultans took the utmost pride in their fashion, wearing robes or kaftans of the finest, most expensive materials. The designs for court clothing were made by specific people in the palace called hassa nakkaşları. Due to high demand, there were also places in Bursa and Istanbul that made the designs. Specific fabrics were used for the Sultan’s clothing, such as brocade, velvet, metallic silk, taffeta, cashmere, and cotton. These materials were occasionally ordered from areas in the West (for example, Italy). Sultans specifically wore kaftans, şalvar (a type of pant), and an inner robe, as well as headgear. The headgear went through five types over the span of the Ottoman Empire. For formal or official events, Sultans wore an inner robe with long sleeves that buttoned from the elbow down to the wrist and consisted of cuffs, a short kaftan made of heavier silk material, and a long outer-robe with fur lining and buttons made of jewels (Turkish Cultural Foundation).

Oya, also known as Turkish lace, has a different name depending on what implement is used to create it. Oya made with a sewing needle was made by aristocrats. Crochet oya is made with a thicker needle and looks less delicate, while shuttle oya is more often produced by women in provincial areas. Hairpin oya uses beads, sequins, pearls, or coral on a single-colored thread. Beaded edges are a very popular embellishment in Turkey. Headdresses and scarves are traditionally decorated with oya, as well as undergarments, outerwear, towels, and napkins. Oya is commonly used by young women to express their feelings or mark life events. Floral oya is worn atop a woman’s head. The flowers vary depending on the age of the woman. Older women use wildflowers, while younger women use roses, carnations, jasmine, and many other flowers. Women at the age of forty specifically wear a bent tulip (Turkish Cultural Foundation).

The Hat and Dress Revolution of 1925

After the Republic of Turkey was established in 1923, Atatürk believed that wearing modern clothing represented civility. His instituted a number of clothing reforms aimed at modernization, which at that time meant Westernization.  , This included outlawing the fez, the banning of Islamic robes and veils, and the general encouragement of Western styles. These reforms were meant to demonstrate Turkey’s commitment to modernization and promote national unity.

Ataturk’s reforms in the early twentieth century greatly increased Turkish women’s rights and freedoms, whose appearance in public symbolized equality in the late Ottoman Empire. Thus, this time period signified a rapid change in fashion for women. As women gained more personal liberty and felt the pressure of the national movement to modernize, their clothing became more Westernized. With European influence, women began to wear more expressive outdoor clothing, in colors that had been restricted in the past (İnal, 2011, p.234). They also began to wear a new type of outdoor clothing, çarşaf, instead of the traditional outdoor robe, ferace. This was then shortened and tightened to reveal the contours of the body.

Veils were either made transparent or were completely replaced with an umbrella used to hide the face.  Surprisingly, this innovation wasn’t due to government reforms.   Rather, this public presence of women’s faces had more to due to with women joining the workforce as men left for war. Thus, practicality also played a role in the transformation towards Western styles.

Some women wore a new style of headscarf called rusbaşı that showed some of their hair and neck. Comfortable shoes and new accessories were also introduced. Skirts were shortened and pants were worn by women of specific industries. Women began to wear their hair short, following trends in Europe and the United States. Women in Istanbul, specifically, were heavily influenced by Parisian fashion.

Islamic dress has continually been a source of tension in Turkey.  In the 1970s, headscarves were regulated, and women were asked not to cover their hair at their workplace. A new way of wearing the headscarf came into fashion in the 1990s among the urban middle class. The style was larger, used pins, and covered both the hair and neck completely. In 1982, the headscarf was banned at universities. This ban was also put into order in other public institutions in the late ‘80s and ‘90s, including the military, parliament, and courtrooms. This was widely debated, and some women were even denied access to education due to wearing a headscarf. The Justice and Development Party, or AKP, attempted to overturn this ban in 2008, but it did not pass. They continue to develop new amendments to reduce restrictions regarding the veil. Due to more recent changes in politics, though, the ban has been lifted in most universities.

Islamic Fashion Commercialized on the Runway

Islamic clothing has been used as a symbol for religious freedom in contemporary Turkey, especially as  headscarves are taking over the runway. Headscarves are now colorful with many patterns, with the most popular being yellow, blue, camouflage, and tropical leaves. Istanbul wants to become the Islamic fashion capital—they hosted the Istanbul Modest Fashion Week, which featured designers from all over the Islamic world. The market for Islamic fashion is now increasing as mainstream designers, including Tommy Hilfiger and DKNY, have designed their own lines of Islamic fashion for Ramazan.

Turkish clothing has continually been defined by economics, social structure, geography, climate, and available materials. In early periods, clothing signified social status, while traditional dress remained prevalent throughout the country. Certain regional specialties in textiles or in styles can also reveal ethnicity.  At the same the Ottoman empires diverse religious and cultural communities expressed their identities in their dress.

Today, one’s clothing choices still can reveal information about them. For example, you can identify where a person is from in Turkey based on how they’re dressed, as fashion varies significantly between each of the seven regions. Sometimes, one can even distinguish what village they’re from! In addition to the types of cloth, or the way clothing is tailored, other expressions can give clues to identity. For example, in Turkoman villages, the way a woman wears her hair communicates her relationship status.

Traditionally, clothing was handmade and its style depended greatly on location as it was made from natural, available materials. Today, modern clothing is ready-to-wear and bought in stores. It is influenced both by traditional, Ottoman styles and European trends. Clothing continues to be an important device in which one can communicate their social status, wealth, piety, and personality.

Windows into Turkish Culture by Danielle V. Schoon is licensed under a Creative Commons Attribution-NonCommercial 4.0 International License, except where otherwise noted.