The theories explored in our various modules so far have implications for the prevention of substance misuse and substance use disorders, including (but not limited to) delaying or preventing substance use initiation. The Substance Abuse and Mental Health Services Administration (SAMHSA) produced a Fact Sheet through the Center for the Application of Prevention Technologies discussing prevention as part of a behavioral health continuum of care. The Fact Sheet includes a diagram built on the foundational work presented in an earlier Institute of Medicine report diagramming the relationship between prevention, treatment, and maintenance in mental health care (IOM, 1994). This continuum of care framework is applicable to intervening around substance misuse and substance use disorders, and with the addition of health promotion embraces much of what is important in the recovery support services movement (Bersamira, in press). 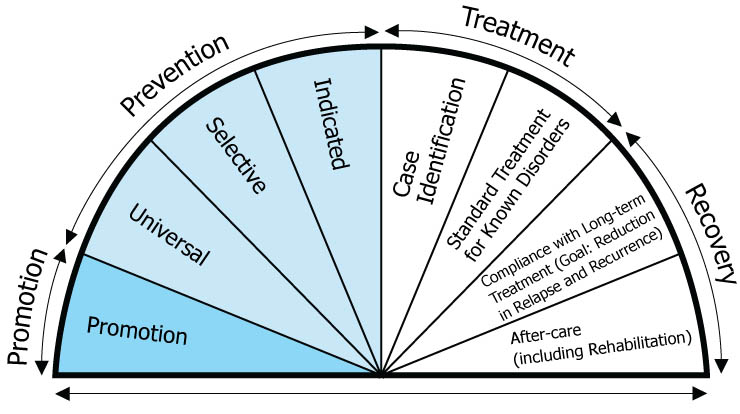 This is how the Fact Sheet described the different “wedges” of the spectrum: 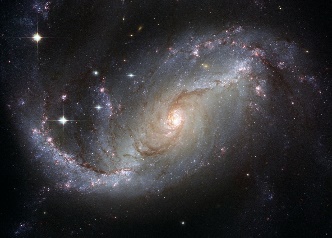 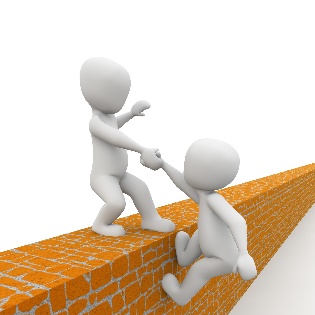 Additional points made in the Fact Sheet include the fact that interventions do not necessarily fit into only one category. For example, a universal prevention intervention may take the form of health promotion. The term relapse prevention also may introduce a bit of confusion here: preventing a relapse to the old behavior is not usually considered part of the prevention continuum; it is usually considered part of the recovery/maintenance portion of the continuum of care.

Additionally, the fact sheet suggests that risk and protective factors may be both correlated and cumulative. On one hand, a person with one vulnerability or risk factor may be more likely to have multiple vulnerability and risk factors (positively correlated). This person also may have fewer resilience or protective factors, as well (negatively correlated with risk/vulnerability). On the other hand, a vulnerability or risk factor introduced early on may have developmental impacts that compound the person’s vulnerability or risk over time. For example, being known as someone who uses alcohol, tobacco, or other drugs as a young adolescent might lead to that person being labeled, shunned, and stigmatized by peers. This, in turn, leaves that person vulnerable to social isolation and being attracted to a “deviance promoting” peer group, which compound the vulnerability and risk for substance misuse. The risk and vulnerability load just keeps getting heavier and heavier. Risk and vulnerability factors influence one another, underscoring “the importance of (1) intervening early, and (2) developing interventions that target multiple factors, rather than addressing individual factors in isolation” (SAMHSA, n.d., p. 7). 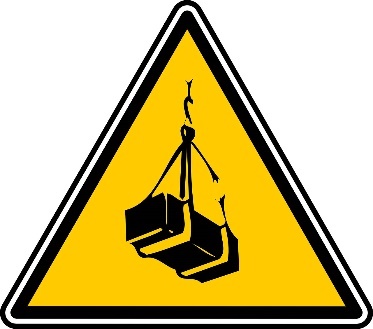 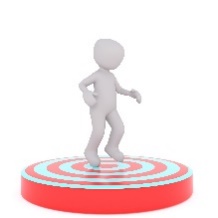 Just as treatment interventions need to be developmentally appropriate, so do prevention interventions. Children and adolescents are qualitatively different from adults; simplifying or “dumbing down” interventions for adults is not sufficient adaptation for younger populations. Because the risk and vulnerability factors are different at different periods of the life cycle, preventive efforts need to be tailored to what is relevant and salient at different periods (SAMHSA, n.d.). Preventive interventions also need to be appropriate for the vulnerability/risk mechanisms operating at different life periods. For example, if the concern is ease of access to substances, intervention might be targeted at the neighborhood/community or policy level rather than individuals; if the concern is to build initiation resistance skills, the intervention might be aimed at the individual level.

The SAMHSA Fact Sheet presented a set of tables of risk and protective factors for substance use disorder mapped to broad developmental period. These tables can help inform prevention strategies and used O’Connell, Boat, & Warner (2009) as their source. Their tables are replicated [with minor modifications] here and represent general mental health prevention goals at early ages.

Another possible interpretation of prevention is intervention to slow, halt, or reverse progression from substance use to substance use disorder. As you learned in Module 4, there exists evidence suggestive of a developmental course of substance use disorder/addiction, even if there also exists variability in the course and its expression. Consider the developmental picture of average ages at which different events occurred in the lives of a group of individuals in treatment for alcohol use disorder (Schuckit, et al.,1998). Notice how many years (8!) were present between the average age at when blackouts due to drinking first occurred and when these men and women entered into treatment for alcohol use disorder: a harm reduction strategy might involve shortening this time span to reduce the physical, social, legal, and other harms that might accrue during that lengthy time span.

In their book chapter about preventing alcohol and drug problems, McNeece and Madsen (2012) identified a host of efforts and strategies, including at the policy level. At this point, you should turn to the McNeece and Madsen (2012) chapter to become familiar with how they describe primary, secondary, and tertiary prevention (aligned with universal, selective, and indicated prevention) and their review of the following types of prevention efforts:

Don’t forget to return to this coursebook for Chapter 3!