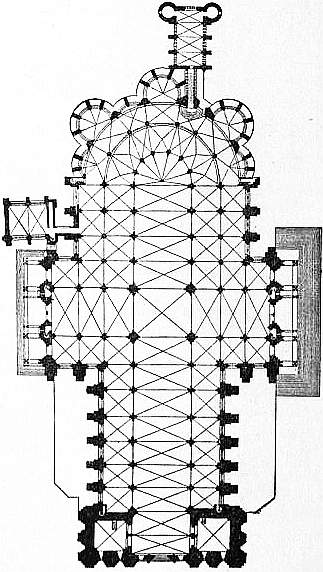 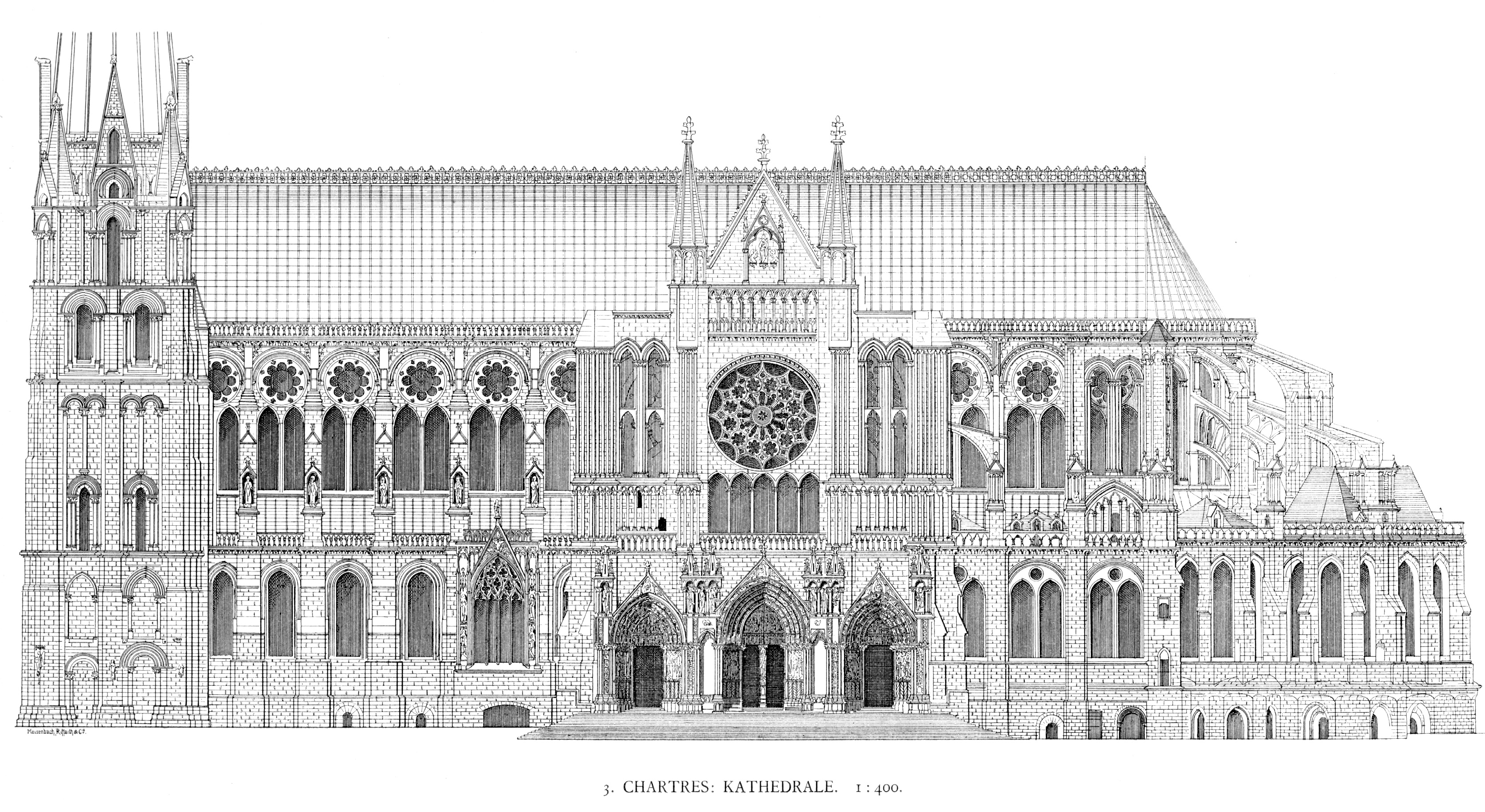 plan and elevations of Chartres Cathedral 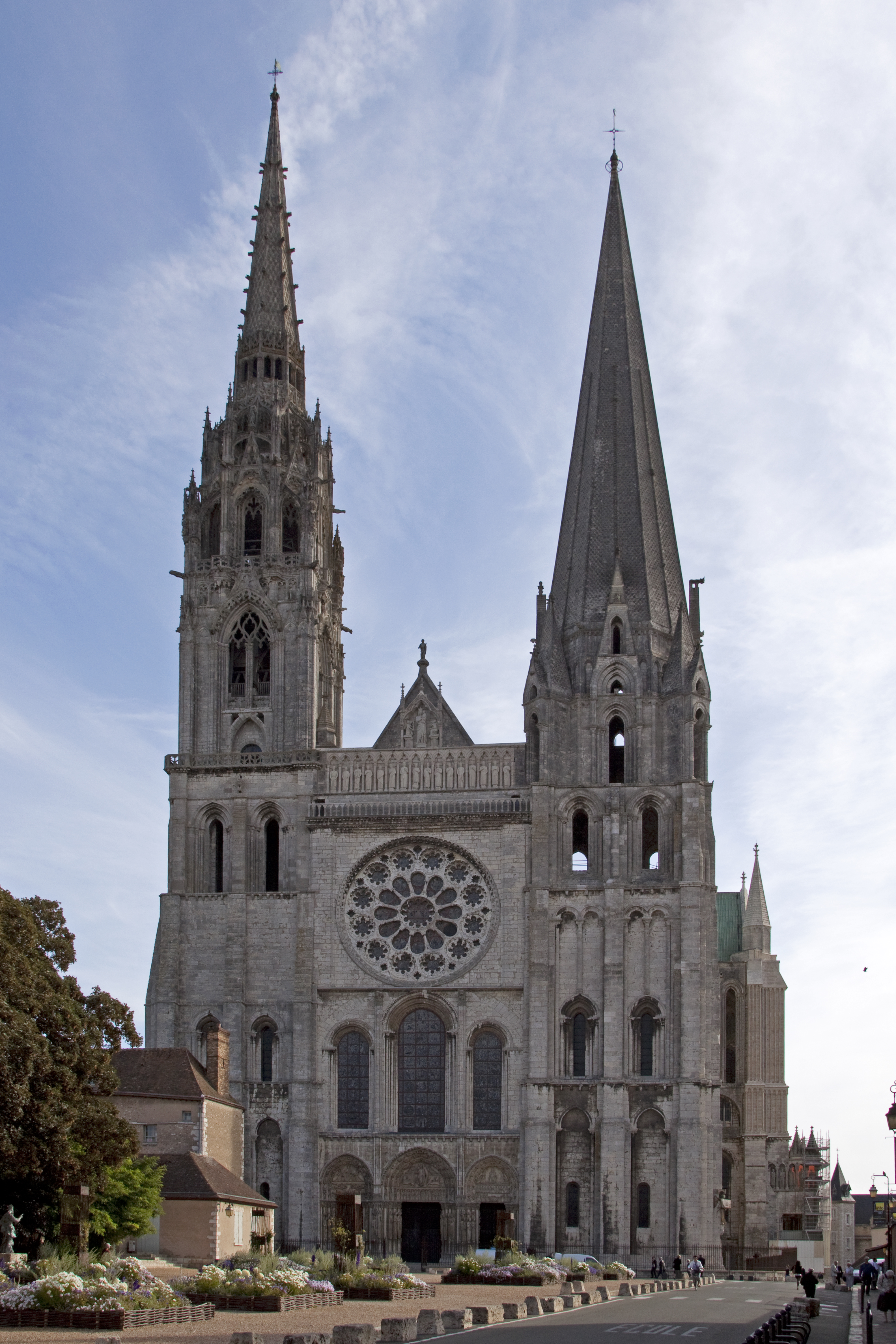 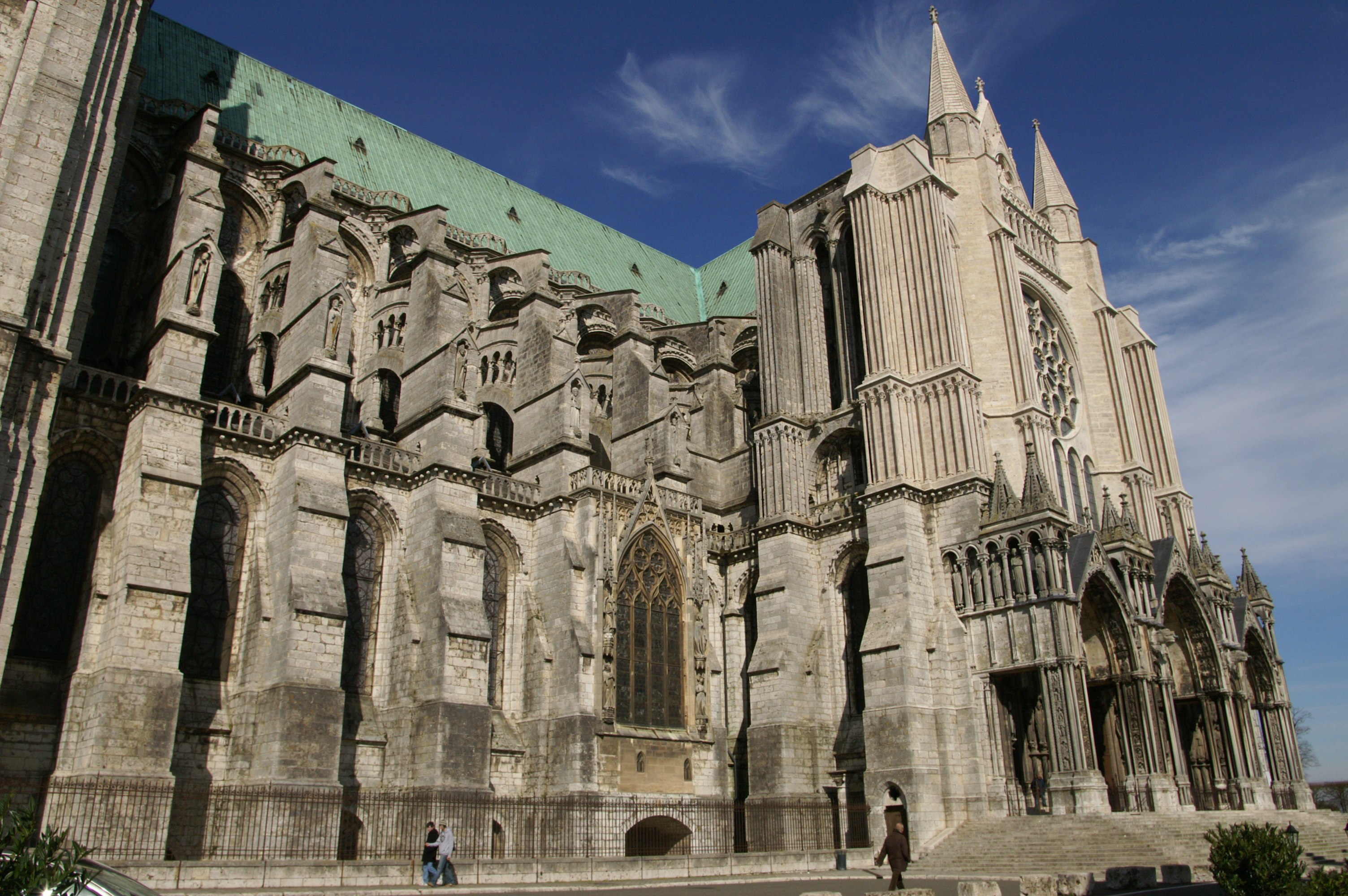 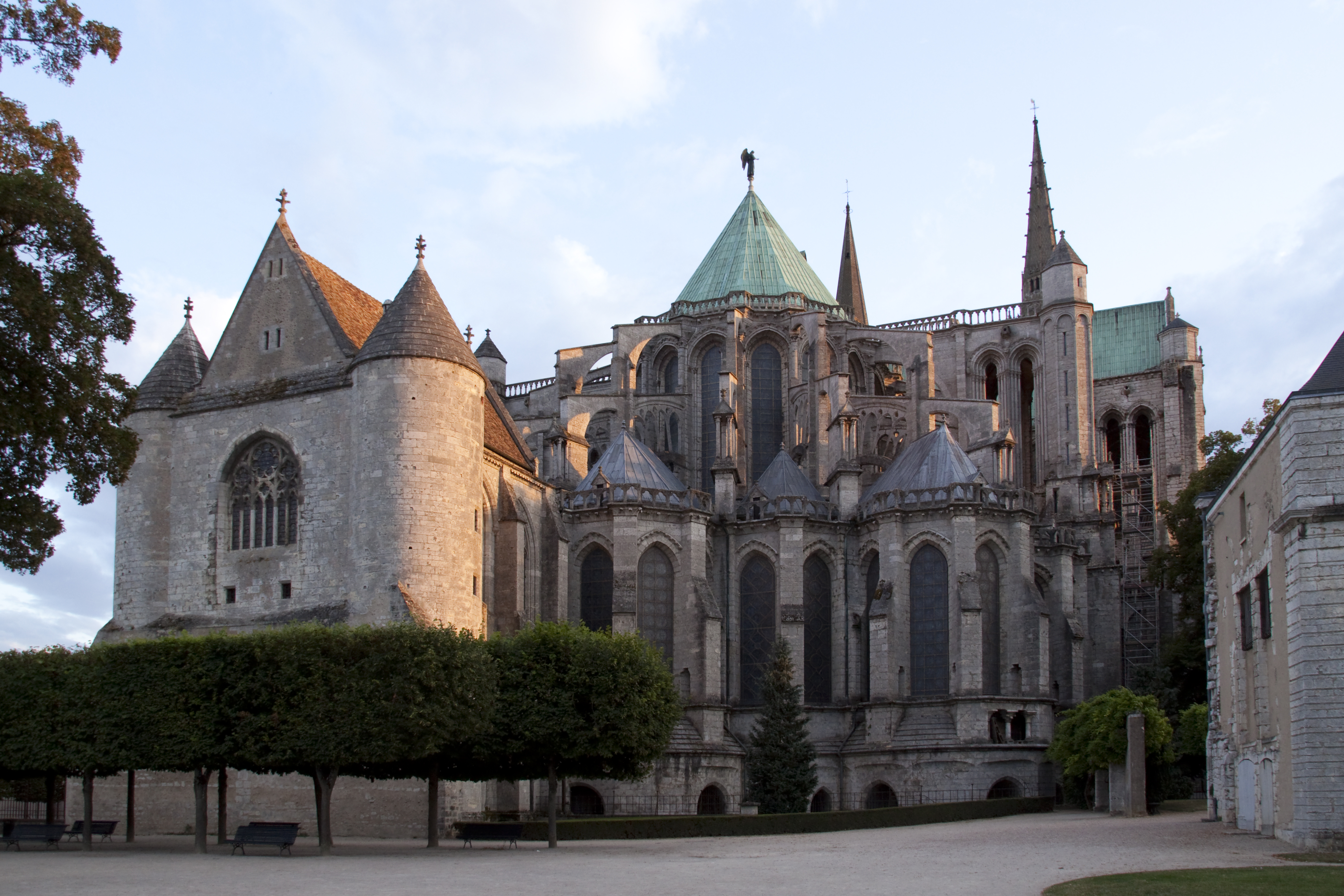 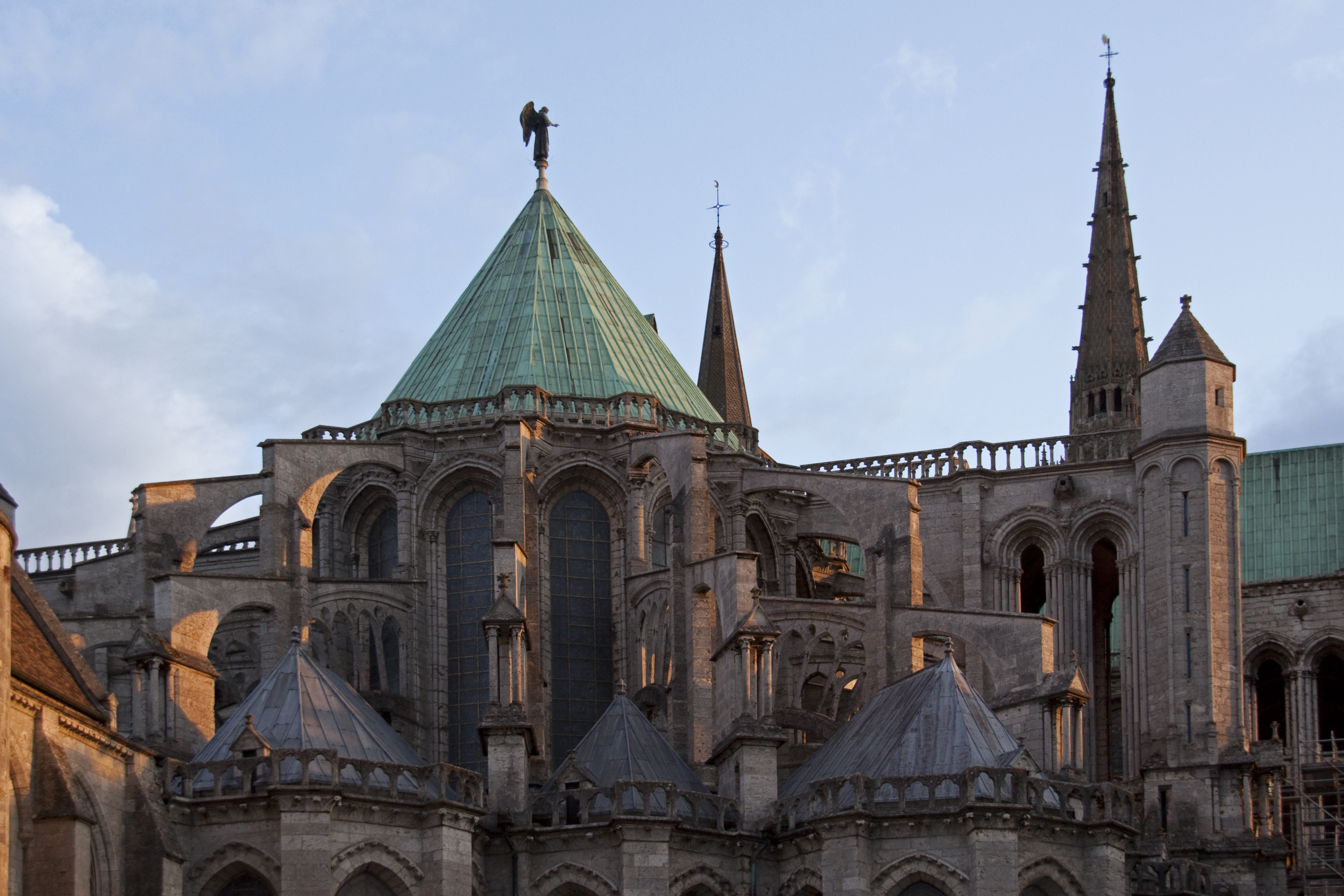 In comparison to Notre Dame, Chartres Cathedral is located in a rural context in the small town of Chartres, France. The scale of the cathedral is monumental compared to the context of the town. Though the church is completely different in scale, it was built of the same stone as many buildings the town of Chartres. This helps to relate the cathedral into context with the town. Chartres Cathedral is located on the Christian pilgrimage route, connected to a larger network of churches. People from distant areas would (and still today) travel along this route visiting many churches ending at Santiago de Compostela, Spain.

In comparison to Notre Dame de Paris Cathedral, the at Chartres Cathedral exudes a clear asymmetry through the towers (image 1). Though the horizontal tripartite is diminished compared to Notre Dame, the vertical tripartite is accentuated. Arches and openings are extended vertically pulling the churches taller and thinner than previous churches. As the Gothic continues, the churches and master masons are competing to become bigger and taller, further emphasizing dematerialization. Compared to Notre Dame de Paris that is 108 feet tall, Chartres is 120 feet tall. The westworks include a , one of the most sculptural areas of the church located over the doorway, same as Notre Dame.

The floor plan is a paradigm of a Gothic church plan with a clear pronounced . The floor plan has all the same parts of a central open to providing circulation along the edges. The interiors focus towards the , the most sacred and hierarchical part of the Christian church, and usually where the altar is located. Located along the back wall of the apse at Chartres are , smaller rooms of hierarchy in a church (image 3). Chapels were considered more private areas of the church and many churches may have one or multiple chapels. The chapels often held important items such as artwork, smaller secondary altars or a , an object of significance to a religion. Chartres Cathedral houses the tunic of Mary, an important reliquary pilgrims would have visited.

The dematerialization is possible through many structural innovations working together. The is an arch, pointed in shape, reducing lateral thrust forces. The reduction of forces allows for wider and taller spans between structures. The is one of the most structural elements on the interior ceiling of the church (image 5). The builders thickened the structure where the forces were transferring most directly. Rib vaults appear as X’s on the ceiling. are bundles of columns. Piers gather structure from the form of a wall to increase the span between columns. are a structural exoskeleton transferring structural forces from interior to exterior further dematerializing interior structure (images 2 and 4).

At the end of the transepts is often a large, monumental circle-shaped window called a . The rose window is another way to increase light in the interior. is the thin carving of stone, holding the glass in place for either a rose window or clerestory.

Christian churches ideally are positioned with an organization related to cardinal directions. The apse end of the church is facing east for several reasons. The altar located in the hierarchy of the apse faced east towards Jerusalem and the Holy lands. There are exceptions where the idealized alignments are not possible. Secondly, orientation can be related to the sun.  The sunrise represented a renewal of the Christian faith embodied in these Gothic monuments. The apse faced east positioned towards the sunrise. The proliferation and scale of Gothic churches shortly after the transition into the first millennia inspired the population to believe in the faith, a quality achieved by Gothic buildings still today.

the entrance to a church

one of the most sculptural areas of the church, located over the doorway

the crossing arm of the church perpendicular to nave

large central area of a church, where the congregation is seated

most sacred and hierarchical part of the Christian church, usually where the altar is located. The apse, with few exceptions, faced east towards Jerusalem.

smaller rooms of hierarchy in a church

an object of significance of a religion

lowest horizontal band of the interior façade. The arcade are the side aisles extruded in elevation.

middle horizontal band of the interior façade. Triforium is characterized by repeated iterations of three, symbolizing the Trinity.

the top most horizontal band of the interior façade. Clerestory is one of the most dematerialized areas of the structure with the largest amount of glass. This area allows the most amount of light to enter through the clerestory.

inspiring a feeling of awe, could be by scale, function or effect.

an arch, pointed in shape, that reduces lateral thrust forces. The reduction of forces allows for wider and taller spans between structure.

bundles of columns. Piers gather structure from the form of a wall to increase the span between columns.

a large circular window, often decorated with stained glass windows. Rose windows are located on the ends of the transepts, sometimes on the westworks also.

thin carving of stone, holding the glass in place for either a rose window or clerestory

Exploring Architecture and Landscape Architecture by Aimee Moore is licensed under a Creative Commons Attribution-NonCommercial 4.0 International License, except where otherwise noted.