The most consistent initial clinical feature of MPGN is the presence of moderate to marked proteinuria (typically UPC > 2); however, the constellation of clinical findings is often more severe in dogs with MPGN vs. other categories of glomerular disease, with azotemia and hypertension often being present. Rare cases can have a UPC as low as 0.5.

MPGN may be associated with infections, such as Leishmaniasis and Lyme nephritis.

Dogs <1 year of age are unlikely to have MPGN.

Beagles have been reported to have familial MPGN.

COMMENTS REGARDING THE MEMBRANOPROLIFERATIVE PATTERN 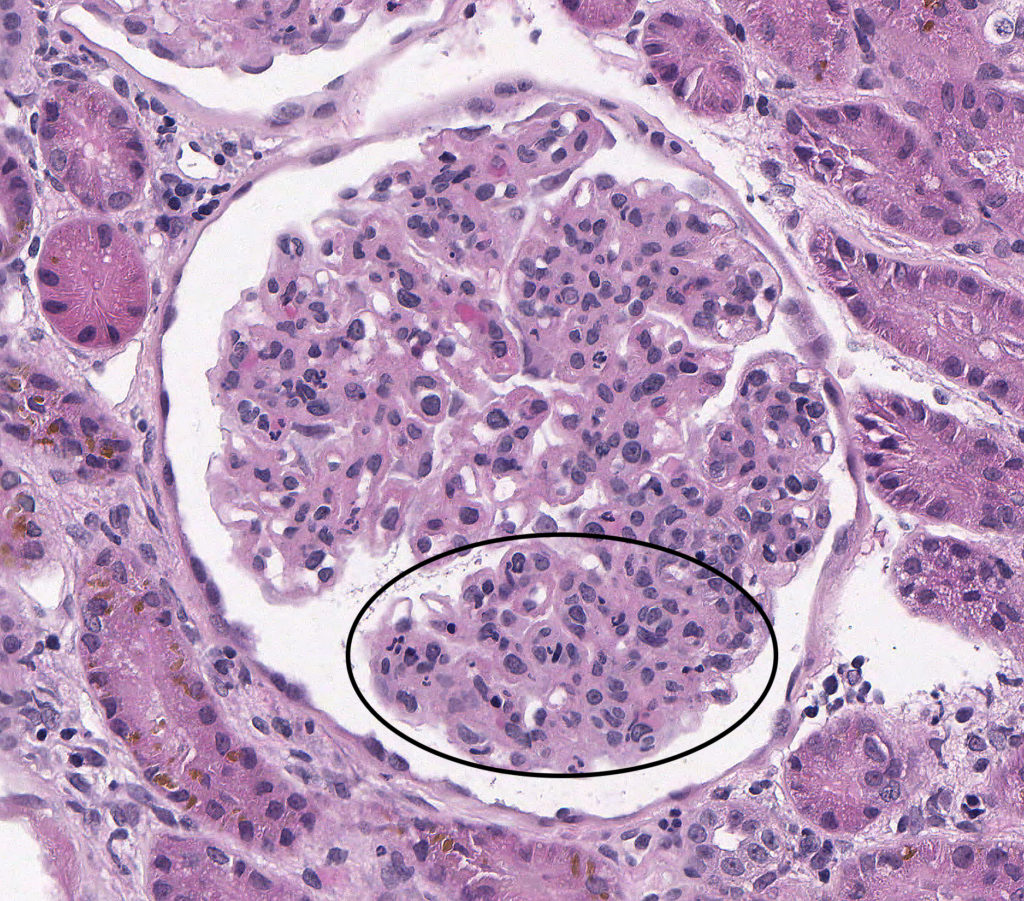 FIG.1A (HE): Active MPGN: Capillary lumens are frequently narrow or indistinct due to increased cellularity which includes endothelial hypertrophy as well as many circulating neutrophils (circled). 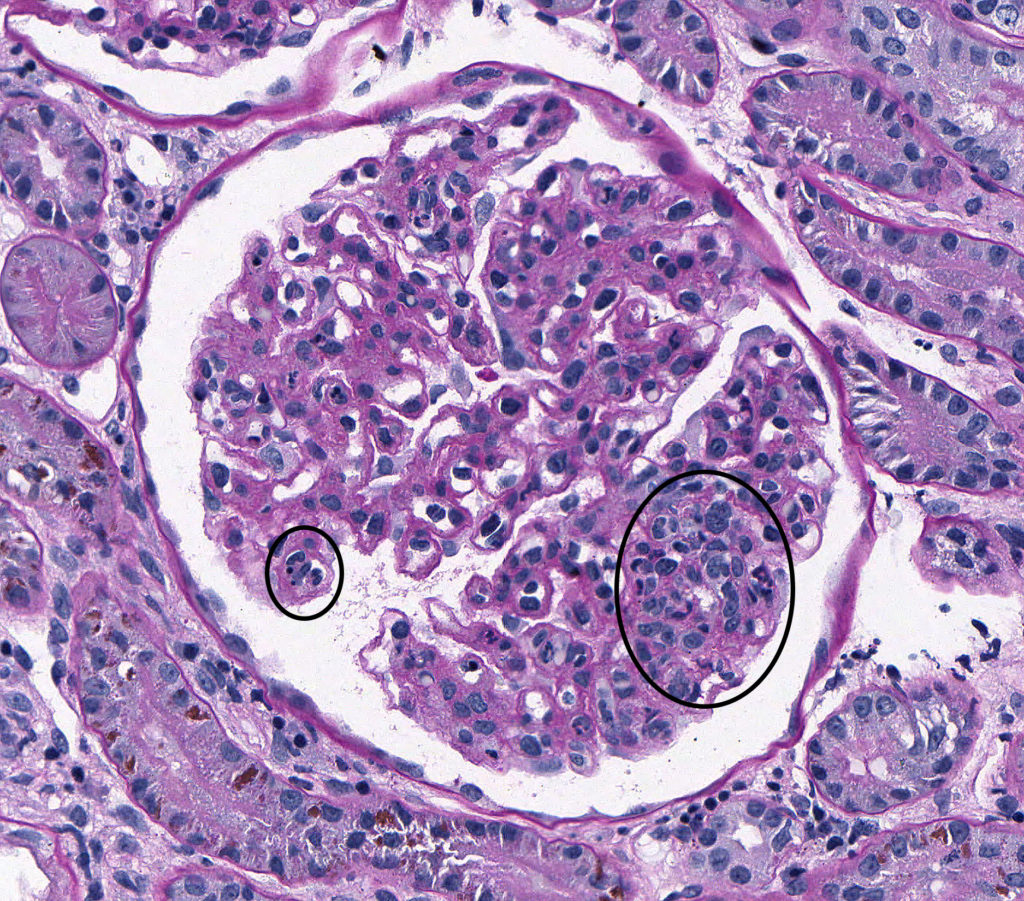 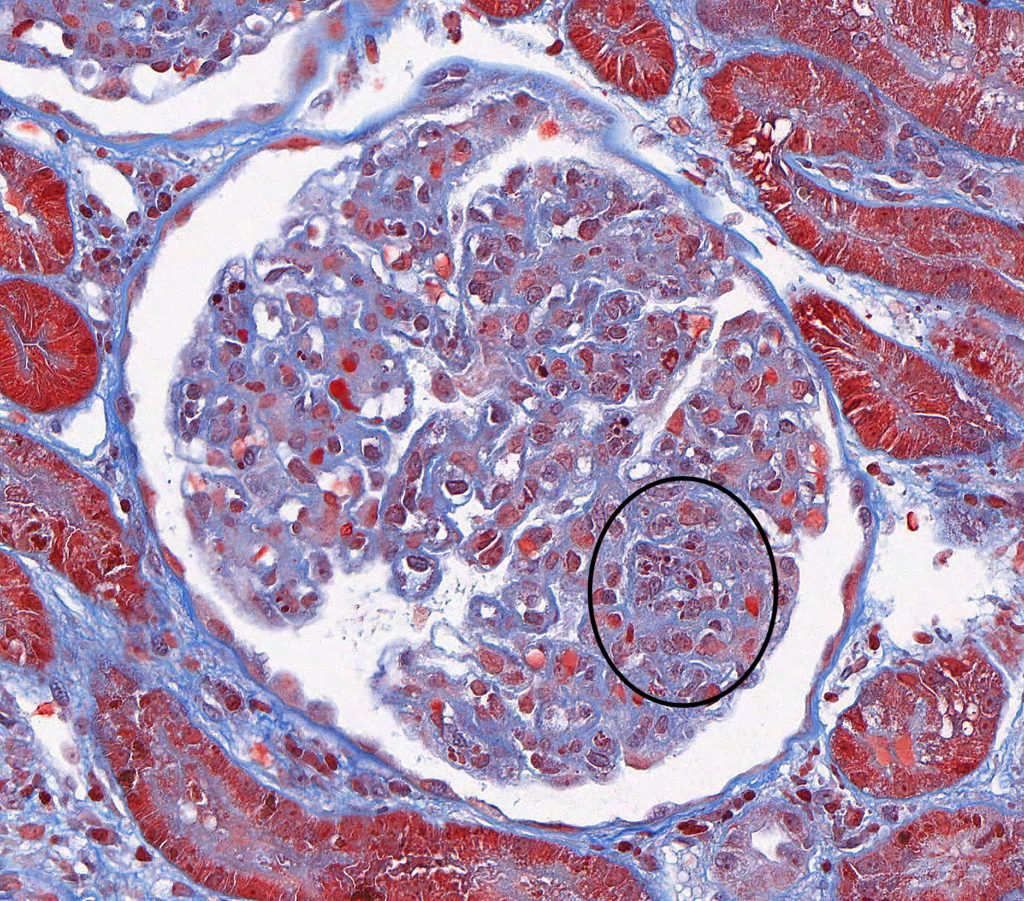 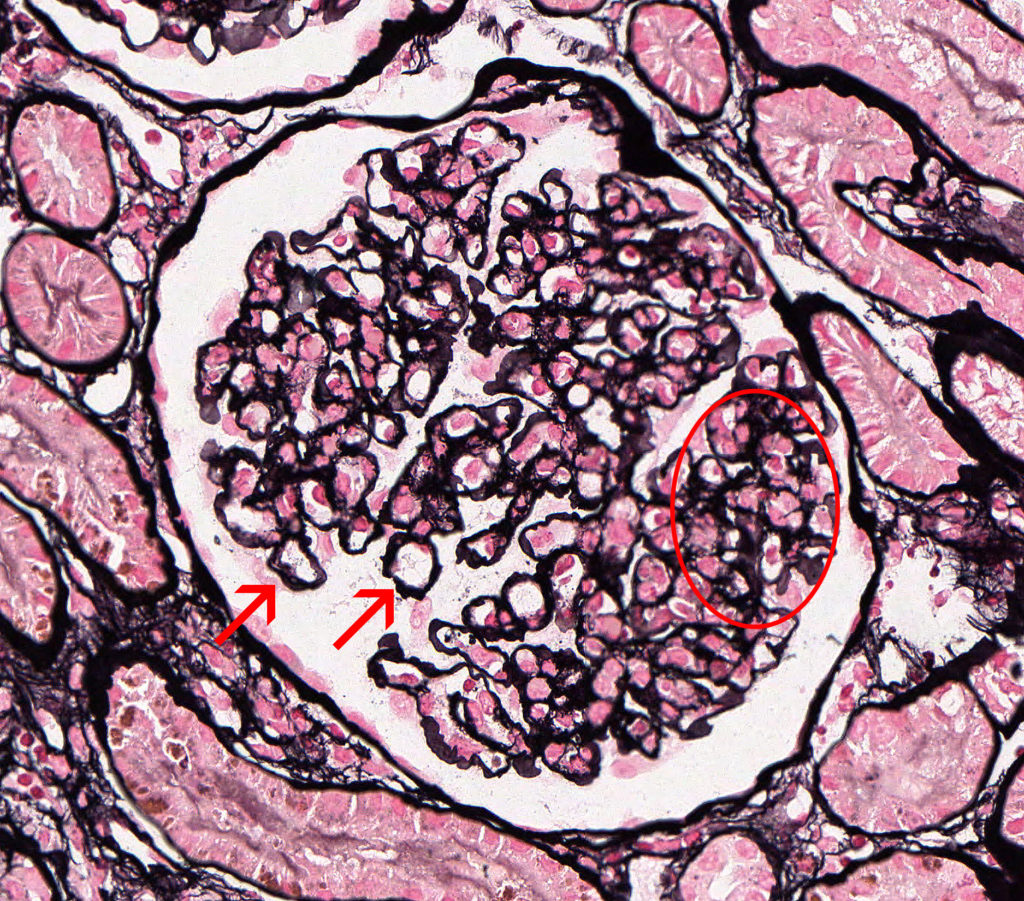 FIG.1D (JMS): Active MPGN:  In addition to hypercellularity (circled), the JMS stain shows segmental GBM remodeling which is characterized by uneven inner and outer contours of the GBM (arrows). 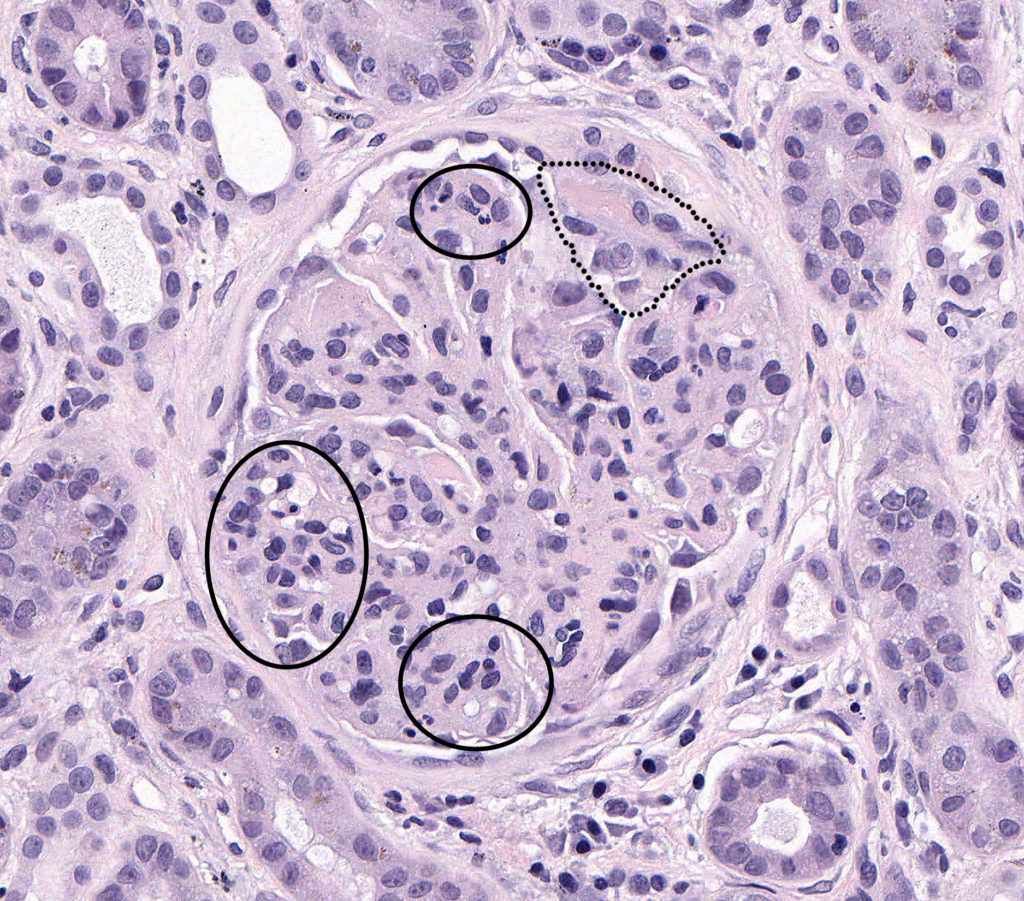 FIG.2A (HE): Chronic-active MPGN: There is global hypercellularity (circled), thickening of the GBM, a crescent within Bowman’s space (outlined) and synechiae. 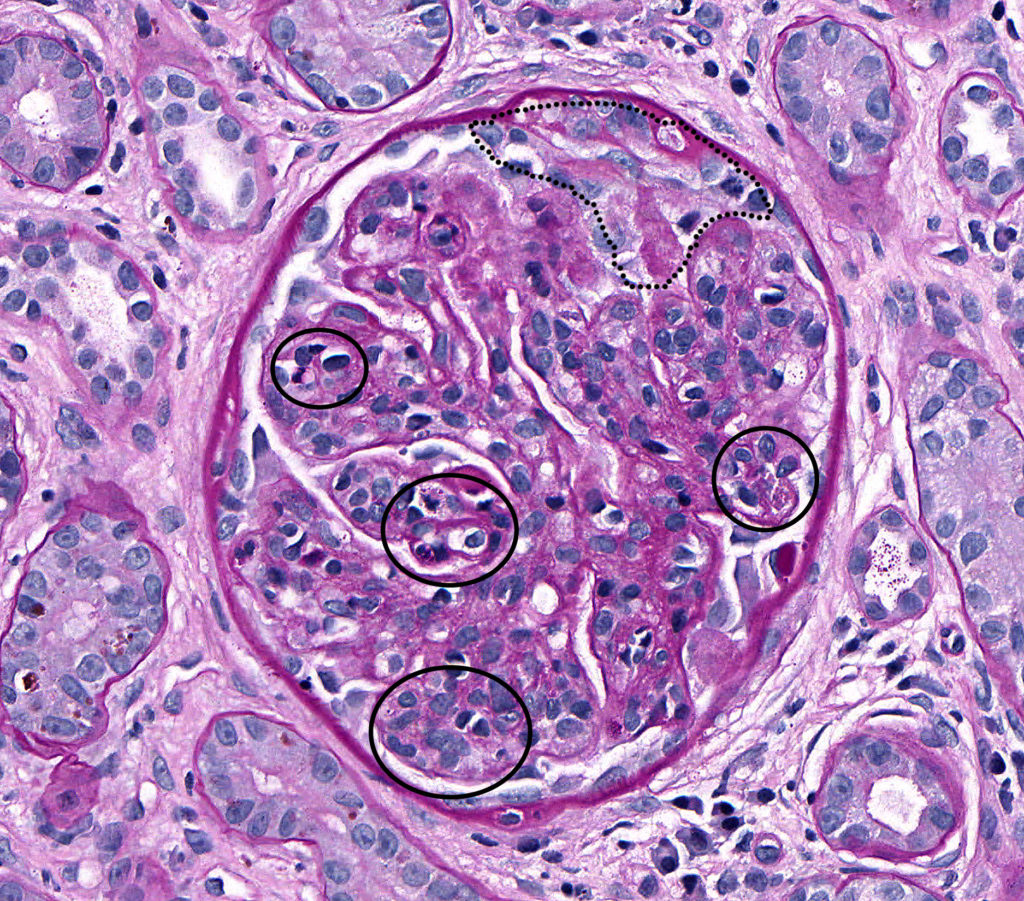 FIG.2B (PAS): Chronic-active MPGN: Global hypercellularity (circled), in both the endocapillary and mesangial compartments, accentuates the lobules of this glomerulus (i.e. glomerular lobulation) resulting in a clover-leafed appearance.  Additionally there is a crescent characterized by segmental epithelial hypertrophy and mononuclear inflammatory infiltrates within Bowman’s space (outlined). 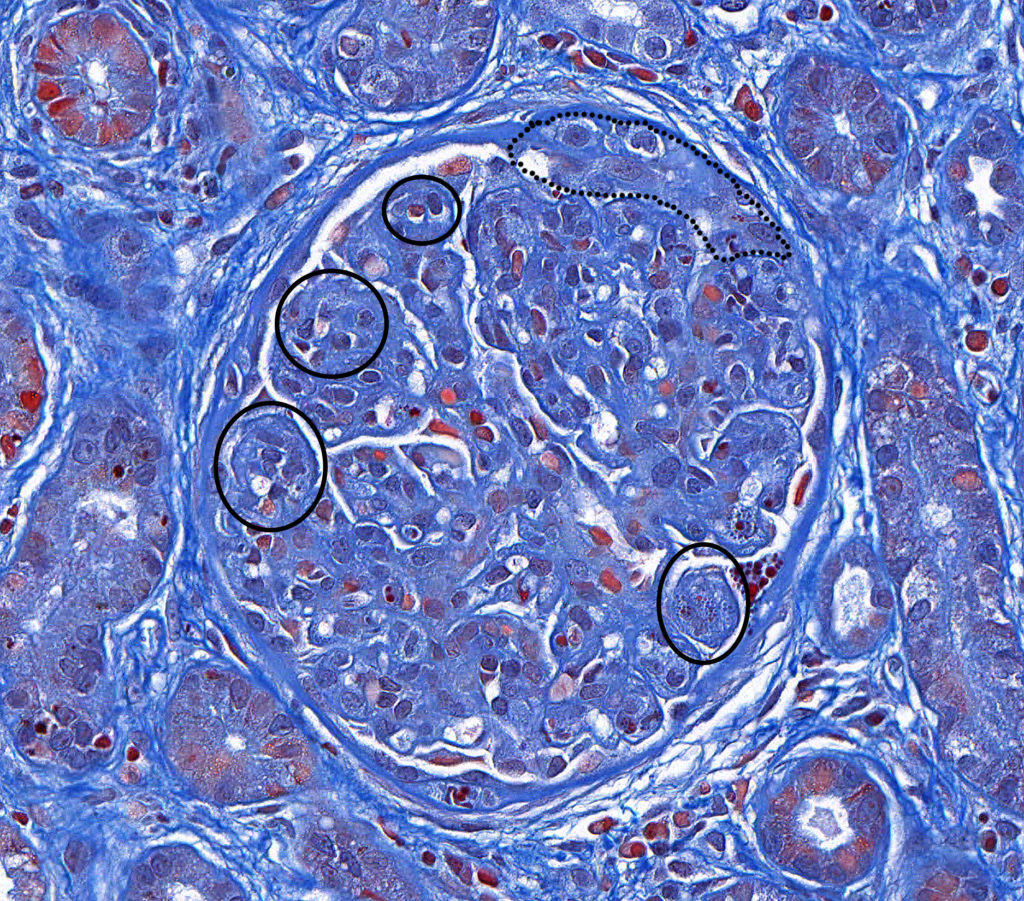 FIG.2C (MT): Chronic-active MPGN: The trichrome stain highlights the hypercellularity (circled) resulting in a lobular appearance of the glomerulus.  The crescent is outlined.  There is also periglomerular fibrosis, indicative of chronic injury.  The generalized blue color in this particular case is likely a result of variability of the staining technique. 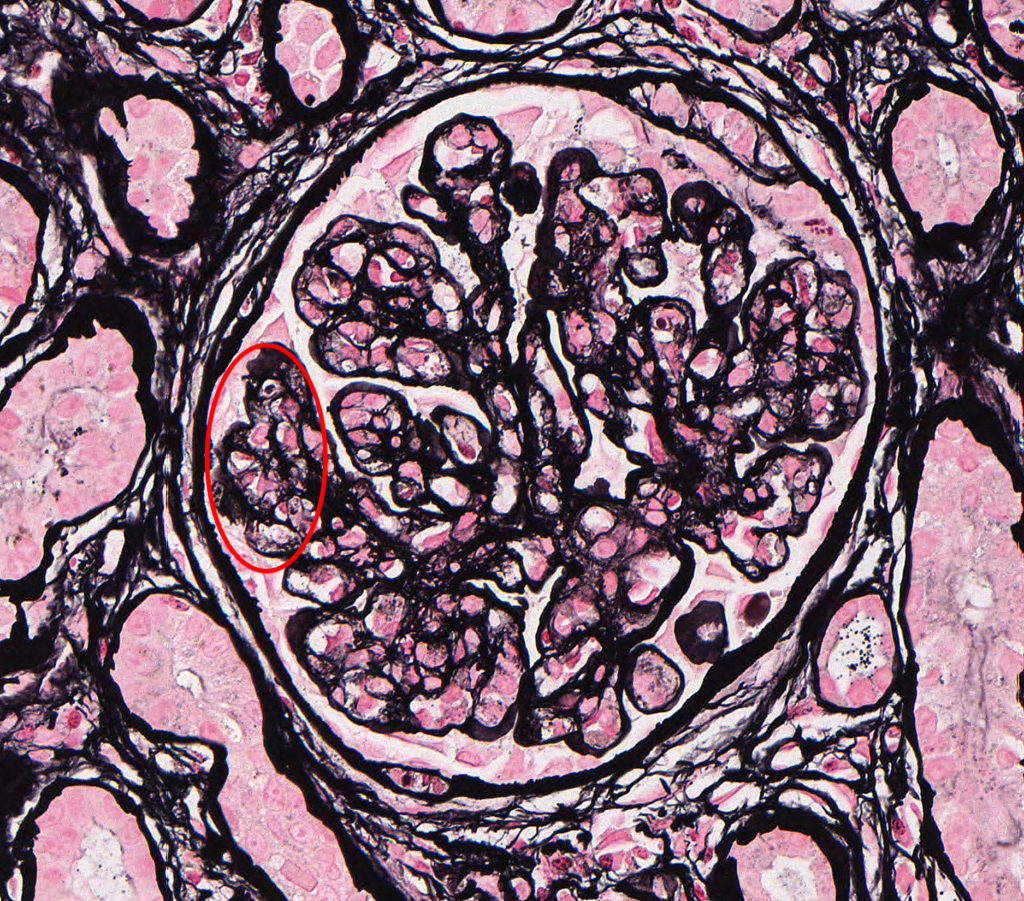 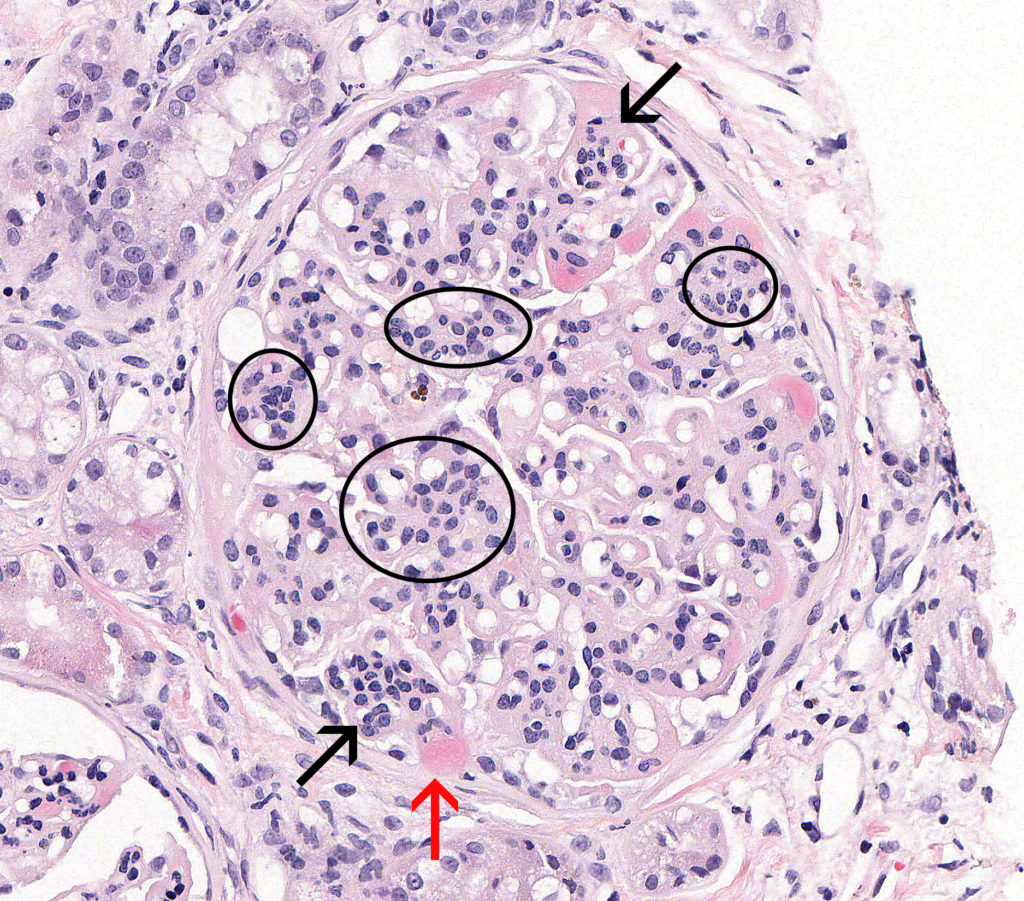 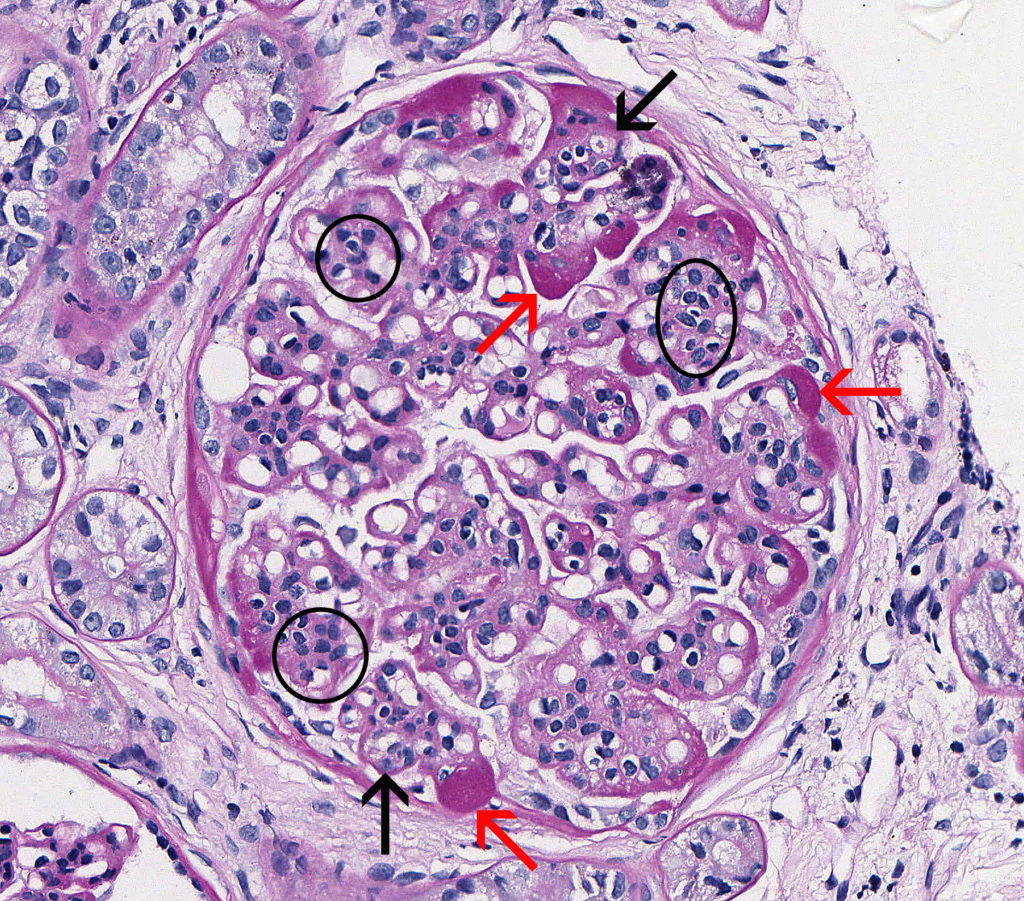 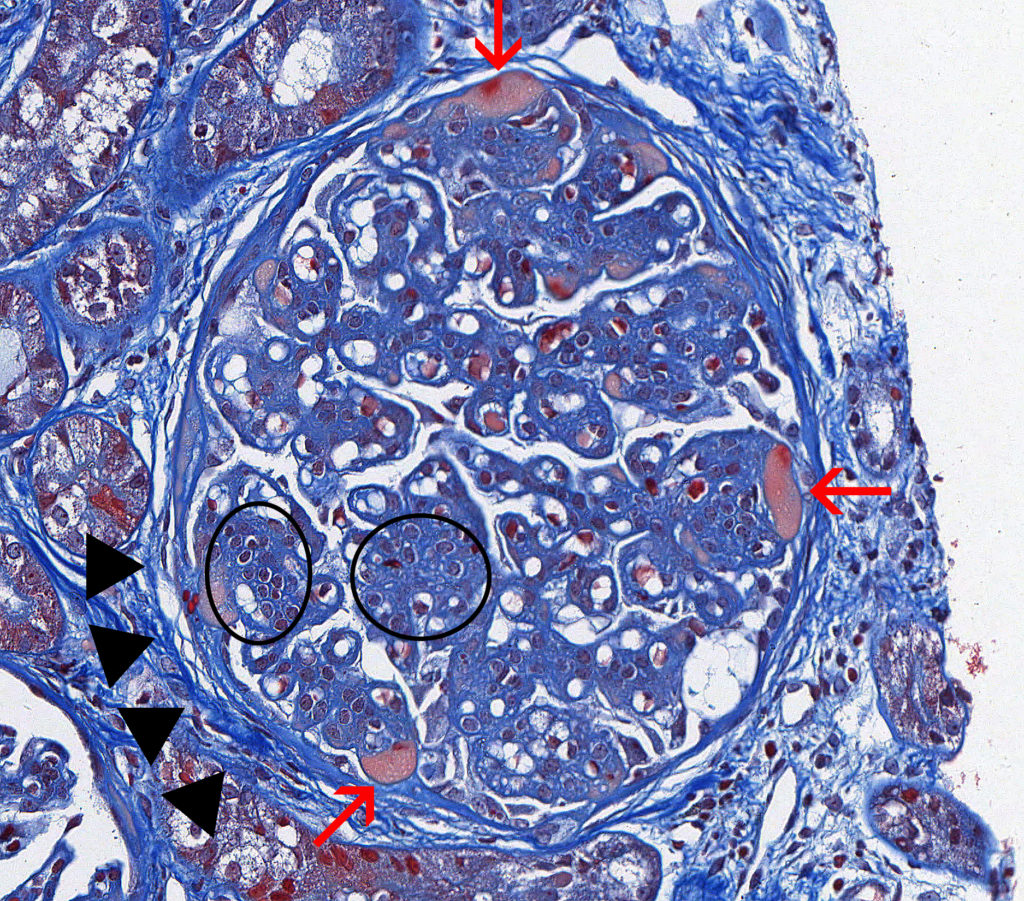 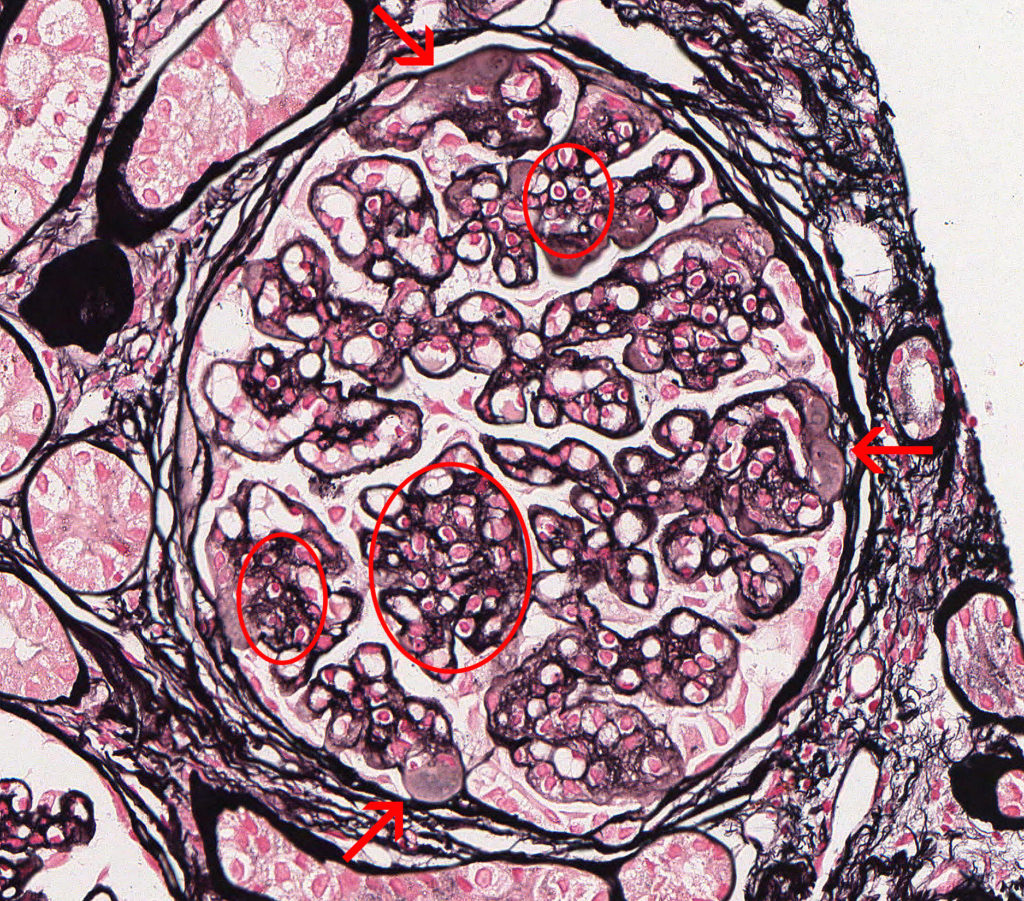 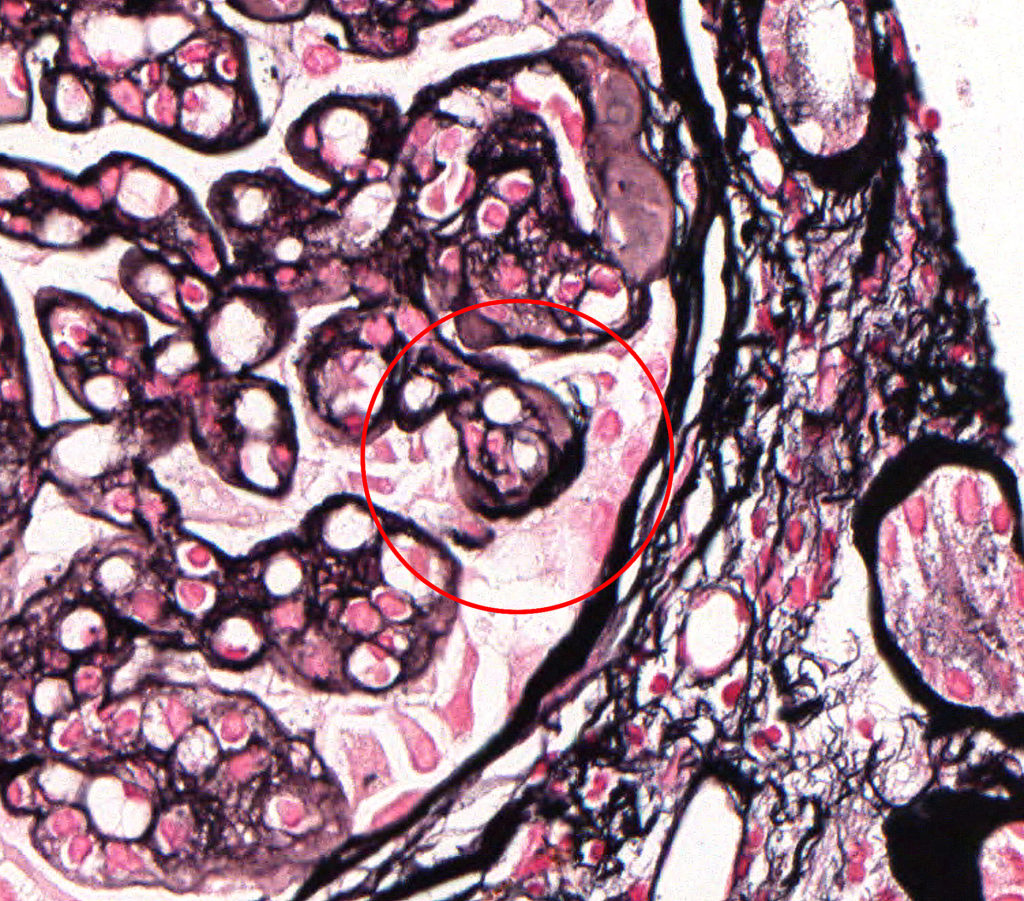 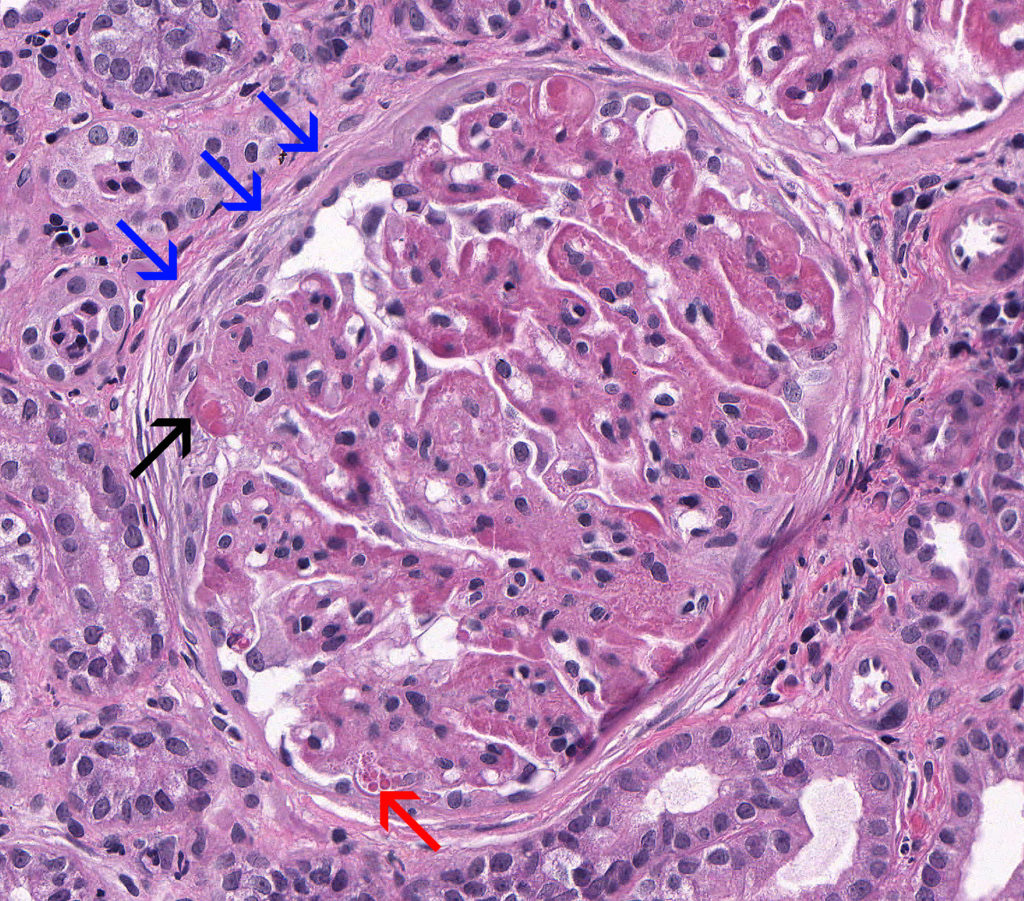 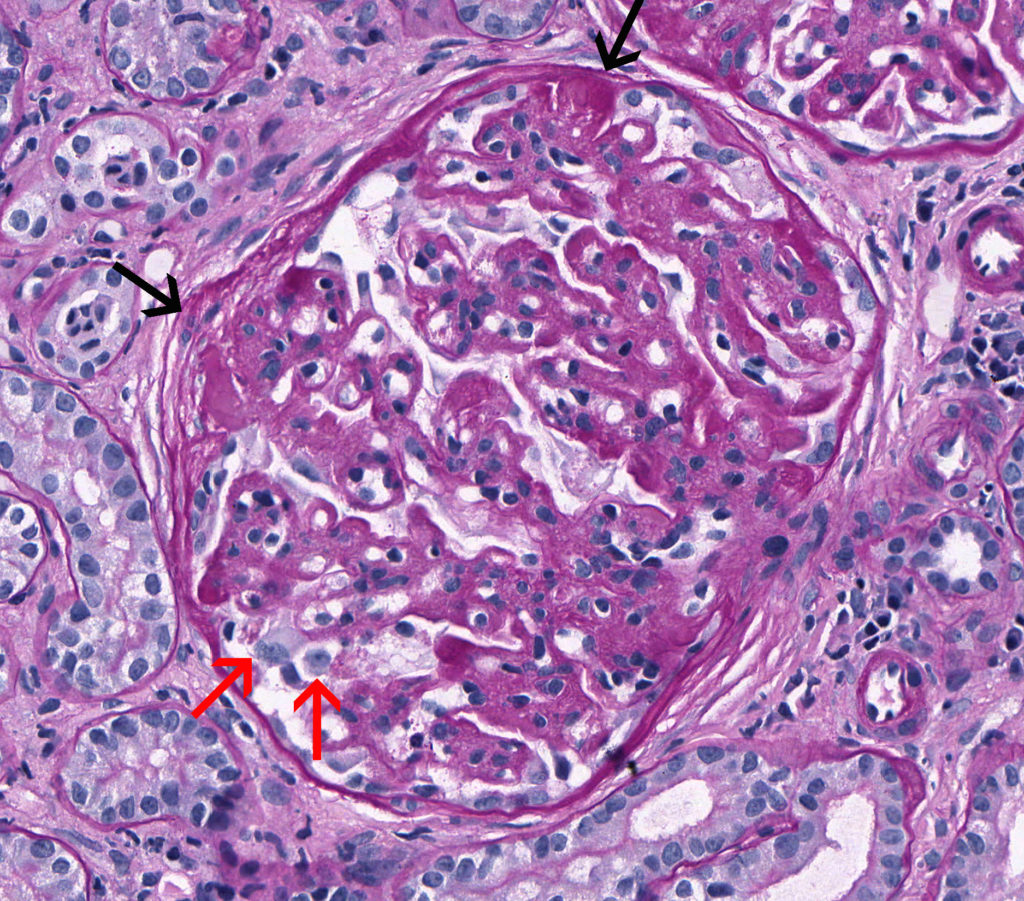 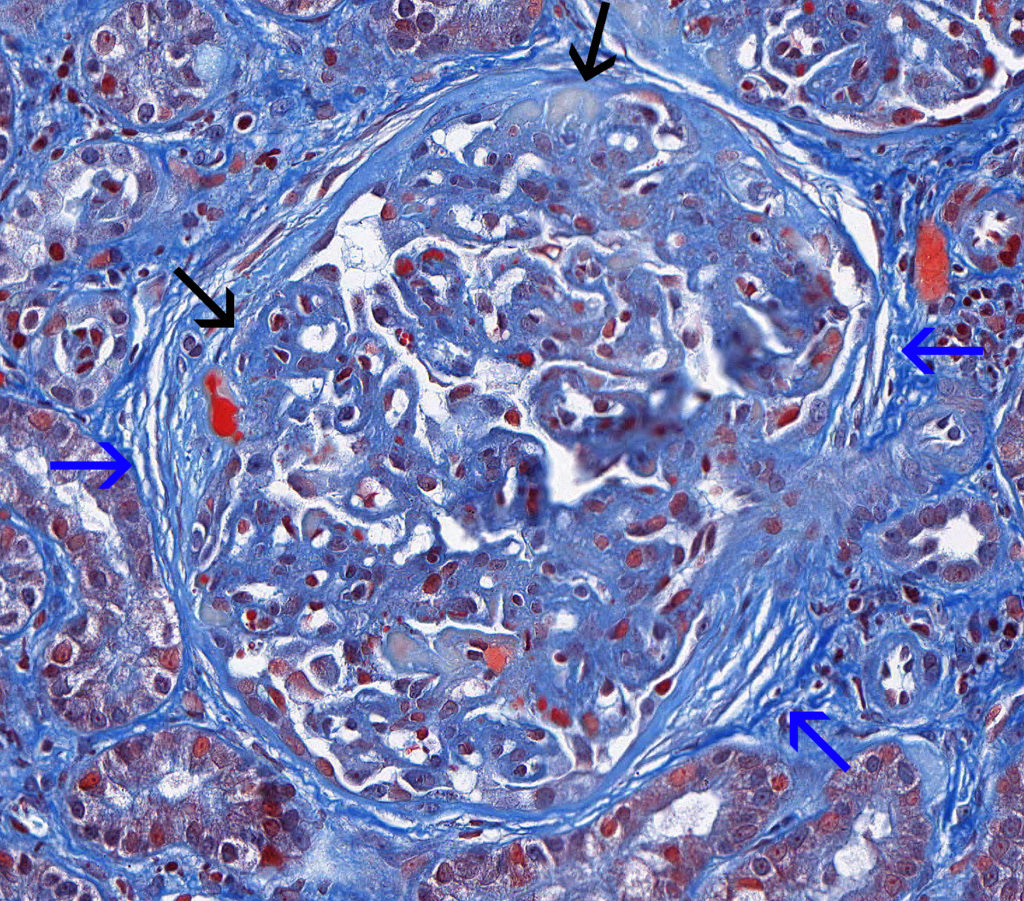 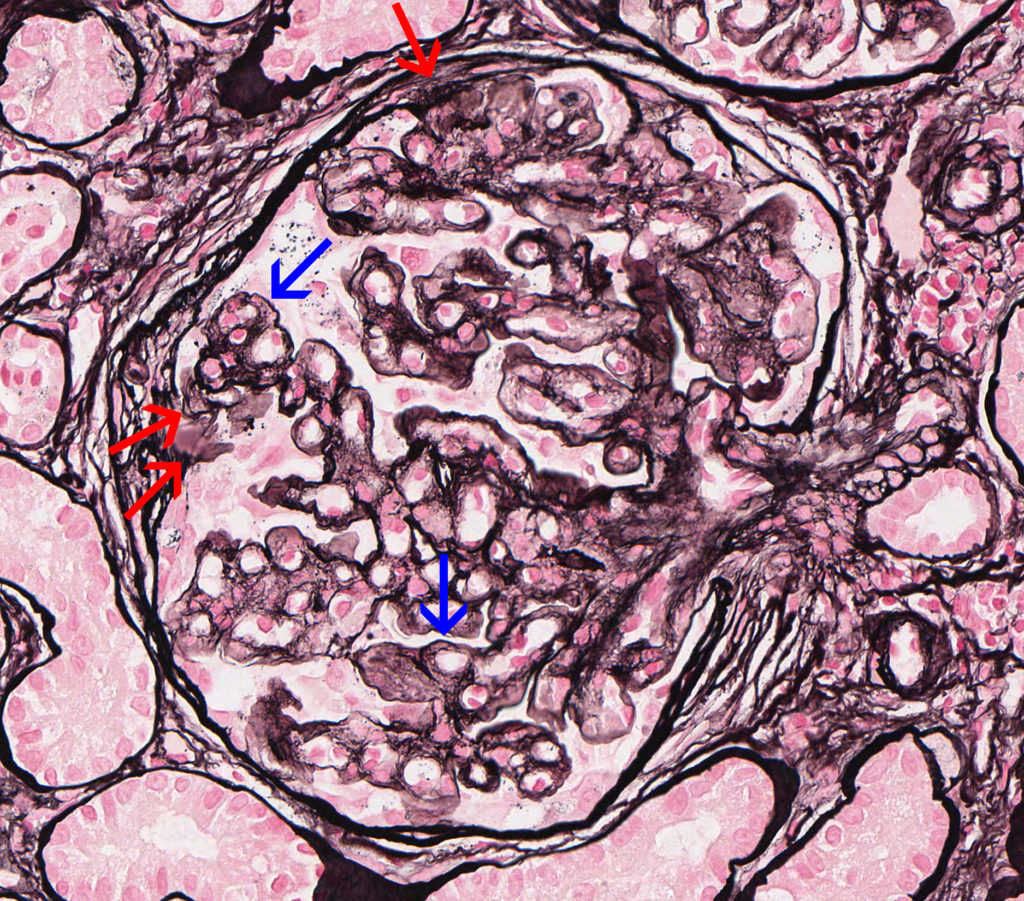 Please note the glomerulus below is from the same dog presented in FIGURES 4A – 4D. 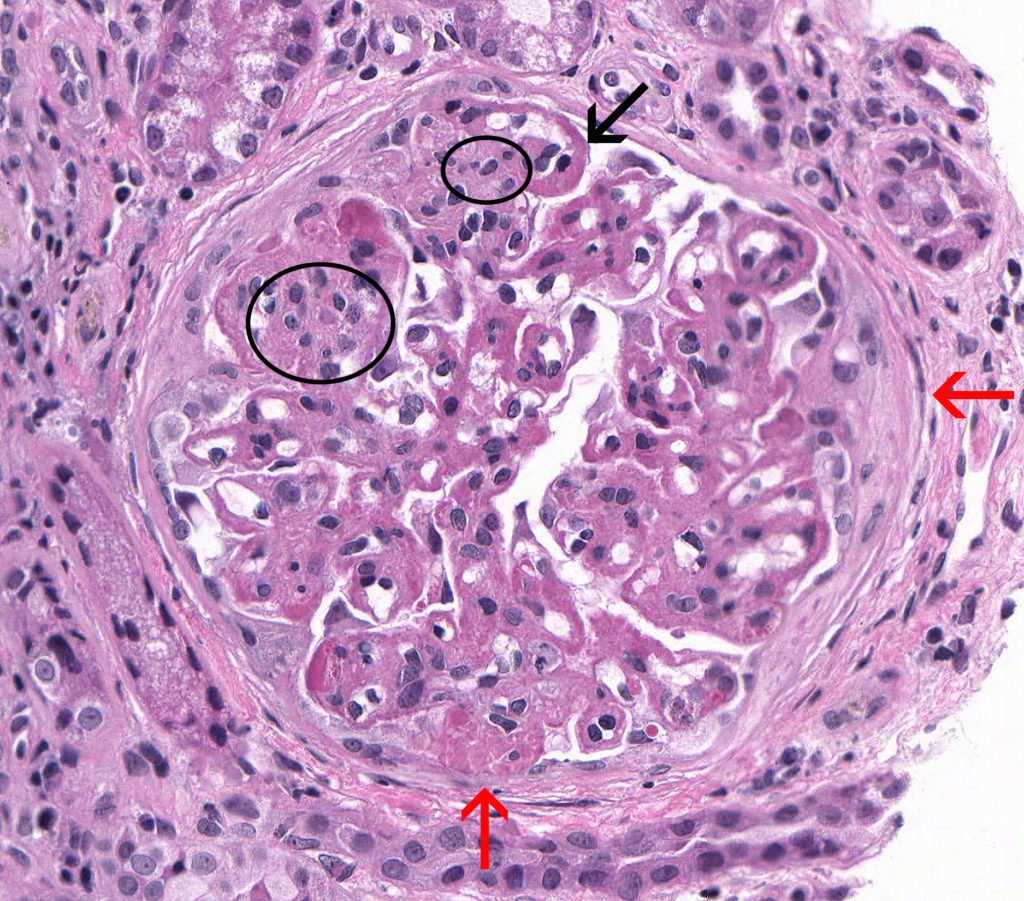 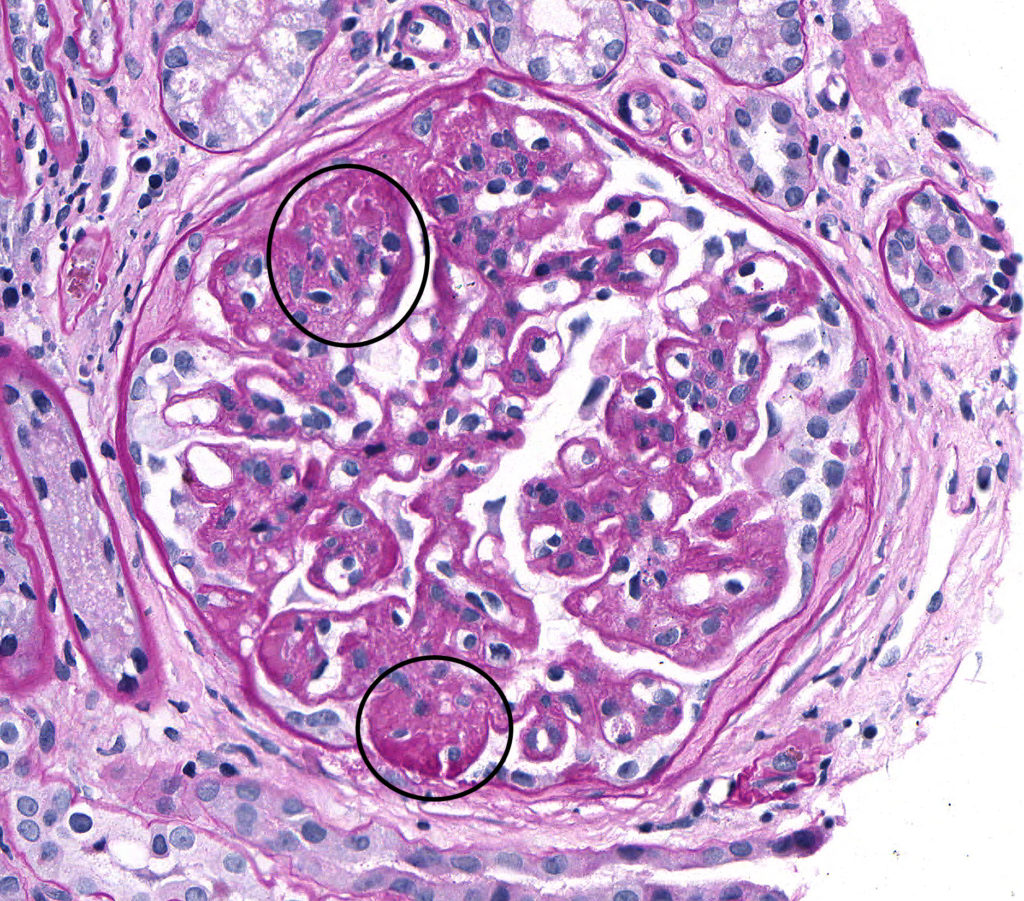 FIG.4F (PAS): Severe, chronic MPGN: There is GBM thickening and the mesangial matrix is segmentally expanded indicating irreversible sclerosis (circled). The hypercellularity is less prominent in this glomerulus. 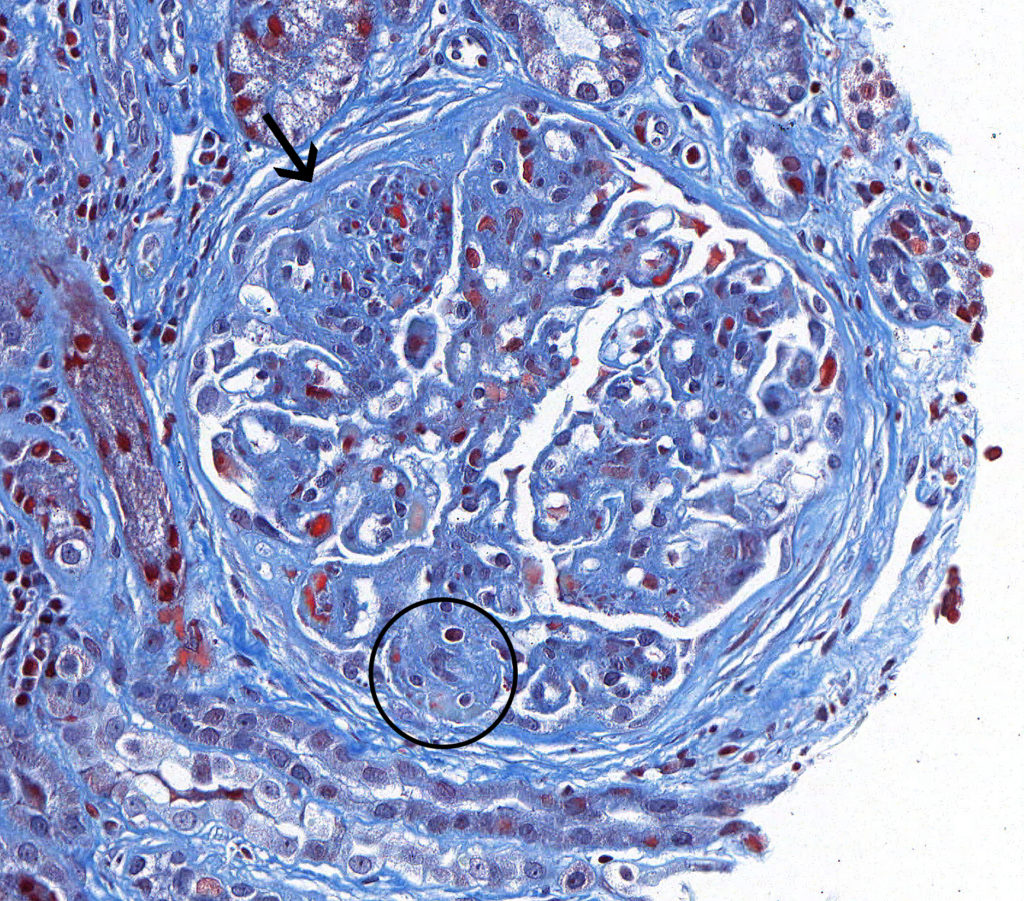 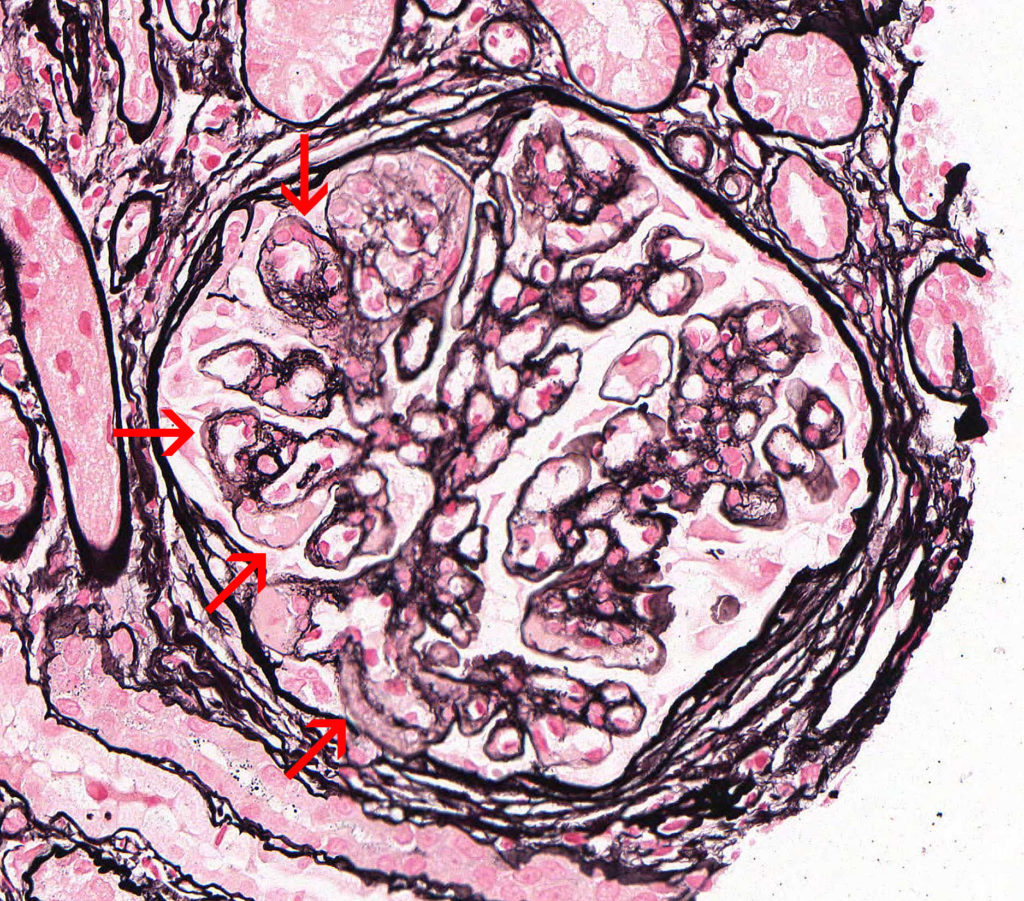 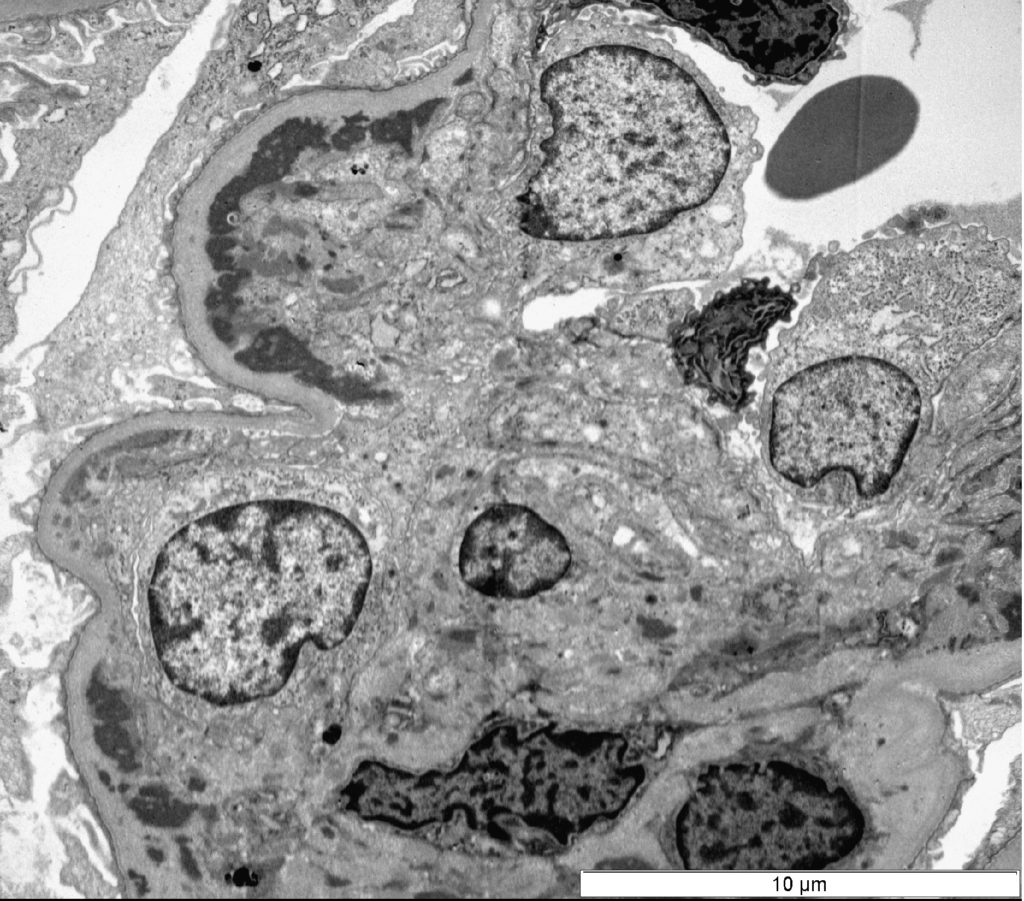 FIG.5A (TEM): Acute MPGN: There are subendothelial and mesangial electron dense deposits.  This segment of the glomerular tuft is hypercellular. 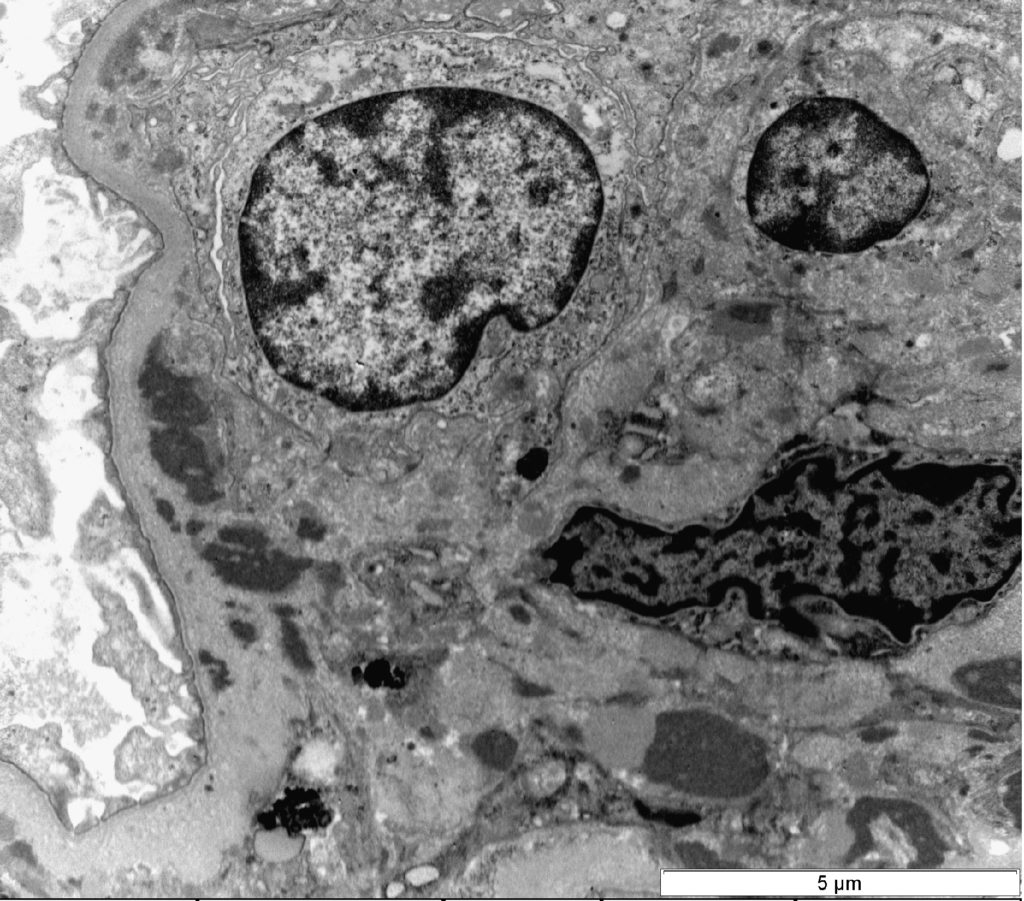 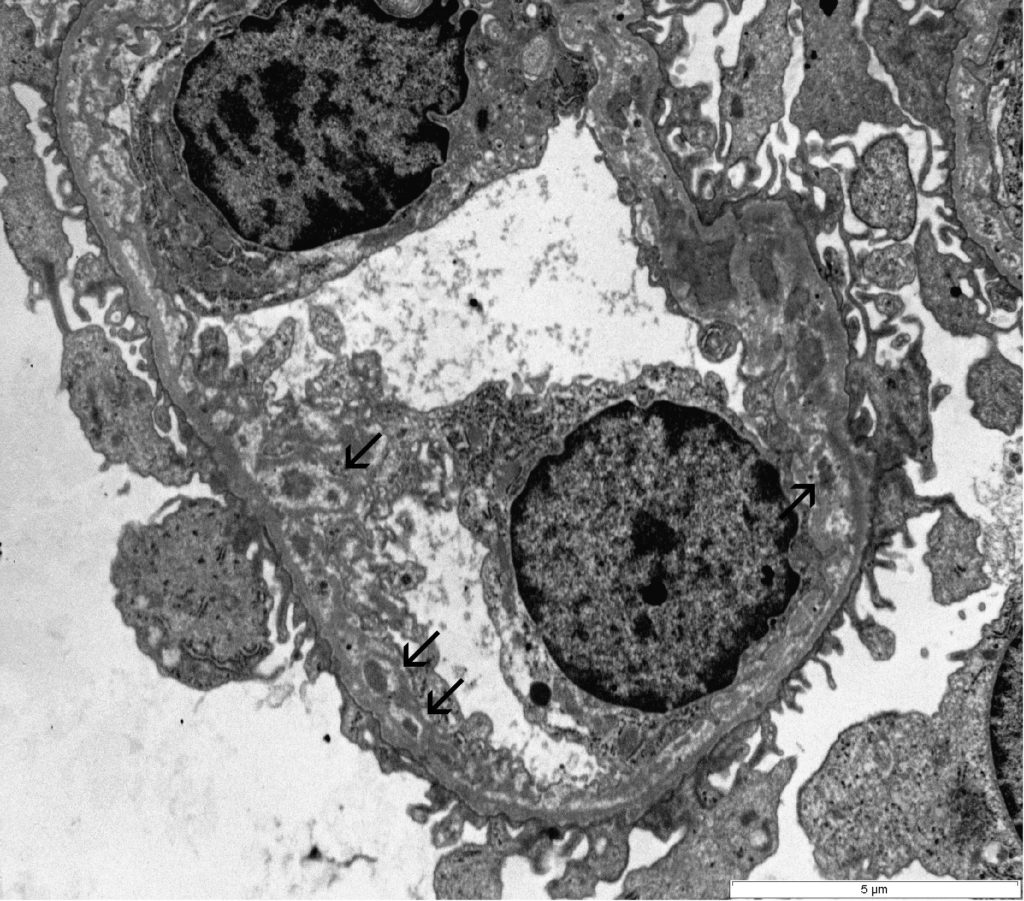 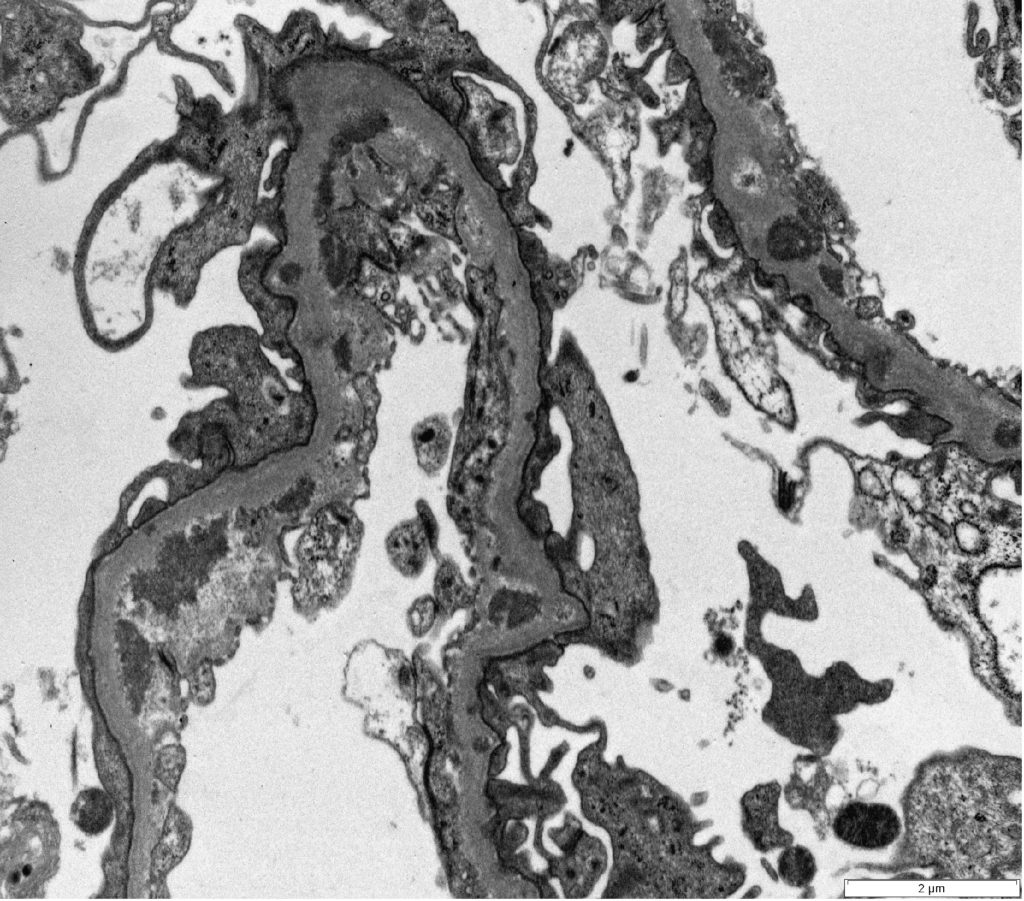 FIG.6C (TEM): These capillaries have many irregular electron dense deposits in a subendothelial location and global effacement of podocyte foot processes.

FIG.6D (TEM): Colorized version of above TEM image. These capillaries have many irregular electron dense deposits. They are on the subendothelial aspect of the GBM (green). There is global effacement of podocyte foot processes (pink). Endothelial cells have lost their fenestrae (yellow). 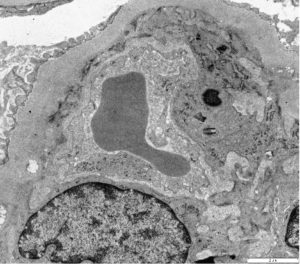 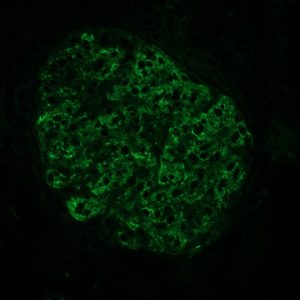 FIG.8A (IF for C3): There is strong granular labeling along capillary loops and in mesangial zones. 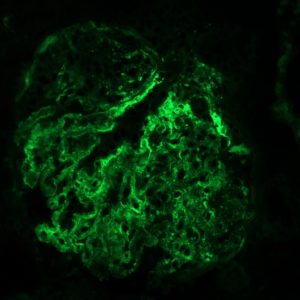 FIG.8B (IF for LLC): There is strong granular labeling along capillary loops and in mesangial zones.