In addition to the common causes of proteinuric kidney disease in dogs, there are other patterns of glomerular injury that are rare or insufficiently characterized.  With time, we hope to develop standardized criteria for diagnosis of these diseases and better understand their pathogeneses.  Some of these diseases still have clinical features based on what we have gleaned from our database of cases, whereas the rarity of other diseases have precluded our ability to report the relevant clinicopathologic data.

Cases with mesangial expansion and / or hypercellularity without identifiable immune complex deposits should be given a descriptive diagnosis of “Glomerulopathy characterized by mesangial cell proliferation.” 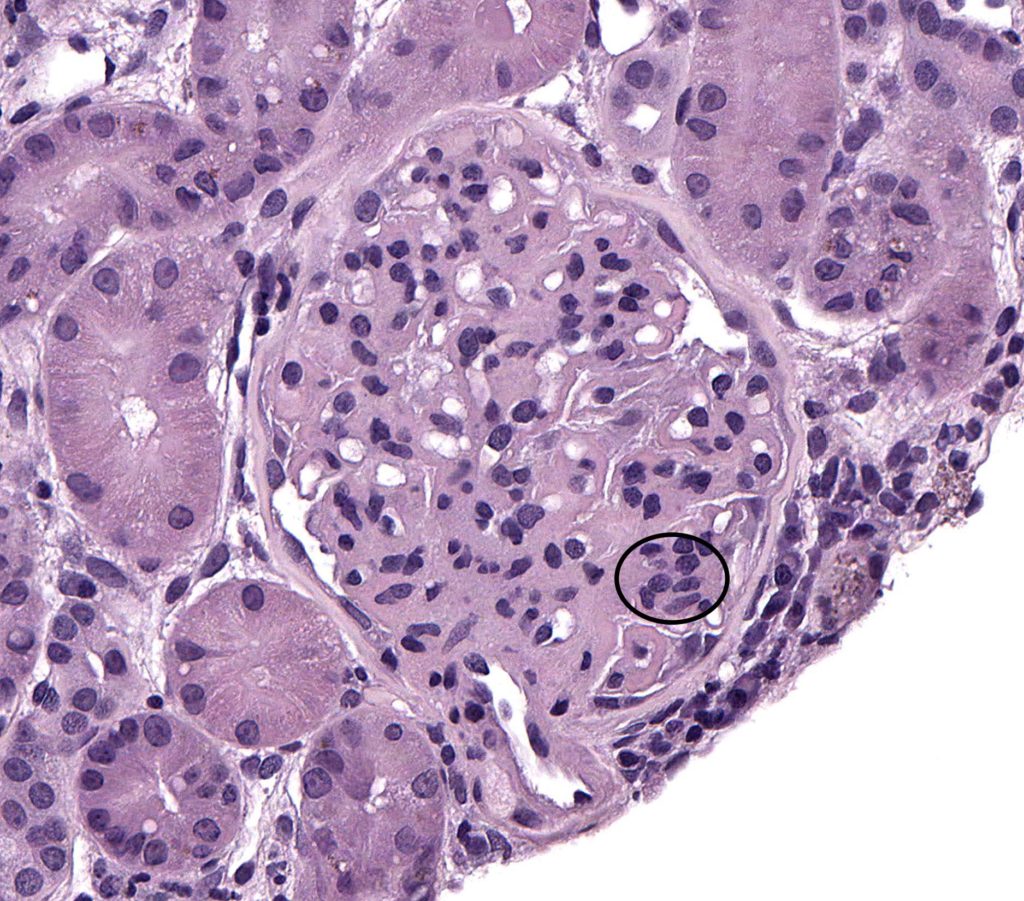 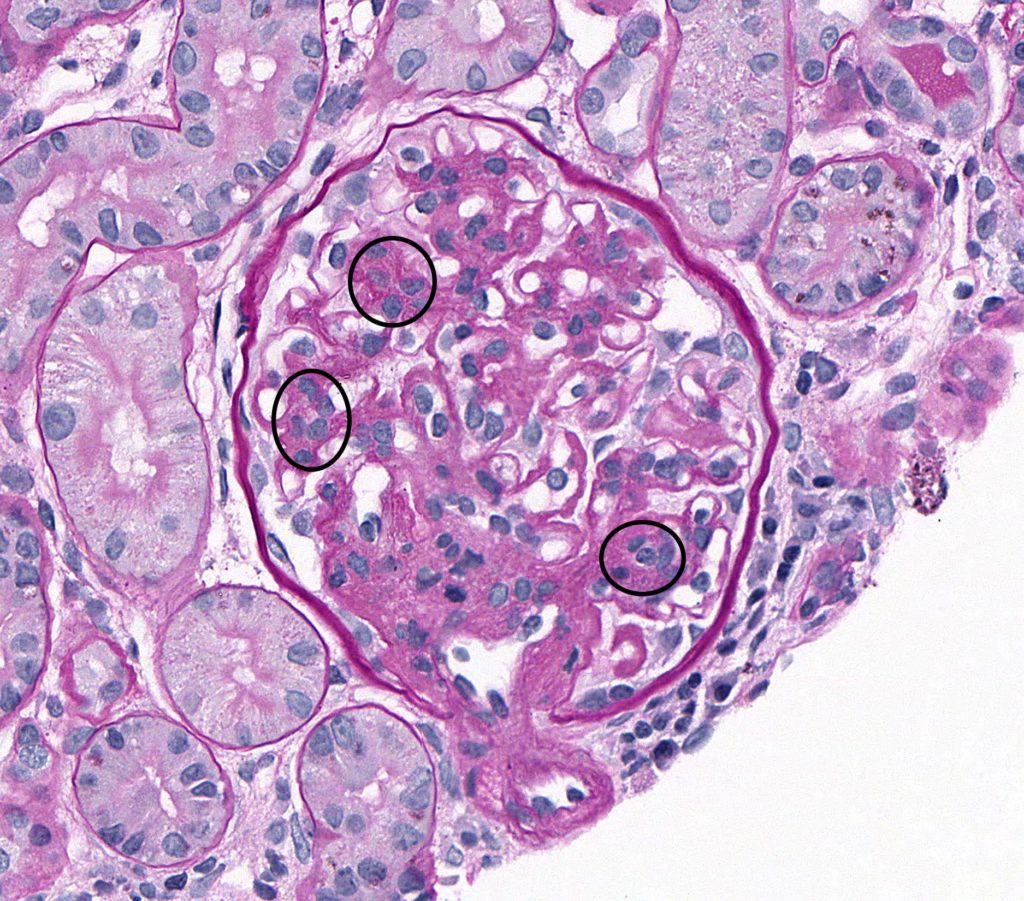 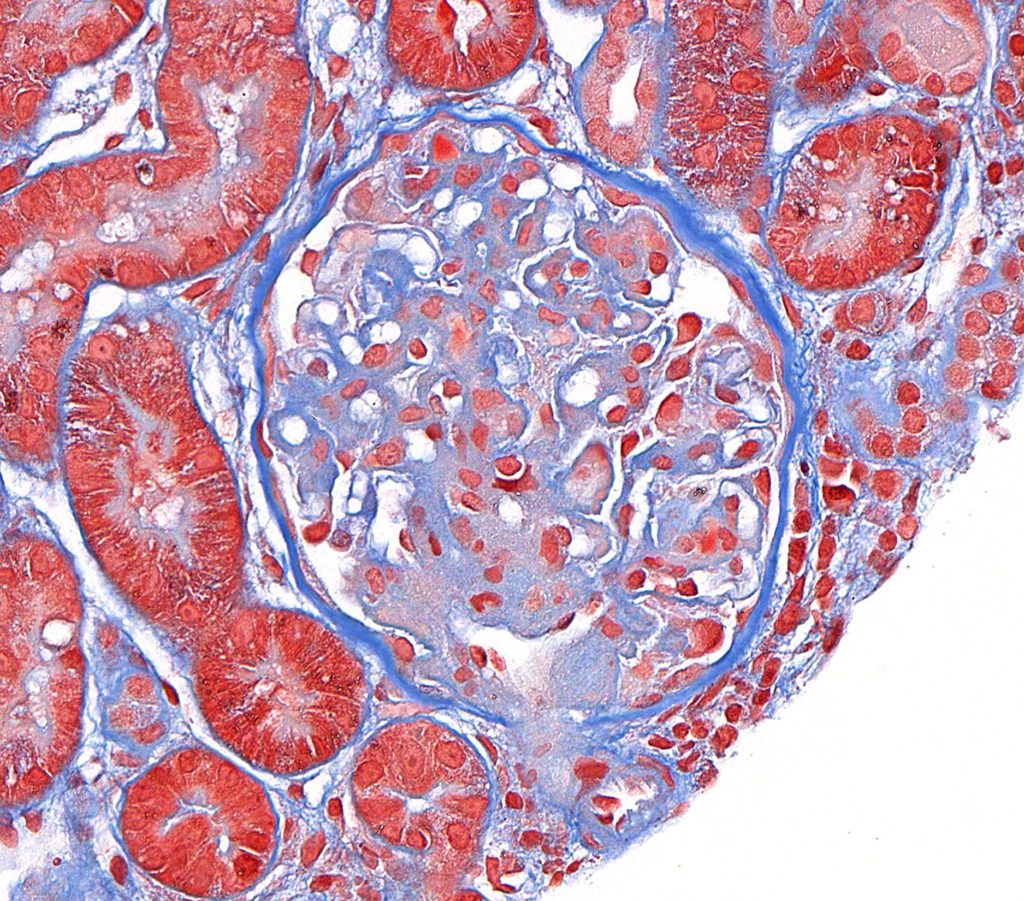 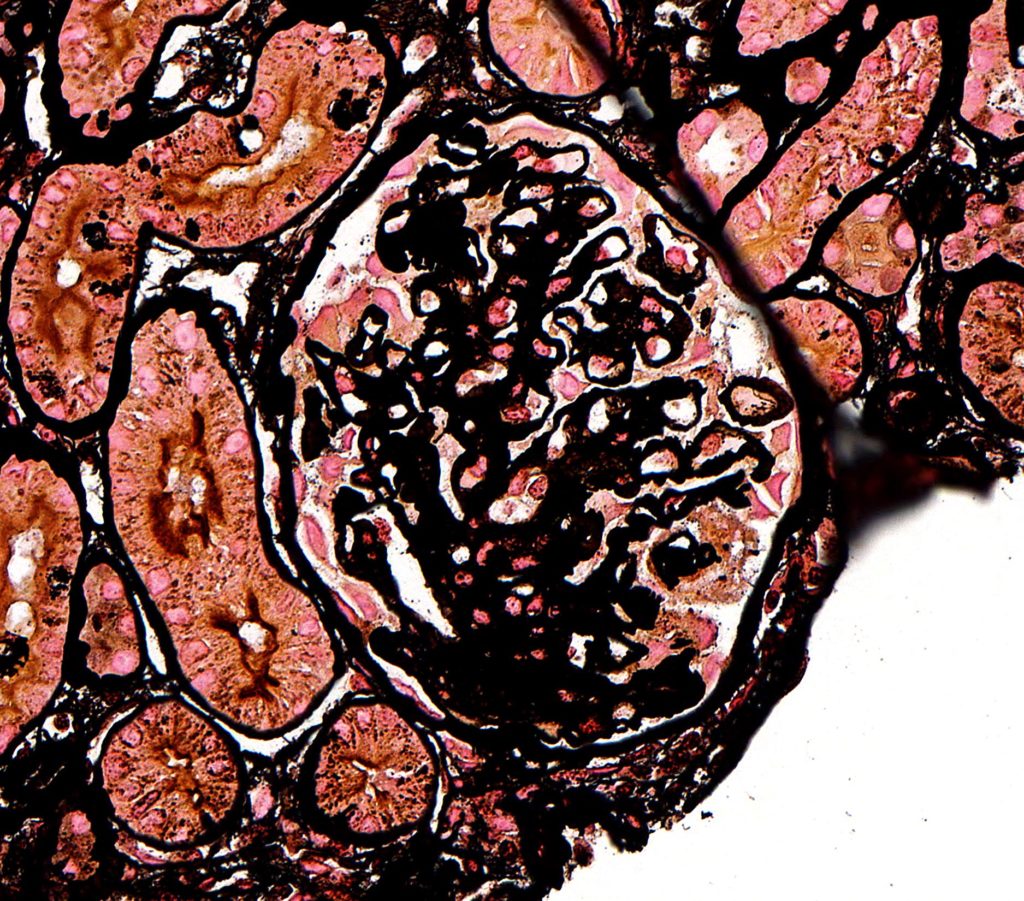 FIG.1D (JMS): The GBM is irregularly thickened. Please note that this JMS stain is dark due to prolonged time in silver. 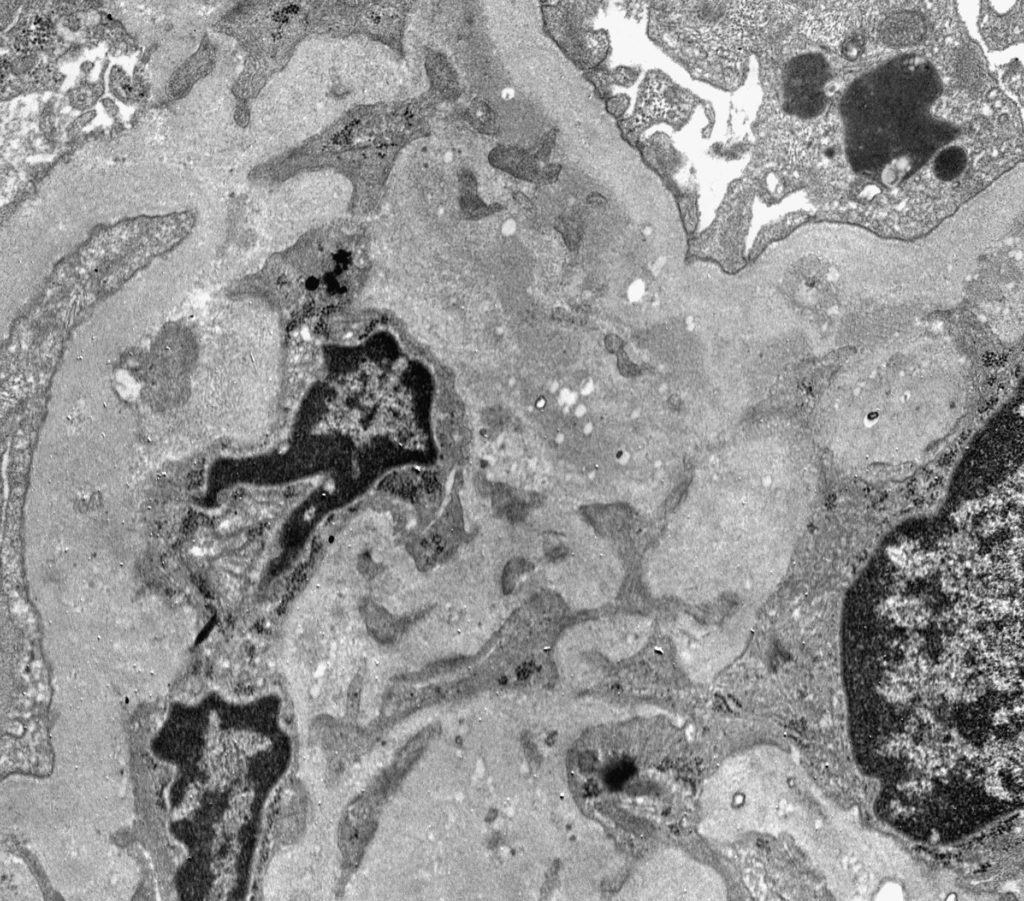 FIG.1F (TEM): Colorized version of above TEM image with electron dense deposits (black) between the mesangial matrix (blue) and the paramesangial GBM (green).  The podocytes are pink. 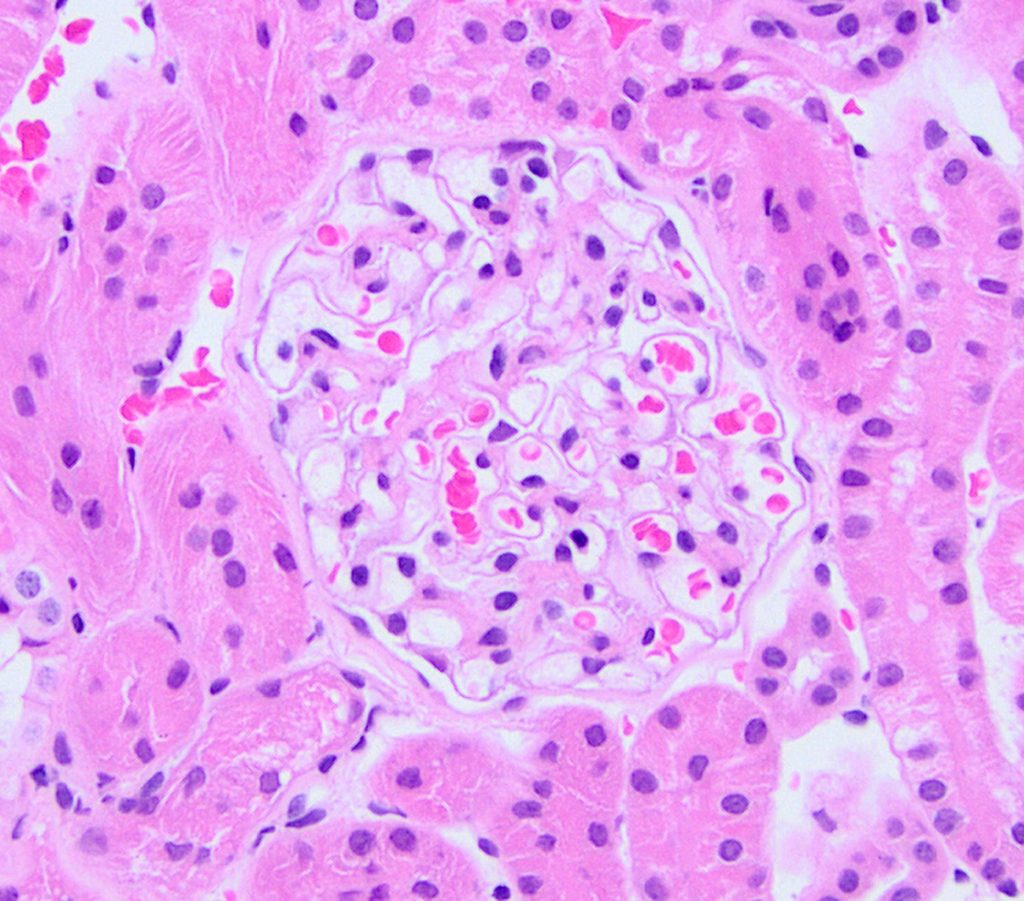 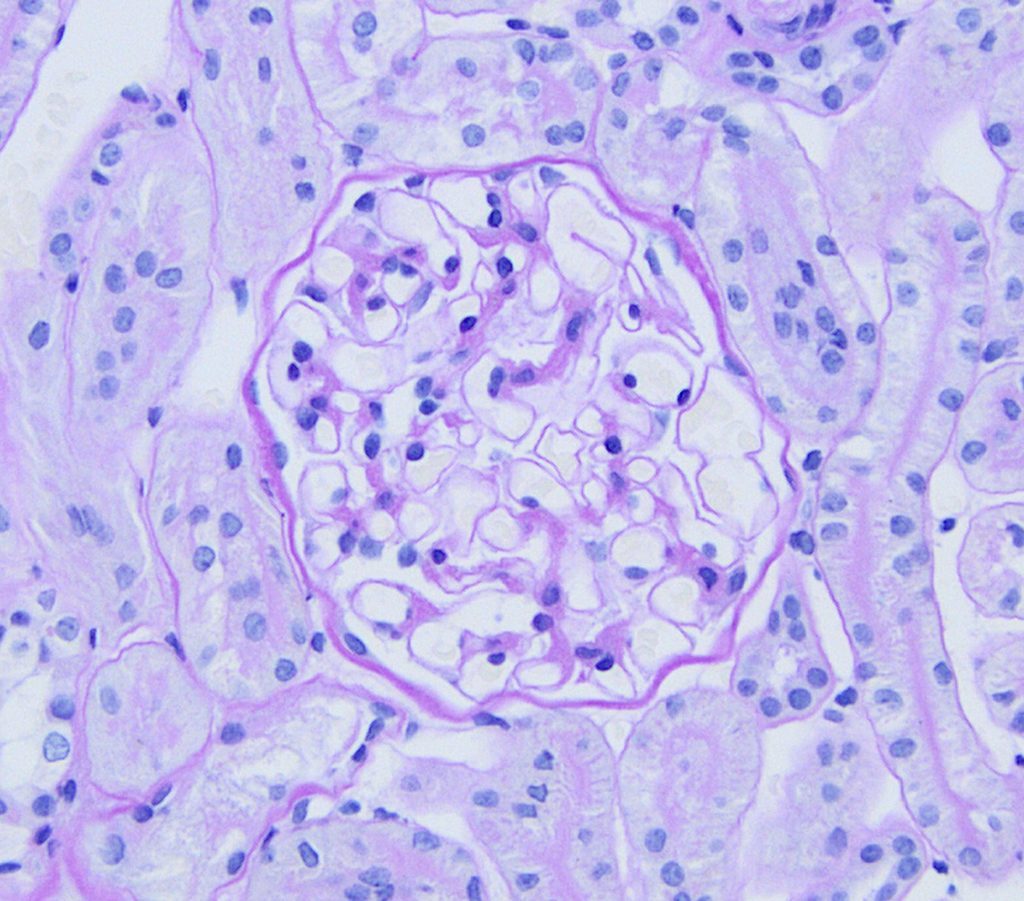 FIG.2B (PAS): The glomerulus is normocellular and the mesangium and GBM are unremarkable. 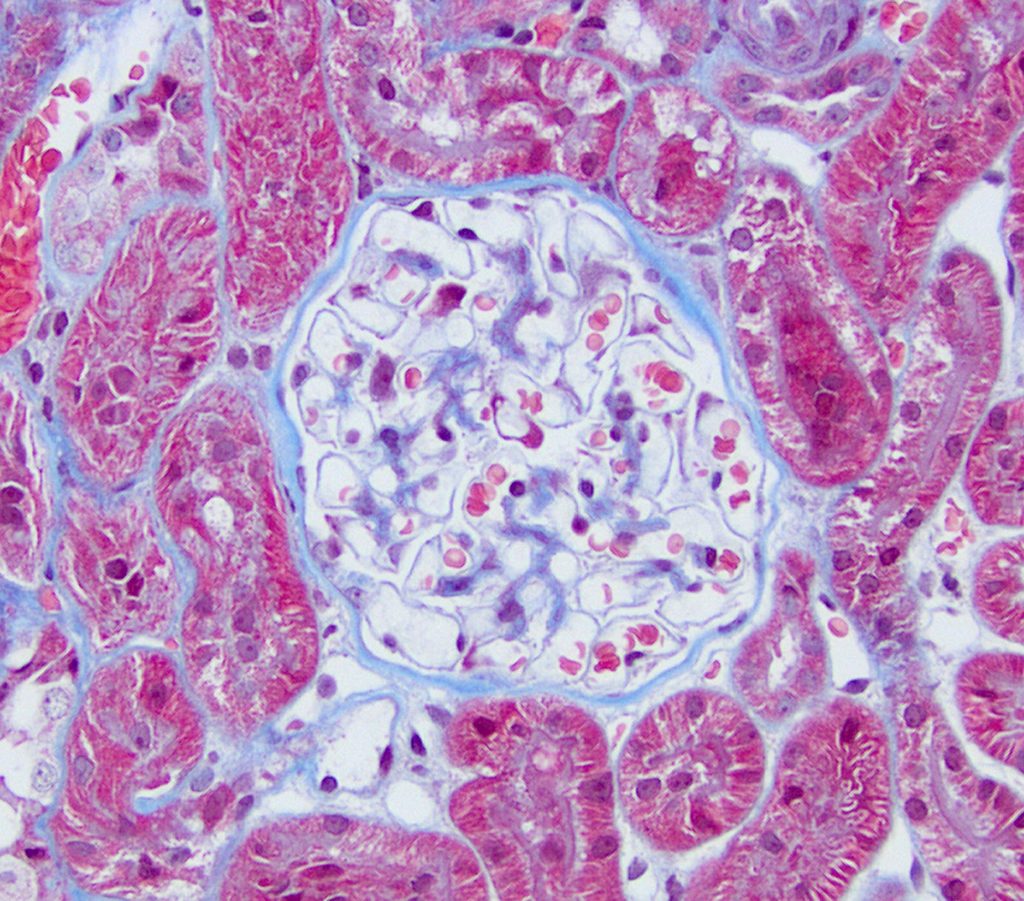 FIG.2C (MT): The glomerulus is histologically normal. Fuschinophilic (red) deposits are not osberved. The GBM is thin and uniform, the mesangium is normal, and there is no fibrosis in the surrounding interstitium. 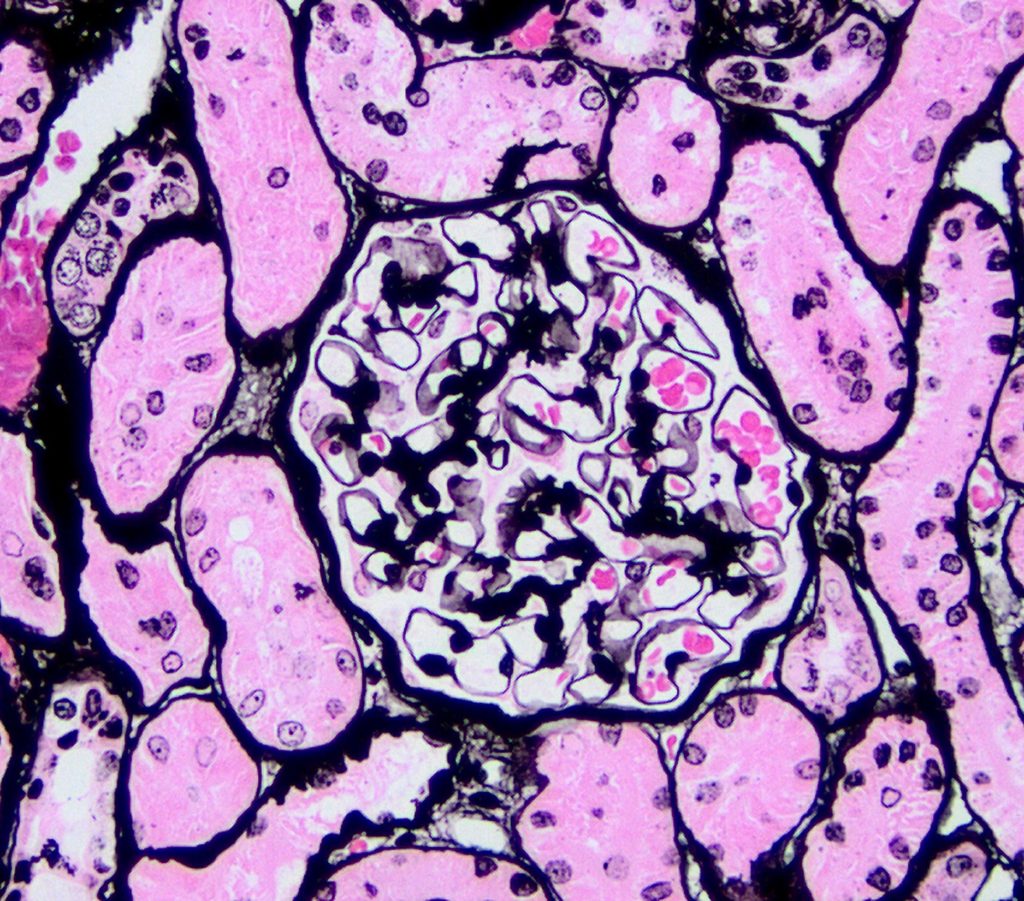 FIG.2D (JMS): Capillary walls are of normal thickness; there is no evidence of GBM remodeling. 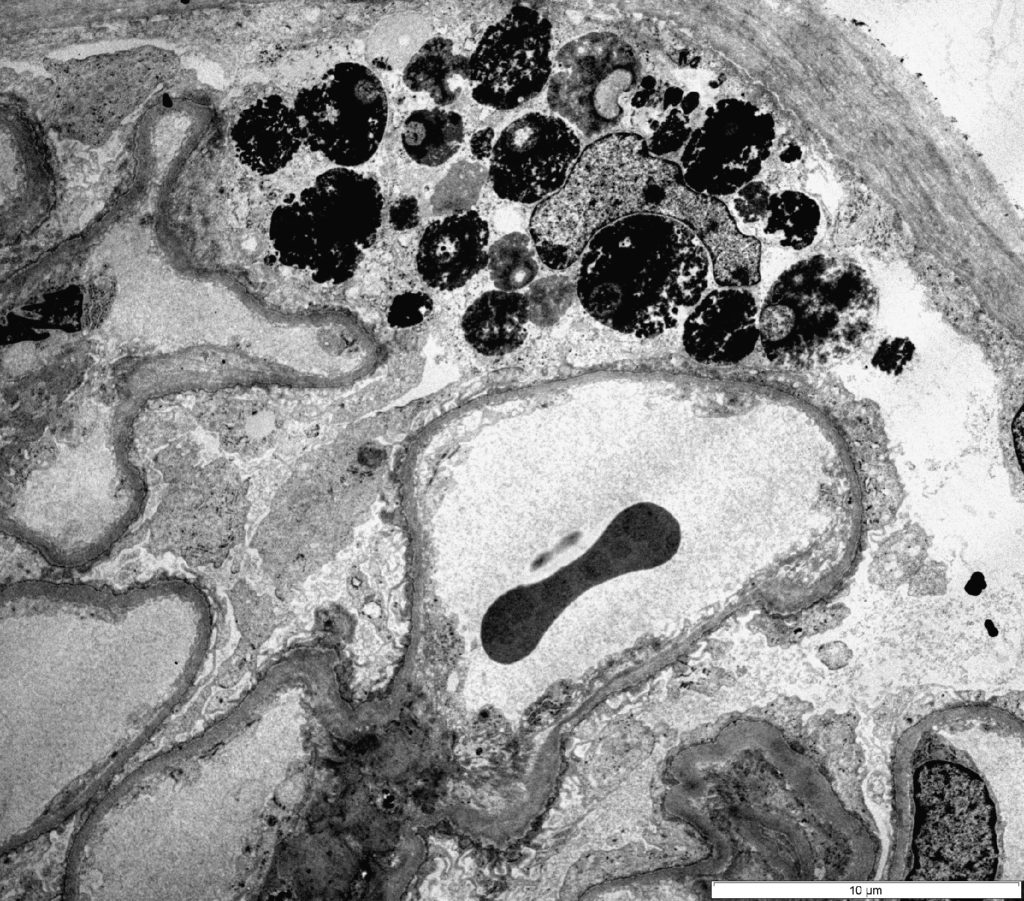 FIG.2E (TEM): Ultrastructural evidence of diffuse and global podocyte injury is present. In this case, one podocyte contains large electron dense lysosomes, and although difficult to appreciate at this low magnification, all podocytes exhibit foot process effacement. 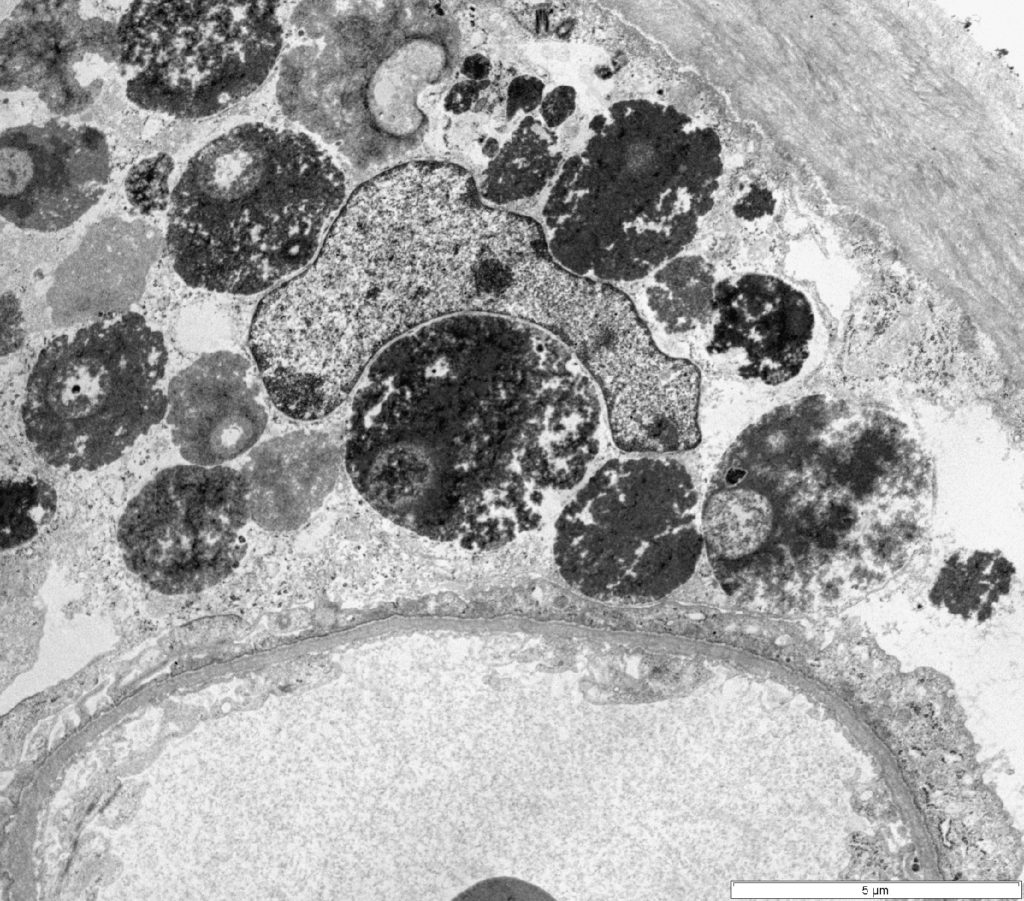 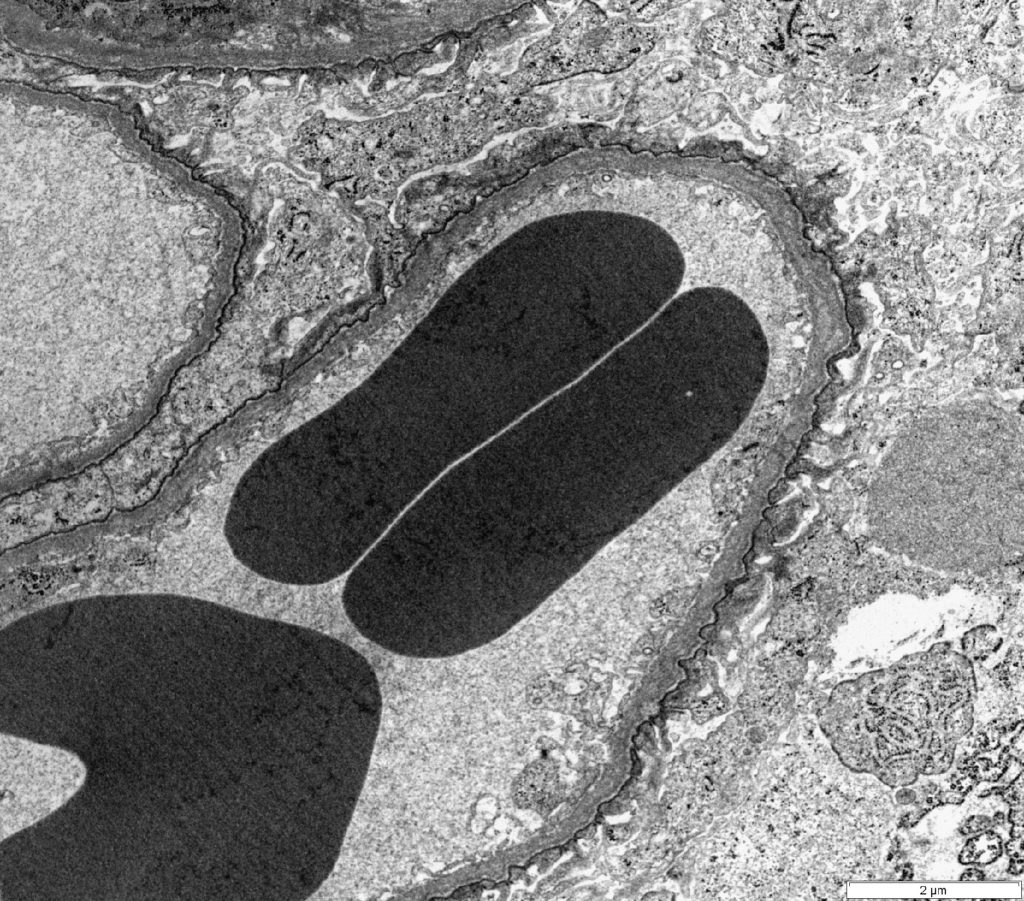 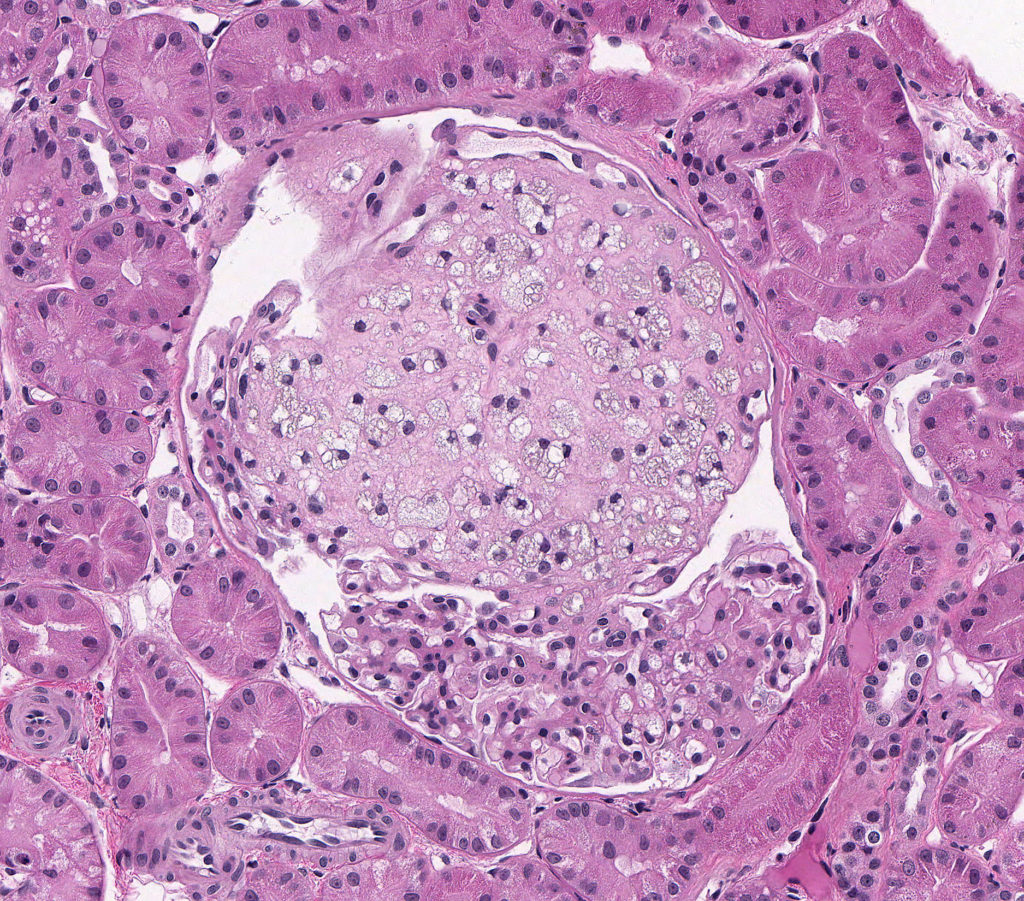 FIG.3A (HE): The glomerular tuft architecture is segmentally distorted and effaced with large “foamy” cells. 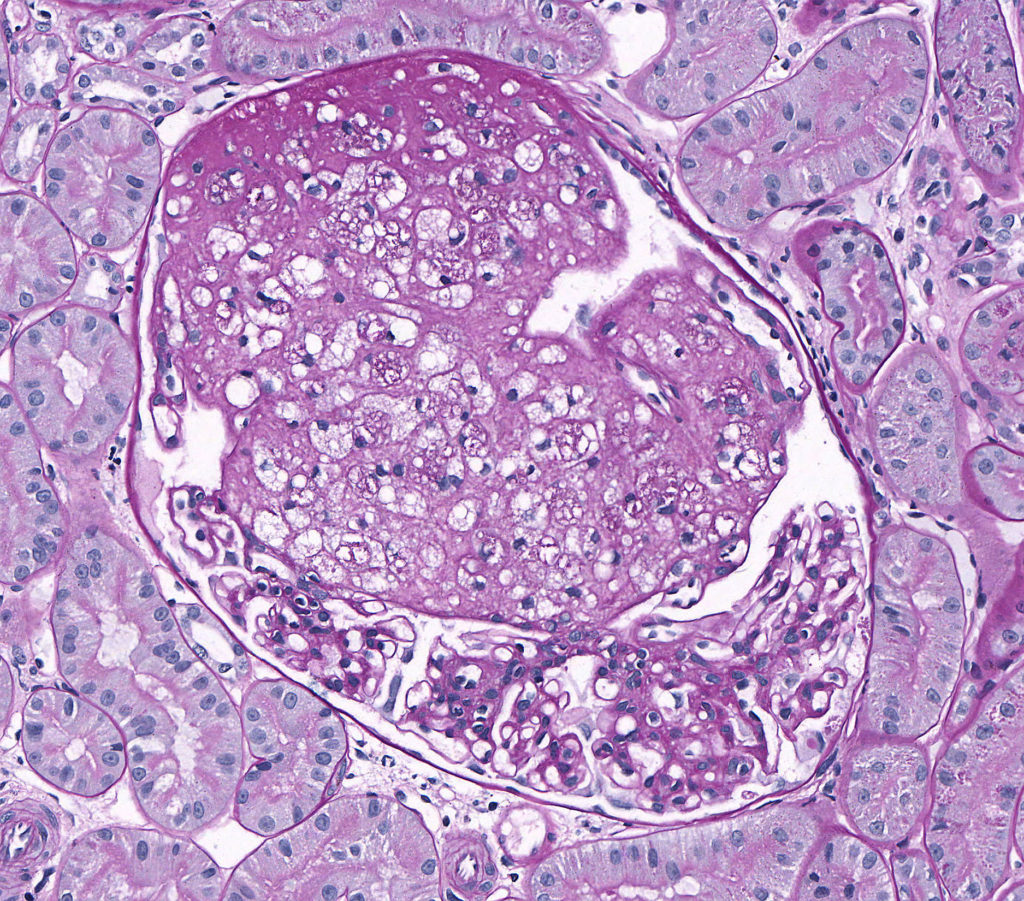 FIG.3B (PAS): The glomerular tuft architecture is segmentally distorted and effaced with large “foamy” cells.  the remainder of the tuft appears fairly normal but compressed. 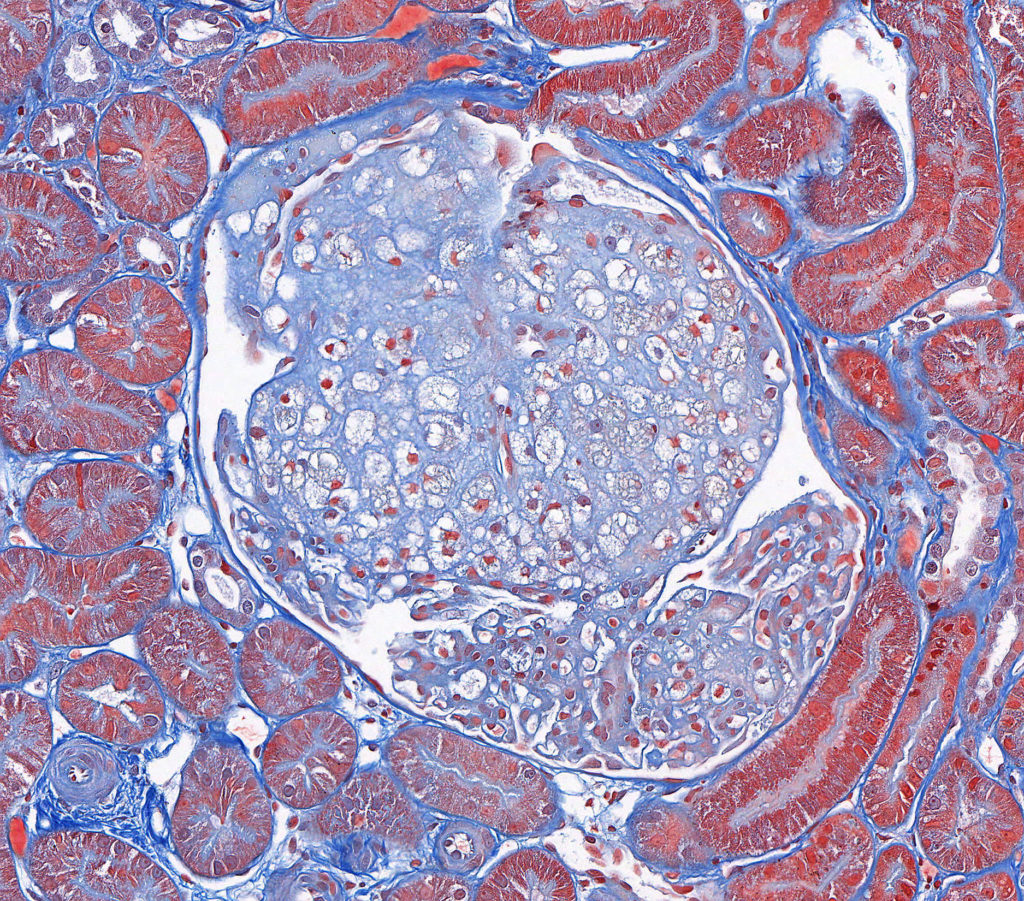 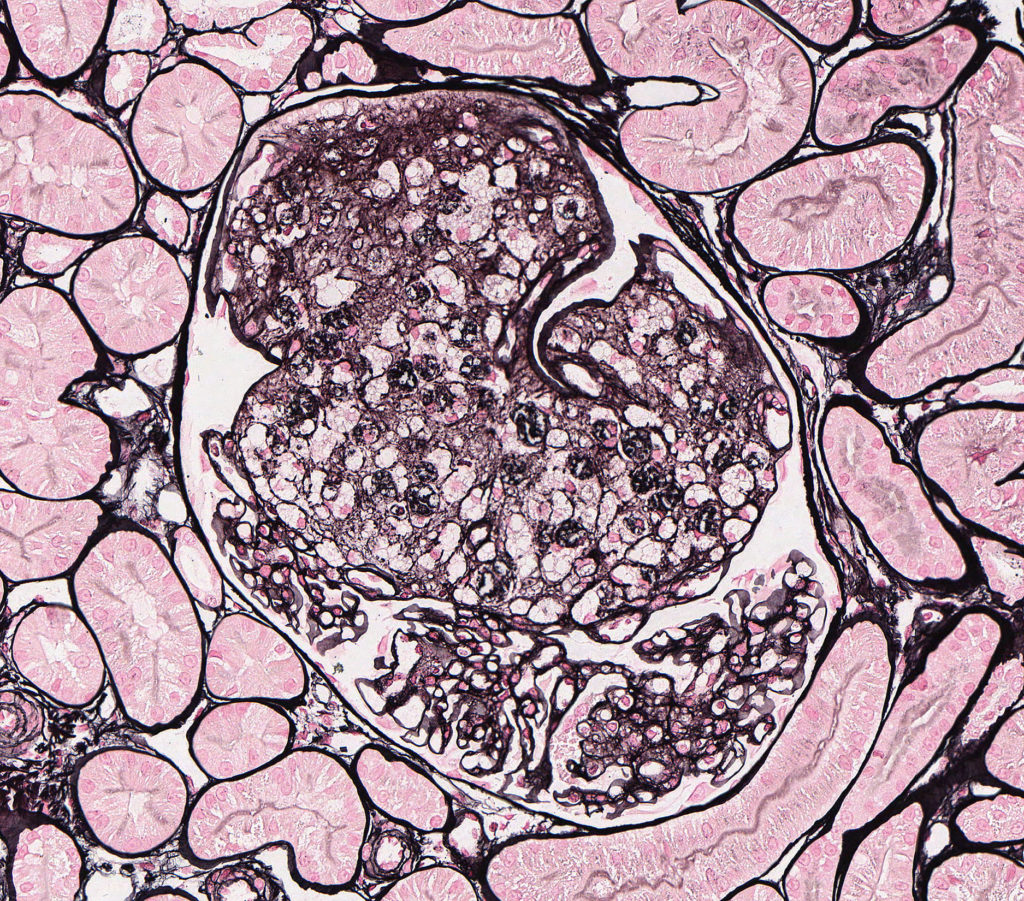 FIG.3D (JMS): The glomerular tuft architecture is segmentally distorted and effaced with large “foamy” cells.  The capillary walls of the remaining portion of the glomerulus are of normal thickness and have a smooth contour. 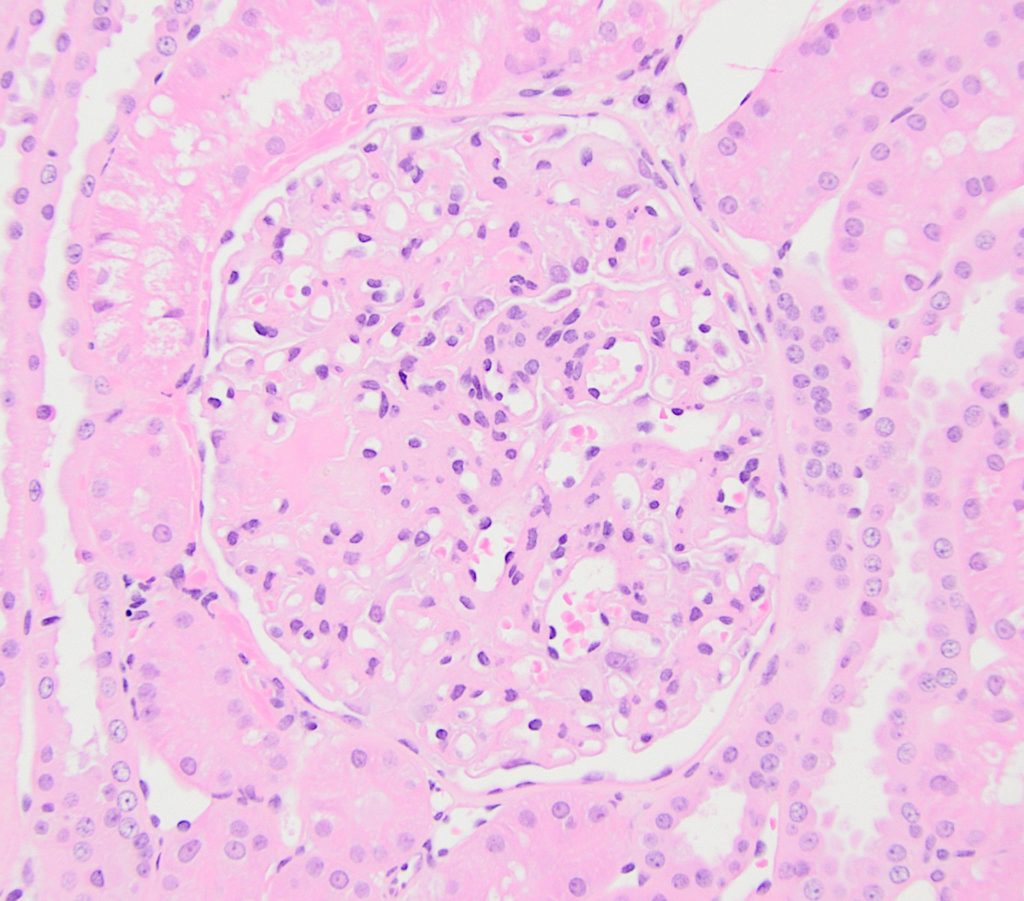 FIG.4A (HE): There is segmental eosinophilic hypocellular expansion of the mesangium which cannot be easily differentiated from a small amount of proteinaceous fluid in Bowman’s space. Of note, only a small proportion (~10%) of the glomeruli in the sample had similar lesions; the remaining majority of the glomeruli appeared histologically normal. 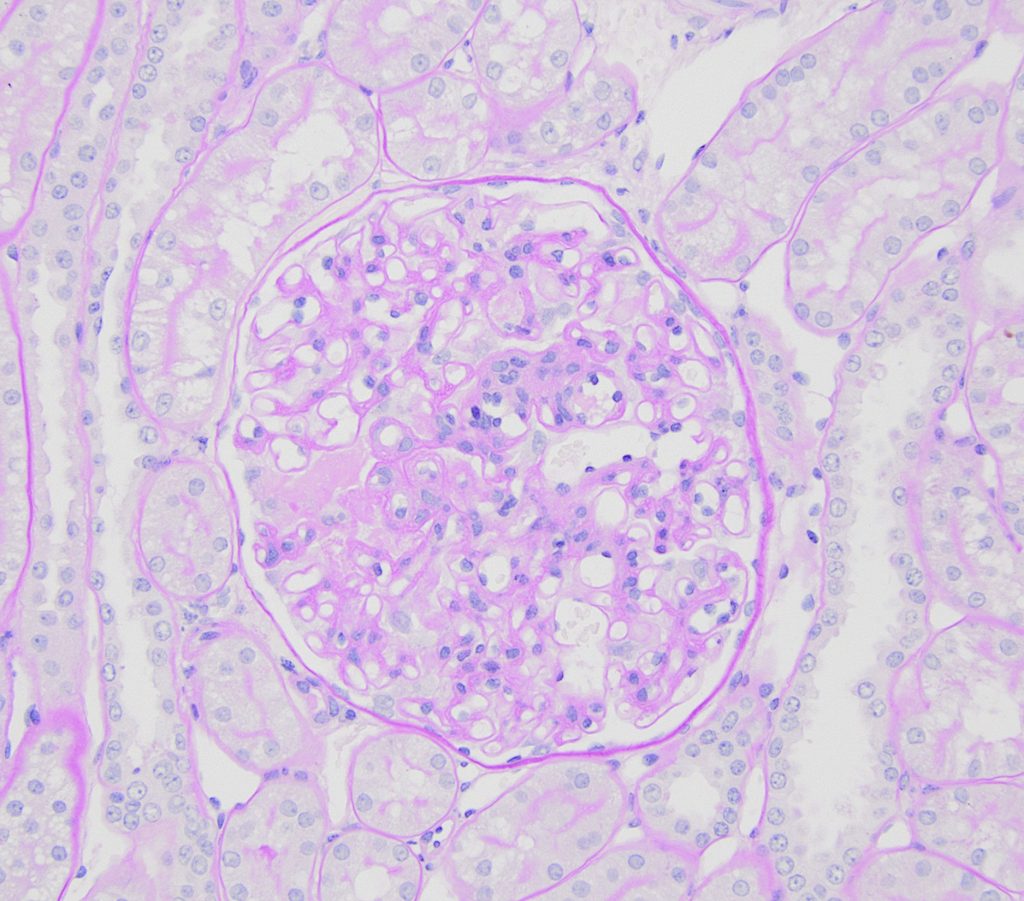 FIG.4B (PAS): This stain allows differentiation of the proteinaceous fluid in Bowman’s space from the expanded  mesangium.  Additionally in the same region of the tuft, the capillary loops are multi-laminated, whereas they have a normal contour in the rest of the glomerulus. 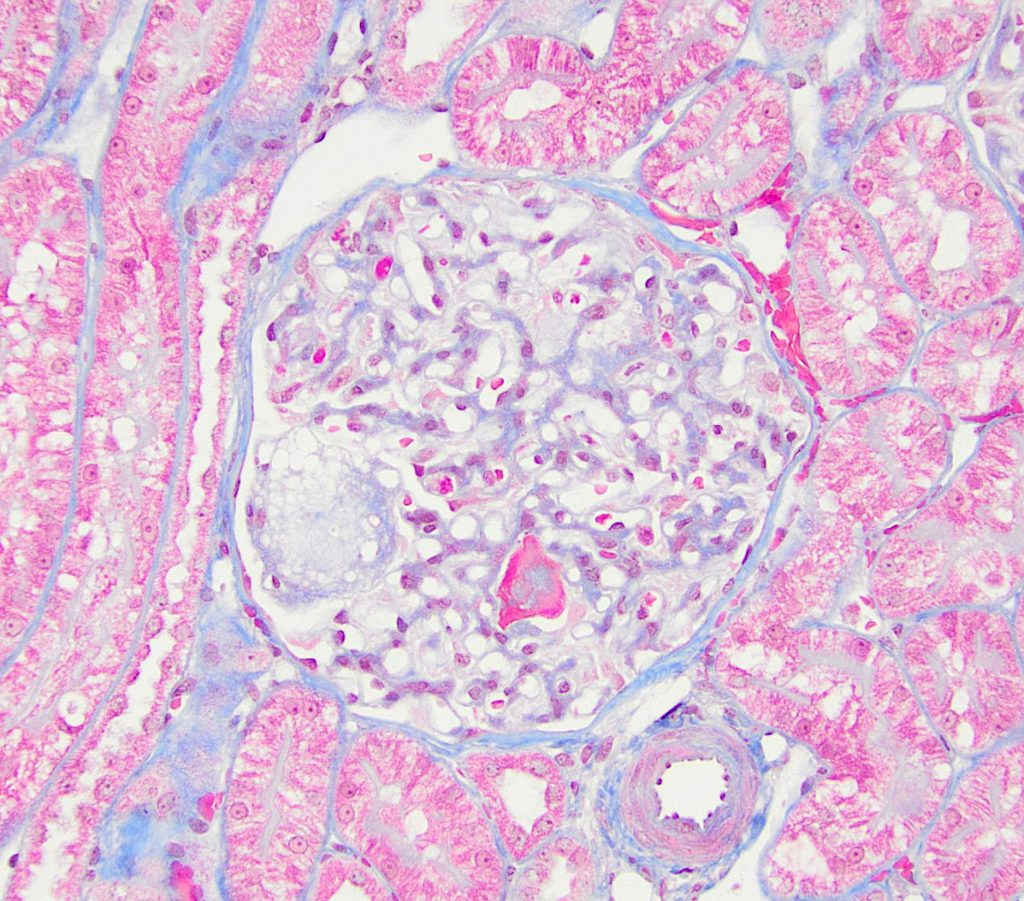 FIG.4C (MT): This stain highlights the hazy blue lucency of the mesangium (mesangiolysis) in a region of the tuft that still has patent peripheral capillary loops.  Another region of proteinaceous fluid (central blue encircled by red material) is present at this level of section. 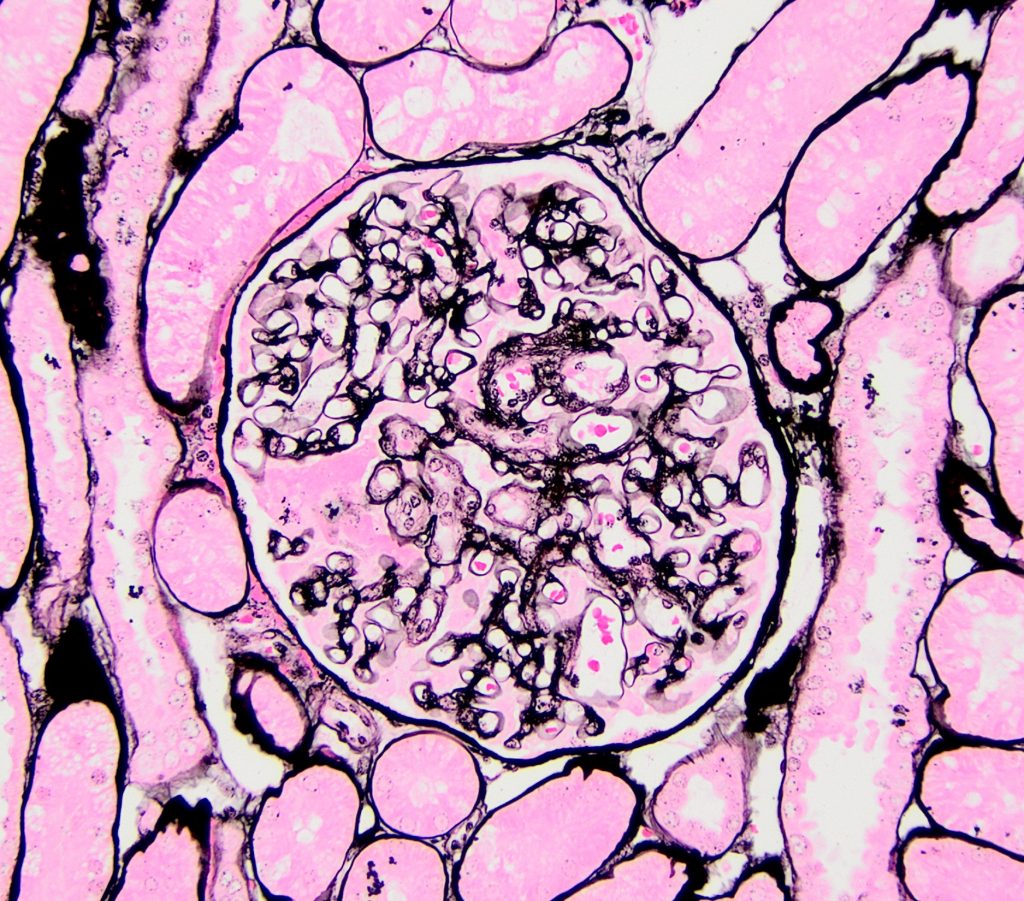 FIG.4D (JMS): Similar to the PAS stain,  the JMS method highlights the  double contouration of the capillary walls and separates this lesion from the proteinaceous fluid in Bowman’s space. 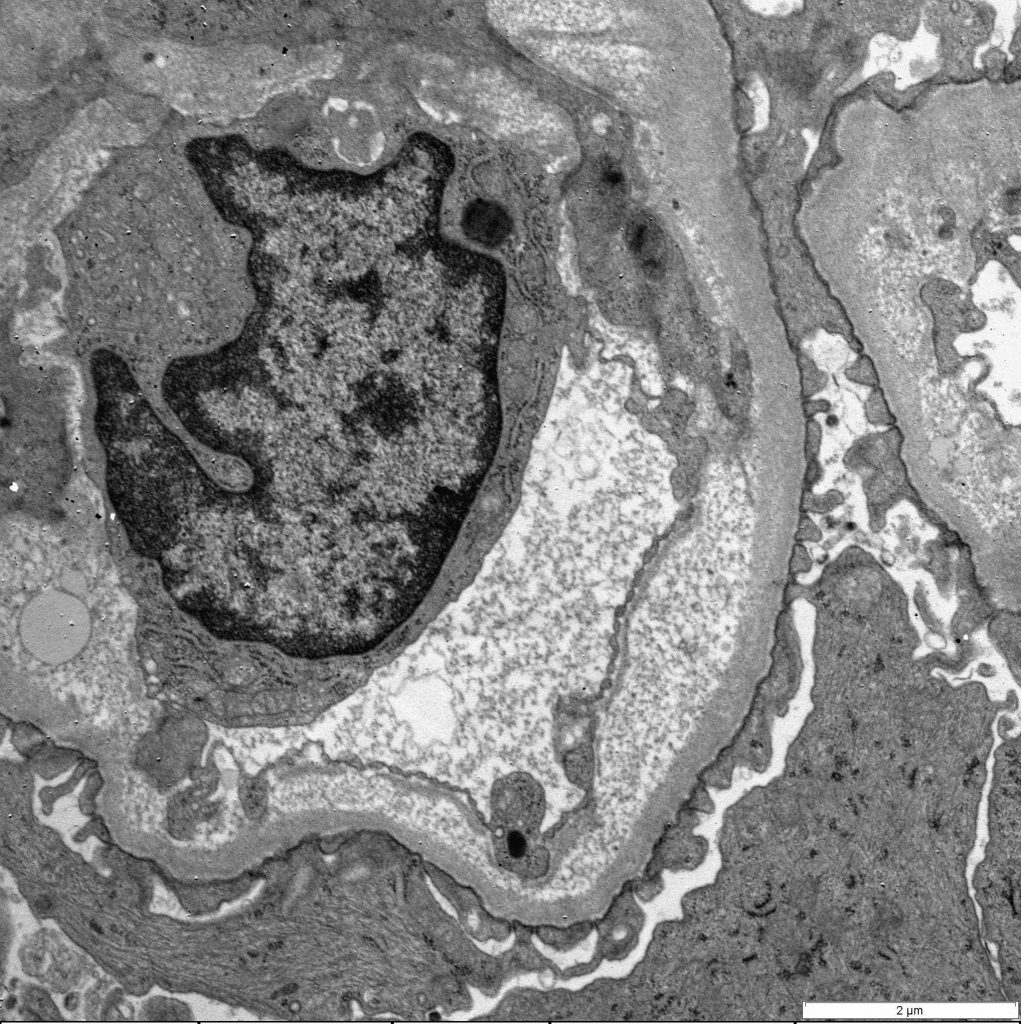 FIG.4E (TEM): There is subendothelial expansion of the glomerular basement membrane by relatively electron lucent flocculent material.  The endothelial cell is swollen and the capillary lumen is compressed.  Endothelial fenestrations are present in this TEM image. In acute TMA lesions, there can be loss of endothelial cell cytoplasm or of the fenestrations. Notably, even though there might only be a few glomeruli affected based on light microscopic appearance, there is more widespread damage based on ultrastructural evaluation, such that a randomly sampled glomerulus in the TEM sample demonstrated these lesions.
FIG.4F (TEM): Colorized version of above TEM.  Green: GBM; Yellow: Endothelial cell; Pink: Podocyte; Blue: Mesangium. 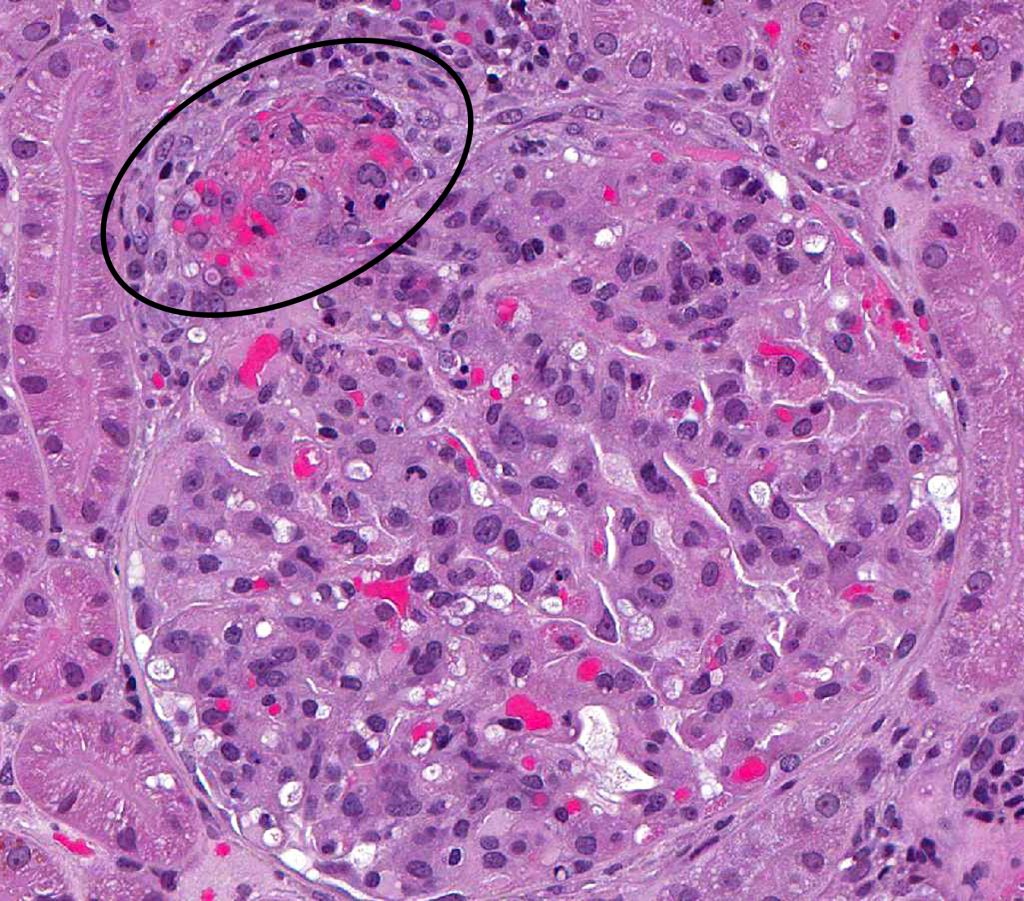 FIG.5A (HE): Thrombotic microangiopathic lesions can occur in patients that have underlying disease which might result in hypertension.  In these scenarios, the vascular pole is usually affected (circled). 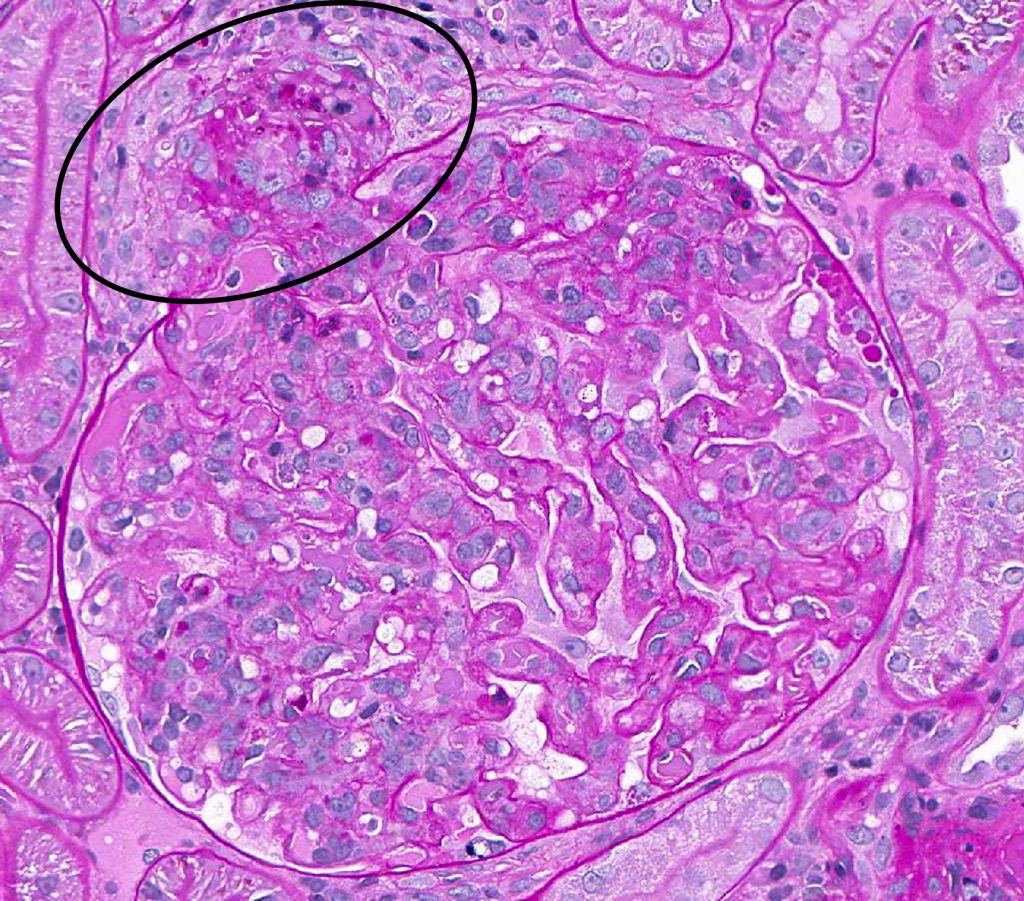 FIG.5B (PAS): In this stain, the fibrinoid degeneration of the arteriole is easily seen as fuschinophilic material in the wall (circled). 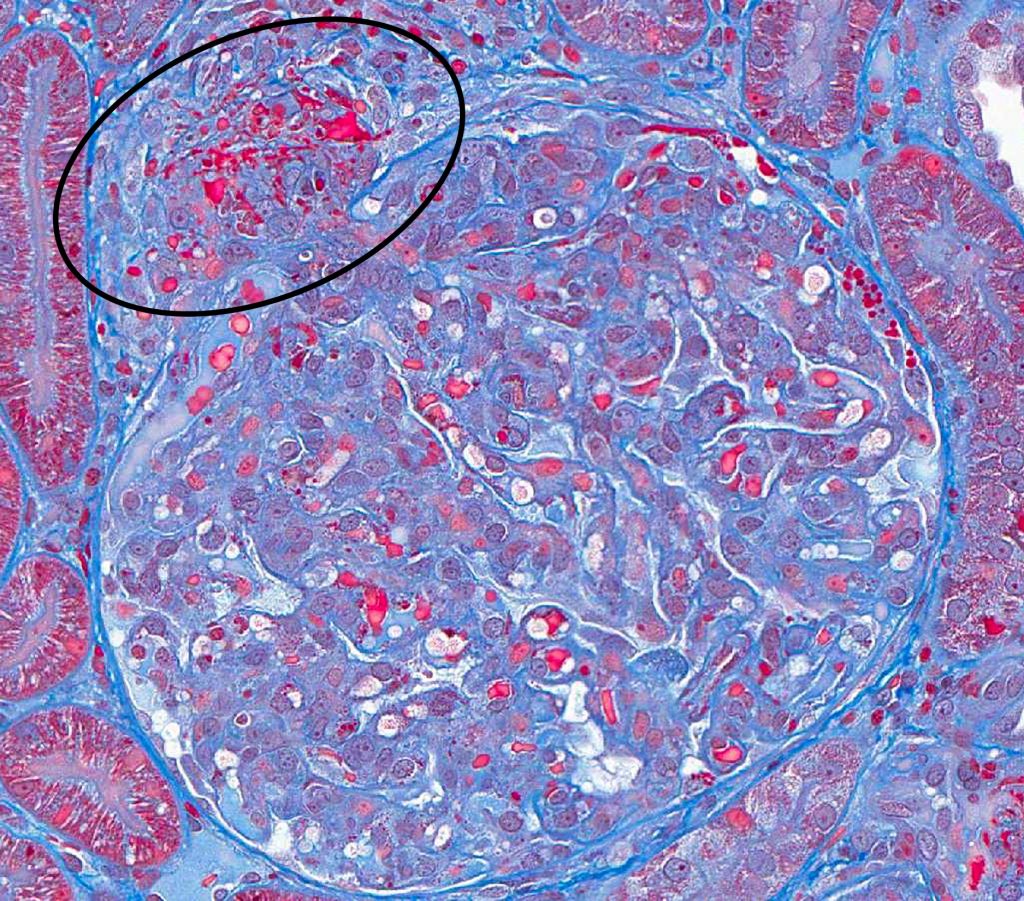 FIG.5C (MT): In this stain, the fibrinoid degeneration of the arteriole is easily seen as red material in the wall (circled).  This stain also enable visualization of the fragmented red cells in the wall. 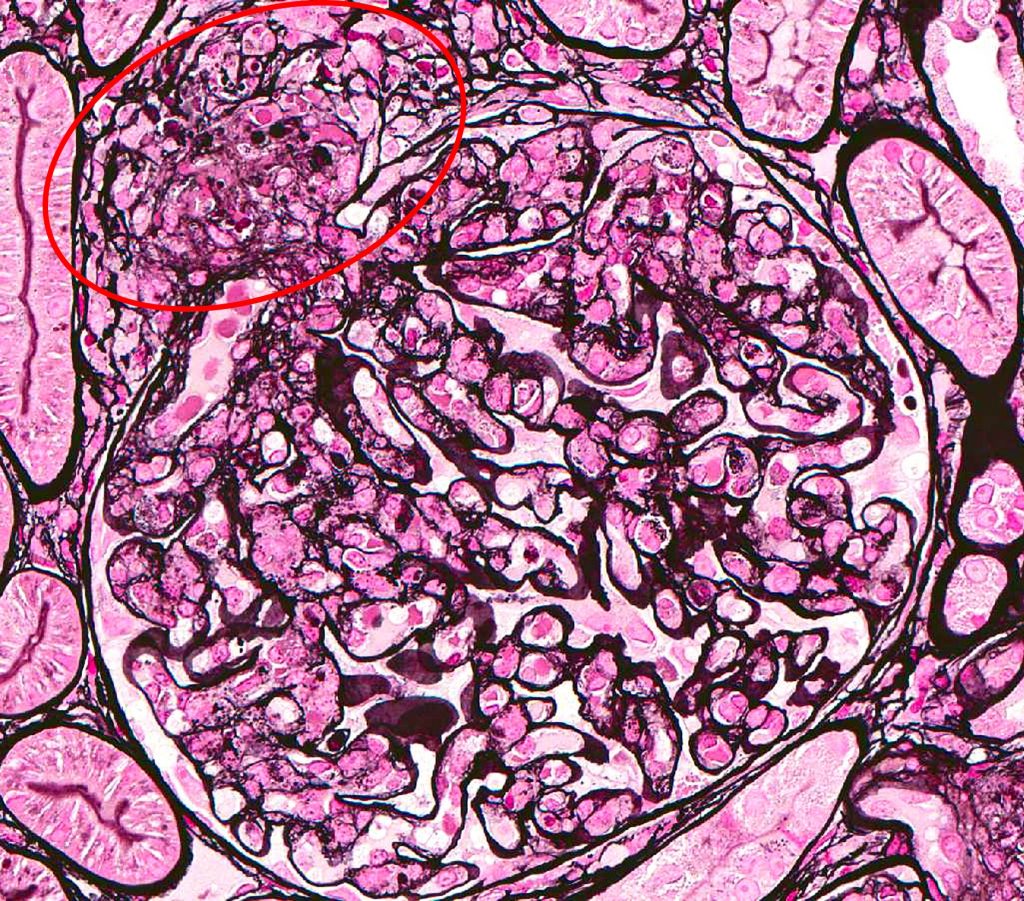 FIG.5D (JMS): In this stain, the fibrinoid degeneration of the arteriole is easily seen (circled). 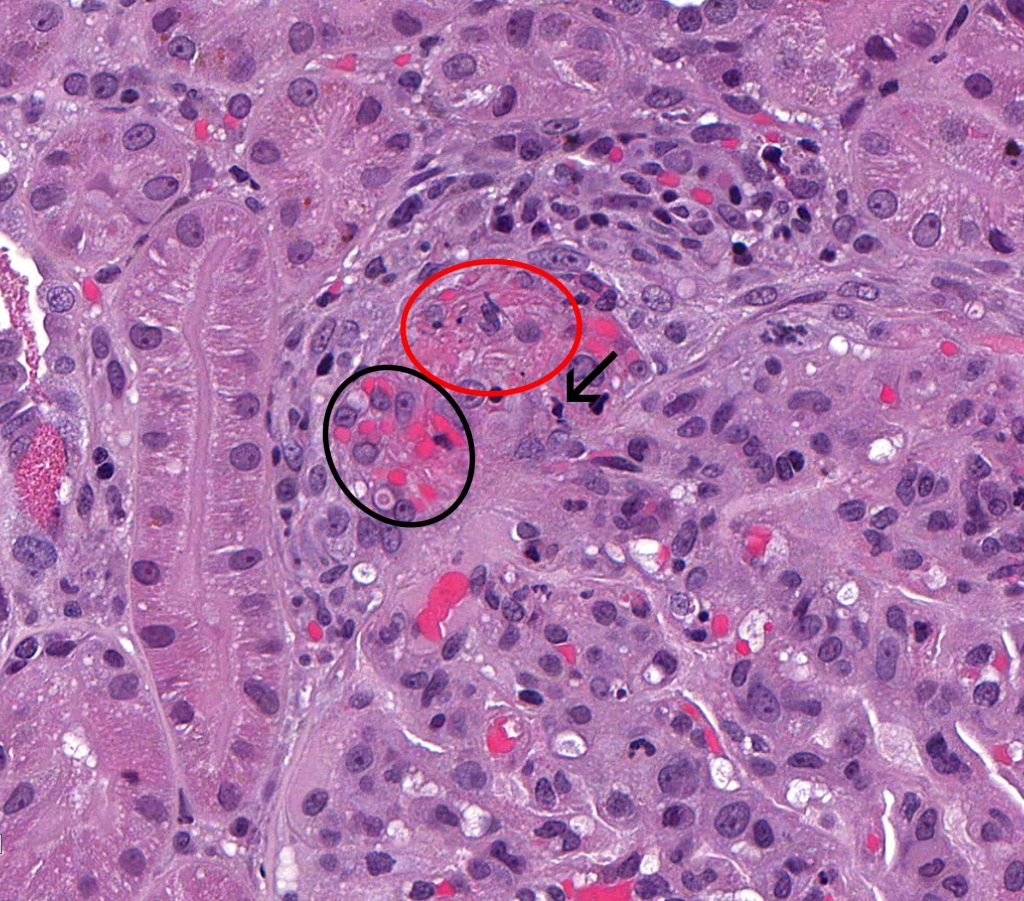 FIG.5E (HE): Higher magnification of FIG.5A.  Erythrocytes have been pushed into the wall of the afferent arteriole (black circle) and there is fibrinoid degeneration of the artertiolar wall (red circle).  Pyknotic nuclear debris is also present in the wall (arrow). 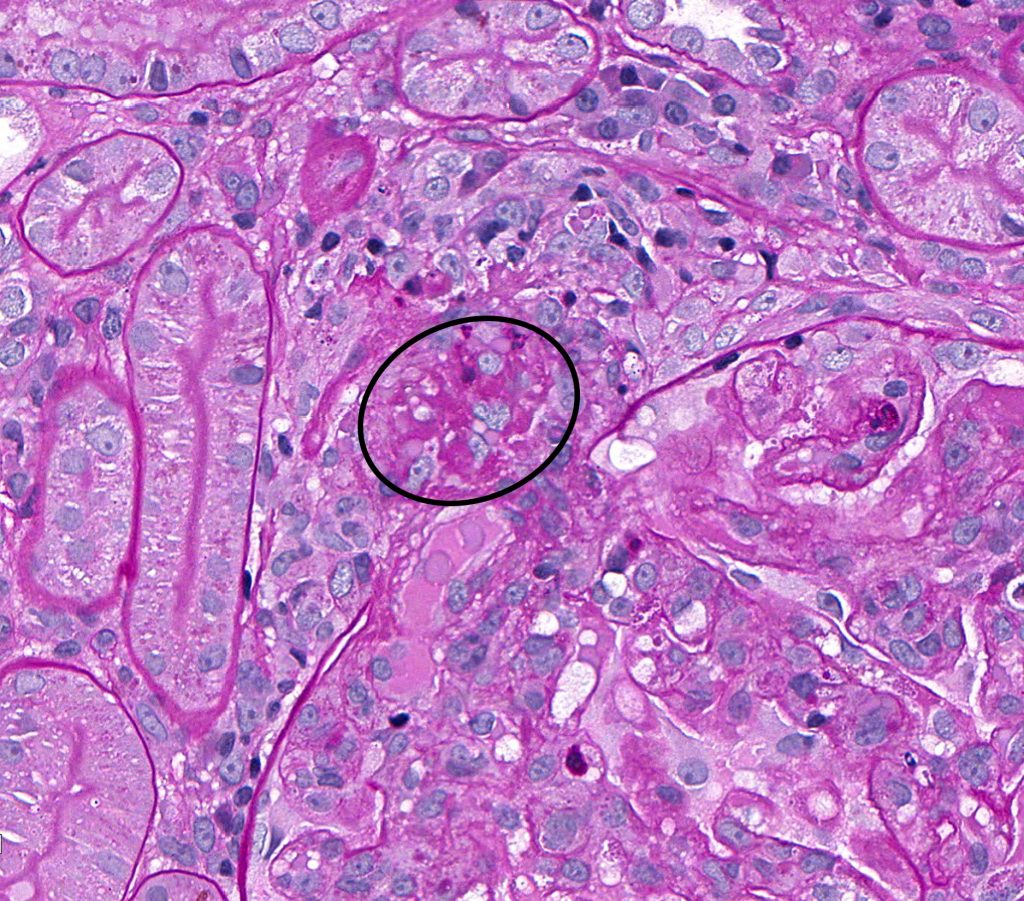 FIG.5F (PAS): Higher magnification of FIG.5B. In this stain, the fibrinoid degeneration of the arteriole is easily seen as fuschinophilic material in the wall (circled). 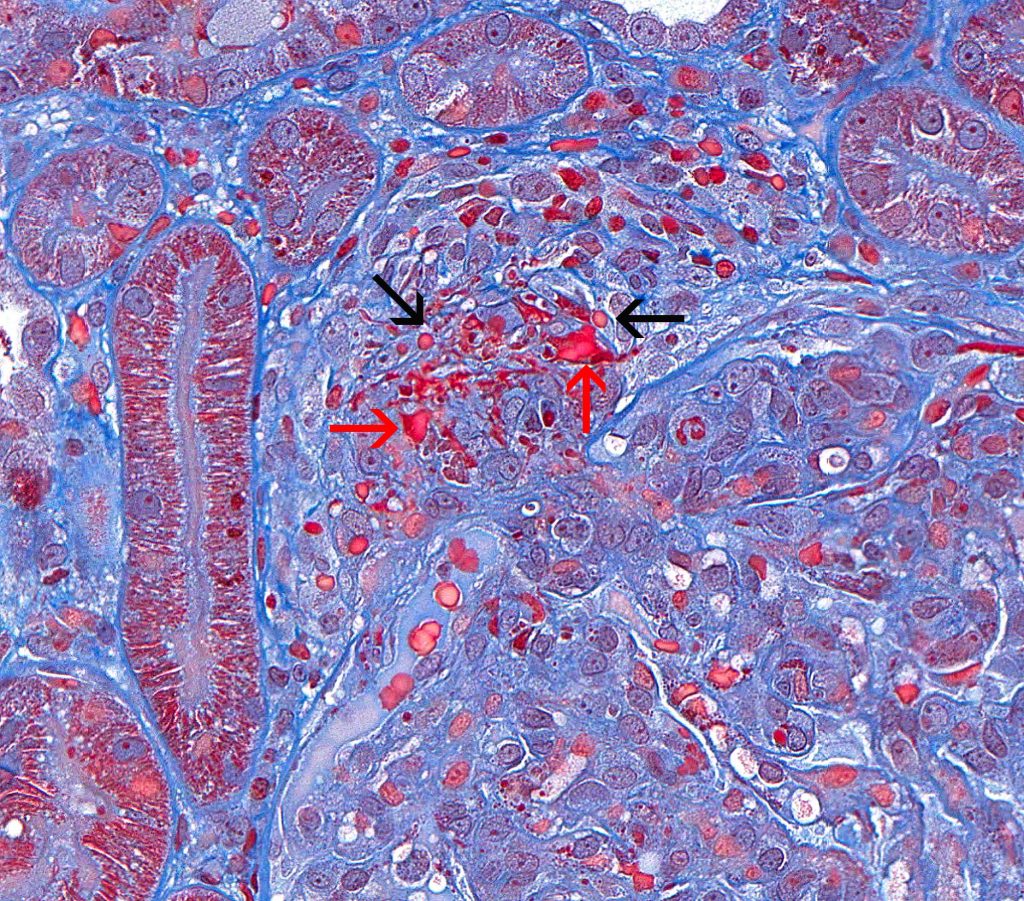 FIG.5G (MT): Higher magnification of FIG.5C. The fibrinoid necrosis can be seen as red material (red arrows), whereas there are also erythrocytes in the arteriolar wall (black arrows). 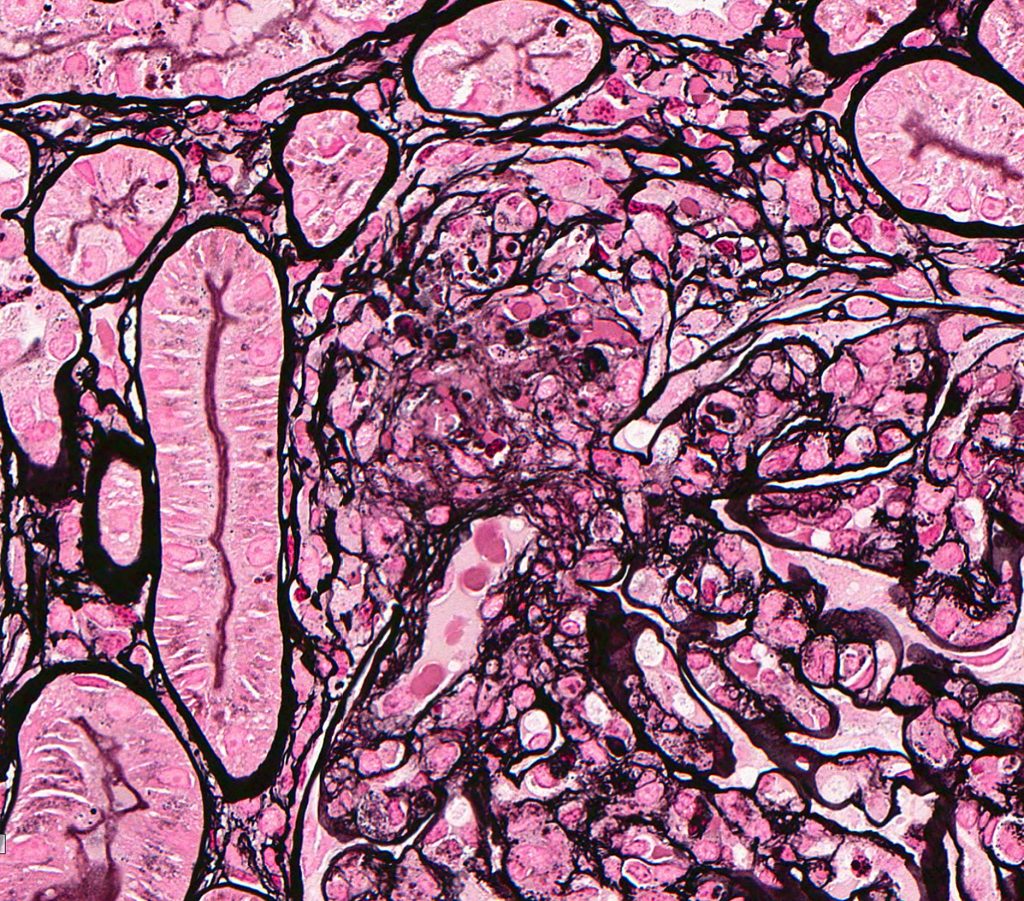 FIG.5H (JMS): Higher magnification of FIG.5D. The silver stain demonstrates the destruction of the basement membrane of the afferent arteriole. 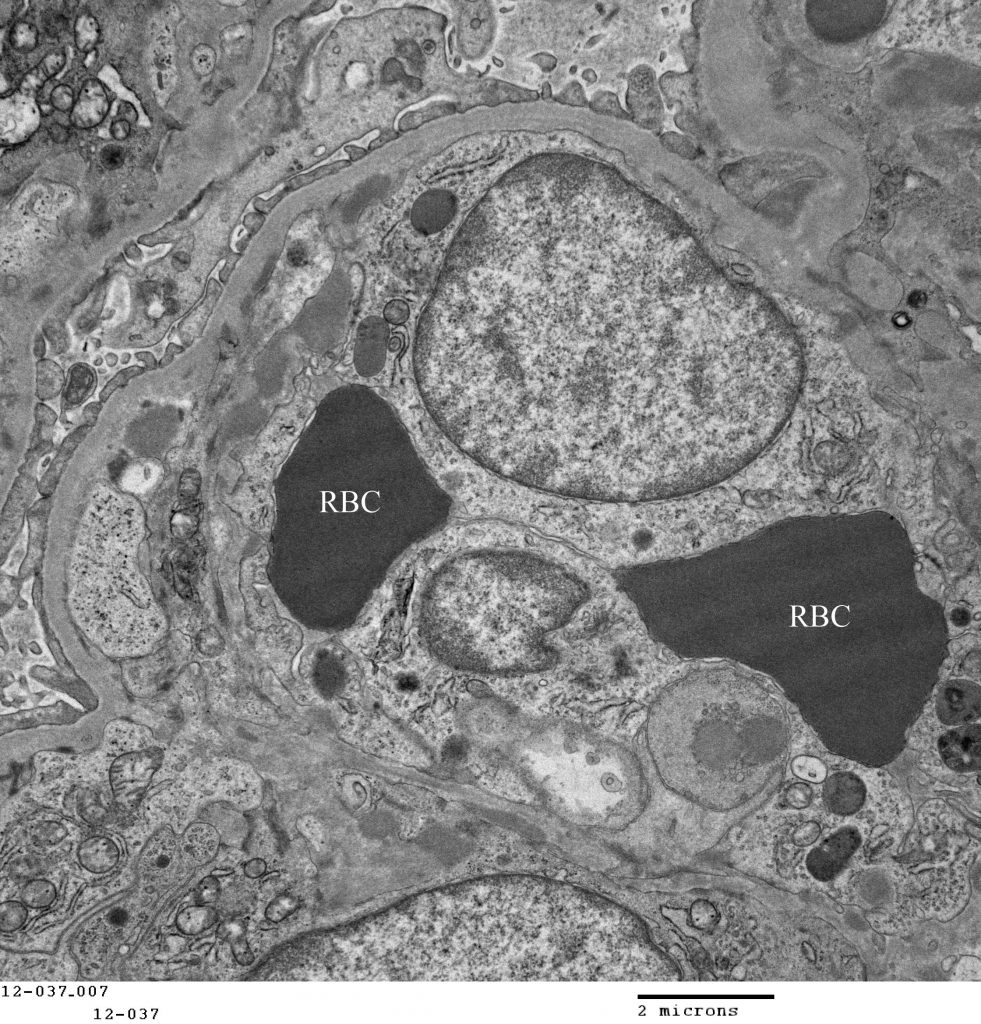 FIG.5I (TEM): Endothelial cells are swollen, leading to loss of fenestrae and distortion of circulating red blood cells (RBC).  There are small electron dense deposits in subendothelial and intramesangial regions.