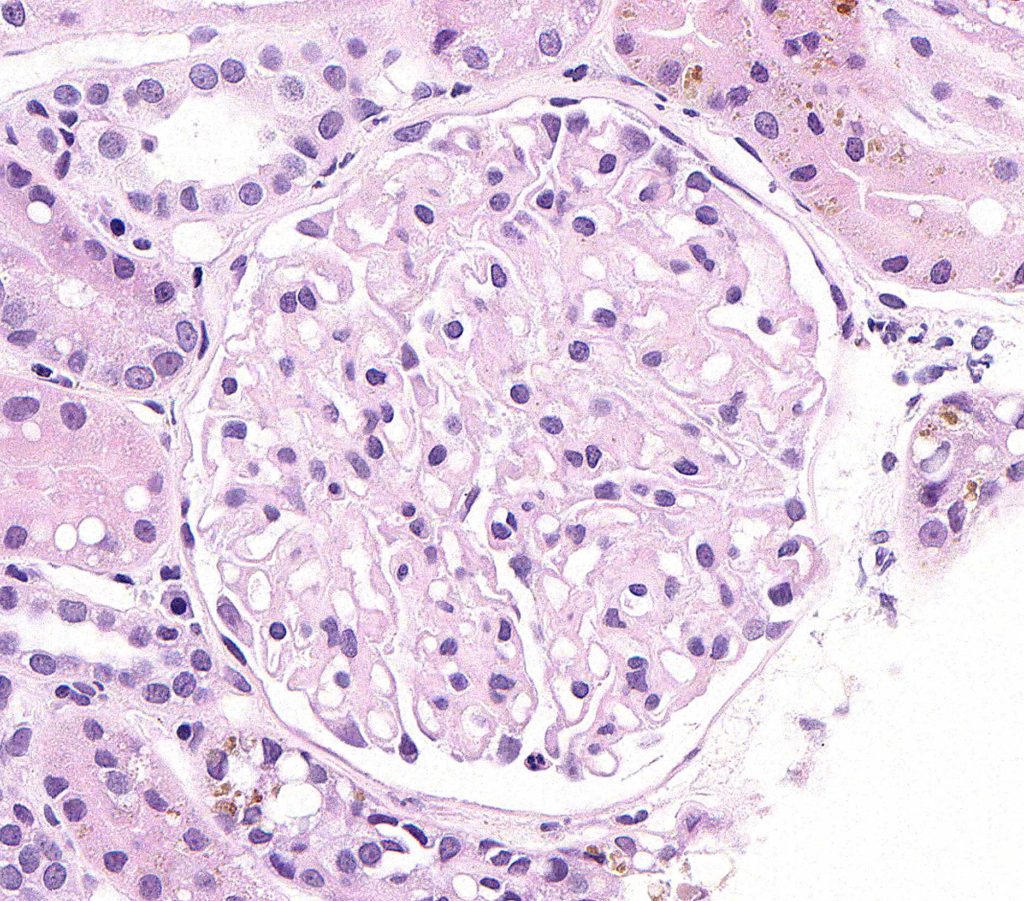 FIG.1A (HE): The glomerulus is normocellular. Some capillary walls appear slightly thickened; however, capillary wall thickness is better evaluated with PAS because the podocyte cytoplasm and GBM stain differently with this method. 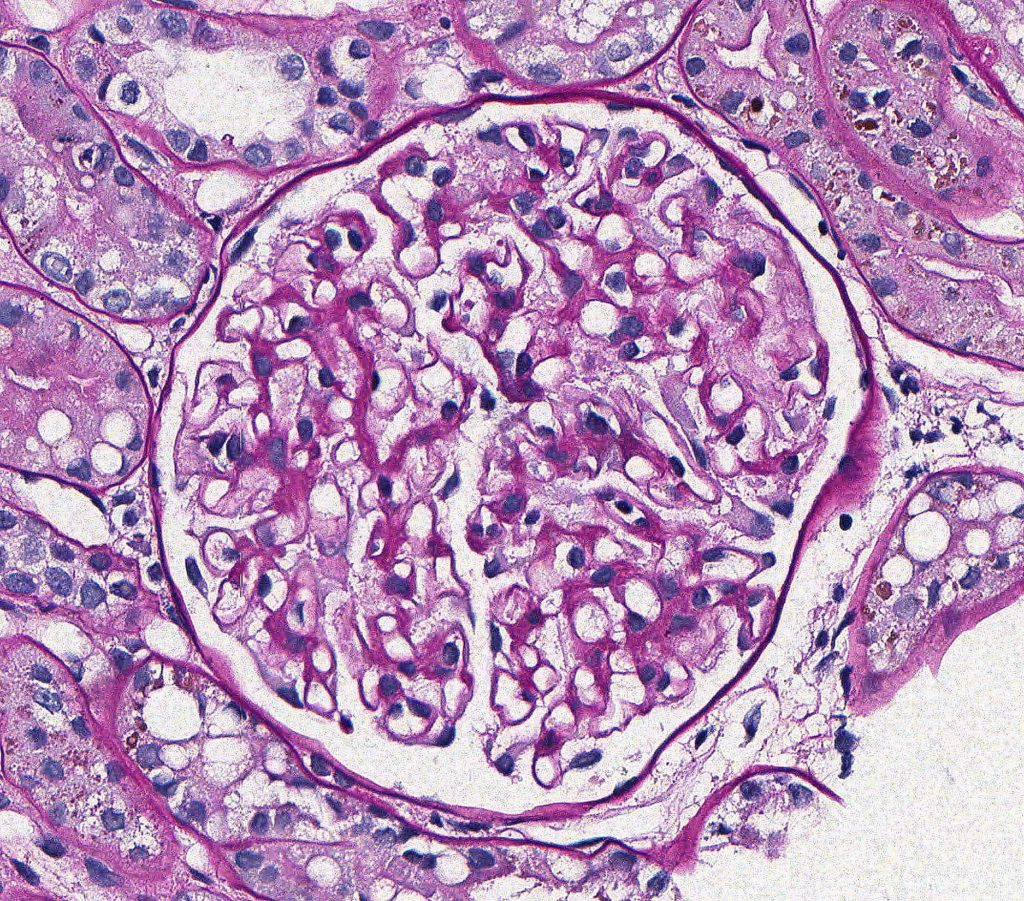 FIG.1B (PAS):  The GBM, which is best evaluated in the peripheral capillary loops, is thin and has a smooth contour. 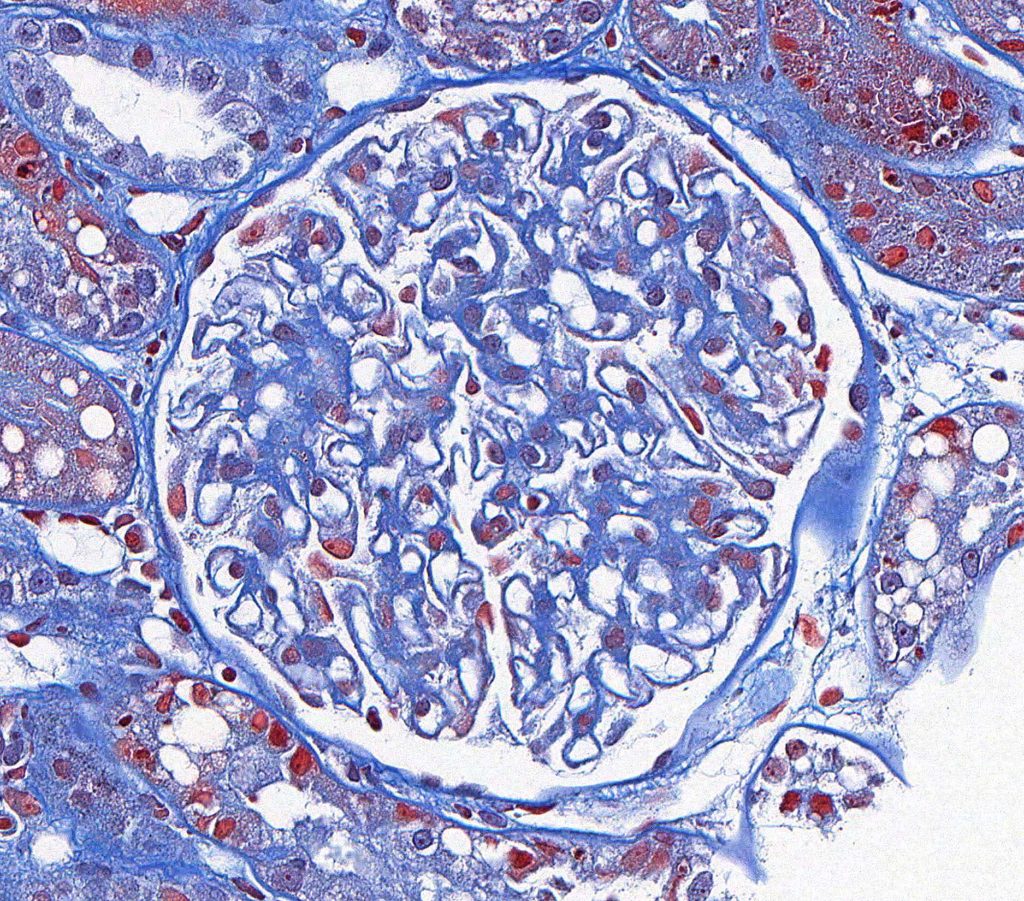 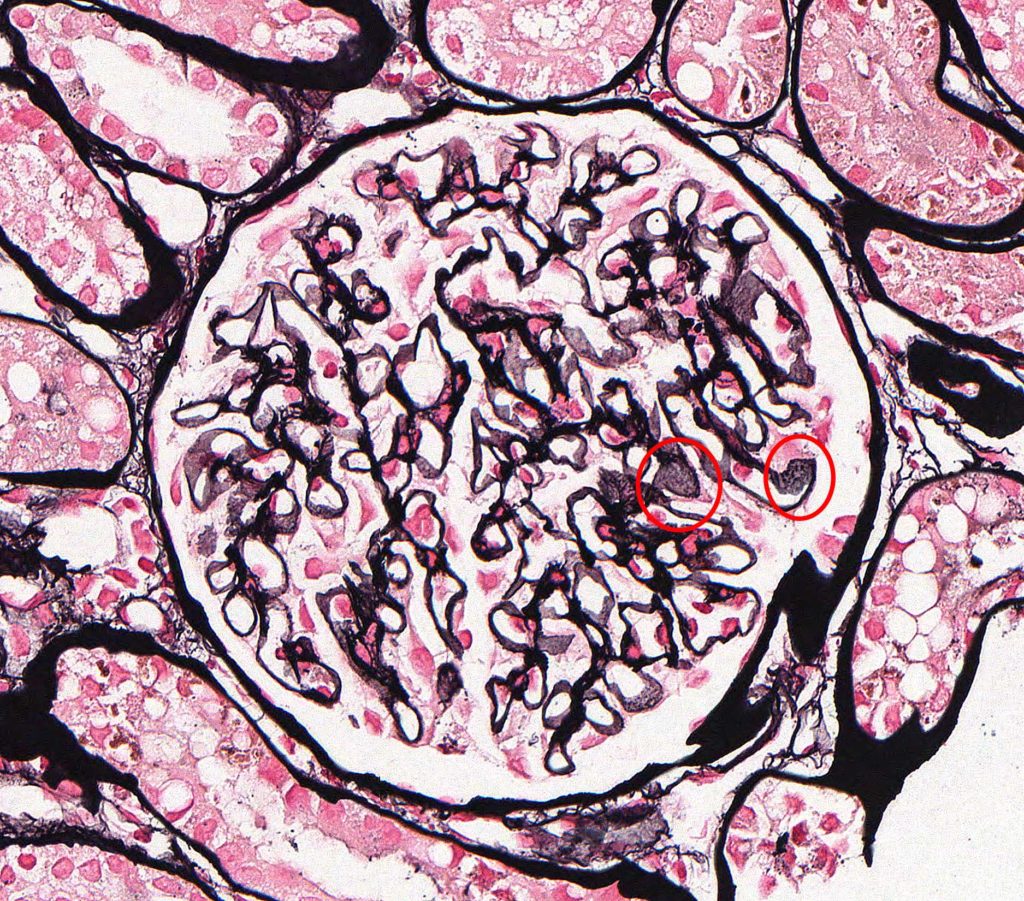 FIG.1D (JMS): Capillary walls are of normal thickness; remodeling is not observed.  There are pinpoint lucent foci on the en face surfaces of a few capillary walls (circled). 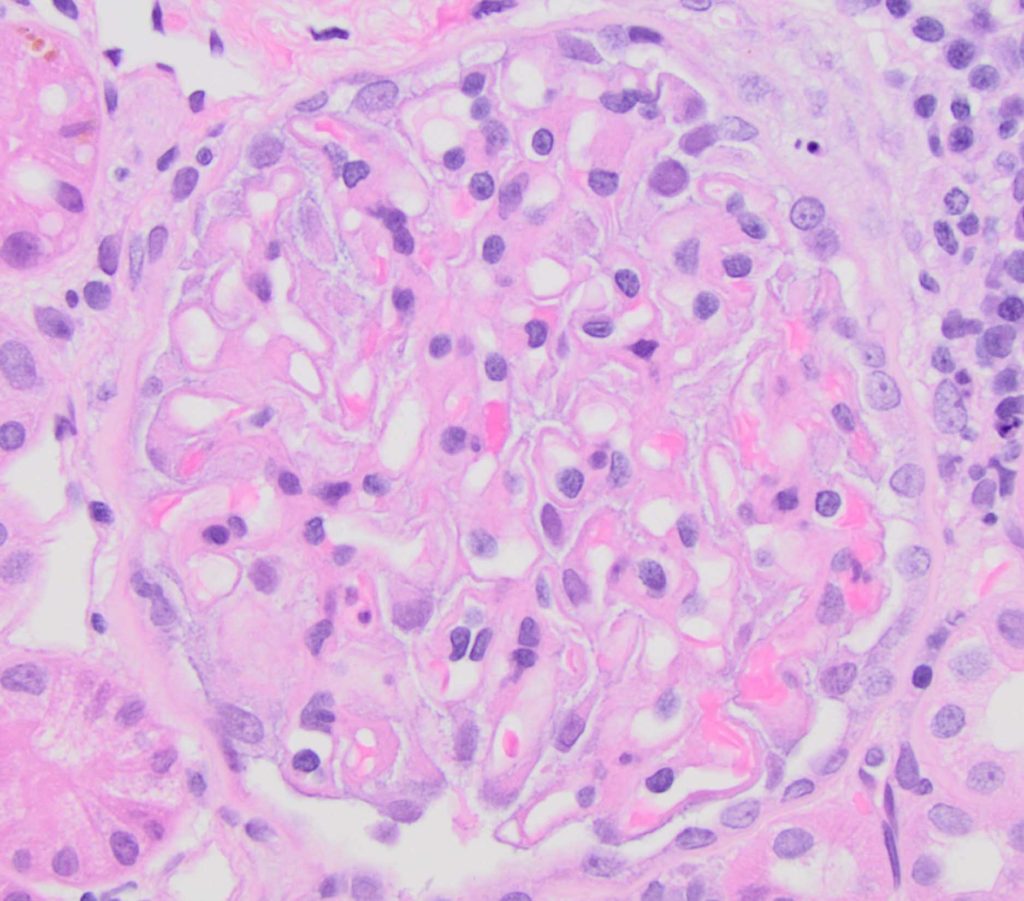 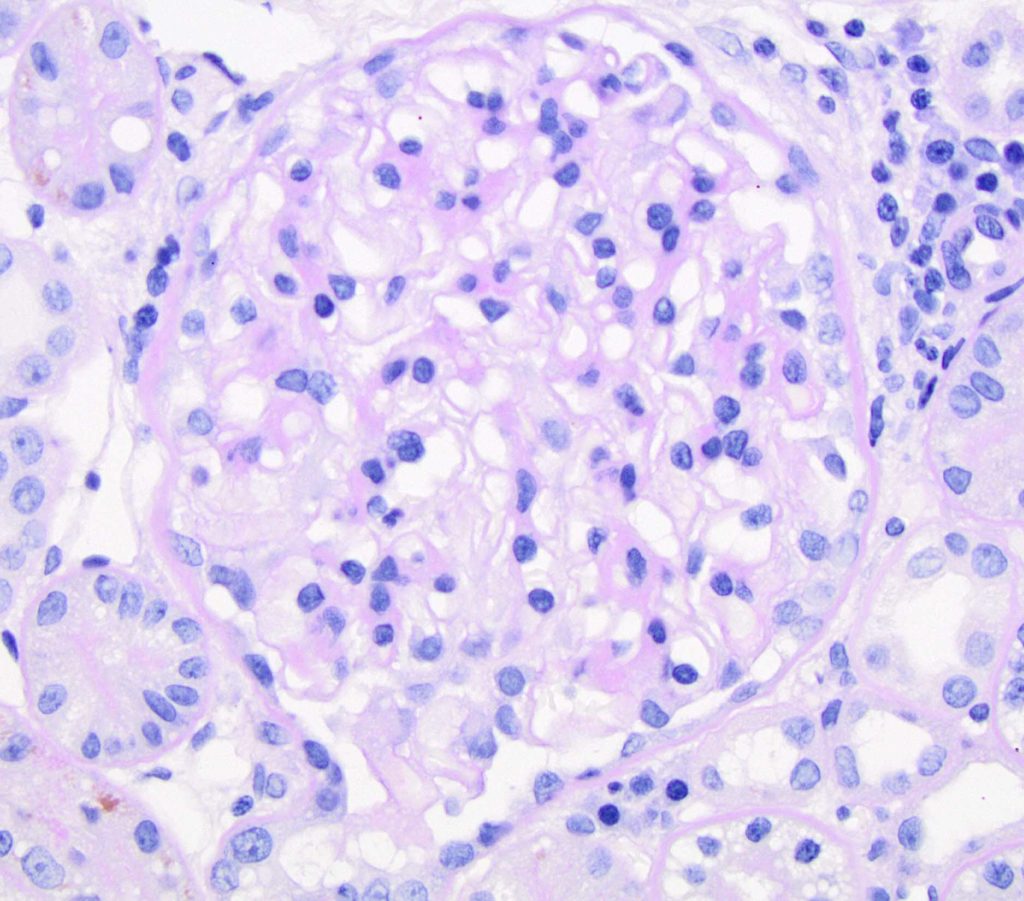 FIG.2B (PAS): GBM are mildly thickened, and the glomerulus is normocellular. 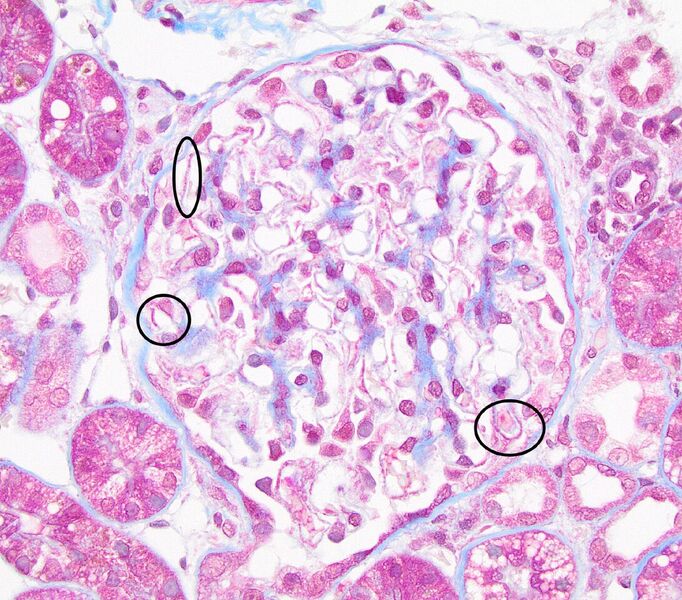 FIG.2C (MT): There are many capillary loops with discrete, small, fuchsinophilic nodules, which are consistent with immune deposits (circled). 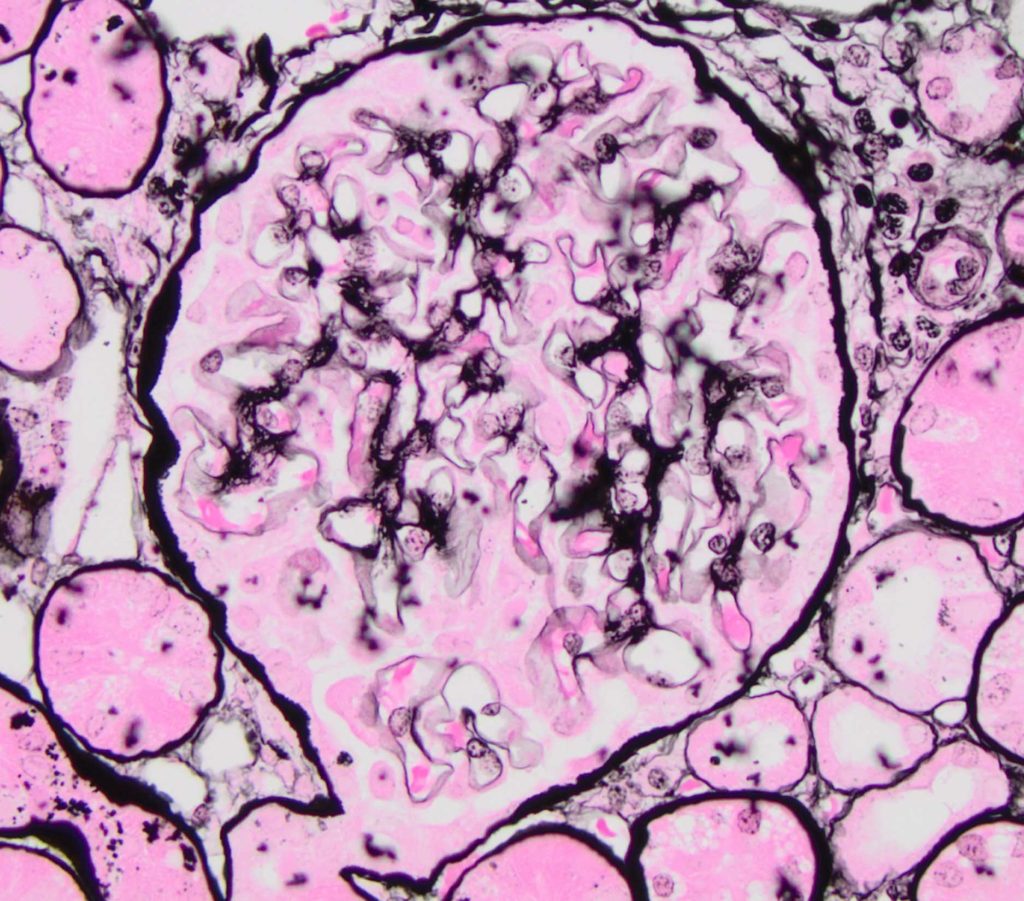 FIG.2D (JMS): The GBM appears normal. There is no evidence of GBM remodeling. 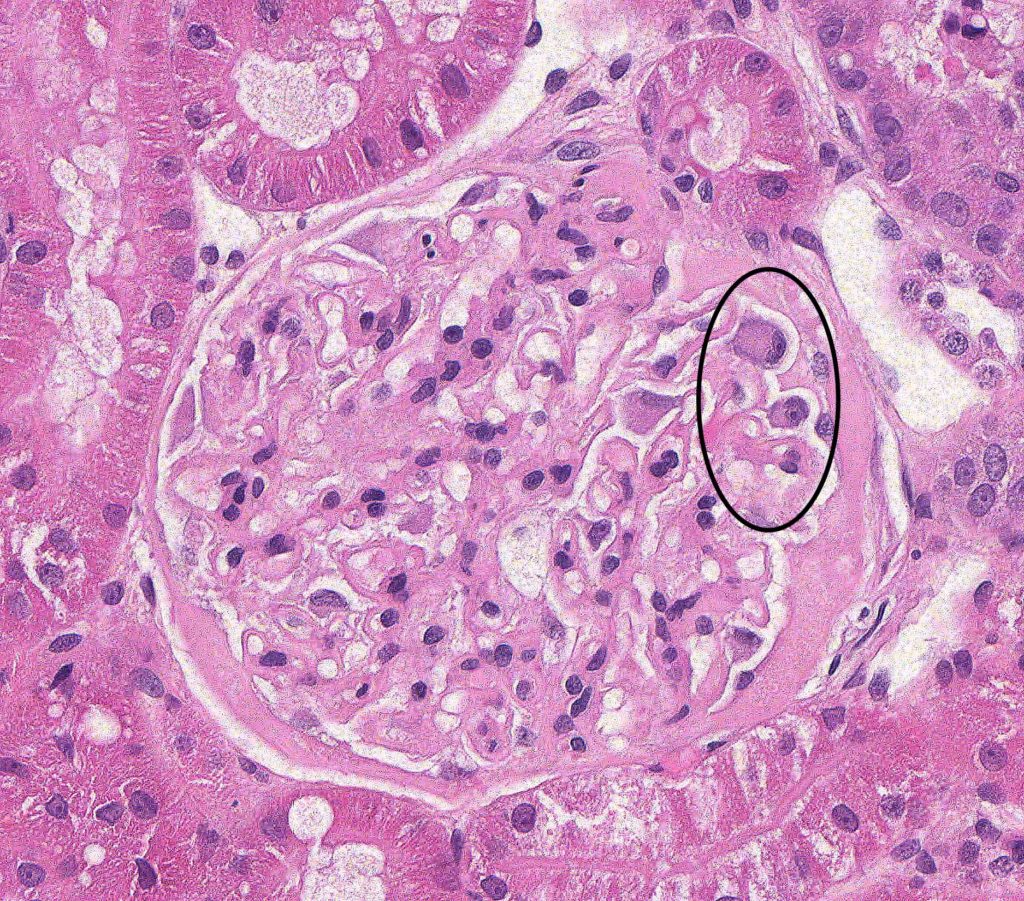 FIG.3A (HE): Most glomeruli have mild to moderately thickened capillary walls. In this glomerulus, there is also evidence of diffuse podocyte hypertrophy (circled) and a thickened Bowman’s capsule. 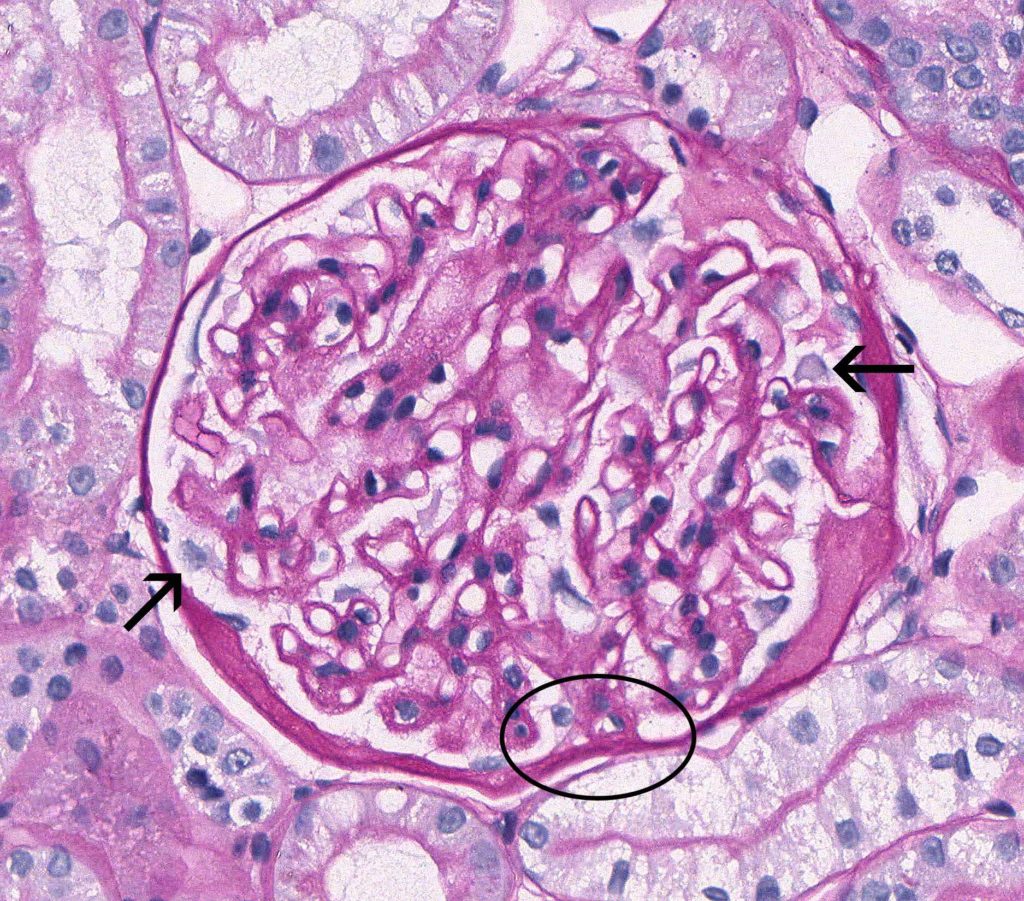 FIG.3B (PAS): Glomeruli have mildly to moderately thickened capillary walls, and podocytes are often hypertrophic (arrow). There is a focal synechia (circled).  Bowman’s capsule basement membrane is expanded by insudated proteinaceous fluid (hyalinosis). Capillary lumens are open and endocapillary hypercellularity is not a feature. 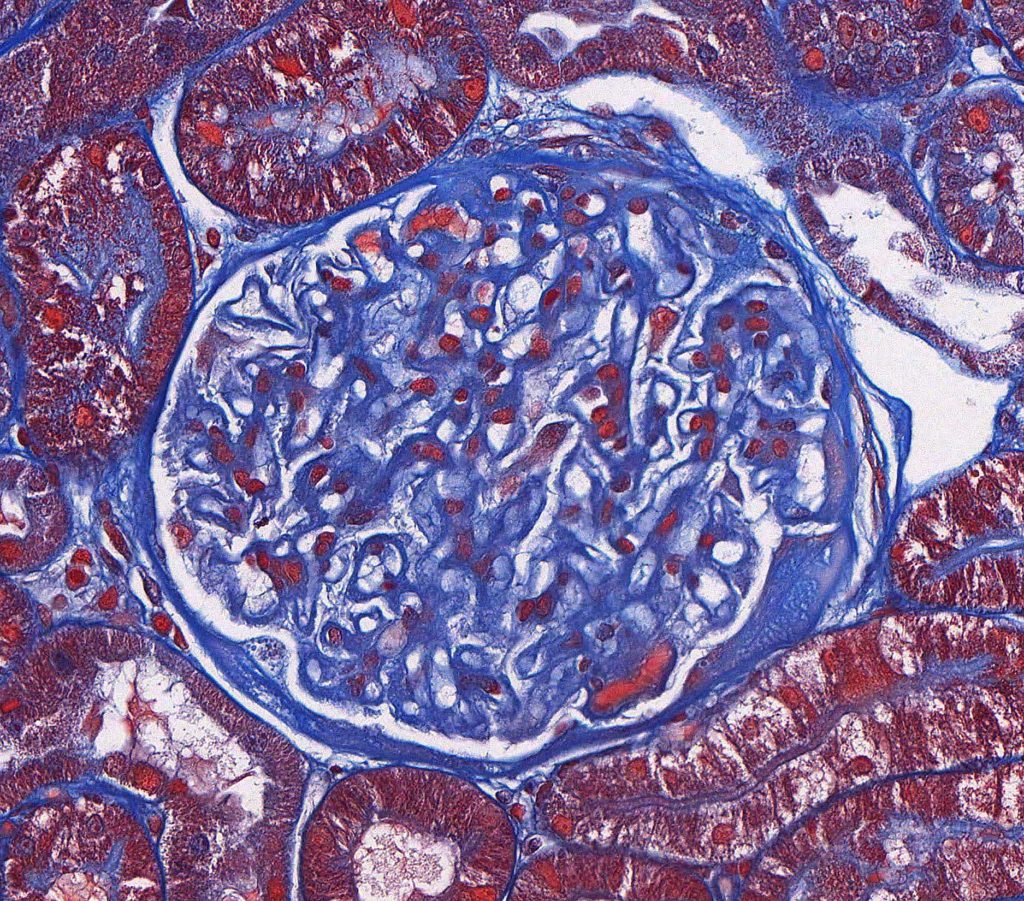 FIG.3C (MT): Glomeruli have mild to moderately thickened capillary walls. Fuchsinophilic deposits are not evident in this glomerulus but they might be present in other cases of late MGN.  The thickened Bowman’s capsule has a focus of pale peach hyalinosis. 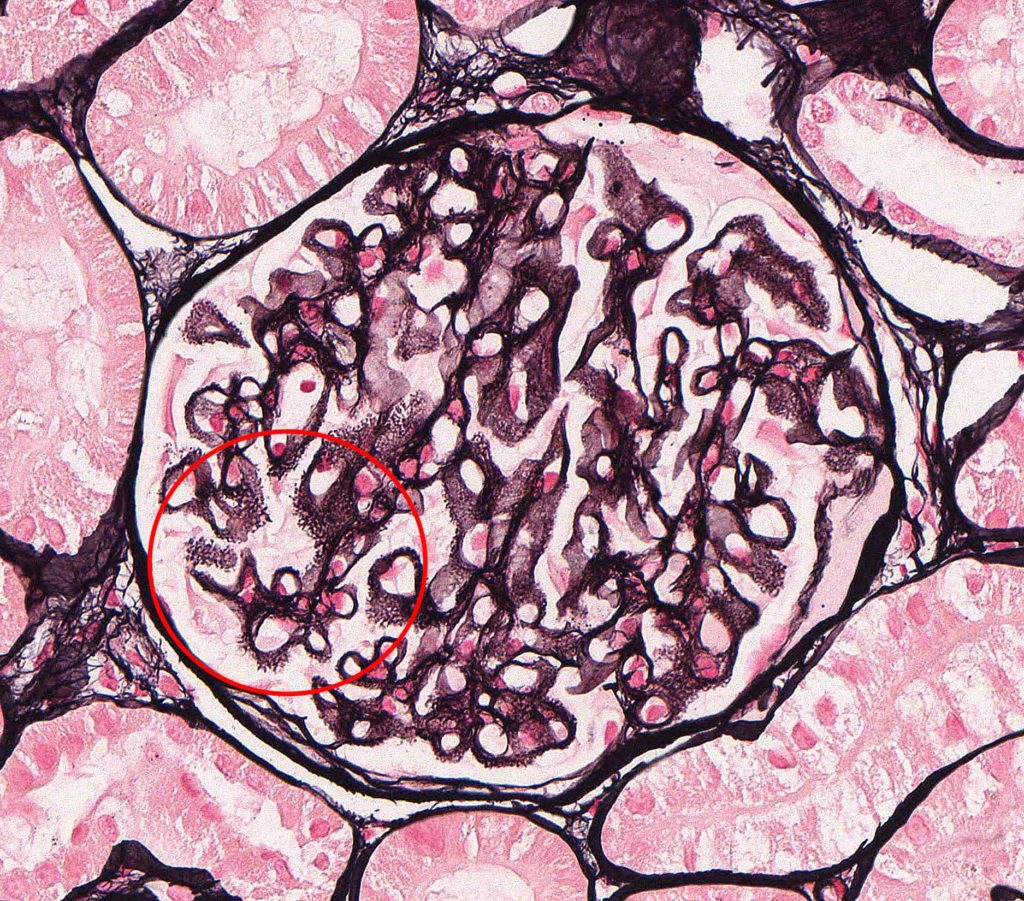 FIG.3D (JMS): In the late stage of MGN, there are frequent spike-like projections and holes, indicative of GBM remodeling (circled).

ADVANCED MEMBRANOUS GLOMERULONEPHROPATHY:  Immune complex deposits and/or GBM remodeling are obvious throughout most glomeruli. There is often secondary segmental sclerosis 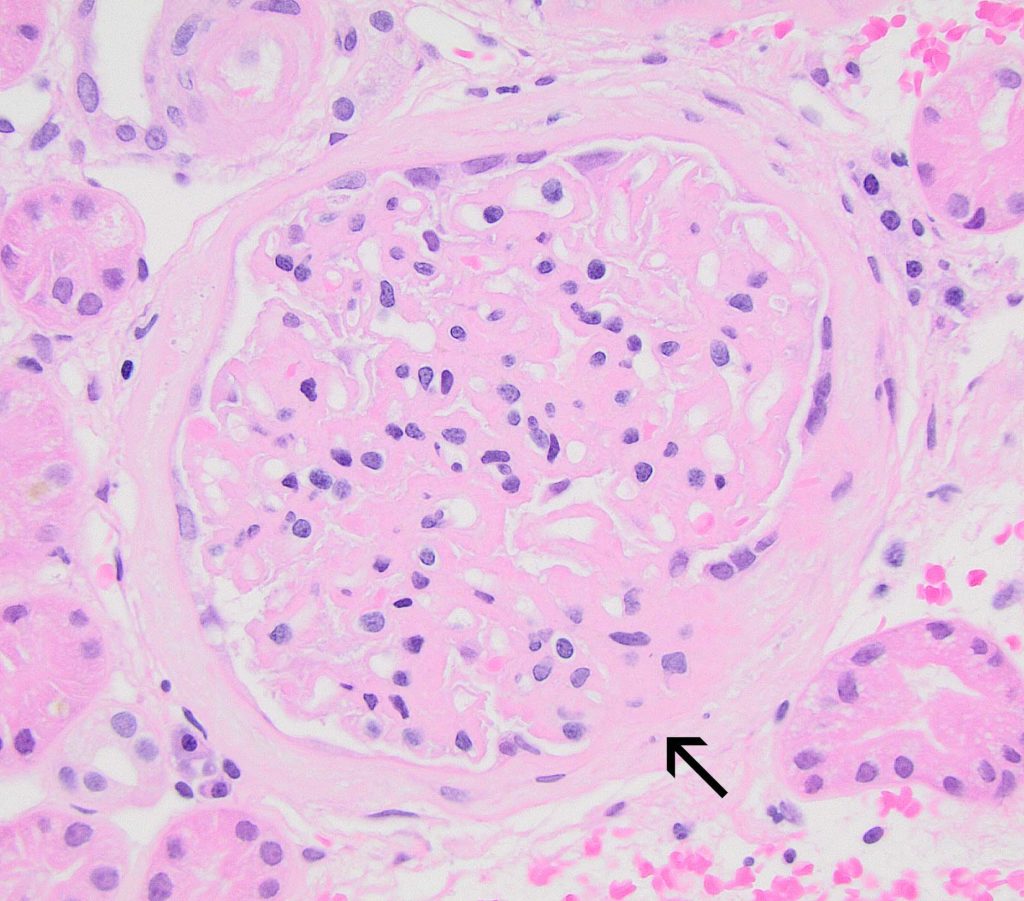 FIG.4A (HE): There is diffuse, marked thickening of the capillary walls.  A broad synechia is present (arrow). There is thickening and splitting of Bowman’s capsule basement membrane, both of which are non-specific lesions that can be seen with synechiae. 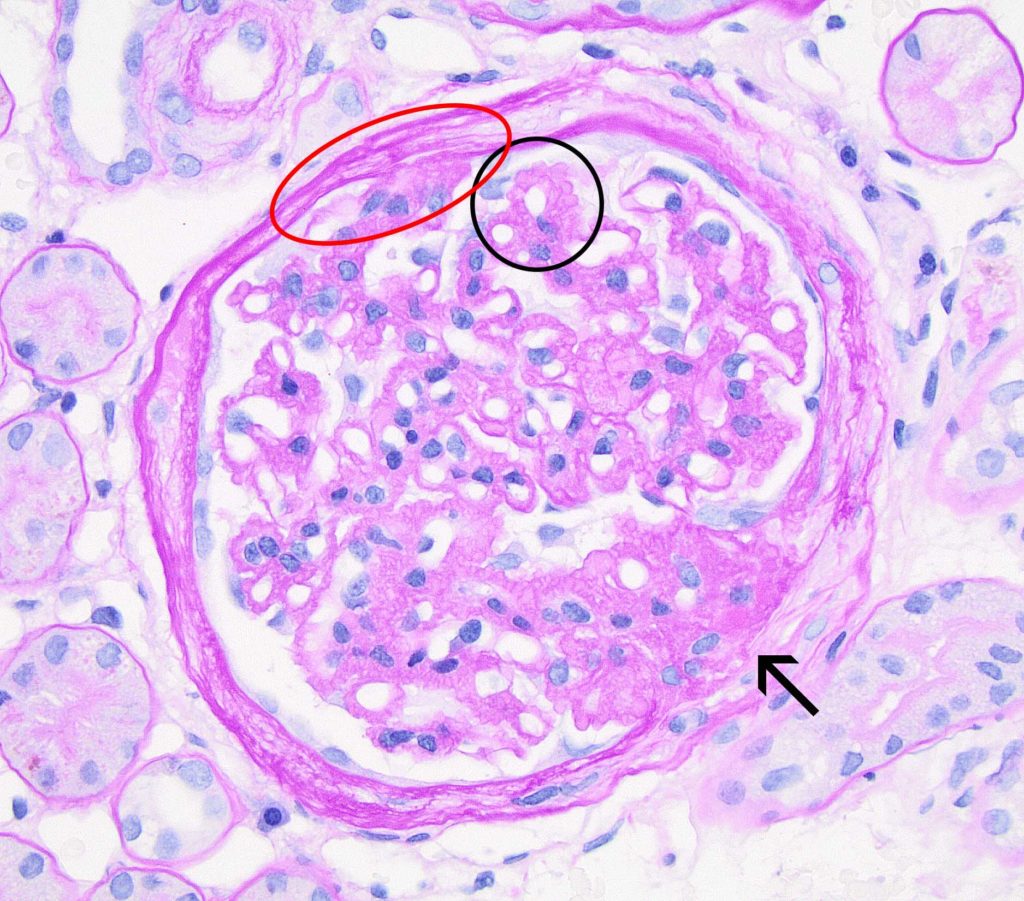 FIG.4B (PAS): There is global remodeling of the GBM (black circle), resulting in marked irregular nodularity of the abluminal (subepithelial surface). Synechia (red circle) and segmental sclerosis with associated synechia (arrow) are frequent at this stage. 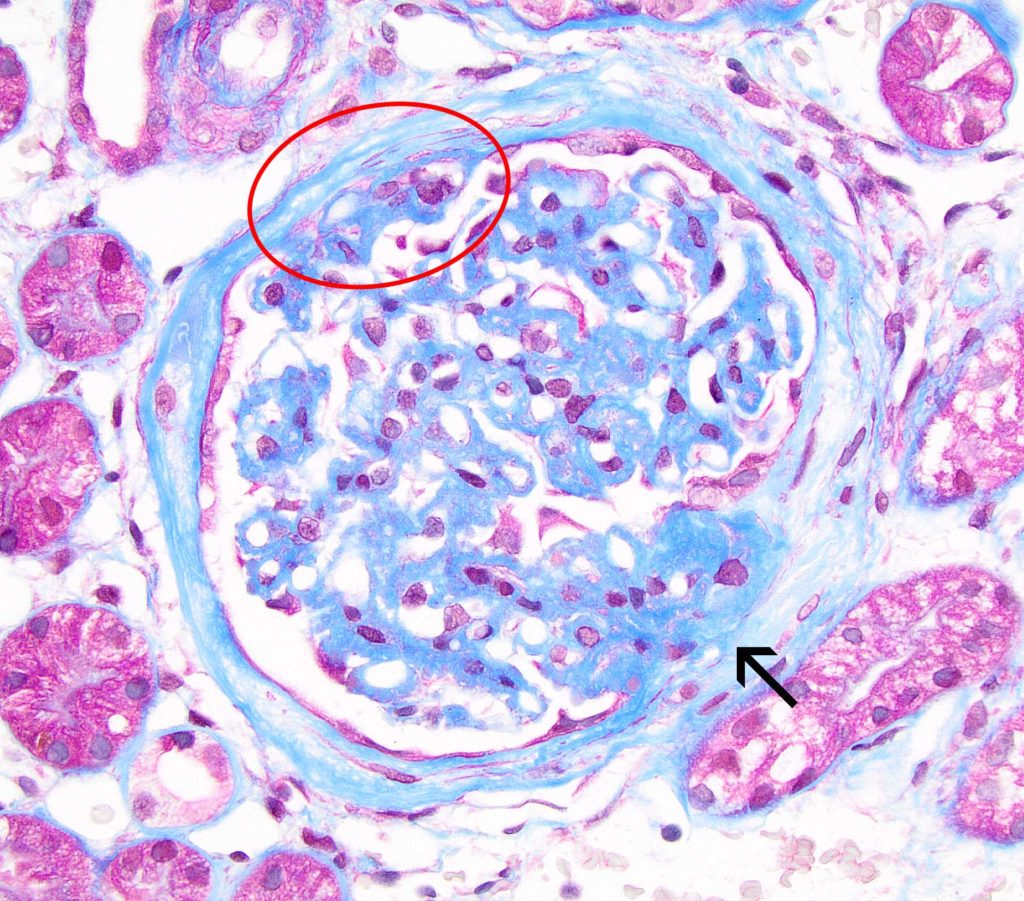 FIG.4C (MT): There is global marked remodeling of the GBM, predominantly affecting the abluminal (subepithelial surface). Synechia (red circle) and segmental sclerosis with associated synechia (arrow) are frequent at this stage.  Fuchsinophilic deposits are not evident in this glomerulus but might be seen in other cases of Late MGN. 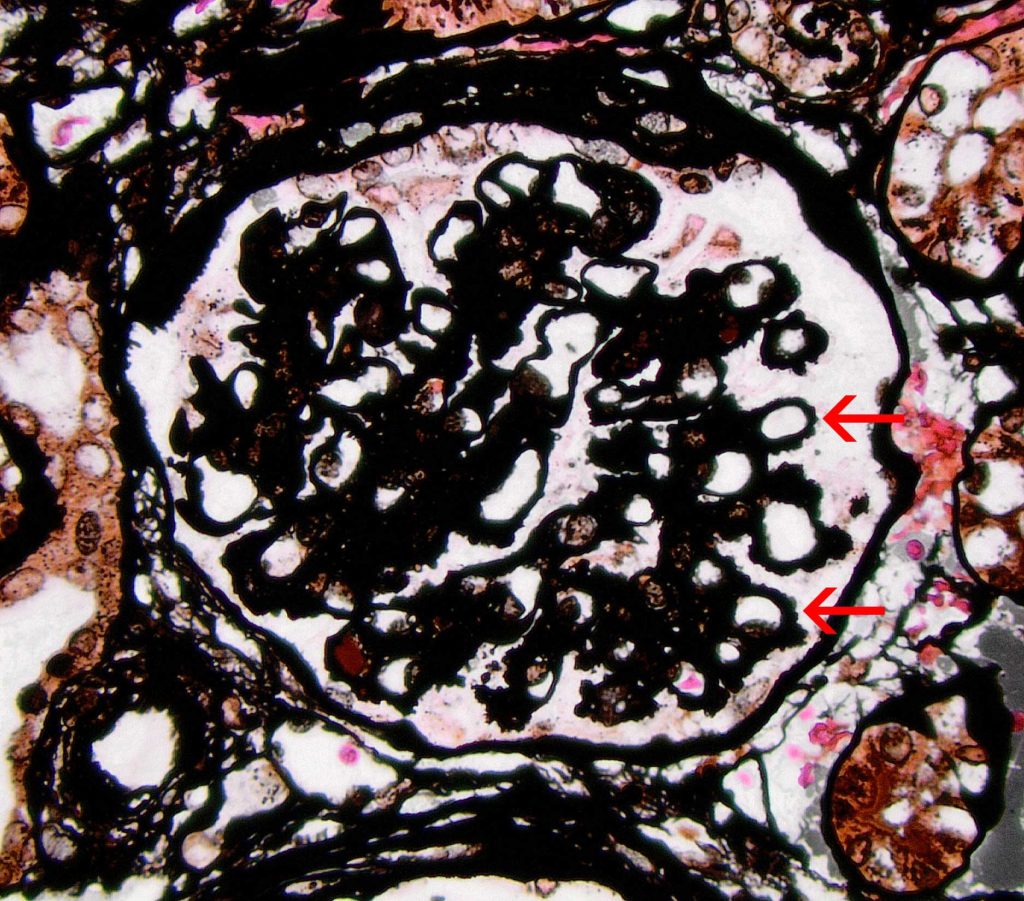 FIG. 5A (TEM): Numerous electron dense deposits are present on the subepithelial surface of the capillary loops. 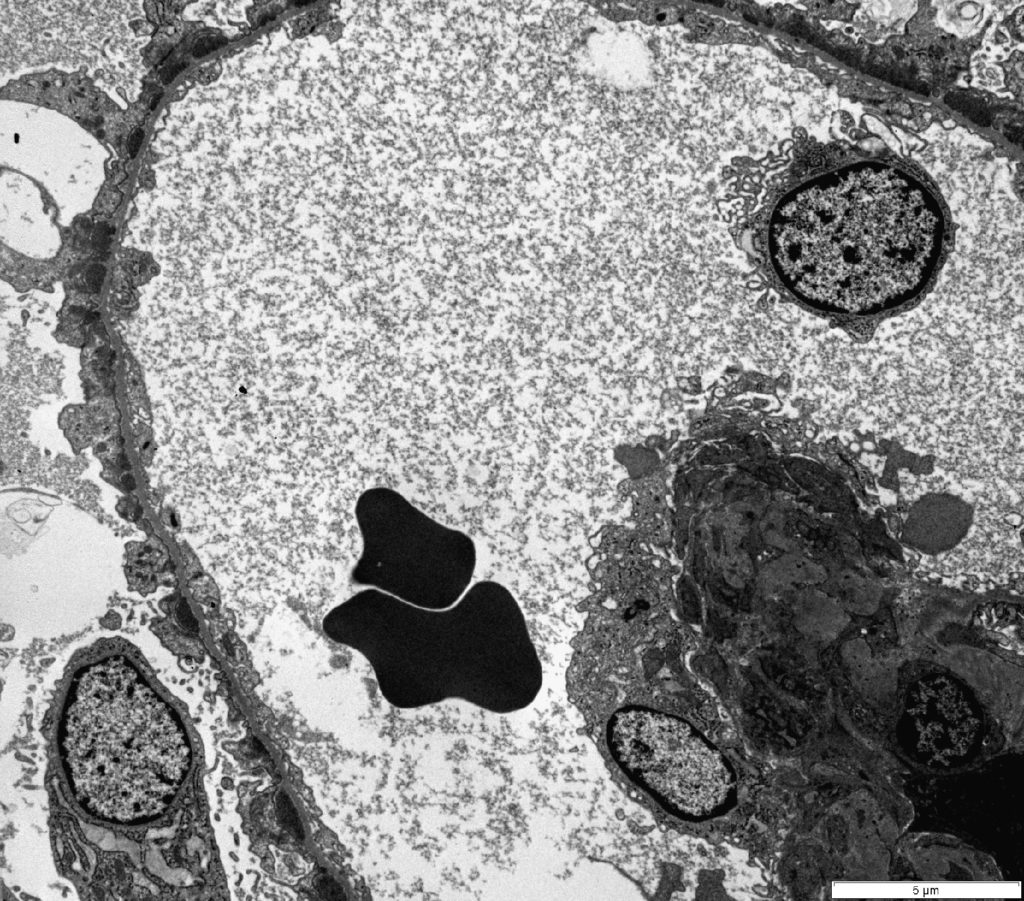 FIG. 5B (TEM): Numerous electron dense deposits are present on the subepithelial surface of the capillary loops and there is minimal remodeling of the GBM. 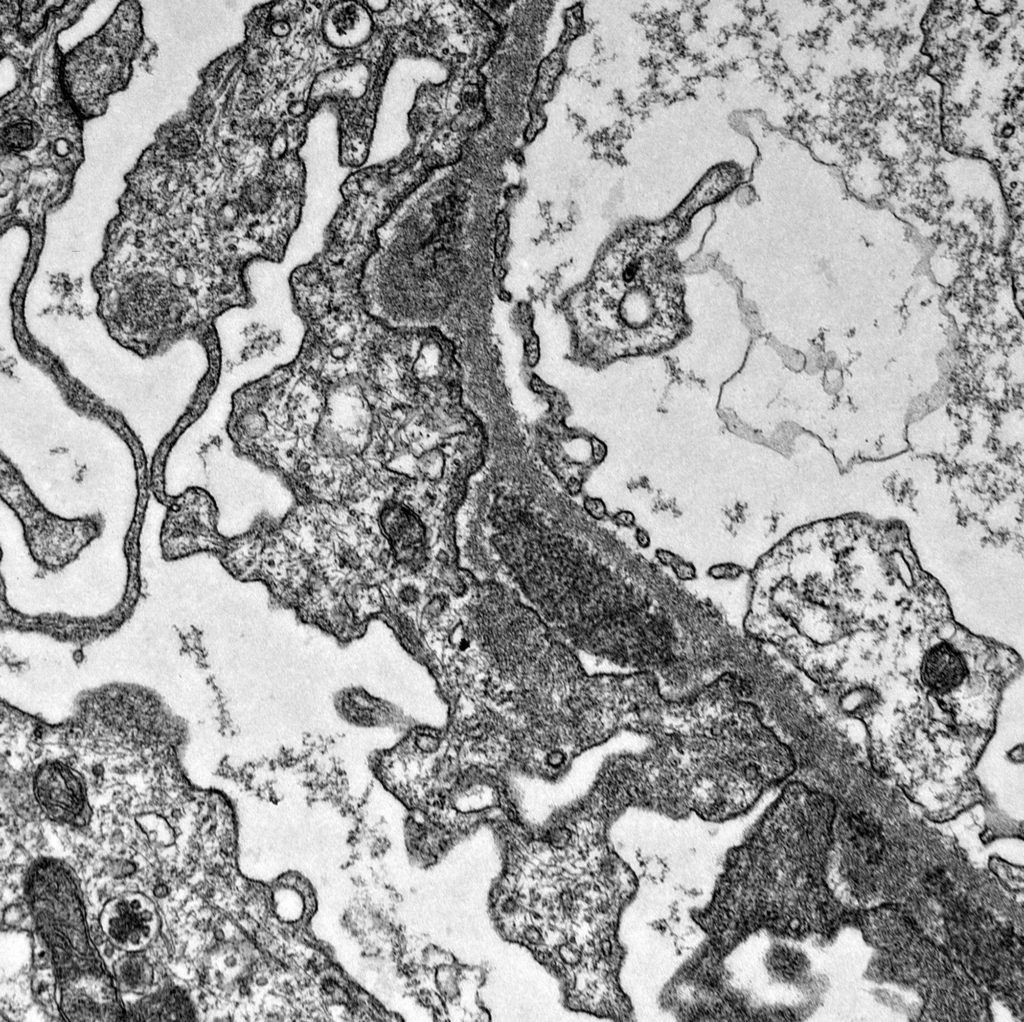 FIG. 5C (TEM): There are small spikes of GBM at each side of the electron dense deposit.  Podocyte foot processes are globally effaced. 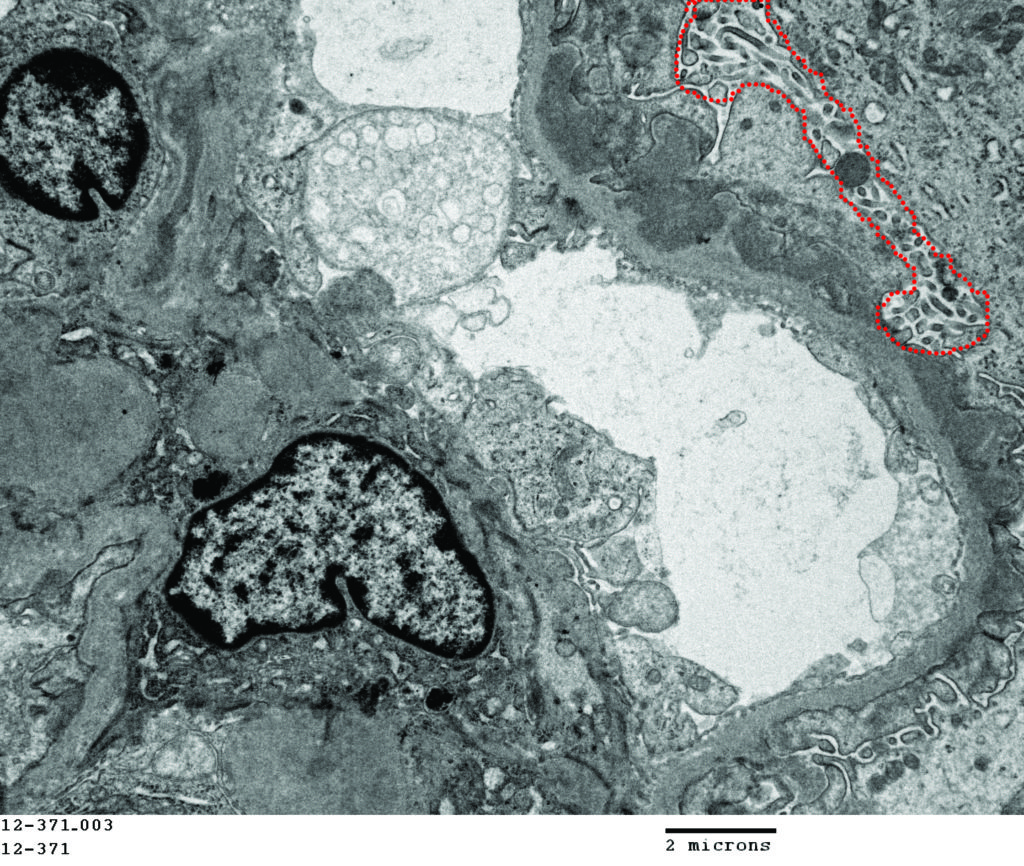 FIG. 5E (TEM): Many large electron dense deposits are along the subepithelial surface of the capillary wall.  Podocyte foot processes are globally effaced and there is microvillus transformation of the cytoplasm (outlined with red dotted line). 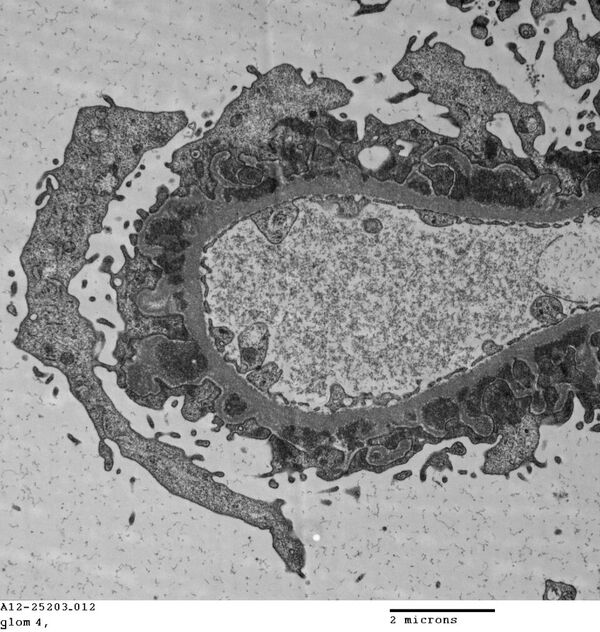 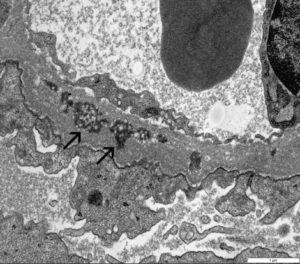 FIG.5I (TEM) Electron dense deposits are encircled by new GBM material and most deposits have a mottled appearance, indicative of resorption (arrows). 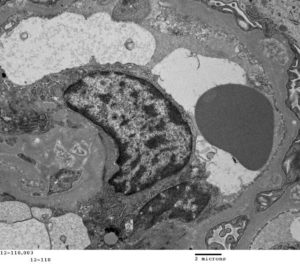 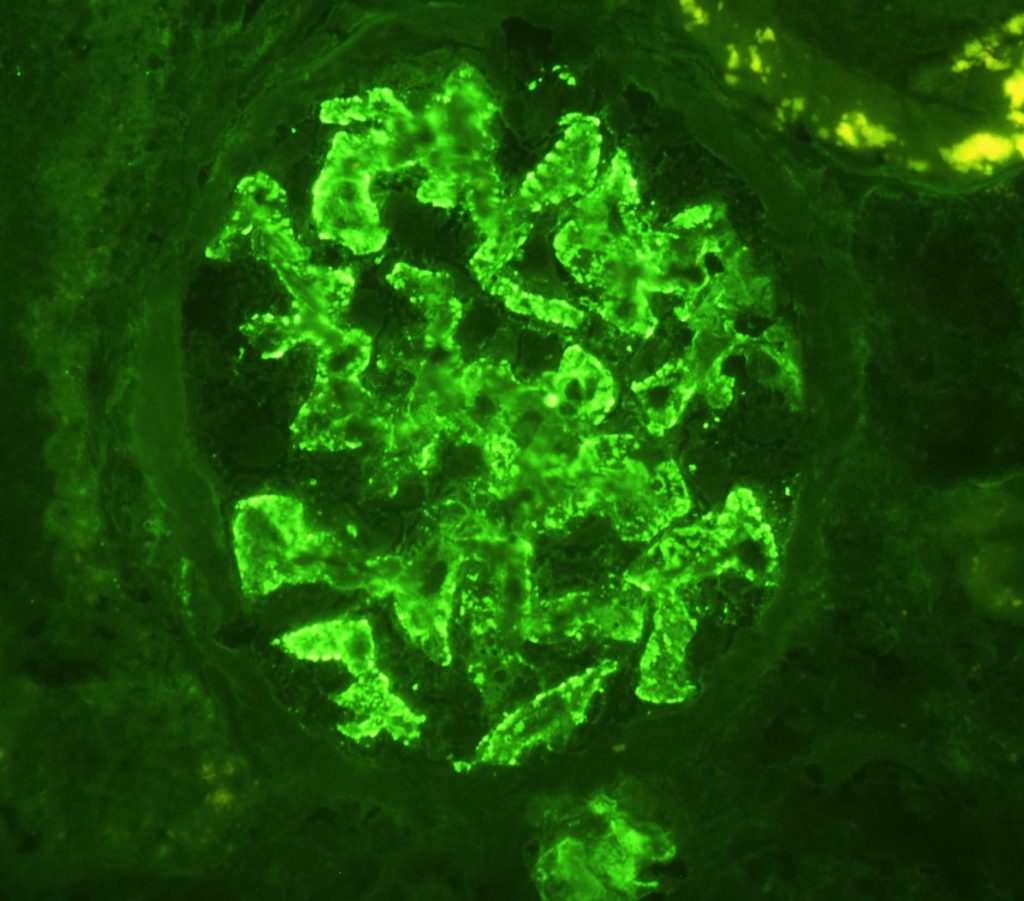 FIG.5L (IF for IgG): There is strong granular labeling along capillary loops. 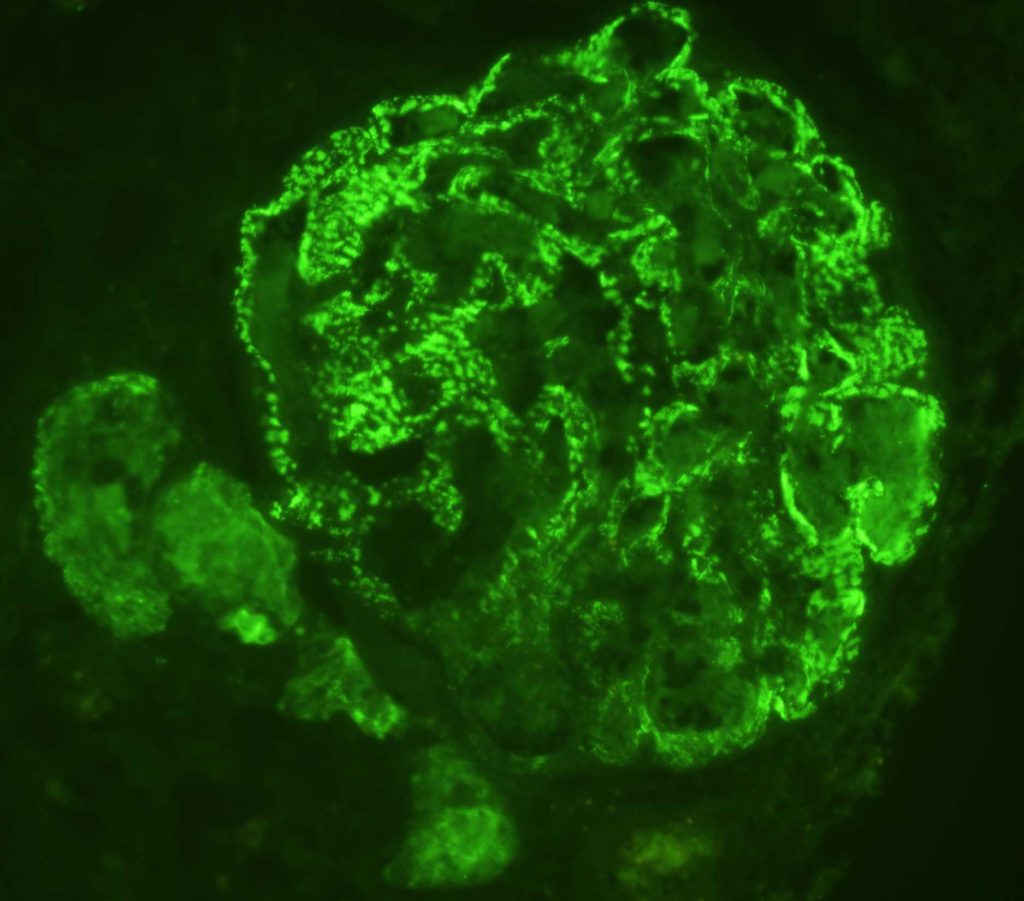 FIG.5M (IF for LLC): There is strong granular labeling along capillary loops.

FIG.6 (Comparison panel of JMS): Glomeruli with early (A), late (B), and advanced (C) GBM remodeling demonstrated by subepithelial spikes and holes on silver stain. These JMS stains are the same images as above (Figures 2D, 3D and 4D).