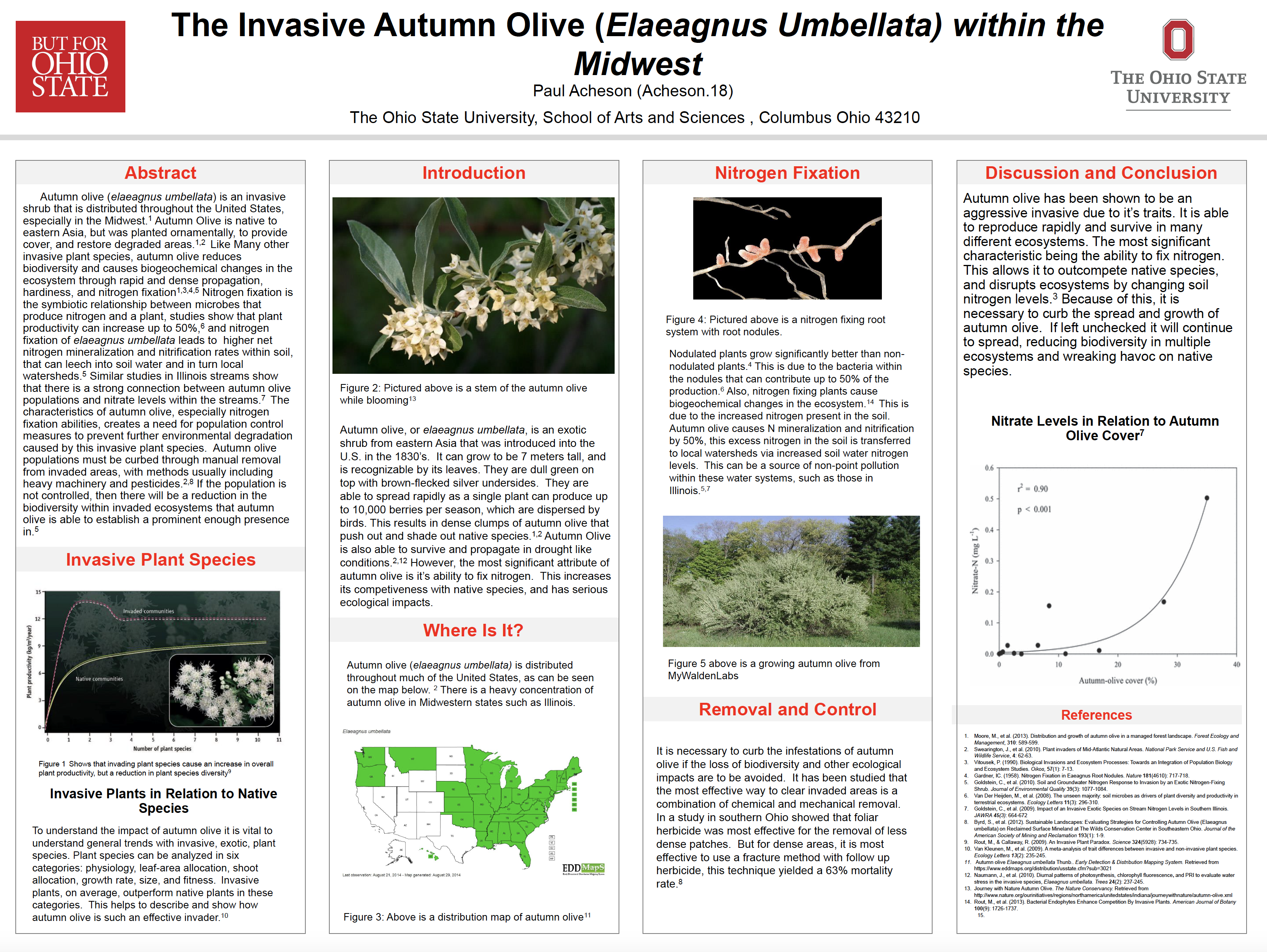 The cane toad is an invasive species that was brought to Australia in hopes of controlling beetle populations.  However, the species soon spread across the country and was seen as a threat.  Similar to the cane toad, the Autumn Olive was introduced in the Midwestern United States to restore degraded areas.  However, a different outcome now plagues this part of the country.

Read the entire transcript of the poster below to learn more about this invasive species.

The Autumn olive (elaeagnus umbellata) is an invasive shrub that is distributed throughout the United States, especially in the Midwest. 1  Autumn Olive is native to eastern Asia, but was planted ornamentally, to provide cover, and restore degraded areas. 1,2 Like Many other invasive plant species, autumn olive reduces biodiversity and causes biogeochemical changes in the ecosystem through rapid and dense propagation, hardiness, and nitrogen fixation. 1,3,4,5 Nitrogen fixation is the symbiotic relationship between microbes that produce nitrogen and a plant, studies show that plant productivity can increase up to 50%,6 and nitrogen fixation of alaeagnus umbellata leads to higher net nitrogen mineralization and nitrification rates within soil, that can leech into soil water and in turn local watersheds.5 Similar studies in Illinois streams show that there is a strong connection between autumn olive populations and nitrate levels within the streams.7 The characteristics of autumn olive, especially nitrogen fixation abilities, creases a need for population control measures to prevent further environmental degradation caused by this invasive plant species. Autumn olive populations must be curbed through manual removal from invaded areas, with methods usually including heavy machinery and pesticides.2,8 If the population is not controlled, then there will be a reduction in the biodiversity within invaded ecosystems that autumn olive is able to establish a prominent enough presence in.5

Figure 1: Shows that invading plant species cause an increase in overall plant productivity, but a reduction in plant species diversity.9 To understand the impact of autumn olive it is vital to understand general trends with invasive, exotic, plant species. Plant species can be analyzed in six categories, physiology, leaf-area allocation, shoot allocation, growth rate, size, and fitness. Invasive plants, on average, outperform native plants in these categories. This helps to describe and show how autumn olive is such an effective invader.10

Figure 2: Pictures above is a stem of the autumn olive while blooming.13 Autumn olive, or elaeagnus umbellata, is an exotic shrub from eastern Asia that was introduced into the U.S. in the 1830’s. It can grown to be 7 meters tall, and is recognizable by its leaves. They are dull green on top with brown-flecked silver undersides. They are able to spread rapidly as a single plant can produce up to 10,000 berries per season, which are dispersed by birds. This results in dense clumps of autumn olive that push out and shade out native species.1,2 Autumn Olive is able able to survive and propagate in drought like conditions.2,12 However, the most significant attribute of autumn olive is its ability to fix nitrogen. This increases its competitiveness with native species, and has serious ecological impacts.

Autumn olive (elaeagnus umbellata) is distributed throughout much of the United States, as can be seen on the map below.2 There is a heavy concentration of autumn olive in Midwestern states such as Illinois.

Figure 4: Pictured above is a nitrogen fixing root system with root nodules. Nodulated plants grow significantly better than non-nodulated plants.4 This is due to the bacteria within the nodules that can contribute up to 50% of the production.6 Also nitrogen fixing plants cause biogeochemical changes in the ecosystem.14 This is due to the increased nitrogen present in the soil. Autumn olive causes N mineralization and nitrification by 50%, this excess nitrogen in the soil is transferred to local watersheds via increased soil water nitrogen levels. This can be a source of non-point pollution within these water systems, such as those in Illinois.5,7 Figure 5. Above is a growing autumn olive from MyWaldenLabs.

It is necessary to curb the infestations of autumn olive if the loss of biodiversity and other ecological impacts are to be avoided. It has been studied that the most effective way to clear invaded areas is a combination of chemical and mechanical removal. In a study in southern Ohio showed that folic herbicide was more effective for the removal of less dense patches. But for dense areas, it is most effective to use a fracture method with follow up herbicide, this technique yielded a 63% mortality rate.8

Autumn olive has been shown to be an aggressive invasive due to it’s traits. It is able to reproduce rapidly and survive in many different ecosystems. The most significant characteristic being the ability to fix nitrogen. This allows it to outcompete native species, and disrupts ecosystems by changing soil nitrogen levels.8 Because of this, it is necessary to curb the spread and growth of autumn olive. If left unchecked it will continue to spread, reducing biodiversity in multiple ecosystems and wreaking havoc on native species. Figure 6. Nitrate levels in relation to autumn olive cover. A graph shows a y-axis with Nitrate levels (mg/L) and x-axis with autumn olive cover (%).