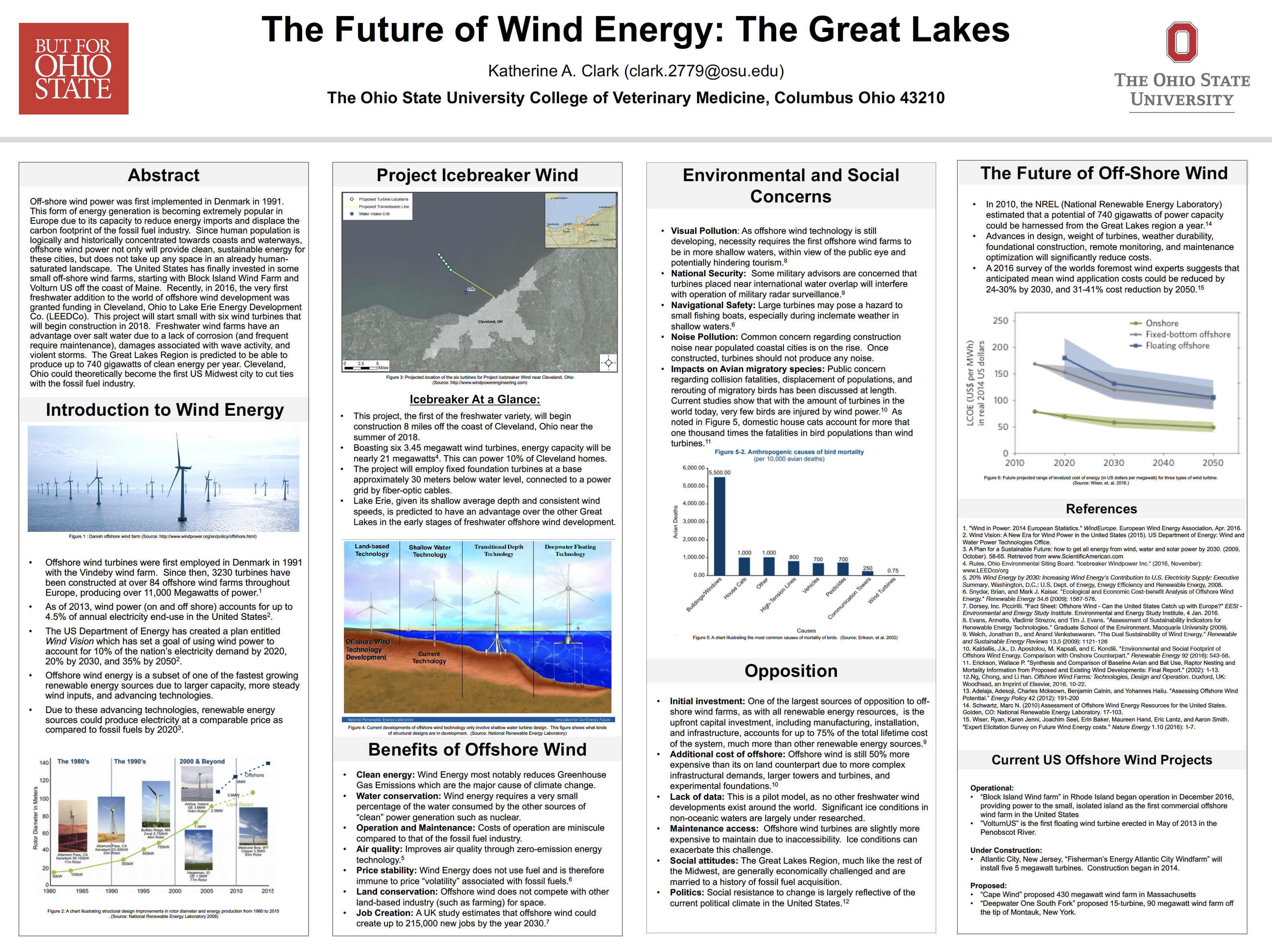 As seen in the last section, the use of renewable energy is on the rise. Here a student explores another source of alternative energy, offshore wind power.

Read the entire transcript of the poster below to learn more about the use of wind turbines in offshore locations.

Off-shore wind power was first implemented in Denmark in 1991. This form of energy generation is becoming extremely popular in Europe due to its capacity to reduce energy imports and displace the carbon footprint of the fossil fuel industry. Since human population is logically and historically concentrated towards coasts and waterways, offshore wind power all not only provide clean, sustainable energy for these cities, but does not take up any space in an already human-saturated landscape. The United States has finally invested in some small off-shore wind farms, starting with Block Island Wind Farm and Volturn US off the coast of Maine. Recently in 2016, the very first freshwater addition to the world of offshore wind development was granted funding in Cleveland, Ohio to Lake Erie Energy DevelopmentCo. (LEEDCo). This project will start small with six wind turbines that will begin construction in 2018. Freshwater wind farms have an advantage over salt water due to a lack of corrosion (and frequent require maintenance), damages associated with wave activity, and violent storms. The Great Lakes Region is predicted to be able to produce up to 740 gigawatts of clean energy per year. Cleveland, Ohio could theoretically become the first US Midwest city to cut ties with the fossil fuel industry.

Figure 1: Danish offshore wind farm with many rows of wind turbines rising out of the water. Offshore wind turbines were first employed in Denmark in 1991 with the Vindeby wind farm. Since then, 3230 turbines have been constructed at over 84 offshore wind farms throughout Europe, producing over 11,000 Megawatts of power.1 As of 2013, wind power (on and off shore) accounts for up to 4.5% of annual electricity end-use in the United States.2 The US Department of Energy has created a plan entitled Wind Vision which has set a goal of using wind power to account for 10% of the nation’s electricity demand by 2020, 20% by 2030, and 35% by 2050.2 Offshore wind energy ir a subset of one of the fastest growing renewable energy sources due to larger capacity, more steady wind inputs, and advancing technologies. Due to these advancing technologies, renewable energy sources could produce electricity at a comparable price as compared to fossil fuels by 2020.3 Figure 2: A chart illustrating structural design improvements in rotor diameter and energy production from 1980 to 2015.

Figure 3: Projected location of the six turbines for Project Icebreaker Wind near Cleveland, Ohio via a satellite map. Icebreaker at a Glance: This project, the first of the freshwater variety, will begin construction 8 miles off the coast of Cleveland, Ohio near the summer of 2018. Boasting six 3.45 megawatt wind turbines, energy capacity will be nearly 21 megawatts.4 This can power 10% of Cleveland homes. The project will employ fixed foundation turbines at a base approximately 30 meters below water level, connected to a power grid by fiber-optic cables. Lake Erie, given its shallow average depth and consistent wind speeds, is predicted to have an advantage over the other Great Lakes in the early stages of freshwater offshore wind development. Figure 4: Current development of offshore wind technology only involves shallow water turbine design. This shows what kinds of structural designs are in developments from the National Renewable Energy Laboratory.

The Future of Off-Shore Wind: