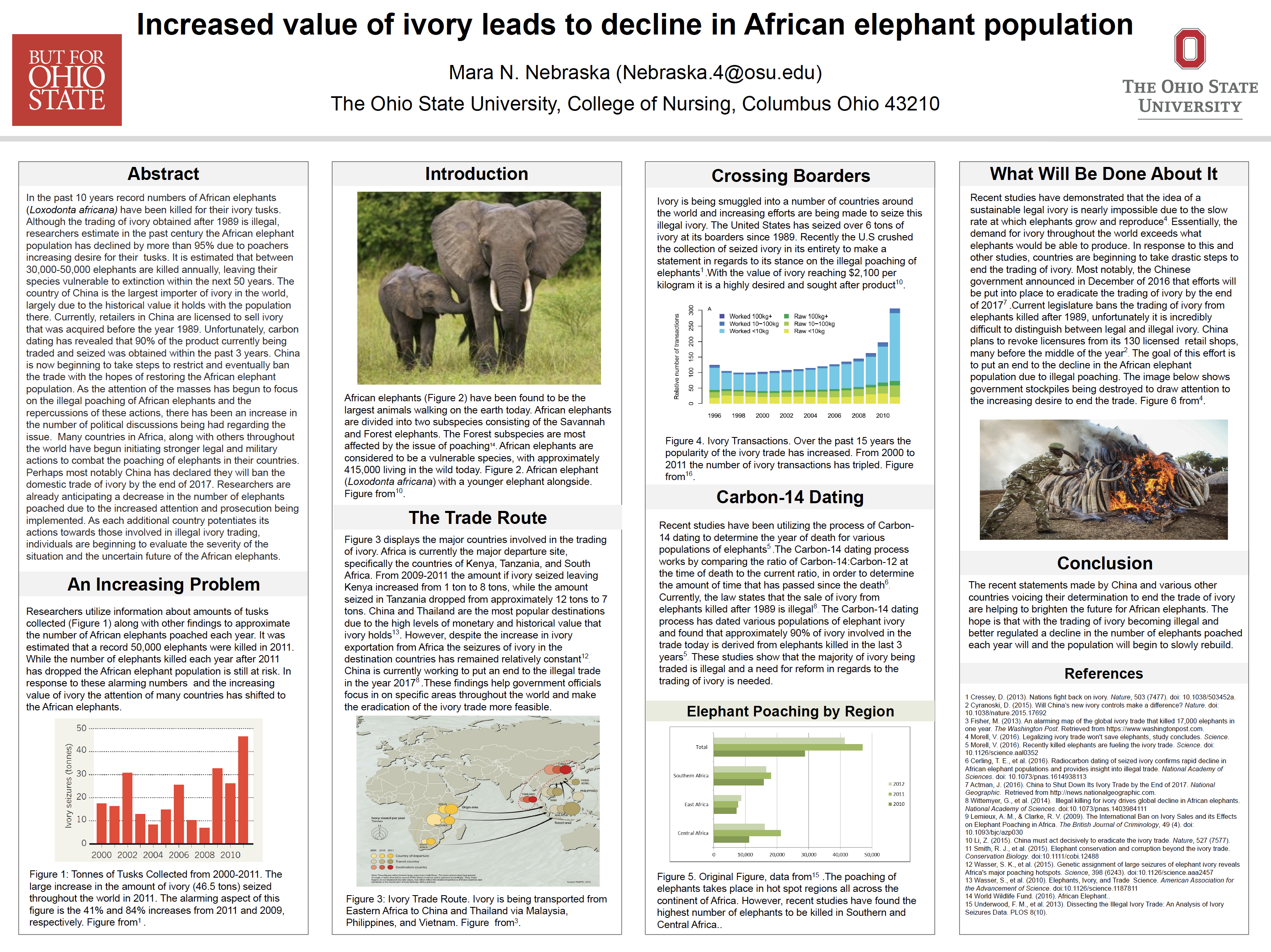 Rhinoceros are not the only species in danger when it comes to the ivory trade.  Elephant populations have also seen a large decline due to poaching, as their tusks are a highly sought after source of ivory.

Read the entire transcript of the poster below to learn more about the elephant ivory trade.

In the past 10 years record numbers of African elephants (Loxodonta africana) have been killed for their ivory tusks. Although the trading of ivory obtained after 1989 is illegal, researchers estimate in the past century the African elephant population has declined by more than 95% due to poachers increasing desire for their tusks. It is estimated that between 30,000-50,000 elephants are killed annually, leaving their species vulnerable to extinction within the next 50 years. The country of China is the largest importer of ivory in the world, largely due to the historical value it holds with the population there. Currently, retailers in China are licensed to sell ivory that was acquired before the year 1989. Unfortunately, carbon dating has revealed that 90% of the product currently being traded and served was obtained in the past 3 years. China is now beginning to take steps to restrict and eventually ban the trade with the hopes of restoring the African elephant population. As the attention of the masses has begun to focus on the illegal poaching of African elephants and the repercussions of these actions, there has been an increase in the number of political discussions being had regarding the issue. Many countries in Africa, along with others throughout the world have begun initiating stronger legal and military actions to combat the poaching of elephants in their counties. Perhaps most notably China has declared they will ban the domestic trade of ivory by the end of 2017. Researchers are already anticipating a decrease in the number of elephants poached due to the increased attention and prosecution being implemented. As each additional country potentiates its actions towards those involved in illegal ivory trading, individuals are beginning to evaluate the severity of the situation and uncertain future of the African elephants.

Researchers utilize information about amounts of tusks collected (Figure 1) along with other findings to approximate the number of African elephants poached each year. It was estimated that a record 50,000 elephants were killed in 2011. While the number of elephants killed each year after 2011 has dropped the African elephant population is still at risk. In response to these alarming numbers and the increasing value of ivory the attention of many countries has shifted to the African elephants. Figure 1: bar graph showing Tonnes of Tusks collected from 2000-2011. The large increase in the amount of ivory (46.5 tons) seized throughout the world in 2011. The alarming aspect of this figure is the 41% and 84% increases from 2011 and 2009, respectively.1

Figure 3 displays the major countries involved in the trading ivory. Africa is currently the major departure site, specifically the countries or Kenya, Tanzania, and South Africa. From 2009-2011 the amount of ivory seized leaving Kenya increased from 1 ton to 8 tons, while the amount seized in Tanzania dropped from approximately 12 tons to 7 tons. China and Thailand are the most popular destinations due to the high levels of monetary and historical value that ivory holds.13 However, despite the increase in ivory exportation from Africa the seizures of ivory in the designation countries has remained delicately constants.12 China is currently working to put an end to the illegal trade in the year 2017.8 These findings help government officials focus in on specific areas throughout the world and make the eradication of the ivory trade more feasible. Figure 3: Ivory Trade Route. Ivory is being transported from Eastern Africa to China and Thailand via Malaysia. Philippines, and Vietnam. Figure from 3.

Ivory is being smuggled into a number of countries around the world and increasing efforts are being made to sieve this illegal ivory. The United States has served over 6 tons of ivory at its boarders since 1989. Recently the U.S. crushed the collection of seized ivory in its entirety to make a statement in regards to its stance on the illegal poaching of elephants.1 With the value of ivory reaching $2,100 per kilogram it is a highly desired and sought after product.10 Figure 4: Ivory Transactions. Over the past 15 years the popularity of the ivory trade has increased. From 2000 to 2011 the number of ivory transactions has tripled.16

Recent studies have been utilizing the process of Carbon-14 dating to determine the year of death for various populations of elephants.5 The Carbon-14 dating process works by comparing the ratio of Carbon-14:Carbon 12 at the time that has passed since the death.6 Currently, the law states that the sale of ivory from elephants killed after 1989 is illegal.8 The Carbon-14 dating process has dated various populations of elephant ivory and found that approximately 90% of ivory involved in the trade today is derived from elephants killed in the last 3 years.5 These studies show that the majority of ivory being traded is illegal and a need for reform in regards to the trading of ivory is needed.

Elephant Poaching by Region:
Figure 5. The poaching of elephants takes place in hot spot regions all across the continent of Africa. However, recent studies have found the highest number of elephants to be killed in Southern and Central Africa.15

What Will Be Done About It:

Recent studies have demonstrated that the idea of a sustainable legal ivory is nearly impossible due to the slow rate at which elephants grow and reproduce.4 Essentially, the demand for ivory throughout the world exceeds what elephants would be able to produce. In response to this and other studies, countries are beginning to take drastic steps to end the trading of virus. Most notably, the Chinese government announced in December of 2016 that efforts will be put into place to eradicate the trading of ivory by the end of 2017.7 Current legislature bans the trading of ivory from elephants killed after 1989, unfortunately it is incredibly difficult to distinguish between legal and illegal ivory. China plans to revoke licensure from its 130 licensed retail shops, many before the middle of the year.2 The goal of this effort is to put an end to the decline in the African elephant population due to illegal poaching. The image below shows government stockpiles being destroyed to draw attention to the increasing desire to end trade.4

The recent statements made by China and various other countries voicing their determination to end the trade of ivory are helping to brighten the future for African elephants. The hope it that with the trading of ivory becoming illegal and better regulations a decline in the number of elephants poached each year will occur and the population will begin to slowly rebuild.