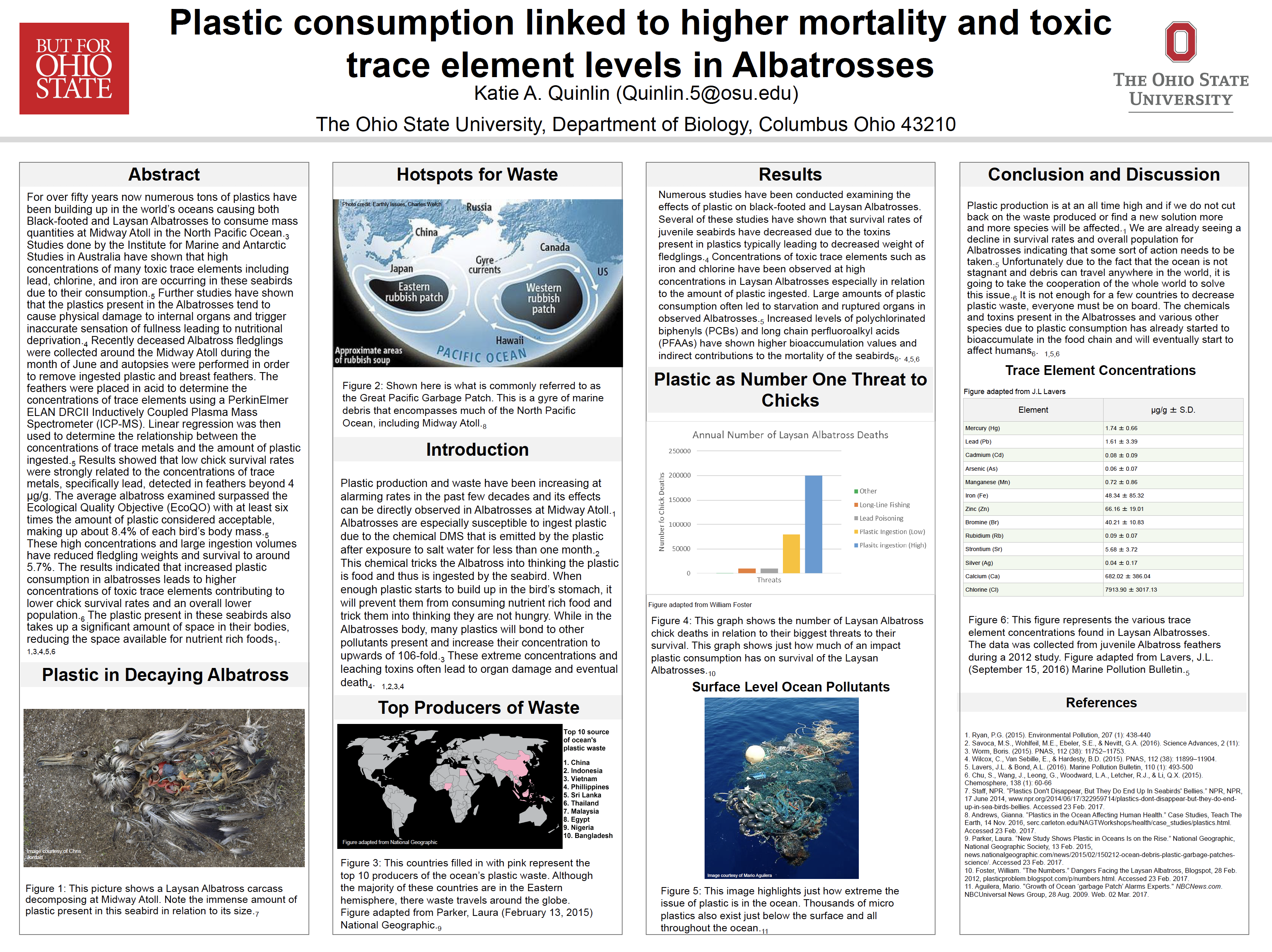 Plastic waste affects a plethora of marine and terrestrial organisms.  In the previous section you learned about one affected seabird, the albatross.

Read the entire transcript of the poster below to discover more about how the consumption of plastic materials is altering the albatross’ life cycles.

For over fifty years now numerous tons of plastics have been buildings up in the world’s oceans causing both Black-footed and Laysan Albatrosses to consume mass quantities at Midway Atoll in the North Pacific Ocean. Studies done by the Institute for Marine and Antarctic Studies in Australia have shown that high concentrations of many toxic trace elements including lead, chlorine and iron are occurring in these seabirds due to their consumption. Further studies have shown that the plastics present in the Albatrosses tend to cause physical damage to internal organs and trader inaccurate sensation of fullness leading to nutritional deprivation. Recently decreased Albatross fledglings were collected around the Midway Atoll during the month of June and autopsies were performed in order to remove ingested plastic and breast feathers. The feathers were placed in acid to determine the concentrations of trace elements using a PerkinElmer ELAN DRCII Inductively Coupled Plasma Mass Spectrometer (ICP-MS). Linear regression was then used to determine the relationship between the concentrations of trace metals and the amount of plastic ingested. Results showed the low chick survival rates were strongly related to the concentrations of trace metals, specifically lead, detected in feathers beyond 4 ug/g. The average albatross examined surpassed the Ecological Quality Objective (EcoQO) with at least six times the amount of plastic considered acceptable, making up about 8.4% of each bird’s body mass. These high concentrations and large ingestion volumes have reduced fledging weights and survival to around 5.7%. The results indicated that increased plastic consumption in albatrosses leads to higher concentrations of toxic trace elements contributing to lower chick survival rates and an overall lower population.6 The plastic present in these seabirds also takes up a significant amount of space in their bodies, reducing the space available for nutrient rich foods.

Figure 1: This picture shows a Layman Albatross carcass decomposing at Midway Atoll. Note the immense amount of plastic present in this seabird in relation to its size.7

Figure 2: Shown here is what is commonly referred to as the Great Pacific Garbage Patch. This is a gyre of marine debris that encompasses much of the North Pacific Ocean, including Midway Atoll.8

Plastic production and waste have been increasing at alarming rates in the past few decades and its effects can be directly observed in albatrosses at Midway Atoll.1 Albatrosses are especially susceptible to ingest plastic due to the chemical DMS that is emitted by the plastic after exposure to salt water for less than one month.2 This chemical tricks the Albatross into thinking the plastic is food and this is ingested by the seabird. When enough plastic starts to build up in the bird’s stomach, it will prevent them from consuming nutrient rich food and trick them into thinking they are not hungry. While in the Albatrosses body, many plastics will bond to other pollutants present and increase their concentration to upwards of 106-fold.3 These extreme concentrations and leaching toxins often lead to organ damage and eventual death.1,2,3,4

Top 10 source of ocean’s plastic waste: 1. China 2 Indonesia 3. Vietnam 4. Phillippines 5. Sri Lanka 6. Thailand 7. Malaysia 8. Egypt 9. Nigeria 10. Bangladesh. Figure 3: These countries filled in with pink represent the top 10 producers of the ocean’s plastic waste. Although the majority of these countries are in the Eastern hemisphere, their waste travels around the globe. Figure adapted from Parker, Laura (February 13, 2015) National Geographic.9

Numerous studies have been conducted examining the effects of plastic on black-footed and Laysan Albatrosses. Several of these studies have shown that survival rates of juvenile seabirds have decreased due to the toxins present in plastics typically leading to decreased weight of fledglings.4 Concentrations of toxic trace elements such as iron and chlorine have been observed at high concentrations in Laysan Albatrosses especially in relation to the amount of plastic ingested. Large amounts of plastic consumption often led to starvation and ruptured organs in observed Albatrosses.5 Increased levels of polychlorinated biphenyls (PCBs) and long chain perfuoroalkyl acids (PFAAs) have shown higher bioaccumulation values and indirect contributions to the mortality of the seabirds.4,5,6

Plastic as Number One Threat to Chicks:

Figure 5: This image highlights just how extreme the issue of plastic is in the ocean. Thousands of microplastics also exist just below the surface and all throughout the ocean.

Plastic production is at an all time high and if we do not cut back on the waste produced or find a new solution more and more species will be affected. We are already seeing a decline in survival rates and overall population for Albatrosses indicating that some sort of action needs to be taken.5 Unfortunately due to the fact that the ocean is not stagnant and debris can travel anywhere in the world, it is going to take the cooperation of the whole world to solve this issue.6 It is not enough for a few countries to decrease plastic waste, everyone must be on board. The chemicals and toxins present in the Albatrosses and various other species due to plastic consumption has already started to bioaccumulate in the food chain and will eventually start to affect humans.1,5,6