By the end of this chapter, the student will be able to:

Adverse Childhood Experiences (ACEs): The term used to describe abuse (physical, emotional and sexual), neglect (physical and emotional), and other potentially traumatic experiences that occur to minors less than 18 years of age. This 10-item scale ranges from 0-10 points. The higher number of ACEs, indicates greater risk for vulnerability

According to the Center for Disease Control (2019), Adverse Childhood Experiences (ACEs) is the term used to describe abuse, neglect, and other potentially traumatic experiences that occur to victims less than 18 years of age. Adverse Childhood Experiences include 10 dimensions: 1) physical abuse; 2) emotional abuse; 3) sexual abuse; 4) physical neglect; 5) emotional neglect; 6) substances in the home;7) parental separation/divorce; 8) mental illness; 9) a battered mother; and 10) criminal behaviors/incarceration of family members. The 10 ACEs are assessed using a 10 item scale that results in a total score of 0-10. [See Table 1 for ACEs questions.] As the number of ACEs increases, so does the risk for risky health behaviors, chronic health conditions, and early death. Specifically, the ACEs quiz asks the following questions:

Prior to your 18th birthday: 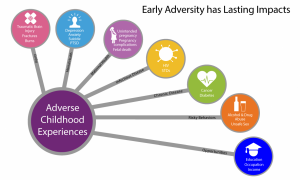 Figure 1. Early Adversity Has Lasting Impacts – Diagram courtesy of the Center for Disease Control and Prevention. (2019). Violence Prevention: About ACEs. Retrieved from

Specific to sex trafficking, ACEs have been linked to risky behaviors that include alcohol and other drugs as well as unsafe sex. As previously stated in this text, human traffickers use drugs to lure in potential trafficking victims with an already established substance use disorder. They also use drugs to entice or lure in an inexperienced victim to get her “hooked” on drugs. Once dependent on drugs, drugs are often used as a reward (for compliance) as well as a punishment for non-compliance for trafficked women. In the case of non-drug using victims, the trafficker sometimes forces the consumption of addictive substances because it will guarantee the trafficker that: 1) the victim will become dependent; 2) drug dependencies will make the victim incur debt to the trafficker; 3) the trafficker will be able to control the victim through drug use; and 4) the victim may become unduly influenced to stay in a trafficked situation due to trauma bonding (and drug dependence) despite how bad the trafficking experience may be (Bernat & Winkfeller, 2010; Kara, 2009; Meshelemiah, Gilson & Prasanga, 2018; Williamson, Dutch & Clawson, 2007). Drug use also ensures more cooperation on the victim’s part. In the case of sex trafficked persons, ACEs and substance use disorders appear to interact with one another.

Categorically, Adverse Childhood Experiences have also been linked to the following classes of physical disorders along with mental disorders. According to Lederer and Wetzel (2014), these same types of disorders are commonly found among sex trafficking survivors.

In terms of identification of trafficked persons in healthcare settings, the following are red flags in a patient’s presentation when sex trafficked (Greenbaum, Dodd & McCracken, 2018; Orme & Ross-Sheriff, 2015).

According to the most current version of the Diagnostic and Statistical Manual, Fifth Edition (DSM-5) of Mental Disorders, trafficking victims are especially at high risk for developing Posttraumatic Stress Disorder (PTSD), which is a mental disorder (American Psychiatric Association [APA], 2013). Substance disorders are also found in this particular Manual. Commonly used drugs by sex trafficked persons include alcohol, crack cocaine, and heroin (and other opioids). The misuse of these highly addictive drugs tends to result in substance use disorders (Greenbaum, Dodd & McCracken, 2018; Orme & Ross-Sheriff, 2015). In addition to substance use disorders, the following classifications of mental disorders tend to present among trafficked persons as well (Greenbaum, Dodd & McCracken, 2018). They include:

Healthcare is a human right.

Victims are Not Invisible:  Know the Signs

The physical and mental disorders just discussed are common disorders that present among sex and labor trafficked persons in healthcare settings. In their study, Lederer and Wetzel (2014) found that 99.1% of their 106 trafficking survivors reported to a healthcare facility while a trafficking victim with at least one physical health problem. Other researchers have found similar findings. Greenbaum, Dodd and McCkracken (2018) reported that 108 minors reported to two metropolitan pediatric emergency departments and one child protection clinic in their study. This indicates that trafficked adults and children are not always hidden or invisible. Trafficked children and adults have sought treatment from emergency rooms, free clinics, child protection clinics, pediatric emergency departments, hospitals, private physicians, and clinical treatment facilities (Greenbaum, Dodd & McCkracken, 2018; Schwarz, Unruh, Cronin, Evans-Simpson, Britton & Ramaswamy, 2016). Given this reality, it is critical that healthcare practitioners are better prepared to identify victims when they seek healthcare.

According to the Texas Human Trafficking Prevention Task Force (2014), signs of a school-aged child being trafficked includes academic, behavioral, physical, emotional, and social indicators as shown below. 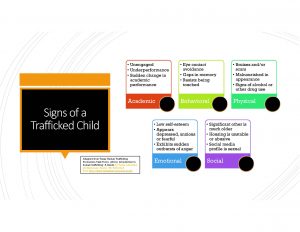 According to Polaris (2019), signs of labor and sex trafficking include work-related conditions, mental health/behavioral flags, physical health flags, lack of control, and other indicators as shown below.

In an effort to screen child sex trafficking in the healthcare setting, a group of researchers developed a Brief Screening Tool (Greenbaum, Dodd, & McCkracken, 2018). The following questions compose the tool:

Greenbaum, Dodd and McCkracken (2018) found that answering “yes” to just two of these questions properly identified child sex trafficked victims with a sensitivity of 92%, specificity of 73%, positive predictive value (PPV) of 51%, and a non-positive predictive value of 97%. These percentages mean that this is a useful tool for early screening of child sex trafficking in a healthcare setting.

Detecting red flags for children and adults is an important first step in providing services to trafficked persons in healthcare settings. Despite the healthcare model used in the United States and many other countries around the world, access to healthcare is a human right—not a privilege.

Despite the care and attentiveness of the most well-meaning healthcare practitioner, the individual may not be successful at getting trafficked persons to open up in some instances. According to researchers (Baldwin, Eisenman, Sayles, Ryan & Chuang, 2011; Greenbaum, Dodd, & McCkracken, 2018; Orme & Ross-Sheriff, 2015), there are a host of barriers to disclosure of trafficking victimization. They include:

In the event that the healthcare practitioner is able to get the trafficked person to open up, it is important to adhere to a trauma-informed protocol to avoid re-traumatizing the victim. All practitioners seeking to screen, identify, and assist trafficked persons should seek professional development training on trauma informed care. Trauma-informed care is one that recognizes the impact of trauma on one’s mental health, physical health, social capacity, and brain development (Enrile & De Castro, 2019). Key principles include awareness, safety, trustworthiness, choice, and collaboration. 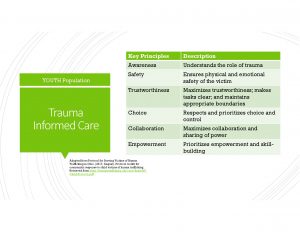 The above table is specified for youth, but is appropriate for adults as well. According to Enrile and De Castro (2018), evidence-based and evidence-informed practices for trauma-informed care points to 1) safety and acceptance; 2) adaptation over disease; 3) collaboration and peer support; and 4) empowerment/choice of self-identification; and 5) context and cultural sensitivity. These concepts overlap with the trauma informed youth approach to service delivery. 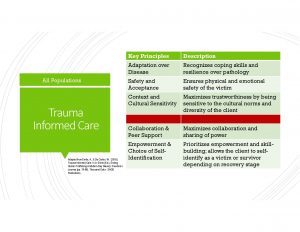 Healthcare practitioners must advocate for hospital level policies that incorporate a protocol for suspected cases of sex and labor trafficking. The framework must be multidisciplinary in nature and include the following practitioners when possible:

As seen in the diagram below, there are proper steps to take that include knowing red flags, discussing them with the patient, calling the National Human Trafficking Resource Center if indicators are present, assessing the level of potential danger, and then deciding if law enforcement involvement is needed or a referral to local resources. Regardless of one’s discipline, Baldwin et al. (2011) recommends that all practitioners in healthcare settings use good common sense, notice visual cues, observe patients’ body language and interact with patients in a sensitive manner. Being indifferent and too busy are not acceptable alternatives. 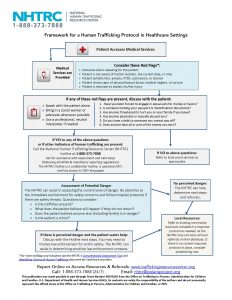 Now, let’s shift gears and turn to a case study.

“Maxi” is a young African American female who was sex trafficked for over 10 years. She participated in a research project in 2019 conducted by the authors. This is a description of a medical emergency of hers.

Despite bleeding through her jeans due to a miscarriage that turned into hemorrhaging, Maxi continued to smoke crack and “turn tricks” for two hours before she passed out and nearly died due to blood loss. Several male customers asked for and paid for a “blow job” while Maxi knelt down with blood soaked jeans on.  One even wanted vaginal sex with her despite her heavy bleeding, but she refused.  It was not until another sex trafficked woman who had been smoking crack cocaine with Maxi earlier in a “trap house” began to insult her for being so “trifling” for not going to see a doctor after clearly miscarrying her fetus, that Maxi finally decided to seek medical care.

The woman warned her that she was going to bleed to death if she did not seek medical attention right away.  It was at that point that Maxi decided to seek out a police officer for help.  As she approached the law enforcement officer’s vehicle, she passed out from blood loss.

Maxi reports that not one healthcare provider screened her for sex trafficking while hospitalized after her miscarriage. Instead, she reports, that they concluded that she was a “junkie” who needed substance use treatment and later discharged her. Despite this horrific loss, Maxi continued to use drugs for many years after this miscarriage and near death experience. Her pimp trafficked her for many years as well. 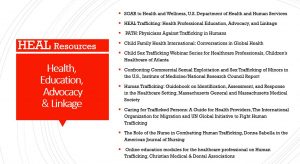 Lederer, L.J., & Wetzel, C.A. (2014). The health consequences of sex trafficking and their implications for identifying victims in healthcare facilities. Annals of Health Law, 23, 61-90.

Meshelemiah, J.C.A., Gilson, C., & Prasanga, A.P.A. (2018). Use of drug dependency to entrap and control victims of human trafficking: A call for a US federal human rights response. Dignity: A Journal on Sexual Exploitation and Violence, 3(3), Article 8.

of the TVPA. Washington, DC: NASW.

National Human Trafficking Resource Center. 2019). (Identifying victims of human trafficking: What to look for in a healthcare setting. Retrieved from https://humantraffickinghotline.org/sites/default/files/What%20to%20Look%20for%20during%20a%20Medical%20Exam%20-%20FINAL%20-%202-16-16.pdf

Roudometkina, A. & Wakeford, K. (15 June 2018). National Women’s Association of Canada. Trafficking of Indigenous Women and Girls in Canada: Submission to the Standing Committee on Justice and Human Rights. Retrieved from https://www.ourcommons.ca/Content/Committee/421/JUST/Brief/BR10002955/br-external/NativeWomensAssociationOfCanada-e.pdf