The use of children in warfare is against international legislation that protects the rights of children. Yet it still remains a persistent issue in conflict-torn areas of the world. Children are used in direct combat, support roles like cooks and messengers, and as suicide bombers, to name a few duties—as child soldiers. International social work can take on roles in protecting these children and combatting their recruitment and abuse.

By the end of this chapter, the student will be able to:

Child Soldier: A person under the age of 18 recruited either voluntarily or by force to participate in an armed forces group in any capacity

A child soldier or a child associated with an armed force group, according to the Paris Principles in 2007, is any person, 18 years of age or younger, who is or has been recruited or used by an armed group in any capacity (United Nations International Children’s Emergency Fund (UNICEF), 2007). The role of children in armed forces conflict is often direct combat, but they also act as spies, cooks, messengers, porters, and sex slaves among other roles (Child Soldiers International, 2016a; Bleasdale, 2013; United Nations, n.d.; UNICEF, 2007). The number of children involved in armed conflicts has risen 159% since 2012, with almost 30,000 verified cases of recruitment in 17 countries around the globe (Child Soldiers International, 2019). 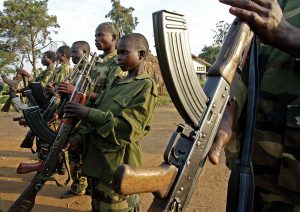 Children are recruited for armed forces conflicts because they are often easier to manipulate and more obedient than adults, do not have a developed sense of danger, and do not require many resources to maintain (Child Soldiers International, 2016a; Dudenhoefer, 2016; Their World, 2016). Some children are forcibly recruited by being born into militant groups or by their families and communities being overcome by militant groups (Dudenhoefer, 2016; Their World, 2016). Children who are forced are often abducted, coerced, or abused into submission and participation (Dudenhoefer, 2016; Singer, 2005; Their World, 2016). Other children “voluntarily” join. Reasons children choose to join militant groups may be: their families identify with a side of the conflict and they feel they are honoring their families and their countries by choosing to fight; a survival tactic where militant groups promise safety and a sense of family; they are promised some type of pay off; or they have a sense of vengeance for lived inequalities that they feel war can correct (Dudenhoefer, 2016; Singer, 2005; Their World, 2016). Children who voluntarily join militant groups often do not have a full understanding of the consequences of joining, or of the severity and danger of their tasks, which is also a reason they are recruited, as highlighted above. Therefore, though they may not have needed to be forced into submission, aside from not being adults able to consent, their choice in participation is not fully-informed and therefore not really voluntary.

As previously mentioned, child soldiers can take on a number of roles in armed conflicts and are recruited as young as the age of 8 (Bleasdale, 2013; Singer, 2005; United Nations, n.d.). Many of them will be used in direct combat, as early as the age of 10, because modern assault rifles are easily managed by small children making child soldiers as useful and deadly in combat as adult soldiers (Dudenhoefer, 2016). Besides combat, common roles for child soldiers are patrolling and surveillance, scouting or spying, and prisoner guard (Singer, 2005). These traditional soldier roles are often taken on by boys more often than girls. Not surprisingly, given what we know about human and sex trafficking worldwide, girls who are recruited into armed conflict are more often used as sex slaves (United Nations, 2013; United Nations, n.d.). The involvement of girls in armed conflict more than quadrupled between 2017 and 2018, growing from 216 to 893 reported cases (Child Soldiers International, 2019). Former child soldiers who had been rescued reported having to commit horrific acts, such as killing their own parents, as a form of initiation and showing allegiance; others have reported having to participate in killing war captives, or hurting other child soldiers (Klasen, Reissmann, Voss, & Okello, 2015; Their World, 2016; Thomason, 2016). Child soldiers who survive war are left traumatized, vulnerable to re-recruitment, and sometimes re-victimized by being detained and punished for involvement in war crimes (Klasen, et al., 2015; United Nations, 2018). 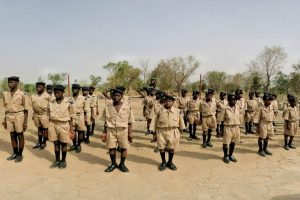 Child Soldiers of the World

The United Nations’ Secretary-General releases an annual report on children in armed conflict, which includes a “Name and Shame” list of the countries participating in child soldier recruitment. The 2017 report highlighted violations by 19 countries—stating there were over 6,000 violations by government forces and over 15,000 by non-state armed force organizations worldwide (United Nations, 2018).

The main factor that makes legislation effective is the consequences of violation. These documents, however, are declarations, proclamations, conventions, and statements of best practices. Therefore, only countries who are members of the United Nations, sign the optional protocol, and subscribe to the ideas and articles presented in the other documents are expected to abide by them. Within that, each governing body is assigned the responsibility of ensuring their enactment and establishing consequences of violations. This is also an issue with the United Nations Universal Declaration of Human Rights, as there is no clear authority given to the United Nations or any other member state to interfere or persecute violations (Dolinger, 2016). While countries may be highlighted by human rights watch organizations, “shamed” by the UN secretary general, or other countries may refuse to engage in trade with them, there are rarely any concrete and legal consequences unless initiated and handed out by the governing state. Some countries, like the United States, have passed legislation like the 2007 and 2017 Child Soldiers Prevention Acts, in which providing U.S. military assistance to countries actively using child soldiers is prohibited except in cases where a president of the United States waives the prohibition for national security reasons. Unfortunately, as of 2016, the president had issued a waiver in 26 of 33 cases where the Child Soldiers Prevention Act would have been utilized (Human Rights Watch, 2016).

Ending the Use of Child Soldiers

The United Nations highlights the need to continue to engage and collaborate with countries worldwide to expand legislation and support efforts to end child engagement in warfare (United Nations, 2018). Preventing recruitment is also an important element through not only within-borders legislation, but across-borders legislation to prevent children from crossing borders for engagement with warfare. Similarly, it is important to interrupt the cycles that allow recruitment of child soldiers–educational inequality/lack of access to education, poverty, and political instability. Post-war, child soldiers experience physical injuries and disabilities, loss of family and homelessness, long-term memories of trauma and war, guilt or shame, stigma and rejection, and social marginalization (Denov, 2010). Therefore, ending the re-victimization or re-recruitment of these children by detaining and punishing them post-war engagement for their affiliations with militant groups is an imperative step toward re-integration and healing of children who have been used as child soldiers. They need restorative, therapeutic efforts to be made toward their resocialization.

All of this in mind bears the question of what social workers, other practitioners and policymakers can do to eliminate the use of child soldiers. A lot of these efforts begin with policy work–international and national policy, local policy, and ensuring divestment from intentional and unintentional support of countries using child soldiers. The trauma and horrors of war that the children have witnessed has to be addressed for successful reintegration, which lends itself to the crux of social work–mental healthcare, interpersonal relationship building, trauma care, and addressing stable family and housing needs. Assistance with accessing education and breaking cycles of poverty is also imperative to prevent child recruitment into warfare. Child Soldiers International, War Child, and UNICEF are all organizations working toward addressing trauma and reintegrating children into safe communities post-war engagement (Borgen Project, 2017).

Now, let’s shift gears and turn to a case study.

Ateef is a 12-year old boy from South Sudan whose family has always lived outside of Yambio. His father and two older brothers have been soldiers in a rebel military group for as long as he can remember. Wanting to emulate the leadership and protective characteristics of the other men in his family, Ateef voluntarily begins training as a child soldier. He begins engagement with the army by being a messenger between stationed groups, and soon begins training on use of weapons. By the age of 13, Ateef has been trained in the use of assault rifles and is a frontlines combat fighter. He fights for two years before the United Nations and South Sudan’s People Defence Force negotiate for the release of hundreds of children from the armed forces. Ateef is now 15 years old, struggles with nightmares about the wars he participated in, and faces stigma from the community he has been placed in. He has been assigned a case worker who helps him with his school work and has enrolled him in a program for him to learn tradesmen skills, but he often wonders what has become of his father and brothers still involved in the army, and if he will ever be reunited with them.

A Long Way Gone: Memoirs of a Boy Soldier by Ishmael Beah

Child Soldier: When Boys and Girls are Used in War by Michel Chikwanine & Jessica Humphrey

Dolinger, J. (2016). The failure of the Universal Declaration of Human Rights. University of Miami Inter-American Law Review, 47(2). Retrieved from https://repository.law.miami.edu/umialr/vol47/iss2/4/

Dudenhoefer, A. (2016). Understanding the Recruitment of Child Soldiers in Africa. African Centre for the Constructive Resolution of Disputes (ACCORD). Retrieved from https://www.accord.org.za/conflict-trends/understanding-recruitment-child-soldiers-africa/

Their World. (2016). Explainer: Child Soldiers. Their World: A Brighter Future for Every Child. Retrieved from https://theirworld.org/explainers/child-soldiers

United Nations. (n.d.). Child Recruitment and Use. Office of the Special Representative of the Secretary-General for Children and Armed Conflict. Retrieved from https://childrenandarmedconflict.un.org/six-grave-violations/child-soldiers/

United Nations. (1959). Declaration of the Rights of the Child. Retrieved from http://hrlibrary.umn.edu/instree/k1drc.htm

United Nations. (1989). Convention of the Rights of the Child. Retrieved from https://www.ohchr.org/en/professionalinterest/pages/crc.aspx

United Nations. (2002). Optional Protocol to the Convention on the Rights of the Child on the involvement of children in armed conflict. Office of the Special Representative of the Secretary-General for Children and Armed Conflict. Retrieved from https://childrenandarmedconflict.un.org/tools-for-action/optional-protocol/

United Nations. (2013). The Six Grave Violations Against Children During Armed Conflict: The Legal Foundation. Office of the Special Representative of the Secretary-General for Children and Armed Conflict. Retrieved from https://childrenandarmedconflict.un.org/publications/WorkingPaper-1_SixGraveViolationsLegalFoundation.pdf