How Queen Changed My Career Trajectory

While living in Buffalo, I met a woman in 1996 who I will call, “Queen”.  She was a 26-year-old African American female who had been forced into prostitution for 10 years prior to our meeting. Although I met her when she was 26, her story, however, goes back to when she was 16.  Back then, minors like Queen were called child prostitutes.  They were viewed as promiscuous girls, incorrigible youth, and kids who were “too grown for their own good”.  Well, Queen was not any of those things.  She was a child who met a man in his 20s, fell in love for the first time and was manipulated into believing whatever he said.  When Queen met and started to date “Marcus”, he gave her everything that she was not getting at home—security, attention, material things, a clean place to live, peace, good food and more importantly—love.  She fell hard and fast for Marcus. Their first few months together were a honeymoon.  Marcus was the best “boyfriend” that Queen could have hoped for.  She could not believe her good fortune.  Her life was now going to be better.  And it was—for a while. Then Marcus slowly started to criticize her, then he verbally abused her and then he progressed to the point of physically abusing her.  Queen was lost, confused and madly in love with Marcus.  Her world did not make sense.  Her home life made even less sense—returning there was not an option. So she stayed, hoping and praying that the old Marcus would surface again.  Little did she know or understand that the emotional and physical abuse that she was enduring was about to be compounded with sexual violence.  Marcus violently raped her to let her know that she had better not “try” him. Then he started to “loan” her out to his relatives and friends.  He convinced her that, if she really loved him, she would “do this” for their family. After all, she had to “contribute” to the family, too—as he put it. The sexual violence progressed quickly over a short period of time—she was later instructed to entertain his “boys” in groups at a time.  Now, she was a victim of gang rape.  Queen became depressed and hopeless after a short period of time.

As I sat in the audience as Queen told her story, I could feel my blood pressure rising. I was furious. I was outraged and I wanted to give Marcus a piece of mind.  No…wait, I wanted him in prison for life.  But, wait, Queen was not done. She was not done telling her story.  By this time, she is crying while facing the audience. She was prompted to stop telling her story if doing so was re-traumatizing to her.  She insisted on continuing as she turned her body to the side.  The audience now sees her profile on stage.  She starts to gently bounce in a slow motion like she is shaking away the pain or something.  She is crying uncontrollably but yet she is not done telling her story.  I could feel the tears welling up in my eyes out of sheer compassion for her suffering.  She then tells the group how Marcus broke her spirit.  She goes on to tell us how Marcus decided to take his level of sexual violence to another level—a level that none of us in the room had ever heard of.  She told us that Marcus and his boys had started to film her having sex—but not sex with them because that would incriminate them in a court of law if the footage ever got leaked.  Instead, Marcus started to film Queen having sex with… DOGS!

When Queen said the word, “DOGS”, everyone started to look around with confused faces and asked in a whisper-like voice, “Did she just say dogs?” We all thought she said dogs, but we could not believe that she had just said “dogs”.

“Let that sink in for a moment…a teenage girl was having sex with dogs in Buffalo, New York, in the United States of America!” 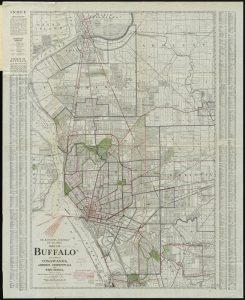 “The Matthews-Northrup up-to-date map of Buffalo and Towns of Tonawanda, Amherst, Cheektowaga and West Seneca” by Norman B. Leventhal Map Center at the BPL is licensed under CC BY 2.0

Queen did not tell the group how long this went on, but she vividly described smelling the dog’s breath as he excitedly penetrated her, and how his nails would claw into her body as he steadied his footing during the thrusting. Keep in mind, dogs enter into other dogs from the back in a humping fashion.  The dogs that were used to violate Queen were groomed to have sex with women in a frontal opening fashion so that she could see the animal violating her.  This was a particularly vile method used by Marcus to break down Queen.  She finishes her talk—still crying—with a comment to the effect, “I was a prostitute for 10 years before I was rescued”.

I remember yelling to myself, “That is not prostitution.  I don’t know what that is called, but that is NOT prostitution!” More importantly, I decided that day that I would commit my professional career to understanding “prostitution” and the element of “seasoning” victims, because I was certain of two things: 1) that Queen was not the only one being forced to have sex with dogs by their “boyfriends” during the “seasoning ” stage, and 2) that what Queen had just described was not prostitution.

Unfortunately, years ahead, I was proven correct on both points. As for a name to capture the essence of what Queen lived through, two landmark pieces of legislation were enacted in 2000—which was four years after I had met Queen.  They were 1) the United Nations Protocol to Prevent, Suppress and Punish Trafficking in Persons, Especially Women and Children, Supplementing the United Nations Convention Against Transnational Organized Crime and 2) the Victims of Trafficking and Violence Protection Act. According to these pieces of critical legislation, Queen would not have been a child prostitute or an adult prostitute.  She would have been identified as a trafficking victim had her victimization taken place during another time period.

The United Nations (UN) document is often referred to as the “Protocol”.  This international protocol defined human trafficking for the first time.  Article 3 of the said Protocol reads as follows:

a) Trafficking in persons shall mean the recruitment, transportation, transfer, harbouring or receipt of persons, by means of the threat or use of force or other forms of coercion, of abduction, of fraud, of deception, of the abuse of power or of a position of vulnerability or of the giving or of receiving of payments or benefits to achieve the consent of a person having control over another person, for the purpose of exploitation. Exploitation shall include, at a minimum, the exploitation of the prostitution of others or other forms of sexual exploitation, forced labour services, slavery or practices similar to slavery, servitude or the removal of organs;

c) The recruitment, transportation, transfer, harbouring or receipt of a child for the purpose of exploitation shall be considered ‘trafficking in persons’ even if this does not involve any of the means set forth in sub paragraph (a) of the article;

d) ‘Child’ shall mean any person under eighteen years of age.

The United States also released its first iterative of the Victims of Trafficking and Violence Protection Act in 2000. It has been reauthorized five times since then. This Act is best known for its section on trafficking, which is known as the Trafficking Victims Protection Act (TVPA). According to the TVPA, Severe Human Trafficking activities are primarily categorized as Sex trafficking or Labor trafficking.  Sex trafficking involves the elements: force, fraud or coercion. These means are used to induce others into commercial sex activities.  Force, fraud or coercion are not necessary elements for those less than 18 years of age given their minor status. Labor trafficking, through the use of force, fraud and coercion, involves making a person provide labor services for free; for far less than what was agreed upon; or under terms that were not agreed upon prior to employment (Okech, Morreau, & Benson, 2011; Meshelemiah, In Press; Pub. L. 106-386).

Although I could not have known at that time that these pieces of legislation were in the making, I knew that someone needed to figure out a better term to describe Queen’s ordeal. Prostitution was by far—inadequate to say the least.

As for my other point on there being others like Queen who had been subjected to having sex with dogs, it is true.  Queen is not the only one—unfortunately.  I have since met other survivors while serving on panels discussing human trafficking.  No one has ever publicly disclosed this type of sexual violence to me since Queen, but women have come to me privately and thanked me for telling the audience about Queen because they too were subjected to the same thing as she.  As one survivor stated, “I couldn’t believe it when I heard her story.  I thought I was the only one. I had planned to go to my grave with my story because of the shame I still feel about having sex with dogs.”

Fast forward to 20+ years later, I am still committed to understanding “forced” prostitution (a.k.a. sex trafficking) to this day.  Little did I know that when I co-developed surveys to be used with men who buy sex (Johns), community residents, and women labeled as prostitutes in 1996 in Buffalo, New York, that meeting Queen in my preparation for such research would change my life.  At the time, I thought I was simply going to develop some meaningful surveys, administer them to three diverse populations and get to know a few people along the way. Never did I imagine that I would spend the next two decades (and counting) shedding light on human trafficking.  Queen changed my life and set the stage for my entire career.  As for Queen, I never saw her again after that day, but I have met other sex trafficked women just like her. It is because of Queen and all of them that I do this work.