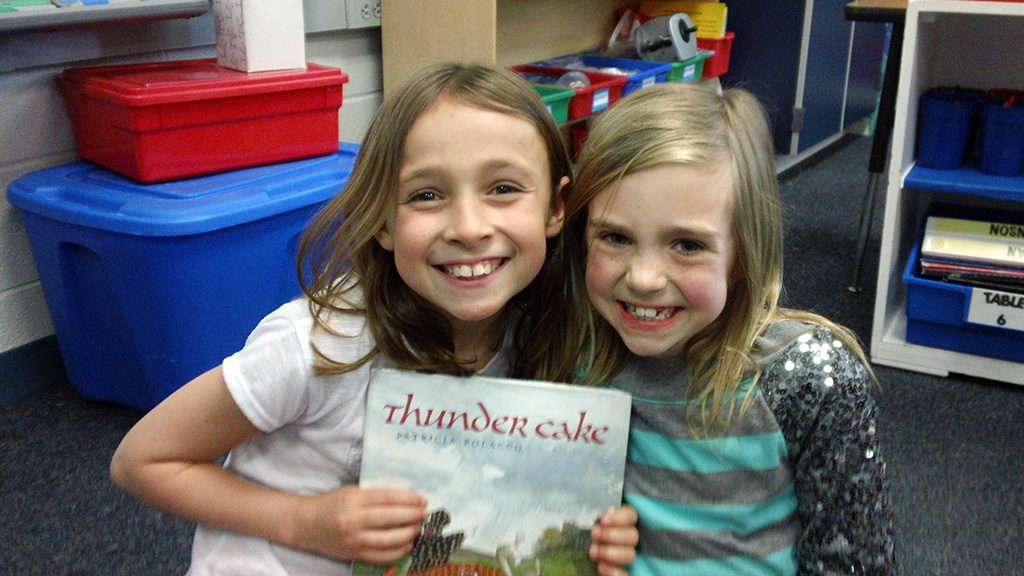 After about six weeks spent in reading quality nonfiction books and discussing both the content and the characteristics of the genre, it was time for students to write their own nonfiction books on weather-related topics such as rain, snow, thunderstorms, and tornadoes. Mrs. Kona began the writing project by introducing the students to some carefully selected fiction picturebooks that told a story based on a weather-related topic. She placed the students in pairs and had them select a fiction book that interested them. They read the book, asked themselves questions while reading, and then wrote questions they had based on the weather event described in the book. For example, when Mikey and Joey read Groundhog Weather School they wondered what human meteorologists did (in comparison to their rodent counterparts in the story) and what tools they used in determining the weather. Reading Boom! Boom! caused Louise and Jillian to wonder about the seasons depicted in the story; one of the questions they asked was, “Why do the seasons change?”

As students finished developing their lists of questions, Mrs. Kona told them: “Your book should include both writing and drawing. Your book should be like the nonfiction books we read that have print and pictures.” She encouraged students to think about elements of the nonfiction books they had been reading including the ways in which they were organized, the text features they used, and their considerateness. She challenged students to ask themselves, “How am I going to create a nonfiction text that teaches someone about these things?”, and to think about what excited them about the topic and include that in their books. Mrs. Kona remarked that she tried to position her students as both researchers of and authors of nonfiction.

The teacher challenged her students to think about what excited them about their topic and include that in their books.

After completing their research, students, in the role of authors, used writing, illustrations, drawings, and other text features to communicate the information they had discovered. Using their understanding of the characteristics of nonfiction, students thought critically about how they were going to convey and display their information. Hazel and Zoe took up Mrs. Kona’s lessons about nonfiction text features and how they conveyed information to readers.  I observed them one day studying a diagram of the atmosphere during a thunderstorm. Hazel pointed to the diagram and said, “Look! This diagram is telling us how thunderstorms are formed. We can use this information in our own book.” While she was commenting, Zoe quickly took notes and found a way to rewrite that information into their own book. Writing the information in their own words, “as authors do,” Zoe said, the girls elected to place the information in a Fact Box. When I asked them about the Fact Box they both said it would be an easy and quick way for the reader to see and get the information they were trying to tell. Using their constructed knowledge of nonfiction and nonfiction texts, the girls adopted both the author and researcher stance to read, think critically, create connections, and use nonfiction information in their own writing.

During the next several days, students worked on their books using  a multi-step writing process format that included drafting, sloppy copies, second drafts, and multiple stages of edits. Zoe and Hazel worked hard, furiously even, during this time to create a book just like the ones they had spent months reading and studying. By the end of the time Hazel and Zoe and the other students in the class had produced nonfiction books with covers, title pages, table of contents, indexes, glossaries, captions, illustrations, fact boxes, headings, bold words, quizzes, experiments, and even “About the Author” pages.

Hazel in speaking about her completed book, told me that she had worked hard to make sure her information was easy to understand so everyone – including Kindergartners and 5th grade boys – could enjoy it. She had put in bold-face print vocabulary like meteorologist, electricity, and temperature so readers would know the key terms. She included a diagram of the water cycle complete with arrows and labels on the page describing why rain happens. Colorful illustrations accompanied paragraphs explaining what happens to the atmosphere just before a storm. The book included a Table of Contents to “help readers get to what they want to read”, a glossary, and an index. The use of these text features helped present  the information in an organized and considerate manner. Throughout this project students were not given step-by-step instruction; rather they were provided with opportunities to act like authors of nonfiction based on their own understandings of what nonfiction is and what it is used for. Further, students were able to do this because they were knowledgeable and knew their topic, just like authors of published nonfiction books.

Pages from a Completed Nonfiction Book