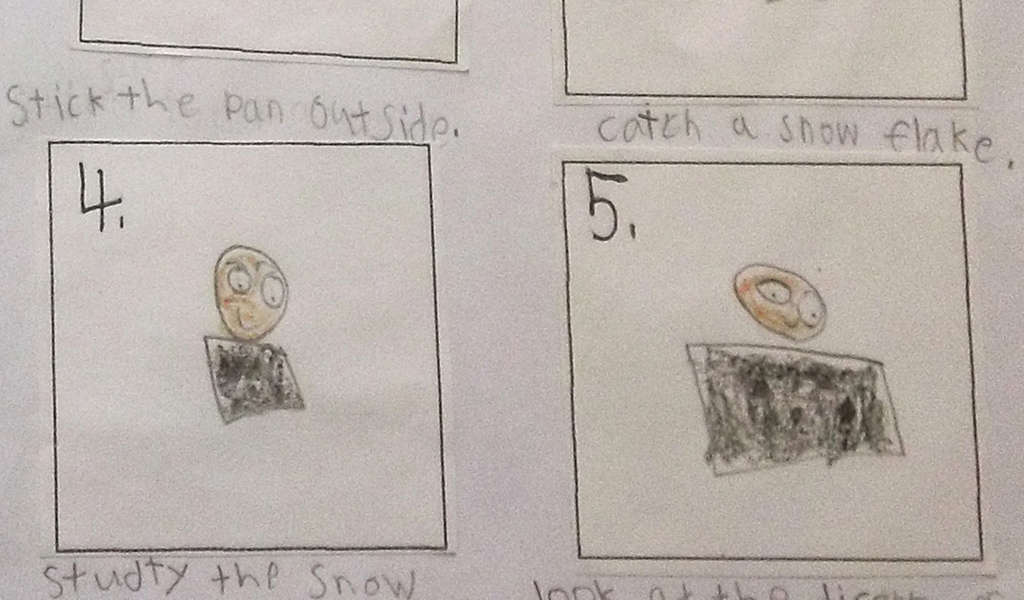 Throughout the unit Mrs. Kona and the students engaged in many conversations. Typically these conversations centered on nonfiction as a literary genre and/or understanding the content being communicated in the books. Initially Mrs. Kona spent a lot of time helping students understand that nonfiction contains factual information about the world in which nothing is made up. This caused some confusion, however, as students encountered books that contained real information but was delivered via flying school buses and talking animals. A well-known example is the Magic School bus series, which provides factual information on a wide variety of science topics through the use of fantasy. Flying school buses with the capabilities of shrinking and riding through a person’s bloodstream to teach about the circulatory system may excite, but can also confuse, younger readers trying to discern the differences between nonfiction and fiction.

Thus, at the beginning many of the conversations around nonfiction books were based on understanding what was fiction and what was nonfiction. For instance, after reading two books on Martin Luther King, Jr. Mrs. Kona initiated a whole class conversation about the books. Students quickly identified the first book, Martin Luther King, Jr., as nonfiction because of its combined use of illustrations and photographs, text features they recognize as indicative of nonfiction. The second book they read was Martin’s Big Words: The Life of Dr. Martin Luther King Jr. The mixed media illustrations and lyrical content confused the students; many immediately categorized the book as fiction. Mrs. Kona decided to use this as a teaching moment. Going through the book page by page, Mrs. Kona stopped on a few pages, and, emphasizing the content, asked the students if the events in this book matched the events in the other book, their own prior knowledge, and what they read in a previous piece about Martin Luther King, Jr. in Scholastic News. As they went through the book, they came to recognize that both books talked about the peaceful marches MLK led, related other events of the civil rights movement, and provided consistent wording of his speeches. Like detectives, students investigated the nature of the genre, coming to understand that the content is the most important criteria in determining whether a book is nonfiction or not.

However, students still confused fiction books with nonfiction books. For instance, Calvin told me he loved historical fiction books. He loved learning about history and told me about George Washington’s role in the Revolutionary War. He asked me if I knew about the Battle at Yorktown, and if I knew Washington fought in the French and Indian War. Calvin was engrossed in the information he was learning. When he showed me the books he had been reading on George Washington I noticed they were nonfiction books, yet he was labeling these books as “historical fiction.” When I asked him about their classification he said, “I don’t know why they call it fiction. They’re historical but not fiction.” With further discussion, Calvin told me that he classified them as historical fiction, minus the fiction, because the events were in the past. For Calvin, then, nonfiction seemed to be limited to books telling about current events and topics; anything that happened in the past was relegated to “historical fiction.” He was not alone in his struggle for clarity about what nonfiction was.

Likewise, Leo, after reading The Great White Man-Eating Shark told Mrs. Kona that the story was nonfiction “because it tells you, like, what to do if you are, like, nose-to-nose with a shark or if you see a dorsal fin when you’re in the water.” He was enthralled with the safety tips provided—“leave in a quiet and dignified way”—and even recognized the description of the shark, has having sharp teeth and a pointy head, as being realistic. Mrs. Kona later told me she knew she could not just tell him the book was nonfiction because, in a way, he was correct, there was true information provided in the story. Instead, she began by asking him about the subgenre of realistic fiction. He acknowledged that in realistic fiction books some of the situations could actually happen, but probably would not. They continued by talking about the content of the story. While Leo thought it was pretty awesome that someone could pretend to be a shark and scare people, he finally acquiesced, saying that it probably could not happen. Combined with his understanding that the characters were made up and knowing that the whole book was not true he finally came to the understanding that in a nonfiction version of this book “everything would have
had to actually happen.”

While Mrs. Kona dealt with students’ confusion surrounding fiction and nonfiction, she also helped students understand the informational content they were reading through conversations that were embedded throughout the day. These discussions helped students make connections between what they were reading and their own lived experiences. For example, when reading nonfiction books, Mrs. Kona never asked her students what I would consider the most common question teachers ask their students after reading a nonfiction text: What is the book about? Instead, she asked her students to make personal connections between the books and themselves. When reading Gusts and Gales: A Book about Wind, she wanted to know if the students had noticed or felt any wind when they were outside. Since it was February and the students had just missed a whole week of school due to snow and frigid temperatures, they had many personal experiences from which to draw. In particular several students noted that on days that it was colder, the wind blew faster; Mrs. Kona was able to find a section in the book that supported and extended their hypothesis.

Discussions helped students make connections between what they were reading and their own lived experiences.

The students also connected the information in this book with an earlier science experiment they had experienced when a science program came to their classroom. Referring back to the experiment about hot and cold air, they discussed how temperature affected the movement of wind. They used their hands to show the shifts in the wind depending on the incoming fronts of hot or cold air. Students used this prior knowledge to deepen their understanding of the information in the book. As the book moved on to address hurricanes, one student made a connection between that book and another book, Twisters, which discusses famous tornadoes and hurricanes. This kind of connection often occurred as students became more familiar with a topic after reading or hearing several books on the subject. All in all, it is interesting to note that these discussions were not just a simple regurgitation of information; rather Mrs. Kona and the students interacted with the information in the books, posing and answering questions as they read and talked together. As Penny Colman says, “Nonfiction is real life”; and Mrs. Kona’s students certainly were able to connect their own lived experiences with the information they were learning.