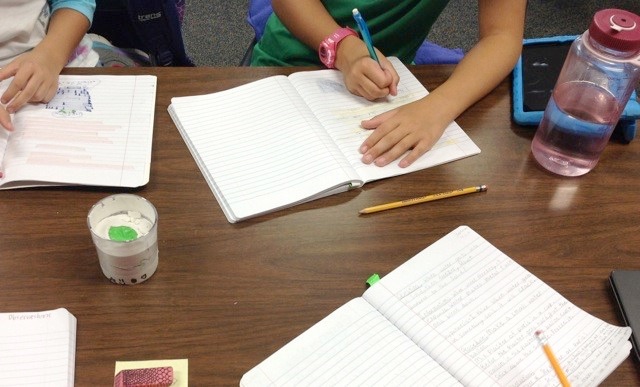 I encountered many similar concerns as students wrote research. Research work is difficult for students, and I work with students to develop the many skills they need to be successful researchers. As part of this teaching, we evaluate resources: are they trustworthy, reading appropriate, and helpful to the topic?  Students are fascinated to learn about entire websites devoted to false information (http://zapatopi.net/treeoctopus/ and http://allaboutexplorers.com), and many are hearing for the first time that a website might be biased toward a product or a viewpoint.  Students practice taking notes in their own words and talk to buddies about what they are learning to ensure they are learning. I read picturebooks to model engaging, informative text. We examine work to see what details help make it interesting (e.g., pictures with good captions, charts, surprising facts) and practice using those details in our own writing.

Their first research project, coinciding with these lessons, has specific related requirements.  Picking a topic of choice related to our current studies, they are required to complete a report, presentation, and an evaluation of one of their resources. The report must include a minimum number of nonfiction features, and at the end they are required to reflect on the information and create something new: maybe questions, maybe conclusions.

For this first research project which occurred during a classroom study of weather, one of my students, Charlie, chose to learn about tornadoes. One section of his research included a list of tips on “What to do if there is a tornado coming.” He had borrowed this idea from a lengthy article written for a knowledgeable audience. The article contained information that supported and clarified the included tips; further, the author of this article could reasonably assume the intended reader had the background knowledge needed to ensure that the information was helpful.

It was an interesting idea, but Charlie was writing for an audience, his classmates, who had minimal background knowledge. He had not considered his audience in this way, however, and so didn’t include sufficient detail in his writing. I had written something to this effect in the margin of his draft noting that some of his tips needed further explanation.  During conference time Charlie came to my chair intent on changing my mind, and I struggled to express to his satisfaction that, although he understood his meaning, his audience might not.  As we talked, a line of students needing my attention began to form beside Charlie.

Charlie was writing for an audience, his classmates, who had minimal background knowledge. He had not considered his audience in this way, however, and so didn’t include sufficient detail in his writing.

Aware of the other students who needed to conference with me, I worked even harder to convince Charlie that he needed to create a bridge between tips, the surrounding information, and the intended audience’s prior knowledge.

“Listen to this tip, Charlie,” I said. “You say that when you hear tornado sirens you should go to a safe place. Your reader won’t know where to go unless you describe a safe place.”

“Everyone knows that at school we go to the music room and at home we go to the basement,” Charlie retorted, “I told them that in my writing.”

Another voice chimed in. “My mom and I were at the grocery and heard sirens once.  I was scared because I thought we should go somewhere.” Julie, who was waiting in the line to talk to me next, had become interested in our conversation.

“Well, you can’t go outside, so I guess you just should have gotten away from the windows. A tornado will break the windows.”

Julie and Charlie started an animated conversation about other places they had been when sirens sounded and the possible safe locations for each: in a car, in a house with no basement, and walking home. Charlie was applying what he had learned through research to the situations they discussed.

“Julie, you sound really interested in what Charlie knows. Has he helped you understand his tip?” I gently asked.

“If he included what he just told you about safe places, who do you think would be glad to read his report?”

“Oh, man, I bet my friends would read it because sometimes we talk about safe places, when we have tornado drills.  My mom should read it, too, I think.”

Charlie puffed up a bit as Julie responded.  Julie had just told Charlie that his story was important and given him an audience.  She had also shown him, by asking him questions and posing scenarios he had not considered, that being clear and complete mattered. Charlie left to revise his list of tips.

Charlie was what we could call a “good” writer.  He used correct and varied sentence structure, monitored his spelling, and was learning to organize with paragraphs.  He had found several resources for his research topic, and although one was at a difficult reading level, he was able to use some of its information. He did paraphrase the sources in his writing and showed that he understood the content.  Overall, Charlie was applying a lot of the direct instruction on writing and researching that he had learned about in school. As we had struggled together, I thought I needed to show him, teach him, the nuanced connections between the writing and the audience.  However, comparing the audience of his mentor text to his own audience didn’t help him. Rather what worked for him was the personal connection with his audience as he came to understand their needs, and to feel his knowledge was valuable.  Then he knew what he needed to do as a nonfiction writer to communicate his message clearly and completely.