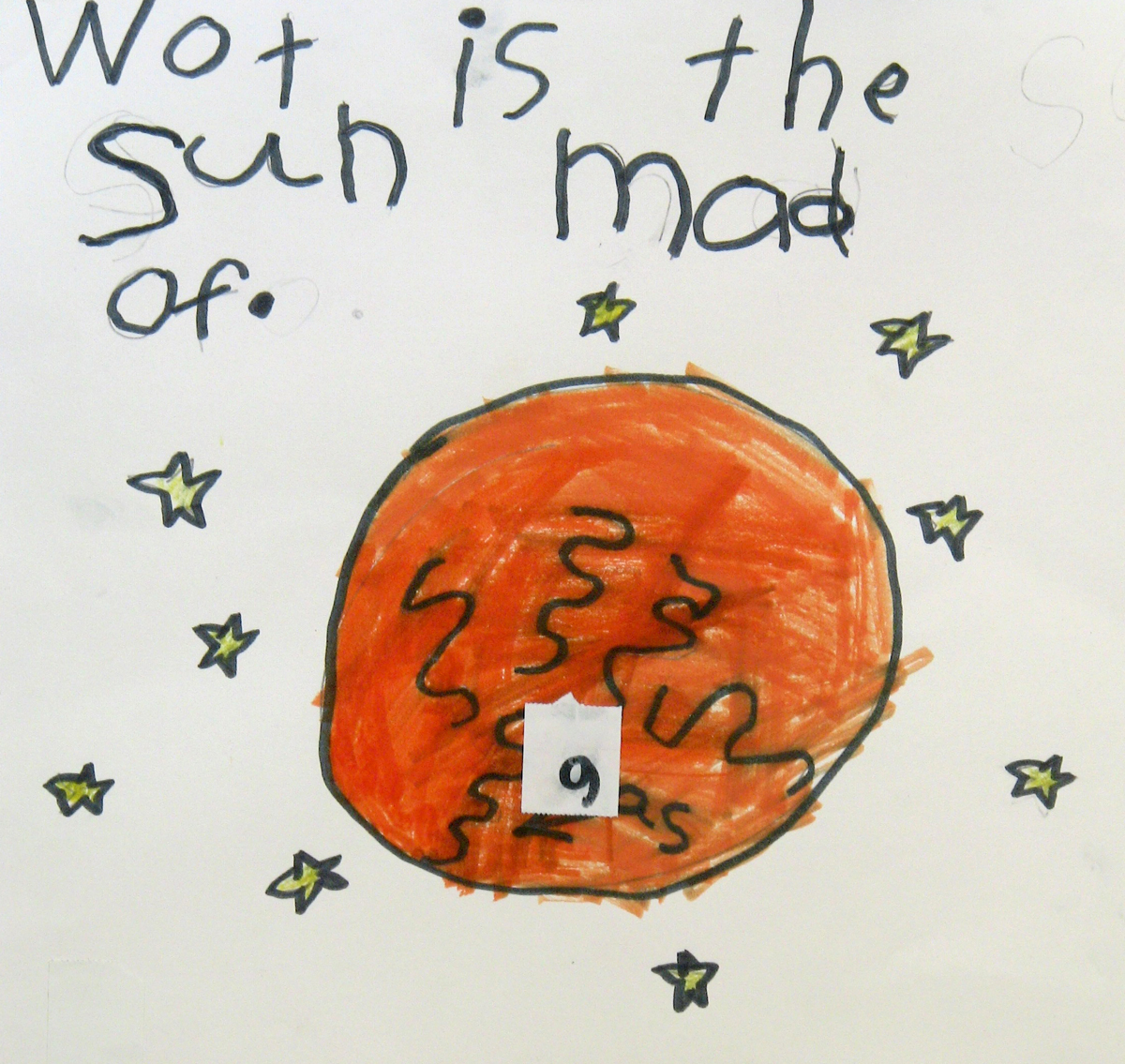 “What is the sun made of?” Olivia asked me.

As I considered this complex question being asked by a six-year-old first grader, I was wondering how I could help her. Glancing through the books she had lying on the table in front of her, I recognized that Olivia was going to have a very difficult time answering her question using just these books. Written at a first or second grade reading level, the text in these books referred to the sun providing heat and light to the earth but did not offer any details about the composition of the star itself.  Books that might fully answer her question were probably well beyond her reach as a reader; and, even if we had access to more complex materials, I wasn’t sure how successful I would be helping her comprehend what they were saying.

Deciding that I had to start somewhere, I picked up one of the books from her stack. Looking through it, I suggested that, since the sun provided heat and light, it must be burning hot.

Olivia took up this explanation with a further question, asking: “What is the hot on? It can’t be like a big furry thing of fire. That wouldn’t really stay.”

She continued speaking, shaping her hands like a ball: “So, is that [the book] saying it’s a big thing of floating fire or something?”

Once again I was at a loss. What was Olivia actually asking me? She seemed to have some concept of fire needing a source of energy in order to burn as well as an understanding that fuel sources get used up. Without clearly understanding what Olivia was asking, nevertheless I acknowledged that she had asked an important question, adding, “You’re right, it’s not just a bunch of sticks burning, is it? I guess we need to find out more.”

This was typical of the conversations that I often found myself having with the students in Mrs. Janey’s first grade classroom. Because students wondered about complex concepts and because the reading level of the nonfiction books available in the classroom varied widely, Mrs. Janey and I often found ourselves reading to students and talking with them about what they understood the text to mean and how this understanding might help them with their research. These interactions typically occurred in Writing Workshop both during individual writing conference time and during whole class mini-lessons, where Mrs. Janey’s interactive read aloud style encouraged students to wonder and imagine as they thought through possibilities for questions and answers.

As Olivia and I pondered her question that day, we both struggled with the source of the sun’s energy by referring to what we knew about fire as a source of heat. As that Writing Workshop ended, we had imagined some possible ways to answer Olivia’s question; but we both felt a sense of uncertainty and tentativeness about our understanding, and that left us with more questions.

Several days later, as I entered the classroom one afternoon, Olivia came up to me announcing: “The sun is made out of gas.”

“It’s made out of gas? You mean, like the kind of gas we put into our cars?” I asked.

“No,” she replied dismissively. “It’s like a big bomb that never stops blowing up.” Her words were accompanied by a roiling motion with her hands.

After a visit to the school library where she ended up in consultation with the librarian and materials from the Internet, Olivia had found further information to help her answer her question. This information helped her imagine a different possible answer—one that combined what she knew about how fire created heat along with a source that seemed more sustainable to her. Olivia was using her “scientific imagination” (Gallas, 2001) as she reasoned through and worked with making sense of the complex and sophisticated concept she was researching and writing about.

Gallas (2001), who does research in her own first grade classroom, uses the term “scientific imagination” to describe what she sees the young learners in her classroom doing as they engage in science. I see this term as suggestive of the way in which many children “play around” with the ideas and concepts of science and other content areas, looking at and interpreting these phenomena and events from their own perspective. Young children, who do not yet have the life experience or intellectual knowledge to deal with complex and nuanced scientific concepts, are imagining possibilities, hypothesizing approximations and proposing what might be true as they encounter scientific concepts.

Of course, many might argue that “scientific imagination” is really just a form of “scientific reasoning”. Yet I find myself uncomfortable with this term. It makes me think of scientists in white lab coats running experiments, studying streams of numbers, arguing theory. It strikes me as a very sophisticated activity that a certain type of adult person does, and has little relationship to what I see young children doing. But in Medawar’s work (1982) there is a definition of “scientific reasoning” that resonates with my experiences talking with first graders.  He views scientific reasoning as a dialogue between two voices:

Scientific reasoning is therefore at all levels an interaction between two episodes of thought – a dialogue between two voices, the one imaginative and the other critical; a dialogue …between the possible and the actual, between proposal and disposal, between what might be true and what is in fact the case (p. 46).

This definition meshes well with my notion of “scientific imagination” as well as my experience with the ways in which early childhood classrooms work. After 30 years teaching in elementary schools, I have come to regard the classroom as a culture where students and teachers act and react together, developing expectations for ways of acting, believing, valuing, feeling, thinking; and they do all of this through talk. Through instructional conversations with teachers and peer interactions children construct understanding and knowledge by engaging in the kinds of dialogues that Medawar describes.

The process that Olivia used to research and answer her question about the sun is typical of how students in Mrs. Janey’s classroom engaged in “scientific imagination (reasoning)” as they wrote nonfiction. They asked questions, and they read (or were read) nonfiction books; reading was accompanied by talking and writing about what they found out. Throughout this process the young students began to improvise, adapt, and transform their ideas and understandings about how the world, as they understood it, worked. Their conversations and writing reveal the ways in which they hypothesize and create ideas using textual knowledge and lived experiences to imagine what might be possible and what might be real.

In Olivia’s case her final answer only approximates the scientific explanation for what the sun is made of and how nuclear fusion powers it. However, throughout her process we can trace a dialogue between what she was able to imagine and her own critique of those imaginings. Reading that the sun was a source of heat made her imagine fire as the way in which the sun made heat; yet, she could not picture how that would work on the sun. Her initial imagined explanation did not fully meet her critical standards of where the fire was and how it was sustained. This critique of her own understanding led her to ask more questions and seek further information, eventually developing a hypothesis that answered her critical dialogue.