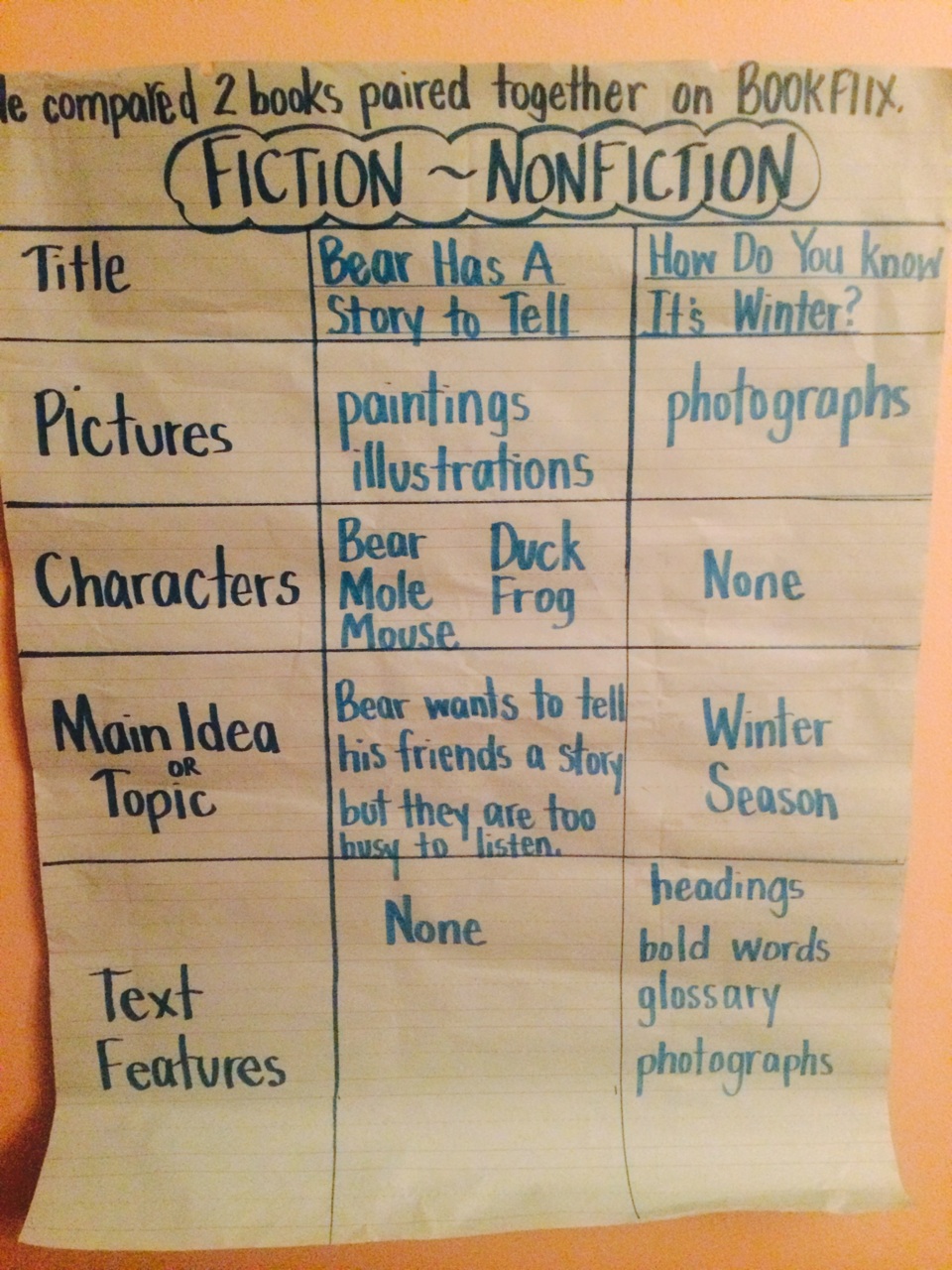 As I kicked off the study with my class, we weren’t without a few storms of our own as we worked to sort out the differences between fiction and nonfiction texts. Confusion rained down on us right from the beginning. Because of the way I planned to pair fiction and nonfiction books, my students understanding the distinction between the two was important. However, I quickly observed students’ confusion and misunderstandings. In response, I designed lessons that called upon the students to dig deep to discover the differences and similarities between the two genres.

It all started after a trip to the library to compare the characteristics of two paired books from the Book Flix website. Using a T chart I asked children to share the characteristics of each book (Bear Has a Story to Tell by Philip Stead and How Do You Know It’s Winter by Alan Fowler). When asked about characteristics of the nonfiction text, my students easily rattled off the text features they noticed: photographs, headings, bolded words, and glossary. They did the same for the fiction book: illustrations, characters, main idea. In a follow-up lesson, students compared two more paired books on the Book Flix site with much the same results.

In order to help my students gain a deeper and more accurate understanding of the difference between fiction and nonfiction texts, I planned a book dump.  I placed a small collection of books (5-7 titles) at each table and asked children to sort them, creating two piles—one for fiction and another for nonfiction. I intentionally included nonfiction texts filled with illustrations but few text features, nonfiction books with photography, and realistic fiction books. As individuals and groups shared their discoveries, I still observed some confusions, most of which stemmed from the comparison of illustrated nonfiction picture books and nonfiction books with examples of the text features the students had identified earlier. Many children placed the illustrated nonfiction texts in the realistic fiction pile. They did not view titles like Tomie dePaola’s The Cloud Book and Lynda DeWitt’s What Will the Weather Be as nonfiction books.

More support was needed.  To be honest, I was tempted to just tell them. Days were ticking by and my original unit timeline was slipping away. In spite of this, I knew it was necessary to their growing understanding of the genre and nonfiction books in particular, that they discover the answer themselves through some additional focused experiences. I decided there was value in letting my students grapple with this distinction.  I pointed them in the right direction by questioning their assumptions, offering models that did not fit their initial definitions, and supporting their efforts to sort out the inconsistencies.

The final lesson involved students comparing two nonfiction texts with the support of a graphic organizer (see Chart 3.1). Before sending students to work, I modeled how to work through the chart, searching for the information listed on the organizer. Student partners compared the books and recorded their discoveries.

The following are two examples of students’ charts for the books, Sunshine Makes the Seasons and The Cloud Book:

When we gathered back on the rug to share our findings, students sat with partners, graphic organizers and books piled on their laps. I directed their attention to the Smart Board as I asked for volunteers to share what they discovered.  With the electronic graphic organizer displayed on the screen, I typed in the words students read from their charts. With the completion of each, I drew students’ attention to the column marked content. Time after time, I posed the question, “Did the book include true facts and information? Is this a nonfiction book?” The answers were always a resounding, “Yes!”  As we compared the other columns, the proverbial light bulbs clicked on above their tousled heads. As they sat looking up at the screen and down at their graphic organizers, Sam piped up, “All nonfiction books have true facts and information but not always all the other stuff.” Heads were nodding across the meeting area. We reached an important Aha! moment. It was time to move ahead with our final project.