Generally, religious environmental statements are a good indicator of how religious communities are self-reflexively defining and expressing their values, but exactly how much impact these statements have on environmental concern will vary. [1] Given its widespread promotion and its relatively high level of authority, Laudato Si’ might be considered one of the more impactful religious environmental statements; as one indication of its impact, a Yale survey found that the encyclical influenced 35% of American Catholics and increased several specific measures of Catholic climate change concern by about 10%. [2] Similarly, Pope Francis’s visit to speak to the U.S. Congress in 2015 was credited with motivating eleven Republican congressmen (most of whom were Catholic) to dissent from their party’s stance on climate change and declare that they believed climate change is a serious issue. [3]

Regardless of how much causal influence these statements might have in any given time or within any particular denomination in triggering environmental behaviors or values, these statements highlight and reinforce many of the basic tenets of eco-theology. For instance, a summary of the basic tenets of several biblically-based climate statements shows a number of common and unsurprising themes. Some statements, particularly those developed by evangelicals (whose politically conservative brothers and sisters tend to be more skeptical of climate science), immediately emphasize that climate change is real and is causing harm; they further reinforce basic notions of stewardship (Christians are called to take good care of creation) and environmental justice (Christians are called to help the poor and vulnerable, who happen to be affected disproportionately by climate change), and highlight resonant themes like love of neighbor, hope, prayer, and taking action to change our behaviors so as to reduce climate impacts. Catholic statements have also emphasized stewardship and justice, as well as appeals to the common good and to prudence (i.e., it is prudent to act to resolve climate change given the risks it poses now and for future generations), while also calling for increased dialogue and responsibility. Jewish statements have emphasized a number of biblical sources, also highlighting stewardship, justice, prudence, and action; in the case of the 2008 energy policy statement, the authors make a plea for flexibility, realizing that circumstances will change, technologies will improve, and ongoing measures of the problem and the adequacy of our response will need to be monitored so as to assure a sufficient response. Jewish statements also sometimes invoke the ideal of Tikkun Olam, the call to repair the world, as a guiding concept.

One point that becomes clear across the many religious statements on climate change is that virtually no religious community statements disagree with the scientific consensus on climate change. This comes as a surprise to many, because the assumption (echoing the age-old Lynn White thesis) tends to be that conservative Christian views will be environmentally skeptical; however, there appears to be only one denomination that maintains a policy that is skeptical of the scientific consensus on climate change: the Southern Baptist Convention (SBC). Indeed, there is strong overlap in this denomination with political conservatism, but this departure from the overwhelming scientific consensus has also caused a reaction from Southern Baptists, including multiple past presidents of the SBC and other prominent Southern Baptists, who formed the Southern Baptist Environment and Climate Initiative to counteract their denomination’s stance.

Statements on such issues will continue to evolve. The status of climate science in American public and political opinion remains dynamic and no doubt will continue to be a hot topic for the foreseeable future. A recent Yale and University of Cambridge study found that among conservatives who are skeptical of climate change, learning of the vast scientific consensus around climate change tends to soften that skepticism, reducing it by 20 percentage points. [4] This consensus is usually highlighted by pointing out that all national academies of sciences in the world agree with the climate science consensus (none disagree); that there is not a single scientific or professional society that disagrees with the consensus; [5] that the Pentagon, Walmart, and most electric utility companies in the US agree with the consensus; and that 97% of climate scientists agree with the consensus. [6]

This consensus among scientists and among faith communities (save for the SBC) leads to an interesting question: if such an overwhelming consensus exists, then why do so many Americans (and politicians, who still overwhelmingly identify as members of faith communities) say they are skeptical of climate change? Climate denial is not a topic we will engage in great depth in this book, but some related moral and ethical points are unavoidable.

Historian Naomi Oreskes has been focused on this question of American climate skepticism for many years, and she provides a thorough answer, summarized here in a video of a presentation she made at Stanford University. She says that by and large, Americans accept global warming as a fact, but not the scientific consensus that climate change is mostly human caused. This is partly because media reports treat it like it’s a debate, but it’s also because there are forces at work to create the impression of debate. Oreskes documents some of these forces in her book Merchants of Doubt, where she describes the tactics of climate denial organizations (often affiliated with fossil fuel interests), including explicit campaigns designed to create the impression of doubt that now exists in the American public. The presentation slides used by Oreskes in the video link above can be found here, including more extended comments about climate denial PR tactics akin to those used in the past by the tobacco industry (those slides were edited out of the video link above). More recently, peer reviewed studies have paid close attention to the organizations and the funding that has supported climate denial information efforts, revealing that more than $550 million was funneled to climate denial organizations between 2003 and 2010 through foundations that allow the donors to remain anonymous. [7] 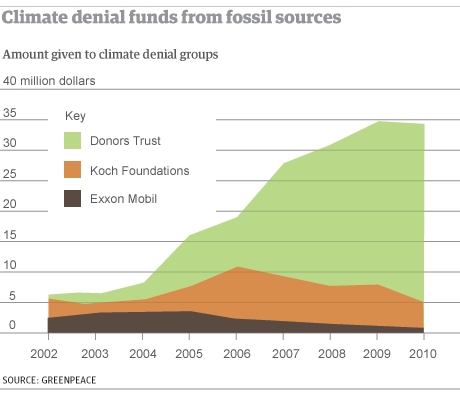 Factors such as these highlight the role of “dark money” channeled from special interests in order to support efforts to create doubt about the overwhelming scientific consensus about climate change. What moral and ethical issues does this raise? On the one hand, PR campaigns by special interests are not necessarily illegal, but are they unethical? Dr. Donald Brown, author of the Ethics and Climate website at Widener University Commonwealth Law School, has questioned if – in the face of what is known about human-caused climate change, and the harms that are already apparent – climate denial is a new kind of crime against humanity.

These questions remain culturally charged. During the early 2000s as the founding director of Ohio Interfaith Power and Light, I was often invited to speak about climate change at Ohio faith communities. Around 2008, I was averaging one talk per week at an Ohio congregation, simply responding to interest from clergy who wanted to host a climate change discussion in their congregation. This interest followed in part from the fact that both Barack Obama and John McCain had campaigned for the presidency by supporting climate legislation. However, after Obama’s election, as efforts to oppose climate legislation escalated, a counter trend emerged. Within a year, clergy were asking for talks not about climate change per se, but about “how to talk about climate change,” because the topic was becoming controversial. By 2010, I regularly heard from mainline and evangelical clergy alike that climate change was too divisive a topic to discuss, and congregations began to shift their environmental discussions to subjects like food security and sustainable agriculture. Indeed, think tanks funded by fossil fuel money had also been at work creating materials to convince American faith communities [8] that environmentalism is dangerous, un-Christian, un-American, or a threat to freedom, such as in the “Environmentalism as a Green Dragon” materials developed by the Acton Institute/Cornwall Alliance. [9] Climate skeptics, it would seem, are aware of the power of religion to influence public views on environmental issues.

As a counter trend to these well-funded efforts to delay climate legislation, faith communities themselves across a range of traditions have been at the forefront of movements to divest from fossil fuels [10] and have actively supported international climate legislation negotiations. [11]It remains to be seen how much such efforts and the existing array of faith-based climate change statements will offset the millions of dollars being spent by the world’s most profitable companies of all time, [12] who are not afraid to manipulate moral language to protect their profits. At the moment, climate ethicists like Donald Brown may be the most explicit voices calling attention to moral questions like these, but religious leaders continue to address these challenges as well, such as former Presiding Bishop of the Episcopal Church in the United States, Katharine Jefferts-Schori, who has also called climate denial immoral. [13]

It is easy to see why climate change makes such a dynamic case to see the many factors at play in religious environmental thinking and action – this is not a realm of simple answers and easy descriptions, but rather a topic of wicked complexity. Some might say that God only knows how this will all come out! We will have to stay tuned. But at the same time, the emergent character of faith-based climate change activity is representative of the larger movement of religious environmental and sustainability engagements: emerging, dynamic, diverse, evolving, norming, and linked to a mix of social, political, and historical factors. Just like those who seek to capture a moving target – keen attention is required!

Even with the dynamic and culturally charged character of climate change concern in the US, it remains the case that the vast majority of religions emphasize the importance of dealing with climate change:

“Climate change is a global problem with grave implications: environmental, social, economic, political and for the distribution of goods. It represents one of the principal challenges facing humanity in our day….There is an urgent need to develop policies so that, in the next few years, the emission of carbon dioxide and other highly polluting gases can be drastically reduced, for example, substituting for fossil fuels and developing sources of renewable energy.” (Pope Francis, Chapter 1, paragraph 25 & 26 of Laudato Si’, 2015)

“Tibetans are patient and can wait ten more years. But the environmental and climate crisis are so dramatic that they can no longer wait for concrete action. Especially in Tibet, on the Roof of the World, we can feel the ecological crisis only too clearly. The climate change leads to a heavy glacier melt and thus to a dramatic water problem for more than a billion people in Asia. Nature cannot wait any longer. The ecological question is the central issue of the survival of mankind.” (Dalai Lama, Interview with Franz Alt [14] , 2011)

Climate change is a moral challenge threatening the rights of the world’s poorest people and those who deny it are not using God’s gift of knowledge. (Paraphrase [15] of Katharine Jefferts-Schori, Presiding Bishop of the Episcopal Church in the United States of America, 2015)

“Climate change is much more than an issue of environmental preservation. Insofar as human-induced, it is a profoundly moral and spiritual problem. To persist in our current path of ecological destruction is not only folly. It is suicidal because it jeopardizes the diversity of our planet. Moreover, climate change constitutes a matter of social and economic justice. For, those who will most directly and severely be affected by climate change will be the poorer and more vulnerable nations (what Christian Scriptures refer to as our “neighbor”) as well as the younger and future generations (the world of our children, and of our children’s children).” (Ecumenical Patriarch Bartholomew, 2005) [16]

With such a clear collection of moral voices calling for action on climate change, perhaps it is not surprising that climate denial efforts have accelerated so much in recent years. It remains to be seen what the long term policy impact will be of religious views on climate change.