Beyond the diversity of Christian perspectives, there are of course many other world religious perspectives we could explore, and now we will move on to consider the vision of David Loy, a Buddhist scholar and primary author of the Buddhist statement on climate change referred to in chapter 9 (whose first signator is the Dalai Lama). Loy’s perspective on humans’ individual and collective environmental situation was developed in an article titled “Healing Ecology.” As we would expect, it is different from Niebuhr’s perspective, but there are also points of connection between the two.

To start, Loy reminds us that there is a larger view of “What’s going on?” in Buddhism that is described by the Doctrine of Anatta, the not-self, which says that there is no self independent from the rest of the universe. Everything is connected (there is oneness). We are interdependent with all beings, animate and inanimate. Because this is true, autonomy is a path to unreality and suffering.

From that basic understanding, the key point is that our delusive sense of self is intrinsically related to dukkha, which is suffering in the broadest sense: dissatisfaction, discontent, anxiety, inability to be happy. The fundamental delusion is: I believe something outside myself is the solution to my sense of lack. Our sense of self is delusive in part because it is dualistic, when in fact, peace is to be in accord with reality[1], which is a oneness. As such, the self is not something we can get rid of, because it doesn’t exist in the first place. These contextual points about the human predicament suggest a scheme somewhat like the following: 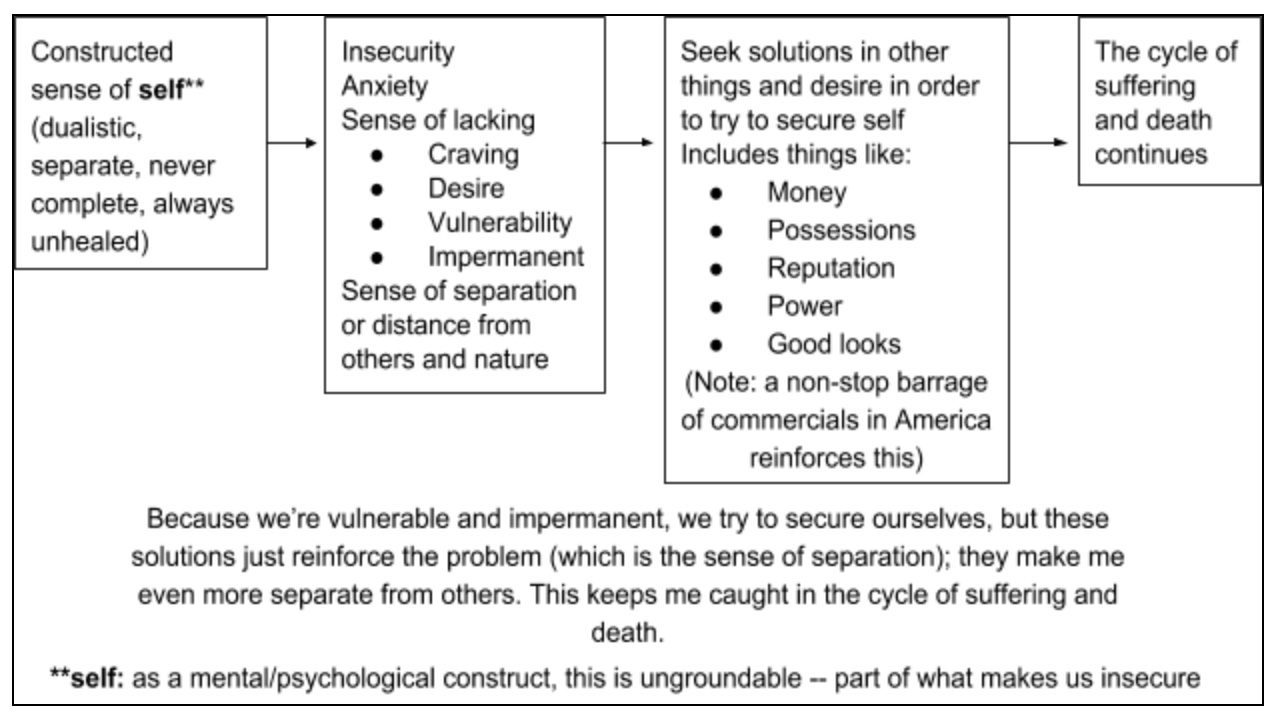 Here the trouble begins with humans’ sense of self, which as a delusive mental construct, is ungroundable, thus the ‘self’ is never complete or satisfied. This dualistic, separated[2] state of being leads to insecurity, anxiety, and a sense of lack, which fuels craving and desire. As we try to secure our ‘self’ through money, power, possessions, etc, we remain ever more stuck in this cycle of suffering and death, because building up this delusive ‘self’ makes us more and more separate from others, thus reinforcing the fundamental problem of trying to inhabit the ungroundable space of a ‘self.’

There are some obvious points of overlap here with Niebuhr’s scheme in the depiction of the human situation of anxiety and insecurity, and this might cause us to pause and wonder whether Niebuhr and Loy would say they are describing the same reality. Niebuhr’s work was written long before the modern environmental movement, and Loy’s was written largely in response to environmental concerns, so Loy provides a great deal more specific description of the potential environmental ramifications of a Buddhist way of seeing the world and a Buddhist path forward both individually and collectively.[3]

In response to this problematic human situation, rather than remaining stuck on the path of anxiety and craving and dualism and trying to build up the self, we can take the path of enlightenment, see the Four Noble Truths, and follow the Noble Eightfold Path (and consider the Bodhisattva path). The path of enlightenment starts from our situation of suffering. By suffering, we think of birth, aging, sickness, death, sorrow, lamentation, pain, grief, distress, despair. This suffering comes from the dualistic, separate sense of self, which – because it isn’t real – makes us feel perpetually incomplete and unhealed. In our ignorance, we resort to craving, and it’s our craving/desire that causes our suffering. We think we can ground ourselves with things that we crave, so we try to secure ourselves. Alternatively, however, amid our suffering, we might gain enlightenment, like the Buddha did sitting under the Bodhi tree long ago.

That starts with the Four Noble Truths, in that realizing these truths engages us in the process of enlightenment:

The enlightenment gained from realizing the Four Noble Truths can then be practiced and integrated into our lives through the disciplines of The Noble Eightfold Path:[4]

The end goal or experience of this process is achieving nirvana and escaping the cycle of suffering and death (cease dukkha and achieve self-awakening, which leads to liberation).

Another description of the “path” that Buddhism commends is the Middle Way – the path Buddha discovered that led to liberation. It is moderation between the extremes of sensual indulgence and self-mortification; it is the path of wisdom.[5]

Achieving nirvana is to escape the cycle of suffering and death – to be liberated from it. Yet there is more, because if you are truly connected to everything else, then any other’s suffering is your suffering; even if you liberate yourself from suffering, to leave it at that separates you from the all of which you are a part. Herein lies the Bodhisattva Path, which is when an enlightened one who could leave the world of dukkha sticks around to help the rest of us, to work for the complete enlightenment of all sentient beings.[6]

Another way to envision this is to think about meditation and practice. In meditation, we can deconstruct our sense of self – meditation gives us the space to see the world rightly, to see what’s really going on. So we see dukkha as it is and realize the Four Noble Truths about suffering. I wake up and see that the self is delusive, and realizing non-duality, I am freed to live as I choose (but that will be a way that contributes to the good of the whole because I’m part of the whole), and that is the realm of practice. Practice includes meditation, which allows us to reconstruct our sense of self, replacing greed, ill will, and delusion with generosity, loving-kindness, and wisdom. It includes following the Eightfold Path to be free from suffering. Doing so, we are living in meditation and practice and are able to achieve nirvana and escape the cycle of suffering and death; however, on the Bodhisattva path, we stay in the world of dukkha to help others, because if we are truly “not self”, then others’ dukkha is our dukkha.

A concept from cognitive psychology is worth noting here: research shows that repeated action (habituation), learning, and memory can actually change the nervous system physically, altering both synaptic strength and connections. Such changes can be brought about by cultivated change in emotion and action, and they will, in turn, change subsequent experience. It would seem that we can truly re-think and re-feel our “selves” through a process of meditation and habituation. If we do NOT, however, if we remain in a delusive sense of self, seeking fullness from other things, following desires, we merely reinforce the problem, and we remain in suffering.

Loy also outlines a collective version of this as it pertains to the environment. He asserts that we have a collective sense of separation (culture) from nature – we have a loss of faith in God[7], leaving us rudderless – and we have powerful technology that makes us think we can do anything. But, amid this, we do not know what our role is, what we should do. Subsequently, if we can’t depend on God or godlike rules to tell us how to live, we are left with only ourselves (who lack grounding greater than ourselves and thus generate greater dukkha, collective and individual!).

As such, Loy says the modern sense of separation from the natural world has become an ongoing source of alienation and frustration. For the anxious “self,” we try to solve it with other things – we compulsively crave and acquire and consume. For the anxious collective, we obsess over “progress” and growth, thinking that more is better, bigger is better. But remember that what is true for human reality is not-self, so awakening to the delusion of self and taking a path of unselfing is the path to liberation. For the collective, what is is that all things are connected, so awakening to the delusion of selfish hoarding and competition (which is really fighting against self – a house divided) and forging solidarity is the path to peace.

So, as we wonder what we should do, Loy notes that technology and economic growth can’t themselves resolve the basic human problem – they may be a good means to accomplish something, but they are not good ends in themselves. Since we don’t really know where we want to go or what we should value, we’ve become demonically obsessed with ever-increasing power and control. As such, Loy says, eco-crisis is inevitable – sooner or later we bump up against our collective compulsive project of endless growth and never-enough control. The collective problem is that trying to control the world for our purposes makes it “resources” to use, but that doesn’t yield security. So, what’s the collective awakening that can save us? It may be to see that we’re not separate from the biosphere so that we can become the collective bodhisattva[8] of the biosphere.[9]

Ok, so that’s Loy, and he seems to be a very smart guy. Another very smart guy, Albert Einstein, said: “The true value of a human being is determined primarily by the measure and the sense in which he has attained liberation from the self.”[10] Maybe there’s something to this. That is not to say that there are no critiques of these ideas – we will attend to some of them in the next chapter. 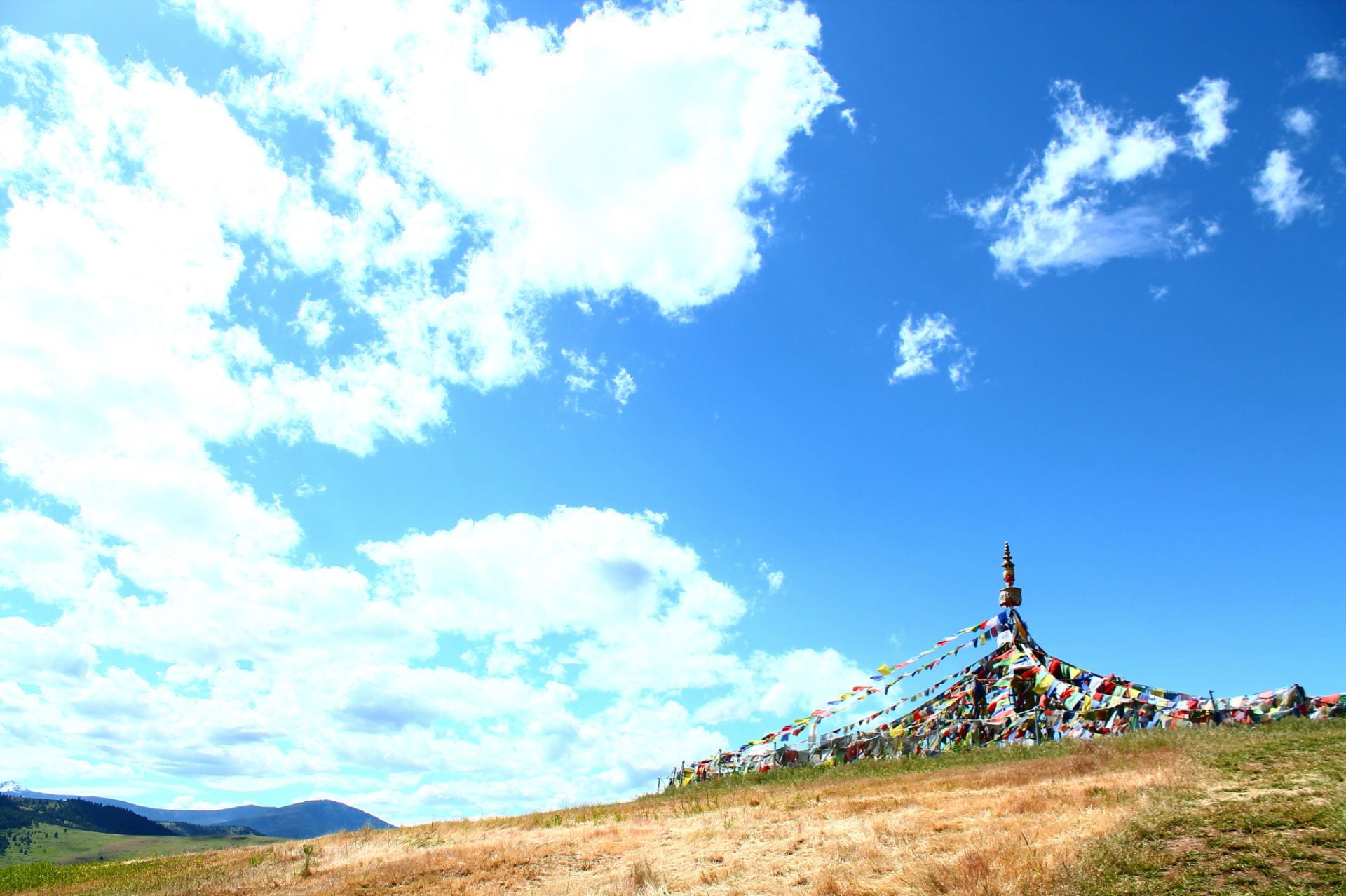