Chapter 1: The Basic Landscape of Religion and the Environment in America

A couple of years into my doctoral work, as I discovered more and more evidence that religious perspectives on the environment weren’t as negative as my professors seemed to think, I found myself in passing conversation with a faculty member at Cornell in the natural sciences. When he heard about my area of study he asked me, “Correct me if I’m wrong, but isn’t Judeo-Christian tradition the source of our exploitative attitudes towards nature?” I couldn’t adequately respond given the brief nature of the conversation (I wanted to say, “well, you probably are mostly wrong, but how long do you have to talk about it, because it’s not easy to see!”). To some extent, the first two chapters of this book are a more complete response to that question.

Given the tendency for negative expectations to linger regarding religion and the environment[1], I think it’s important to try to set aside personal expectations, and take a fresh look at what seems to be going on. Anyone who already dislikes or mistrusts religion, for instance, may have a very hard time taking an objective look at the evidence, just as someone who strongly promotes religion might also see most of this dialogue from an only pro-religion frame. I think it’s helpful to look at various indicators of the trajectory of religious-environmental thinking, scholarship, and programming. It seems wise to suspend judgement about how we think religion operates in the environmental sphere until we have a better sense of the landscape of religious-environmental activity.

Religion continues to have a significant presence and influence in America.[2]

One indicator of how much religion has been pro- or anti-environmental in American culture is seen in the news clips database studies I noted above. Through the 1990s in America, as awareness of the public was just starting to dawn on the topic, almost all religion-environment news centered around how religion was supporting environmentally protective views. Further study is needed of this period, but I think it is no accident that by the end of the 1990s when a broad coalition of religious organizations had emerged to support environmental protections (particularly in regards to climate change)[3], counter-messaging emerged using religious language to oppose carbon legislation. This counter-effort included a coalition of religious figures, not representing any denomination, but gathered together by a free market economics think tank with funding from fossil fuel interests. It is likely a testimony to the growing impact of faith-based climate advocacy in the 1990s that this counter-trend emerged; I would note that the advocate coalition grew out of faith communities, and the opposition grew out of fossil-fuel funded think tanks to oppose climate legislation. The former seems to be an example of faith communities putting their faith into action, the latter an example of special interests trying to use religion to protect corporate profits. So I suspect that if someone were to do a content analysis of news clips from the 1990s to the present, they might find a different balance of positive and negative frames, as this industry-sponsored counter current has grown.[4]

One other interesting observation emerged from the news clips data. I re-examined the 1,800 articles from 1992-1998 to see whether they were articles that came from a news wire service and made “national” news (such as when a faith-based environmental group like NRPE held a big event that got lots of attention), or whether an article was just an example of local writers reporting about something environmental that a congregation was doing. Interestingly, while the majority of news hits in the early 1990s followed from news wire reports around the founding and early initiatives of the NRPE, as the decade went on, the ratio of local to national news stories got larger and larger, until by the late 1990s, the majority of stories were coming from local examples and had nothing to do with the programs of NRPE or any other faith based environmental organization.[5]

Recognizing that media trends might be fickle, I decided to look at more reliable indicators of the extent to which religious environmental thinking was developing in American faith communities. Librarians at Yale suggested I explore the American Theological Library Association (ATLA) database of theological literature. I wondered just how much attention was being given to environmental and ecological matters in the theological literature, so I searched, year by year, from 1960 to 2010, for any articles with “ecology” (or “ecological,” etc) or “environment” (or “environmental,” etc) in the title.[6] After updating that study in the early 2010s, here were the results[7]: 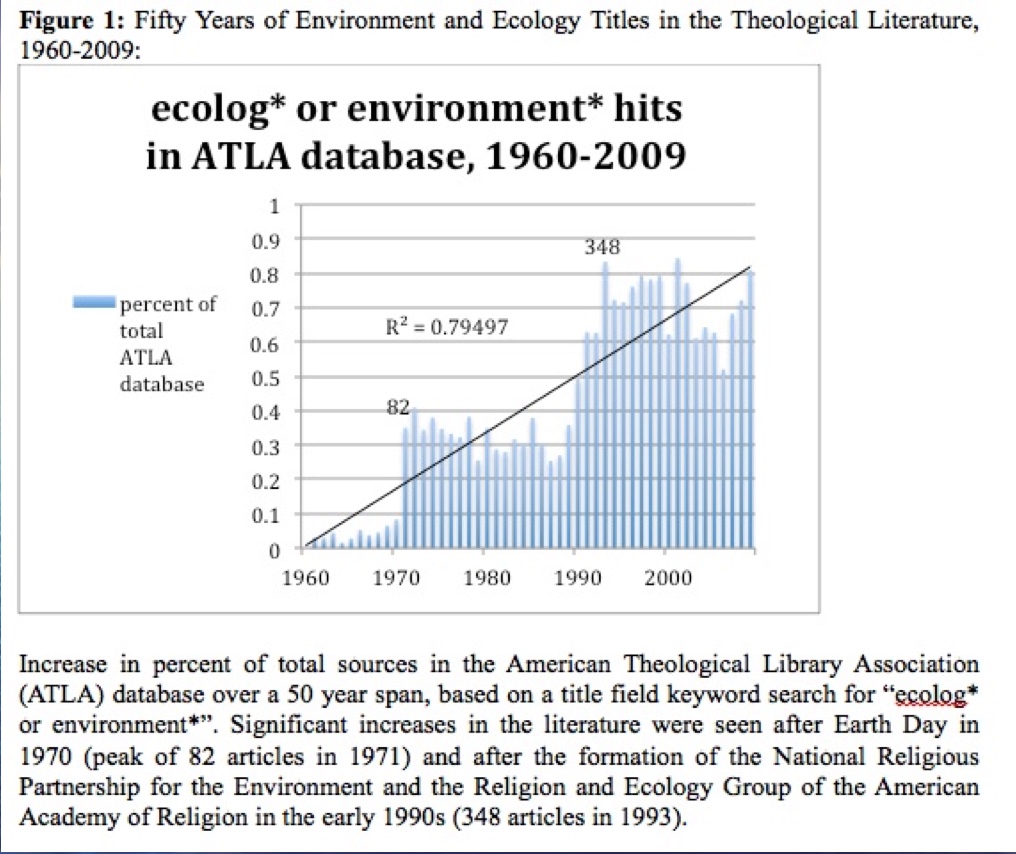 Two things immediately stick out: the trend in environmental theology literature is increasing over time, and there have been two quantum leaps in the literature, one around 1970, the other around 1990. To add some historical perspective, Dr. Richard Baer recalls trying to publish theological articles about the environment in the 1960s, when Baer and others were founding the Faith, Man, Nature[8] study group through the National Council of Churches. Ethics and theology journals were hesitant to publish on the topic because, as Baer and his colleagues were told, the “environment” wasn’t a serious ethical subject. At that time (the mid- to late 1960s), issues like civil rights and the Vietnam War dominated ethical commentary, and environmental concerns were famously characterized as only the worry of birding clubs and “little old ladies in tennis shoes.”[9] Baer contends that Earth Day in 1970 changed that, because it caused a huge shift in interest toward environmental issues, at which point publications about the environment multiplied significantly across many fields (not just in theology).

Baer remembers that a focus on the justice dimensions of environmental issues also helped open up theological attention – once it became clear that environmental degradations had disproportionately harmful effects on the poor and vulnerable, the existing social justice programs of faith communities began to engage the issue and tapped into deep and long-term structures and traditions of working for positive social change. This likely partly explains why the mainstream Catholic and Protestant arms of the NRPE (the Eco-Justice Program of the United States Conference of Catholic Bishops (now complemented by the Catholic Climate Covenant) and the National Council of Churches Eco-Justice programs (now represented by Creation Justice Ministries) have long operated under an Eco-Justice banner.[10]

The second jump in the literature, around 1990, is likely the result of several relatively concurrent developments in the field. I also graphed the citations catalogued in Joseph Sheldon’s bibliographic study, Rediscovery of Creation: A Bibliographic Study of the Church’s Response to the Environmental Crisis (1992), from 1950-1990, shown here: 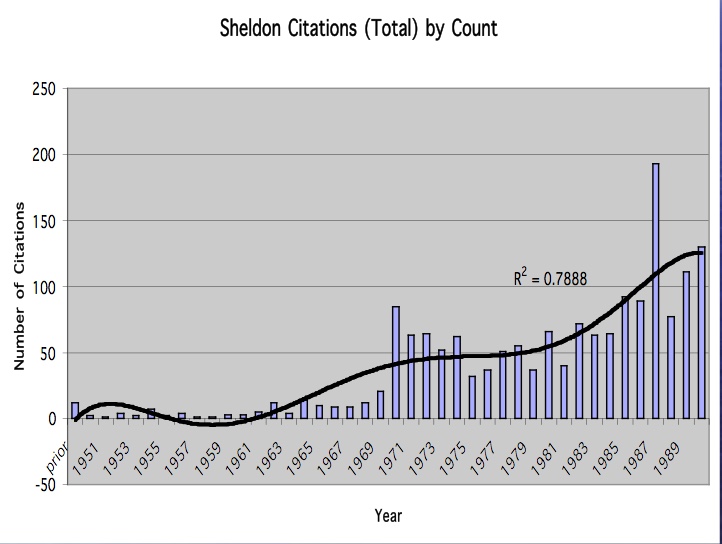 Sheldon’s study of the literature also shows the jump in 1970 and a rising trend through the 1980s with a particular spike in 1987 that isn’t shown in the ATLA graph. One explanation for this spike in 1987 is the “unpublished” literature that came out of the North American Conference on Christianity and Ecology (NACCE), which convened in 1986. The NACCE drew together several hundred of the scholars and organizers who were doing faith-based environmental work at the time and who subsequently published summaries of their presentations that Sheldon’s bibliography would have included but wouldn’t be searchable in ATLA. 1986 was also the year that the Alliance for Religions and Conservation got its start following a gathering of religious leaders in Assisi, Italy (St. Francis’ home) convened by the World Wildlife Federation. Both of these events were influential for Paul Gorman, the founder of the National Religious Partnership for the Environment, and its precursor organization, the Joint Appeal by Science and Religion for the Environment, which saw the evidence of this budding growth of environmental scholarship, organization, and concern among faith communities, and worked on making connections between and across denominations in the U.S. Another significant influence at this time was the formation of the Religion and Ecology Group of the American Academy of Religion, which encouraged the contributions of religious scholars. Undoubtedly, some combination of these and other influences accounts for the jump in the literature around 1990.

Unlike the news clips database that I’d worked on at NRPE, I did not attempt a content analysis of the ever-expanding eco-theology literature, but one of my criteria for applying to graduate programs in religion and ecology in the early 1990s (before any official such programs existed) had been to search the library catalogs of those universities, to see how many titles they carried that would be relevant to religion and ecology. Yale’s libraries were significantly better stocked than any other place I considered (only Harvard had comparable holdings), and so I was fortunate to have a lot of this literature at my fingertips. I spent hours, days, and weeks in the stacks of the Yale libraries browsing as much of this literature as I could, and while I did not quantify my impressions in any systematic way, I saw a similar pattern to that I’d uncovered in the news clips database – this literature overwhelmingly consisted of books and articles focused on how theology reinforces environmental ethics themes, and I almost never came across literature that indicated a negative stance toward the environment.[11]

If the theological literature has been growing steadily in its environmental interests since the 1960s, what about the inclusion of religious topics in the ecological literature? Perhaps predictably, that literature is also increasing, but only started to emerge significantly in the 1980s[12]: 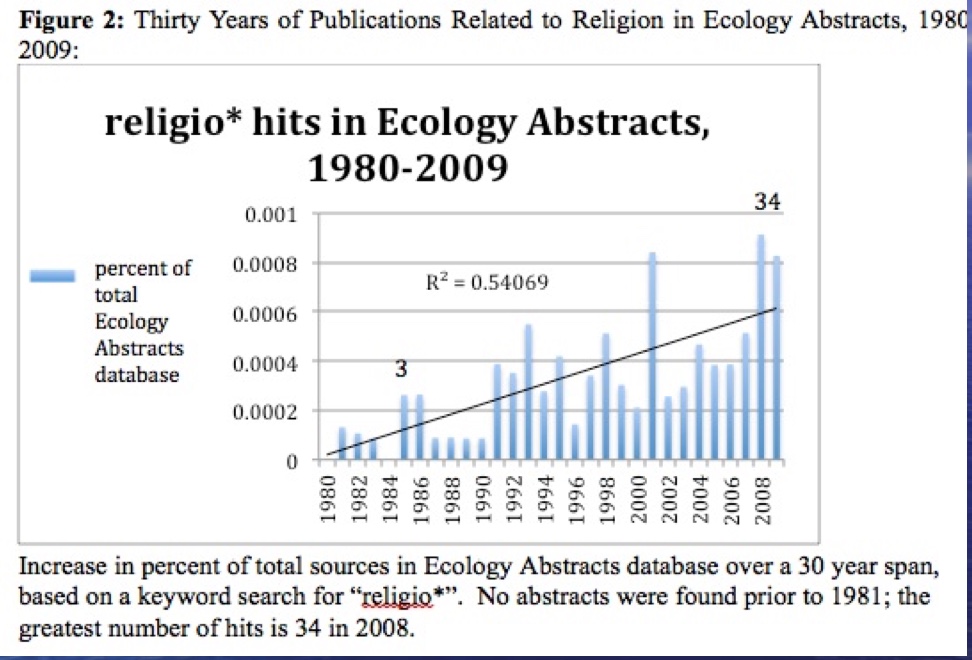 In large part, the articles that have begun to emerge in the ecological literature focus on habitat studies of church-owned land (some of the only forests remaining in Ethiopia, for instance, are known as “church forests” that were protected from cutting because they were on church property), or on how particular religious traditions or rituals or customs might have a local ecological impact in some part of the world.[13]