1.1 In the Beginning: Finding Purpose 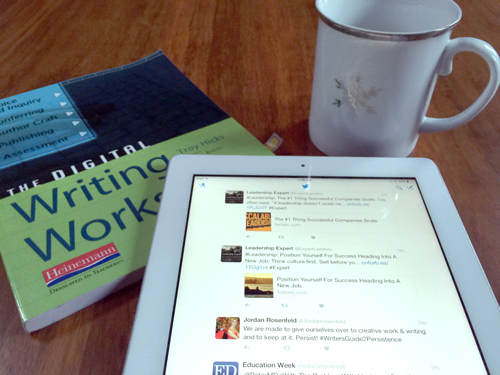 I’m not sure really where the transition to digital literacy started for me. Like learning to read decades ago, the transition is fuzzy and grey. Was it with Twitter? Was it my group of friends and colleagues that pushed my thinking? Was it the ease of using digital tools? Was it the fact that my notebook was sometimes at home, but my phone was always with me? I’m not sure what made me make the move to a more digital world of literacy, but I know I found my place of comfort there one day at a time as I discovered new uses and purposes in our digital world. I know learning and working in digital spaces has helped me to meet new people who push my thinking each day and changed my writing and reading life. I know that what I was reading, discussing, and sharing digitally changed my professional learning. I know these changes eventually transitioned into my teaching.

I suppose the journey into digital literacy began on a long car ride to Michigan. I was with a group of teachers on our way to a conference. The car ride was full of conversation. We easily transitioned from conversations about our families, to our busy lives, to teaching, to learning, to social media. Yes, social media. A few of the teachers began talking about Twitter. “Did you see what so and so said on Twitter? I couldn’t believe he posted that tweet,” said one. “I have to keep following him because I look forward to seeing what he will say next,” added another.

The talk about Twitter went on and on in the car. I felt lost in the conversation. I’d tried Twitter, but I didn’t love it. What was so amazing about hundreds of tweets flashing across your screen in an unorganized jumble of thoughts? Finally, I couldn’t take it anymore and spoke up. “I get Facebook,” I interjected meekly. “Facebook helps me keep up with friends and family I might otherwise lose touch with in my busy days. I love celebrating with friends, learning more about their families, and keeping up with so many people. Facebook I get, but Twitter just isn’t working for me.” A quiet hush fell across the car. I’m pretty sure I had just committed a social faux pas and they were all wondering what they should say next. My friends quietly exchanged looks with one another. There was an uncomfortably long pause in conversation. Finally one of my friends broke the silence, “I didn’t like Twitter at first either,” she gently inserted, “but then instead of using Twitter personally I began to use it professionally. My thinking about it changed as I found a purpose that worked for me. Give it six months and see.”

Knowing my friend never steered me wrong I thought carefully about her words. Maybe I would like it more if I used it professionally. Maybe I would find something interesting if I tried for a bit. “I hadn’t thought about it like that,” I acknowledged, “I’ll give it six months.” That’s what I said, but I wasn’t buying it. I didn’t think anything would change my mind. Days passed, then weeks, and soon six months had come and gone. I had gone from watching tweets to connecting with others, from collecting to sharing.

It wasn’t long until I found a love for Twitter as I learned from people in so many places. To be clear about how much I grew to love Twitter, I now have three different accounts, have built a large network of people I follow. Using social media purposefully to learn, to question, to collaborate, and to share professionally engaged me in this network. With Twitter, I didn’t feel isolated in my classroom anymore. I didn’t feel limited to learning by my physical space. Instead my learning opportunities grew as I built connections with other professionals digitally. Twitter led me to blogs. Blogs led me to new people to learn from each day. New people led me to new tools. New tools led me to new possibilities. It wasn’t long until I began discovering new purposes in a variety of digital spaces. I also began to notice the discrepancy between the digital world I was living in each day and the way I was teaching. I realized that my students needed these same opportunities.