1.5 From Traditional to Digital Writer 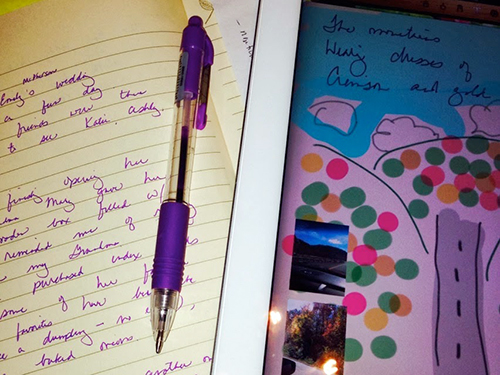 For me, finding the purpose in working digitally has always been the first step in getting started, but there have been other opportunities that have helped me along the digital path.  Joining local groups of similarly minded educators pushed my thinking.  We had tech nights at each others’ houses.  We formed groups discussing books about digital literacy.  We created small writing groups that worked digitally as well as in person.

I’m thinking my transition has always been about engaging in our literate world.  Digital spaces create new ways to work, collect, compose, learn, and share.  If I could find a reason for the work I was doing and could make it fit into my world, I was often more likely to embrace the new way of digital functioning.  Finding reasons to move from traditional writing to digital writing go back to purpose.  For me, digital writing was easier.  I was faster at typing and my words were certainly much easier for my reader to read.  I liked the ability to connect with others and to have virtual discussions.  I wanted to be able to share my thinking and have others push it further.  While many of the beliefs I have about writing stayed the same as I went digital, the way I worked changed.

As a writer I value keeping ideas I might use later in writing.  It’s helpful to have a space to play with writing and try to make ideas work.  While I used to collect ideas in my notebook, I was finding new ways to collect ideas digitally. Often ideas pop into our minds at unsuspecting times:  a conversation overheard, a flash of memory, a place newly discovered, a traffic jam.  Often ideas for writing came when my notebook wasn’t with me.  I began to find myself more and more often using my phone to collect ideas.  My phone was always with me.  I’d use list apps to keep track of general ideas. I’d write longer snippets in my notes, later moving to a virtual Moleskin notebook, then Evernote, and currently I most often use Google Drive.  I’d capture pictures to remind me of writing possibilities.  I recorded voice memos as I thought out loud and planned future writing.


As a writer I used to draw and sketch ideas in my notebook –
or on napkins and post-its, now I use digital spaces.

To plan my writing I also found myself more often using applications on my iPad to sketch images, map out ideas, and play with words.  I searched for applications that allowed me to draw, write, type, add voice, use color, insert pictures, and use multiple pages.  My go-to app has been NoteShelf as it has a notebook feel.  It looks like a notebook.  It works like a notebook.  It turns pages like a notebook.  It has a nice collection of pen colors and sizes.  I’ve also experimented with PenUltimate which allows more writing by hand, Notability which is perfect for annotating, and Moleskin which works well for catching small ideas.

Of course, I’ve learned tough lessons along the way. When my iPad had to be taken back to factory settings I lost everything in my notebook.  I’ve learned to rely more often on applications with cloud storage possibilities or ways to save into Evernote, Dropbox or Google Drive.

As a writer, I used to write for myself,
but now I for an audience.

As I became more comfortable with digital tools and more intertwined in conversations across internet spaces, I found myself writing less often in my notebook and more often on my blog.  This was very different writing as I had to be much more thoughtful about audience.  It wasn’t easy to put my first writing out into the world.  It wasn’t easy to share my thinking knowing that in a week I might change my mind.  It wasn’t easy to have people I didn’t know to read my writing.

Gradually though I began to become more comfortable with writing for an audience.  It forced me to work hard to think through complex topics.  It forced me to push the quality of my work which was no longer tucked away between pages of a closed notebook.  I began to look forward to the comments people left on my blog.  I looked forward to hearing about the ways people connected to my posts, thinking about the questions they asked, considering new ways to think about a topic, and learning from their reflections on my writing.


As I writer I used to write when I wanted to write,
but now I feel more accountable.

When most of my writing went into a notebook, I wrote when I felt like it.  I tried to plan consistent times and form a habit of writing regularly, but my routines ebbed and flowed.  Moving to digital spaces for writing has made me more accountable to writing routines.  I host two blogs.  My first blog is mostly for writing about education and the other blog is more of a play space.  On my first blog I write posts about teaching, literacy, technology, and other items related to the work I do with children.  On my second blog, I play.  This blog is the space I write poems, narrative essays, and short pieces related to the daily aspects of our world.  This is the space where I join weekly conversations like Slice of Life and Poetry Friday.  Because I have these digital spaces I find myself feeling more accountable to regular writing.  I try to get posts out on a regular basis.  In my notebook it was easy to let writing opportunities slip past.