After thinking and reflecting on this experience, we decided that the children needed to be taught how to make sure that their writing looked its very best as well. If they were ready to publish their posts, there were some responsibilities that would come with that and that they would need to take them on. If they didn’t want to publish without input, then they needed to save their drafts and keep writing. We talked about things that writers needed to consider, and created a chart together as we were talking. We reflected on the list and then we decided that we had enough to think about for now. The children wanted to get started!

We discovered that charting our thinking was very important because we were learning and doing so much. We wanted the writing (even charts) to be authentic, so we always created charts with purpose in mind and revised them regularly. As we wrote, we found that there were more things to remember and that there were things on the chart that we no longer needed because they had become a part of our daily habits. 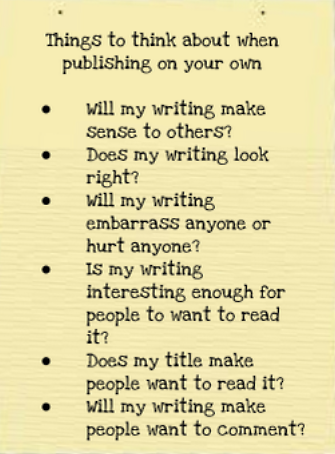 While some of the children were writing and publishing on their own, many of the children needed the traditional structure of: write a little, conference, write a little more. This was absolutely fine with us as we had taught the kids that writers have different processes and that it is important to find what works. We found that the conferences took the same shape as our more traditional workshop conferences, with one BIG difference: The children were very willing to go back and reread to make changes to their writing. This was a HUGE shift for the kids! They had always loved talking about their writing and changing things out loud, but when it came time to change it on paper, it often didn’t happen. The children found it to be too much on paper. We talked about how it is an essential part of living the life as a writer, but I had to constantly prompt … until we wrote digitally. The children began to take this responsibility on independently. As a writer, I understand completely. The process of rewriting, cutting, gluing, revising and editing is painful when you have hand written an entire piece. If they were like me, it would have been very painful to have their writing look messy. When writing digitally, cutting and pasting is much easier. It’s just a few clicks away. Once the children get the idea of how to edit and revise digitally, they quickly become independent and very willing to do so.

Megan and I saw the children going back into their writing, rereading and making changes as they went. When we sat down to conference, the children were telling us about changes that they had already made to their writing rather than doing it as we sat next to them.