Chapter 3: Digital Reading and Writing to Connect with Others 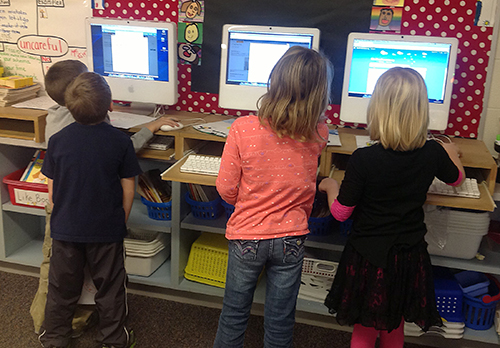 This experience was pivotal in shaping who I am today as a person and an educator.  I was able to share with my students the power in connecting with others who come from different backgrounds and learning that our differences aren’t so different.   With the perfect tool in mind, questions and wonderings already posted in our blog we gathered on the carpet to begin what would become our global journey. Twenty-three six year olds, 2 tubs of books, and five desktop computers, 1 VoiceThread account 1 teacher Twitter account and we were confident this was the start of something unstoppable.

I introduced VoiceThread to all twenty-three students on one 17” monitor. They watched as I showed them how to add a slide, a photo, a  comment and how to reply to a comment.The opportunity to connect with classrooms in other countries was overwhelming, but we had to start somewhere and this is where we were. The fire had been lit.  We had the beginnings of an audience and we were moving forward.

After the demonstration lesson the learners set out to create our first global interaction. Some ran to grab books and others decided to create illustrations to frame their questions. Students worked in partners deciding how they could best share and ask others to share back. 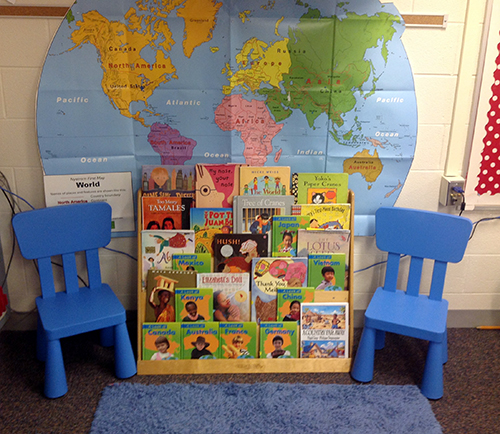 The conversations around our room were genuine.  These first graders knew they were sharing  around the world! They never doubted the ability or the power of the work they were doing.  We had read books like Wake Up, World!: A Day in the Life of Children Around the World  and Let’s Eat: What Children Eat Around the World by Beatrice Hollyer and several others as a means to understand the practices of other cultures.

But now we were actually going to share and talk with children from  around the world and we wanted to know:

We were building connections with other classrooms; we were becoming truly global. No longer would we have only 23 voices in our room.   We were adding international voices that would move us to see new perspectives.  This example is just one that shows how digital tools have the power to teach my students acceptance.

After the VoiceThread was created and shared on Twitter we waited.   We checked for comments throughout the day and wondered why no one was commenting. The students were fascinated when I explained our global classroom friends would be sleeping while we were in school and we would have to check tomorrow morning for response to our questions. When I went home that evening I was also a bit worried about the lack of interaction on VoiceThread. I retweeted the link again, hoping to reach a side of the world who would have been sleeping when we sent the first tweet. I resent this tweet about every hour, each time asking those who read the tweet to please keep our tweet active in the twitter feed by retweeting. It wasn’t long until @MGraffin from Australia replied to the tweet promising his class would share in the VoiceThread. I could hardly sleep.   I kept rolling over to check my twitter account for more replies! @MGraffin kept our tweet alive as we slept and this was a key factor in growing the Global Classroom. @MGraffin’s location in Australia allowed our tweet to speak for us as we slept, reaching an audience on the opposite side of the globe.  The next day as the students began to enter the room I explained how our one tweet had grown into several tweets all through the night. The kids were again shocked to know a whole other part of our world was awake while we slept.  As we gathered in our morning meeting, we checked for comments on the VoiceThread. This day we had only one, but it felt like ten!

We were all so excited to hear @MGraffin’s voice and his accent! Mr.Graffin left us the promise of more to come. The excitement on the faces of the students was compelling.  I quickly showed them how they could check for comments on their own when they came in the next morning. The next day I logged in the desktops to our Global Classroom VoiceThread so they would be ready when the students entered the room. I stood back and watched in amazement as students entered the room and went straight to the computers anticipating new interactions. 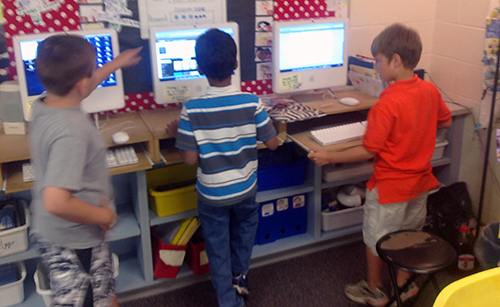 Groups of kids gathered around the few computers in our room listening to others share about their country. Sounds of national anthems from India, New Zealand and Australia all played at once as the students listened to the comments.  Kids ran to the library as they were asked to share more about our country and to think about the meaning behind our symbols and traditions.  Jaws dropped as the kids realized students from other countries often spoke more than one language.  I felt a sense of pride and the beginnings of something I once thought unimaginable as I listened to the voices calling each by their names. This was an audience of choice each interested in the other, pushing each one to think past what they assume to be true to find the deeper answers, the answers that matter.