4.4 Responsibility to Others: Commenting

Because we knew that we wanted the students to have the same benefits we did from being a part of a digital community, we took the time to read their posts and pay attention to what they were trying to do, and what they needed to do next. This was what I had always done with student writing folders or notebooks in the past, so it made sense to continue the same process with student digital writing. We hadn’t stopped to do it before because everything was moving so fast. We found that if we carried our iPads with us as we walked around the room, we could comment as the students wrote, and keep notes on what we were noticing. It was  important to us to take the time to look over the children’s writing, so that we could share ideas as we planned lessons and revised our own thinking as we taught.

One of the things we noticed was that as much as they loved writing digitally, the students were not taking the time to carefully read their peers’ writing. Their comments were very simple and often asked questions that were answered in the writing. In the example below (from our swag blogger), you will notice that Erinn’s first response to the post was, “Sooo cool”. Megan and I agreed that this was not the kind of response we wanted to see. It was very short and didn’t push the thinking of the writer. 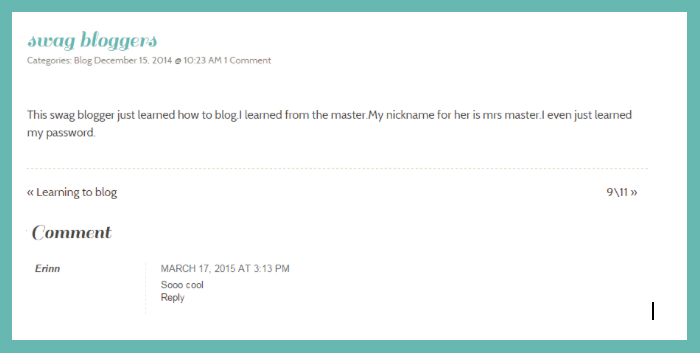 Megan and I wanted the comments to provide an opportunity for an open dialogue between the writer and the reader.  We noticed the students’ comments followed a pattern. They would say one thing and ask a question. Knowing that oral storytelling can help young writers organize their thinking, I talked to Megan about the benefits of having the students orally comment on some posts. It hoped it would help them get the idea of writing a more fully developed comment. We projected a blog post on the screen and we drafted a comment together, using chart paper.

As we reflected, we decided that comments should:

Looking at posts and comments, with conversation surrounding this reading, really helped the students to begin to shift in their thinking and in their writing. As you can see, in the student’s second comment, following the mini-lesson, she is more thoughtful in her response. She commented on what she had read and then she asked for more information.

Even though the comments were improving overall, we noticed that some of the children were writing emoji responses, or incomplete sentences when commenting. I had to dig deep as a digital writer and commenter myself. I decided that the children needed to focus on commenting in a way that would help the other writers to grow either as a writer, or as a person. This was going to take practice and feedback. Megan and I committed to making sure that we were providing timely feedback to the students as they stretched their own thinking about commenting.