4.5 Responsibilities as a Digital Reader 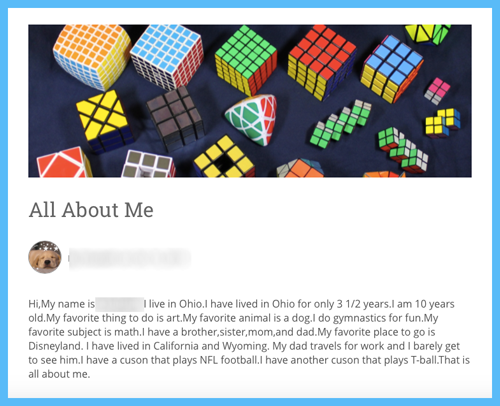 If we wanted comments to improve, Megan and I realized that we also needed to spend some time helping the students understand the intended message of the author. Students needed this knowledge in order to be thoughtful in their comments. We did this through shared reading and conversations about the texts and what the author was trying to say. One blog we spent some time reading was written by a car lover. As we read the post together, we posed the question, “Why do you think the writer wrote this post?” We got answers like,

“He’s mad at car makers because they spend millions of dollars on commercials and don’t help poor people.”

“He wants people to know about Mr. Robertson. He had to walk 21 miles to get to work.”

“Mr. Robertson is a role model for other people.”

“He admires Mr. Robertson and he thinks that people should do more to help others.”

We took this thinking to help us craft a response to Sky. Together, we crafted a comment that not only showed Sky that they understood his intended message but also allowed them to share their own thinking.

Dear Sky,
We agree that Mr. Robertson is a hero! We are glad that he was able to get a new car. There should be more people who can help others like Mr. Robertson. Thank you for sharing this story.

Megan and I reflected on what our students had learned. We wondered about what the children had needed to get going as responsible writers?

One very important responsibility that we had yet to teach was the responsibility to each other. The children needed to be very thoughtful about both their posts and their comments.Children say things to each other on a daily basis, that when placed in print on the Internet for others to read, can sound terrible. The children had no intention of being unkind in any way. They just didn’t think about how their words would sound before putting them in print, and then they didn’t reread and think about what their reader might hear. Tone is a tricky thing. Megan and I didn’t expect the children to be perfect in their tone, but we did expect them to be thoughtful.

The chart paper re-emerged and we read a post together, with the comments that followed. Megan and I took turns showing the children the various ways that the post and the comments could be read. Our goal was to raise awareness and make them more thoughtful. We talked about punctuation and how it can impact the way someone reads our writing. We also talked about how it is our responsibility to read the punctuation that the writer used so that we were more accurate in reading the tone.