The first time we gathered for writing workshop I explained what a writing workshop would look, feel and sound like. I wanted the students to understand that the structure of the workshop would be consistent. The workshop structure is the following: mini-lesson, independent write time, mid-workshop interruption, and share time. During independent writing time the students write and I conference with individuals or small groups. If something jumps out at me during a conference we stop for our mid-workshop interruption. I share some great things writers are doing and encourage others to try the strategy or craft and then everyone goes back to writing. Writing workshop ends with 3-5 students sharing their work and other students give the writer feedback. We discussed how the noise level would need to be fairly quiet so that everyone could think and focus on their writing pieces. I also discussed a few simple non-negotiables with the students: writing every day and student choice in topics.

I love to share past student writing samples so that they will understand writing workshop is a time to create different writing pieces using different genres. Some of the writing they can make can be a picture book, a poem, a letter, an article, a nonfiction book, a book review, etc. It helps the boys and girls to see different genres they can explore as writers. For the first few days of writing workshop students are paired with a partner so that they can discuss things they did over the summer, they can share happy or sad memories, they discuss their pets, they can tell stories about their family, or anything else they would like to share. I did think about my English Language Learners when pairing the students. Students who spent the summer back in their country could share their experiences together. I paired students who spoke either Spanish or Arabic together so they could share their ideas in English or in their native language. Everyone chose to discuss ideas in English. I walked around the classroom and listened while students shared. I discussed how the things they talked about can be turned into writing pieces. Once students had some possible ideas I sent them off to write so that I could make some observations and take notes about them as learners.

It was the end of our first week working together as writers and I felt overwhelmed as I reflected on how the week went. I was overwhelmed because I had to be really purposeful about my first steps or moves to get this group of learners started on the right path for our journey. I knew there were different paths that can be taken on a journey but usually there is a path that gets you there in a more efficient manner. I noticed that most students could only write for a few minutes at a time, so they needed to build more stamina. I also noticed choosing a topic to write about seemed to be challenging for them. As their writing teacher, I needed to think about how to get them to see themselves as writers and understand how writers work.

I pulled a few books off my shelf as tools to help my writers understand how ideas can be turned into something. I decided to use the book titled What Do You Do With An Idea? by Kobi Yamada. This book tells how one boy took a pressing idea and over time turned it into something amazing which helped change the world. I wanted my students to percolate their ideas and think about the possibilities those ideas could be and the impact their ideas would have on others. We discussed how writers get ideas from everywhere and they take those ideas and turn them into writing pieces. The students turned and talked about possible ideas and then we did a quick share out before I sent them off to write. At the end of writing workshop we always have a 10-12 minute share of our writing work. As students were sharing I wondered if they just came up with an idea because I asked them to, or did they choose an idea they really wanted to turn into a written piece to share with others?  Then I began to ponder how I would help them take more ownership of their writing work.

It seemed the next logical step was to share how I collect ideas. I started showing them my writer’s notebook and some of my planning pages using the document camera or Elmo. Then I shared a finished piece of my writing to see how one of those ideas turned into a rough draft. This was a great start but I also needed to find a way to bring published authors into our classroom so that they could get a better understanding of how different writers work. This gave me an idea to search Youtube for videos to use in my writing mini-lessons. I needed to find short clips and familiar authors to share with my students.  The videos would be more engaging visually because of the headlines,  the quick pace, and the background music. Videos also made it more accessible for every student to understand the message without having to think about reading levels. Hopefully, the students would notice every writing move has a purpose. I also wanted to use videos in my mini-lessons so that students would know how to gain information from a video and understand that videos are another way to share information with an audience.

I decided to start with the author Mo Willems because so many students know who he is as an author and have read lots of his books. My English Language Learners could easily read several of his books because there were speech bubbles identifying who was talking and Mo Willems’ illustrations helped students understand how a character was feeling in the story. Most of Mo Willems’ books only had two characters in the story and you could find those characters on every page. Each book had a problem which was solved by the end of the story. There were also lots of Youtube videos where my English Language Learners could listen to his stories if the book was too challenging to read independently. All the students enjoyed the humor in his books. Mo Willems was an author accessible to all my students as readers and writers.

I found a video (Mo Willems on Writing Books Interview) where Mo is discussing how he thinks about the character for a while and thinks about how that particular character would handle certain situations. I wanted students to understand that when writers get inspired it could be because of a special memory, a character, a topic, an environmental issue, etc. I told the students we were going to watch a Youtube video where Mo Willems talks a little bit about how he writes books. All the students were excited and eager to see how Mo Willems works as a writer. We watched the video and the students shared out what they had learned from Mo Willems. Here is what we learned from Mo Willlems’ video: writers sketch and think about lots of characters, writers think a long time about what a character is like, writers share their writing with others to get feedback, and writers read to get ideas from other writers. At the end of the video Mo Willems shares why it is important to read and he invites viewers to read some of his books and start drawing some of his characters. He says that you might even create a book that he would want to read.

Kaylinn took Mo’s writing advice and started to think about how to develop a story based on a character in her writing notebook.  She used the Pigeon from Mo Willem’s stories because she had a solid understanding of what this character was like. Kaylinn played around with possible story ideas in her writer’s notebook. In her Pigeon Wants to Play Softball Kaylinn included Piggie and Elephant who are other characters created by Mo Willems. During share time Kaylinn shared her ideas from her writer’s notebook. Hopefully, she would spark other writers to think about a character and how to develop a story based on what the character was like. Students could develop their own character or use a character they were familiar with from a book. I pointed out that Kaylinn’s reading life was also impacting her writing life. If she wouldn’t have read so many Pigeon books than she would not have been able to envision her own Pigeon story versions. I knew that showing a video helped us envision new possibilities in the work we were already doing in writing workshop. We would need to continue to share the different ways students gathered ideas as a writing community during our mini-lessons, mid-workshop interruptions and share time.

As I mentioned earlier, students were also having trouble getting their ideas down quickly on paper in writing workshop.  My students who spoke English as as second language needed time to share their stories orally before putting their thoughts in writing. English Language Learners need daily opportunities to learn and practice English so they can develop their literacy skills. However, some of my non English Language Learners could also benefit by sharing ideas orally before writing down their thoughts. I decided to show the Youtube video of Robert Munsch sharing his writing process (Meet Robert Munsch). Robert Munsch started his writing career by telling his stories to children at a daycare. The children were his audience and the feedback the children gave him helped him revise his stories before he put them in writing. Students needed to understand that writing is a process. As writers write they get feedback and revise along the way and don’t wait until they finish a writing piece. After the video we talked about how sharing ideas orally with another writer could help develop ideas into writing pieces. As writers share their ideas they make changes either orally or they can make revisions on paper. The children decided if they wanted to spend the first five minutes talking with another writer or if they wanted to get to work. Students who were in the middle of a writing piece wanted to work and students who were ready to begin a new piece wanted to share ideas with a partner.

At share time students who orally talked about their ideas said it helped them as writers either to develop an idea or figure out what to write about.

As the year went on we discussed different reasons why writers need to orally discuss or get feedback on their writing pieces.  It became a regular part of our routine for students to choose if they wanted to start their writing time by talking or writing. Some writers wanted to write first and then share their work with another writer. Some writers wanted to create a writing piece together. Three of my English Language Learners wanted to work together on a poem towards the end of the year.  All three of these students needed to discuss their work orally and then write. The students loved soccer so they chose to write their poem about this topic. I was amazed at how they discussed and thought about whitespace, line breaks, and repetition. Each English Language Learner published the poem on their blogs. Here is Abdallah’s published poem: 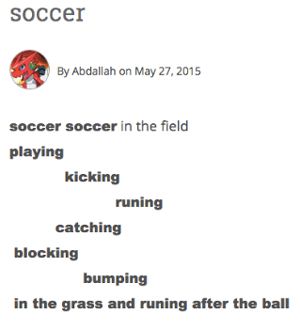 Sharing, talking and reflecting became a way all of us started to work as writers in the room.