Ch. 3: Introducing the Other Hallucinogens 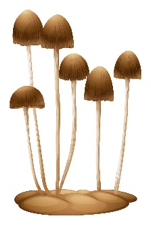 This chapter is all about hallucinogenic substances (hallucinogens) and includes discussion of several dissociative substances, as well. The content addresses some naturally occurring substances (psilocybin mushrooms, peyote, salvia divonorum) and others that are synthesized , like LSD, PCP, ketamine, Ecstasy/MDMA, dextromethorphan (yes, the substance in many forms of cough medicine). Some textbooks refer to many of these substances as “club drugs” because they tend to be used in night club, rave, dance, concert, and party settings. You have already learned a bit about two other “club drug” substances, GHB and Rohypnol (in our Module 9 discussions about sedative hypnotics). These are sometimes referred to as “designer drugs,” as well, because of the effort involved in synthesizing them (illegally).

Hallucinogenic substances are most likely to be used by individuals in the emerging adulthood age group, 18-25 years. Here is a figure based on data from the 2015 NSDUH study (see Figure 1). Overall, about ½ of one percent (0.5%) of individuals aged 12 and over reported use of hallucinogens during the past month.

Figure 1. Past month hallucinogen use by age group (percentage)* 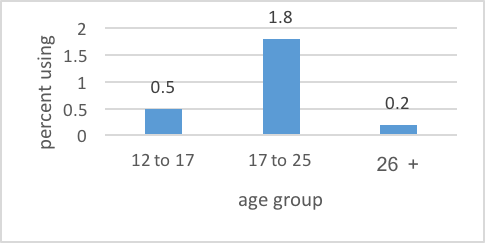 The main reading content comes from the National Institute on Drug Abuse (2015), Hallucinogens and dissociative drugs, from the NIDA Research Report Series. In this chapter you will read about:

One other important principle that is briefly described in this reading, but not identified as such: cross-tolerance. The reading indicates that a person who develops tolerance to one of the hallucinogenic substances automatically has developed at least some tolerance to related substances. The example presented in the reading concerns tolerance to LSD producing tolerance to psilocybin and peyote. The principle of cross-tolerance is important in terms of understanding how medications might or might not work for a person, as well as how various types of substances work (not just hallucinogens). 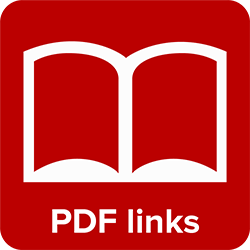 Click here for a link to our Carmen course where you can locate the assigned pdf file(s) for this chapter. You will need to be logged into our Carmen course, select Module 12, and proceed to the Coursework area. Under the Readings heading you will find a box with links to the readings for relevant coursebook chapters. Don’t forget to return here in your coursebook to complete the remaining chapters and interactive activities.

Ch. 3: Introducing the Other Hallucinogens by Audrey Begun is licensed under a Creative Commons Attribution-NonCommercial-NoDerivatives 4.0 International License, except where otherwise noted.