Figure 1 shows the layout of what happens when brain neurons in close physical proximity to each interact or communicate. It makes sense to consider this microscopic level because these are the building blocks of the brain regions that play a role in how substance use can become a substance use disorder. The neurotransmitters that you have been reading about are contained in packets called vesicles, located in the terminal area of a neuron’s axon—the area that comes into close contact with the neighboring neurons. The space between the neurons is the synapse, or synaptic cleft. And this space between neurons is where those neurotransmitters are released to work their changes on their neighboring neurons. The “sending” neuron is the presynaptic neuron, while the receiving neuron is the postsynaptic neuron. 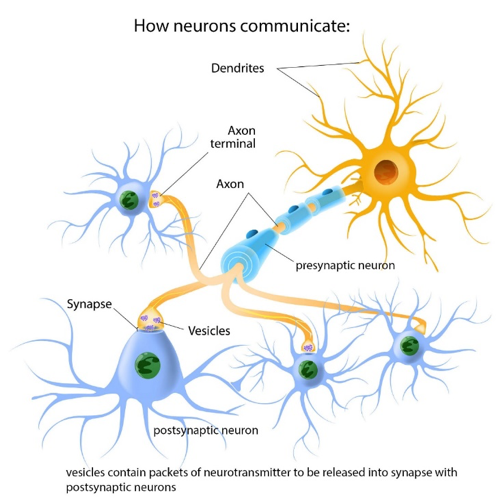 Several neurotransmitters are known to play a role in the development, maintenance, and recovery from alcohol or other substance use disorders, as well as other forms of addiction. These include:

Several things are very important to understand about neurotransmitters and the system of communication in which they are involved:

At this point, you have developed a basic understanding of how neurotransmitters play a role in substance use, and have come to recognize the names of some of the key players. Let’s take a brief look at the other side of the coin: how neurotransmitters play a role in the experience of withdrawal from certain substances and why this might make a difference in keeping a person motivated to maintain a “quit” attempt after developing a substance use disorder. Here, we can draw from content presented in articles published by Koob and Simon (2009) and Trevisan et al (1998). They tell us that:

Why does this matter? Because these negative emotional and psychological states make it difficult to sustain one’s motivation to avoid taking drugs and contribute to the pressure a person might feel to relapse back to using again. And, depending on the nature of the substances involved, withdrawal may lead to decreased dopamine, serotonin, or GABA, as well as increased norepinephrine or glutamate. Knowing about these links between neurotransmitter changes during prolonged withdrawal from using a substance has contributed to the development of several medications to help manage these negative experiences; this, in turn, may help a person to sustain a quit attempt over time. (We will learn more about these medications in Module 13 when we study pharmacotherapy strategies.) Another reason why all of this matters: it helps us to understand the biology behind the frequently reported observation that, during withdrawal and early recovery from many types of substances, the risk for suicide is greater than in the general population.

See if you can complete this picture laying out how neurons in the brain interact and communicate–refer back to Figure 1 above for the answers.

Ch. 4: More about Neurotransmitters and How Neurons Communicate by Audrey Begun is licensed under a Creative Commons Attribution-NonCommercial-NoDerivatives 4.0 International License, except where otherwise noted.