Chromosome number, or ploidy, is an important concept in regards to cell replication and division. Somatic cells, which are most cells in the body, are diploid, meaning that the cell doubles its chromosome number to 4N during mitosis before dividing and the resulting daughter cells are 2N. Germ cells (sperm and egg) are haploid, meaning that during meiosis, the chromosome number doubles to 4N, then divides into 2N, and divides again into 1N. N is the number of chromosome types in the animal. The stages of mitosis and meiosis will be discussed later.

Karyotype is the arrangement of chromosomes based on size and morphology and is dependent on centromere location. The centromere is the most condensed and constricted region of the chromosome that connects two chromatids together. The microtubule spindle fibers connect to the centromere to pull apart chromatids during cell division. Karyotypes are specific for each species and can aid in identifying chromosomal abnormalities that may lead to disease in the animal.

Cells in G1 (G is for “gap”) are rapidly synthesizing RNA and protein, enlarging their nuclei and cytoplasm from the last cell division. DNA replication (synthesis) occurs in the S period. The cell will double its DNA in an exact copy in about 7 hours. Interestingly, not all DNA is replicated at once, but in a cell-specific sequence (to preserve ploidy, chromosome number goes from 2n to 4n, then will be reduced to 2n again at M). A second gap (G2) takes place that is another checkpoint prior to M. Cells with polytene chromosomes and polyploid cells (e.g. mammalian liver cells) remain in this period indefinitely. G2 is about an hour in rapidly renewing tissues.

Mitosis, or the process of cellular division, can be divided into four distinct phases, each with specific changing cellular structures.

Prophase is the first phase and involves breakdown of the nuclear envelope, disappearance of the nucleus, and condensation of chromatin. Chromatin coils, supercoils, and makes loops to become a chromosome. Separate copies of genome become visually segregated into two sister chromatids, remaining attached to each other by a protein called cohesin at the centromere (specific DNA sequence). As discussed previously, the inner nuclear envelope is surrounded by lamin. The lamin disintegrates when it receives signaling from mitosis promoting factors. The envelope then is contained in numerous vesicles, which is retracted into mitotic ER until two new cells are formed.

After disintegration of the nuclear envelope, the cell is in metaphase. During this phase the completely condensed chromosomes (each pair of sister chromatids) align themselves in a plane normal to a line joining the two pairs of centrioles. This plane is called metaphase plate. Some microtubules of spindle are inserted to the kinetochore (the disk-like protein attached to the centromere of chromosomes), others (continuous fibers) stretch from pole to pole, avoiding the chromosomes. Still a third class of microtubules, which originate at the centrioles, radiate away from the metaphase plate and the chromosomes, forming the aster. Note that the homologous chromosomes (chromosome pairs that each inherited from maternal and paternal sources) act independently in mitosis. Each is doubled into two sister chromatids, each will divide and be represented in the daughter cells.

Eventually, each chromatid is separated from its sister during anaphase. The centromeres holding the sister chromatids split in half, and each chromatid, now called a daughter chromosome moves in opposite directions to the asters. The splitting to the entire genetic message into two equal halves has been accomplished (karyokinesis: the dividing of the nucleus).

The process of uncoiling all chromosomes and reforming nuclear envelopes comprises the final stage, telophase. At this time, the nucleoli reform and the cytoplasm divides (cytokinesis), aided by a sub-plasma membrane purse-string of actin and myosin filaments, the contractile ring (creates cleavage furrow).  Once two distinct cells are formed, the nuclear envelope reassembles. Membrane from the ER is used to form the envelope, with scaffolding from lamin forming the inner fibrous layer. The chromosomes in the resulting cells tend to be identical to the cell from which they originated.

Conversely, meiosis is a process designed to result in genetic variation. This variation occurs through both homologous recombination and random segregation of the chromatin. Meiosis is the process in which germ cells (sperm and egg) are formed. Therefore, having genetically distinct cells compared to the parent cell ensures that there will be genetic diversity in offspring. Also, germ cells have N number of chromosomes due to the second cell division that occurs during meiosis. When the sperm fertilizes the egg, the resulting cells in the offspring will have 2N number of chromosomes.

During meiosis, the ploidy is reduced from diploid (2n) to haploid (1n) in production of eggs and sperm. With the successful union of egg and sperm, the normal diploid (2n) complement of chromosomes is restored. To achieve this reduction in ploidy, the chromosome number is first doubled, as in mitosis, but then divided twice, so that there are four haploid daughter gametes from one diploid parent cell. Meiotic prophase is complex. What is important is that the homologous chromosomes do not act independently, but pair together (synapsis) in complex patterns. The sites in pairing between two homologous chromosomes is called synaptonemal complexes. In addition, chiasma (specific points where two duplicated homologous – maternal and paternal – chromosomes are physically connected) can form in two chromatids, one from each of the homologous chromosomes, where actual exchange of chromosome segment takes place. These structures allow recombination and crossing over to occur, the exchange and mixing of genetic information between maternal and paternal genes. 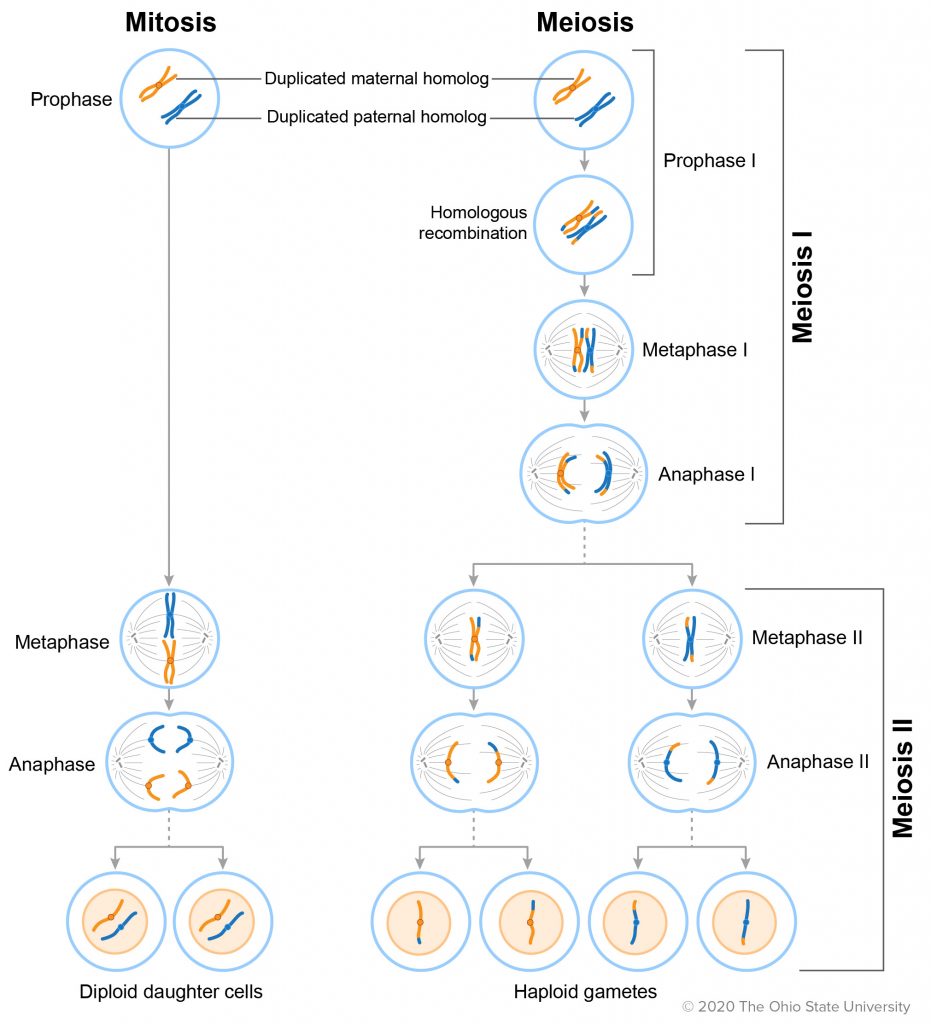