Bone is primarily composed of extracellular matrix, with organic and inorganic components. The organic component is largely Type I collagen and ground substance (collectively this is called osteoid). Non collagenous proteins that contribute to osteoid include growth factors, ‘glues’, and proteins that help to initiate mineralization. The inorganic matrix is calcium hydroxyapatite (this also contains phosphorus), which adds rigidity. Due to this rigidity, bone can only undergo appositional growth (layers on top of each other), not interstitial growth (growth from within the matrix). Routine histologic sections of bone are generally demineralized, and mineral content becomes impossible to evaluate.

The arrangement of collagen fibers in bone can be visualized under a polarizing microscope. Where fibers are arranged into dense parallel arrays, the bone is referred to as ‘lamellar’. All normal bone in an adult animal is lamellar. In the cortex, there are outer (periosteal) circumferential lamellae and inner (endosteal) lamellae. Rapidly deposited osteoid (such as occurs during growth and injury) has randomly arranged collagen fibers and is referred to as ‘woven’.

Osteoblasts are mesenchymal cells that contribute to bone production in two phases. First, they synthesize and secrete a layer of organic materials (primarily tropocollagen) called the osteoid seam. Secondly, osteoblasts contribute to mineralization of the osteoid seam (at which point the matrix becomes bone). Osteoblasts are plump, angular cells that can be seen lining bone surfaces. With time, osteoblasts become embedded within bone and become osteocytes.

Osteocytes are smaller and elongate, and are contained within small cavities called lacunae. They have long cytoplasmic process that run within canaliculi, connecting to other osteocytes (these cell processes are very hard to identify in routine histologic sections). Changes in interstitial fluid movement and electric potential (piezoelectric forces) can be detected by the osteocytes, which can then transmit a signal to osteoblasts. By this mechanism, osteocytes play an important role in detecting local changes in the microenvironment (stress, microfractures, micronutrients) and co-ordinating adaptive responses.  Osteocytes may also play a role in day to day calcium homeostasis by ‘fine-tuning’ the amount of calcium that is released/removed from the circulating calcium pool.

In a section of long bone, bone can anatomically be divided into compact bone and trabecular (also called cancellous or spongy) bone. Compact bone is the dense bone that forms the cortex. Trabecular bone forms multi-directional, anastomosing struts within the marrow cavity, and are interspersed by adipose and hematopoietic tissue. The arrangement of trabecular bone generally reflects loading patterns on the bone.

Osteoclasts are hematopoietic derived, multinucleated cells that resorb bone. Physiologic stimuli that induce osteoclastic resorption generally operate through the osteoblast (the osteoblast secretes a molecule called ODF that binds RANK on osteoclasts, causing osteoclast activation). The osteoblast initially releases collagenases that resorb the non-mineralized lamina limitans. The peripheral margin of the osteoclast can then bind to the exposed mineralized bone, forming a tight seal. Carbonic acid secreted across a brush border of the osteoclast resorbs the mineral and the matrix is dissolved by secreted proteinases. A Howship’s lacuna is the scalloped cavity left after an osteoclast resorbs a segment of bone. 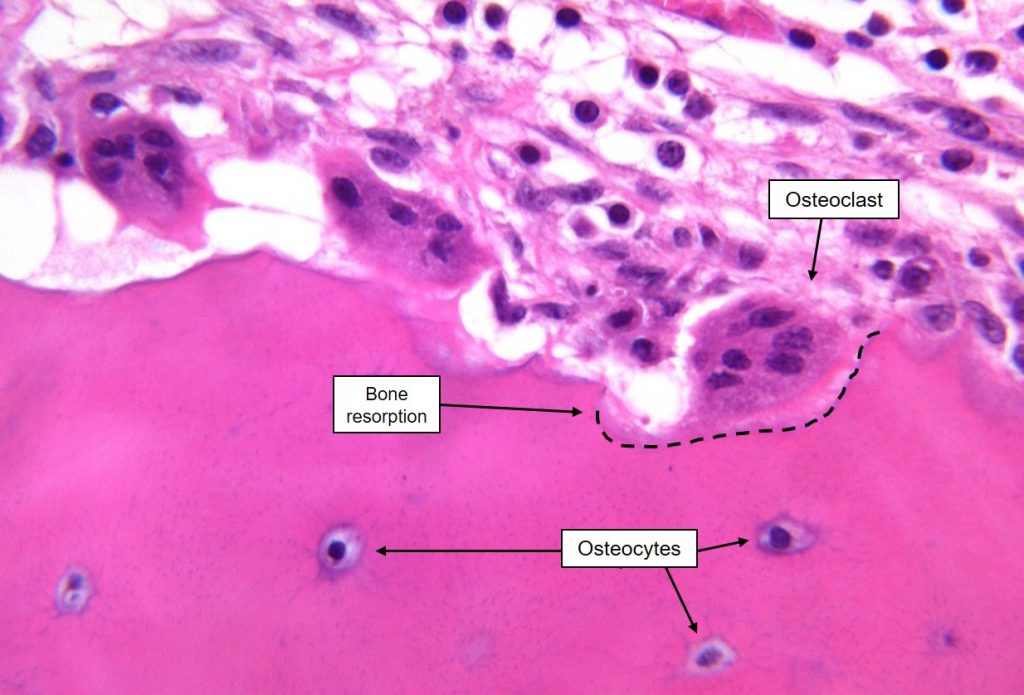 Osteons are the functional unit of bone. They can be compared to reinforcing rods embedded in concrete. An osteon is a long, cylindrical structure with a central osteonal canal (also called Haversian canal) containing nerves, blood vessels and osteogenic cells. This central canal is surrounded by densely arranged concentric lamellae of bone, that are approximately 2-3µm apart. Primary osteons initially form at the periosteal surface. Secondary osteons form after primary osteons. To form, secondary osteons must have a pre-existing tunnel allowing osteoclasts to enlarge the tunnel. Osteoblasts then lay down bone in a centripetal direction, thus forming a secondary osteon. The reversal line marks the point at which osteoclasis stops and osteogenesis begins. Interstitial bone can be seen between osteons, and represents remnants of primary/secondary osteons and the circumferential lamellae. 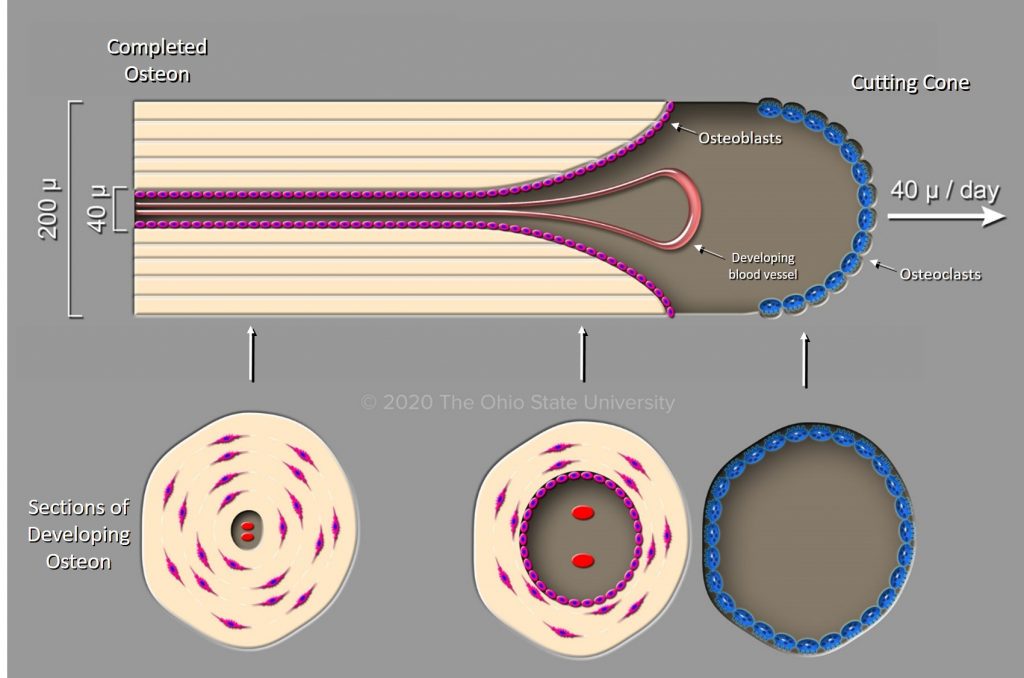