Microfilaments are named this due to being the smallest filament structure of the cytoskeleton, usually around 6 nm in diameter. One microfilament is actin filament or F-actin, which is composed of actin monomers polymerized into a double-stranded helix. While not a microfilament per se, myosins are a family of proteins that interact with actin to perform various motor activities within the cell. Myosins contain three domains. The head domain binds actin and hydrolyzes ATP to generate movement, the neck domain can bend to accommodate the movement of the molecules, and the tail domain can bind other molecules for transport. Actin and myosin are highly involved in cell motility, organelle and vesicular transport, and muscle contraction as they are the main components of the sarcomere in muscles. A specialized function of an actin and myosin compound is the contractile ring formed during telophase of cell division, during which actin and myosin line up in the middle of the cell to divide the cytoplasm (cytokinesis) into two daughter cells.

Several intermediate filaments are found within cells, with sizes around 10 nm in diameter. Some examples of intermediate filaments include keratin, vimentin, desmin, and lamin. Keratin is formed from monomers that combine into bundles, giving it an impermeable quality. Due to its toughness, it functions to protect epithelial cells from damage, with one of its main locations in the body being the outer layer of skin. Vimentin is also formed from monomers that interact to form a helical structure. This filament attaches to several organelles in the cell to anchor them into position. It also has a highly flexible nature, which suggests that it is responsible for cellular integrity and shape. Like the other intermediate filaments, desmin has a helical structure that allows it to interact with other molecules. However, desmin is typically not found in all cell types, instead being localized to cells that make up smooth, skeletal, and cardiac muscle. Therefore, it plays a role in muscle contraction. As discussed previously, lamin is found on the inner surface of the inner nuclear envelope and makes up the fibrous lamina in the nucleus. It is also a helical filament that is involved in nuclear pore formation and ensuring proper disassembling and reassembling of the nuclear envelope during and after mitosis. Lamins are also a target during apoptosis.

The final type of filament that makes up the cytoskeleton is the microtubule. Around 25 nm in diameter, it is composed of an α and β heterodimer of tubulin that polymerize end-to-end to form protofilaments. Each tubulin dimer normally  binds one nonexchangeable molecule of GDP and one exchangeable molecule of GTP. In addition, each dimer has binding sites for the drugs colchicine (used in the treatment of gout) and vinblastine (used in cancer chemotherapy). The microtubule makes up different structures depending on the number and organization of protofilaments. For example, central pair and 9 outer doublet microtubules (9+2 arrangement) are the main structural units (axoneme) of flagella and cilia. They also interact with the ATPase dynein and ATP resulting in transduction of chemical energy and the sliding of outer doublets relative to each other. This results in the bending movements of the organelles. In many asymmetrical cells, microtubules are positioned in a way that stiffens or supports the cytoplasm, e.g., long spike-like pseudopods of some protozoa; axons and dendrites of nerve cells; elongating embryonic cells. Microtubules are also involved in the mitotic apparatus during cell division and the directed transport of organelles and molecules along a nerve cell axon (axoplasmic flow).

The centriole is a nonmembrane organelle which exists in pairs in each cell. Each centriole measures 0.15 x 3-5 μm and is a hollow cylinder closed at one end. The walls of the cylinder are composed of nine sets of triplet microtubules, each tubule similar in dimension to a microtubule (250 Å in diameter). The pair of centrioles usually lie near the Golgi apparatus in resting cells, but they divide and play a role in establishing cell polarity and the spindle during cell division (but no direct contact of spindle fibers with centrioles). 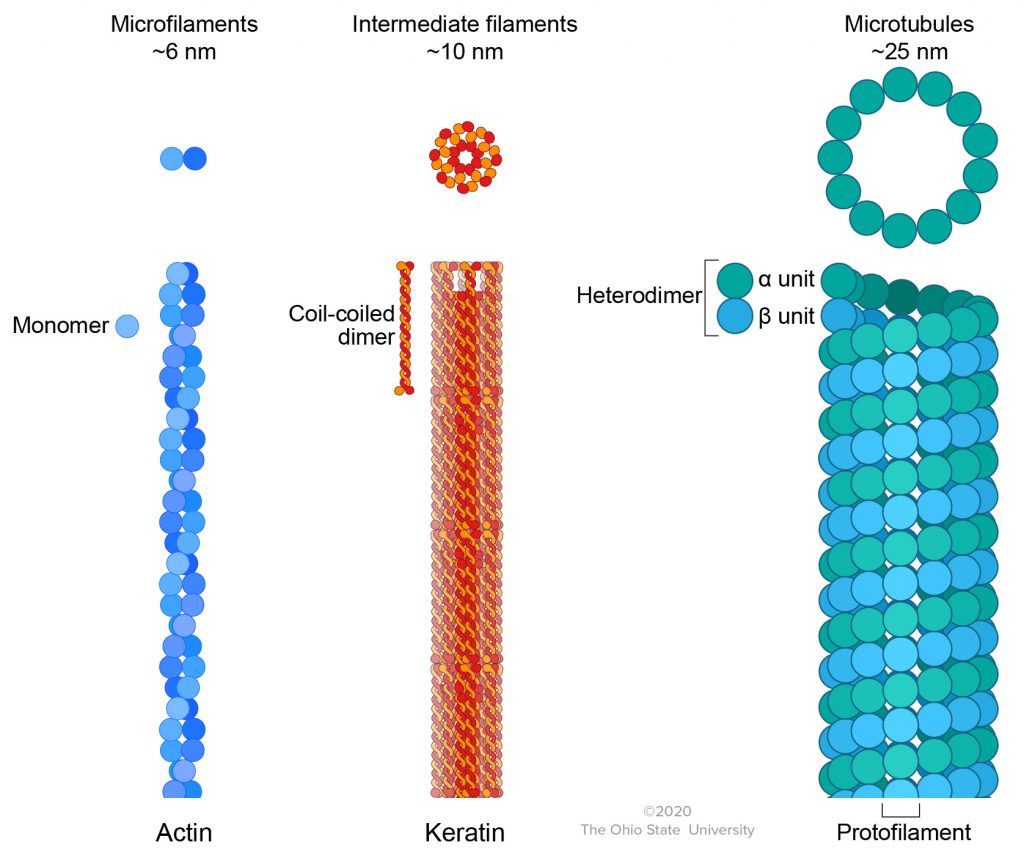