Mitochondria have a complex structure related to their sophisticated function in the cell and is the primary organelle that produces energy (ATP) for the cell. The number of mitochondria within a cell varies depending on the energy needs of the cell. For example, a muscle cell will have a high number of mitochondria due to its high demand for energy. The mitochondria is composed of an outer and an inner membrane. The outer membrane is composed of a 50:50 lipid:protein mixture, porins, and numerous enzymes. Porins are proteins that create pores within the membrane, allowing it to be permeable to molecules up to a certain size. Between the outer and inner membrane, and intermembrane space contains enzymes that are necessary for nucleoside phosphate exchange. The inner membrane is highly specialized and impermeable to most molecules that, in turn, is involved in the mechanism of oxidative phosphorylation by allowing ionic charge separation across this membrane (Mitchell hypothesis). Therefore, specific carriers are needed for the entry and exit of most metabolites. 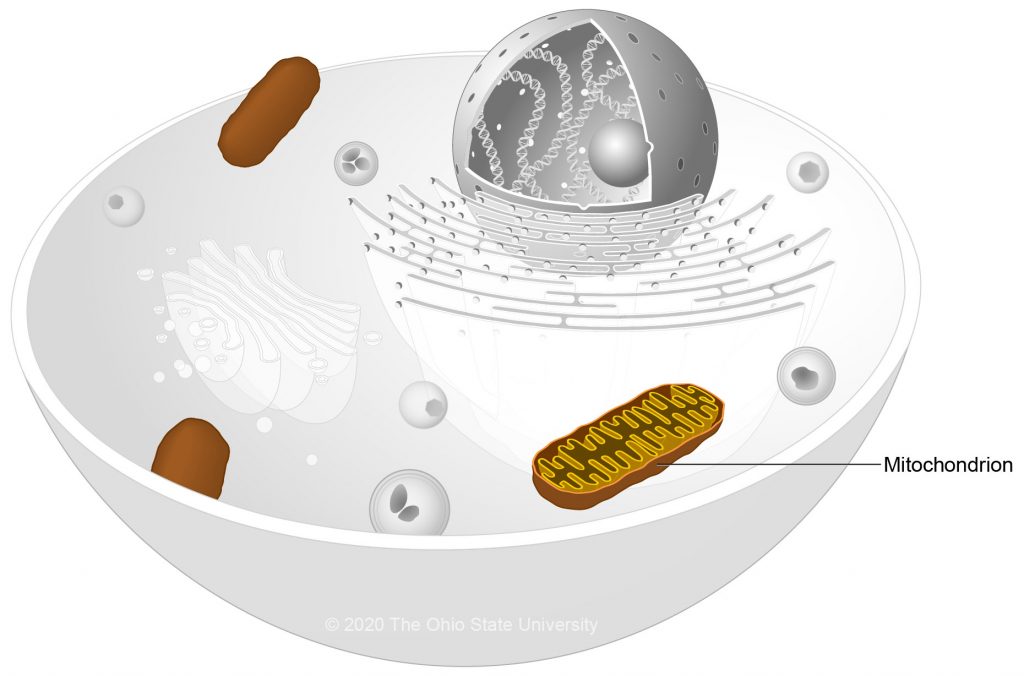 The inner membrane has a 20:80 lipid:protein ratio and contains the enzymes involved in the respiratory electron transport chain and phosphorylation of ADP. Therefore, the inner membrane is the primary site of ATP synthesis. Cristae are projections of the inner membrane into the mitochondrial matrix; the number of cristae present is directly related to the amount of ATP synthesized. The enzyme ATPase is attached to the matrix surface of cristae and directly couples the electron transport chain to ADP phosphorylation. Other molecules attached to the cristae include cytochrome C on the outer surface, which has a role in the electron transport chain and apoptosis, and succinic dehydrogenase on the matrix surface. Within the mitochondrial matrix are enzymes involved in metabolism of nucleic acids, lipid synthesis, protein synthesis, and the Kreb’s Cycle. Mitochondria also play an important role in the regulation of programmed cell death (apoptosis). 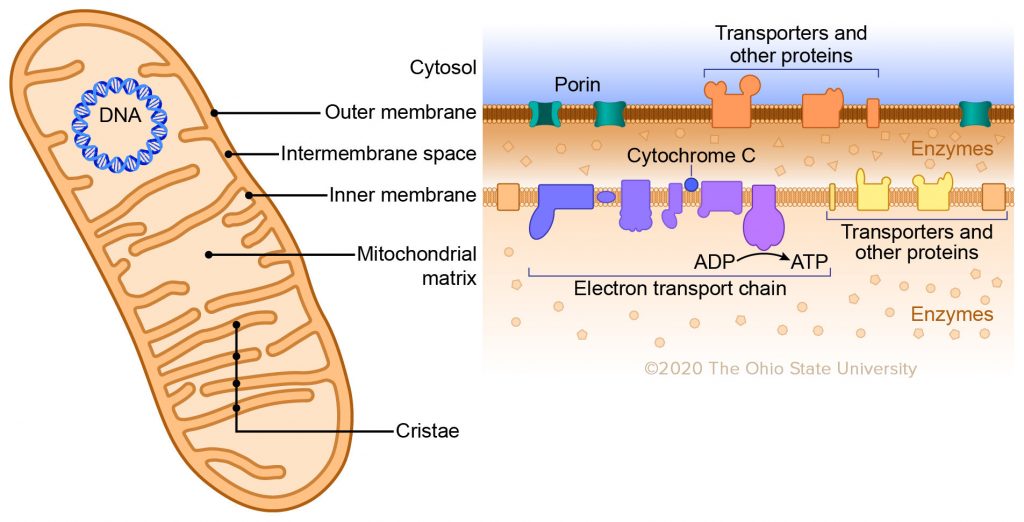 Mitochondria contain genetic material that is inherited from the mother and is found in the mitochondrial matrix as a circular double stranded molecule. However, only mitochondrial RNAs and a small number of inner membrane proteins are translated and transcribed from this DNA. Most mitochondrial proteins are translated and transcribed from nuclear genes. Therefore, they are synthesized in the cytoplasm of the cell and imported through membrane protein translocase complexes across the outer and/or inner membranes into the mitochondria. The presence of DNA in mitochondria provides evidence for how mitochondria may have developed in the cell, a process called mitochondrial biogenesis. It is theorized that mitochondria are derived from aerobic endosymbiotic bacteria, meaning bacteria that entered and remained to provide a benefit to the host cell. Another piece of evidence to support this theory is that mitochondria divide through a process called binary fission, similar to bacteria.