Rough endoplasmic reticulum (rER) is composed of a membrane (ER) that is a continuation of the nuclear envelope and ribosomes. RER is arranged in a sheet-like pattern and functions to synthesize membrane and secretory proteins. Ribosomes can also be free within the cell to synthesize cytoplasmic proteins. They are composed of protein subunit structures that aid in the conversion of an mRNA sequence into an amino acid sequence, thereby producing a polypeptide chain that will fold into a three-dimensional protein.  Ribosomes are composed of two asymmetric pieces: large (60S) and small (40S) subunits. The large (60S) subunit is made of three pieces of RNA (28S, 5.8S and 5S) comprising 65% of subunit, and many other proteins, comprising 35%. The small (40S) subunit made of one piece of RNA (18S) and many other proteins. The specificity of protein-RNA interactions is so high that a test tube filled with the right RNA and proteins will self-assemble into a ribosome. Ribosome, mRNA, tRNA, and enzymes may associate free in cytoplasm and make proteins. Cells use this format when synthesizing cytoplasmic proteins.

In contrast, smooth endoplasmic reticulum (sER) is both structurally and functionally different than rER. Firstly, sER does not contain ribosomes and, therefore, is not involved in protein synthesis. Within the cell, sER appear as tubules that can either be parallel, similar to rER, or as tangles or a “lace-like” pattern. The sER has several important functions throughout the body. In the endocrine system, this organelle is involved in the biosynthesis of steroids, including testosterone and estrogens, from cholesterol. In the liver, it is highly involved in detoxification of drugs from the body. A third function of the sER is its relationship to the contraction of smooth and striated muscle. In muscle, the sER has the specific name of sarcoplasmic reticulum, which stores intracellular calcium ions. Release and sequestration of calcium ions has a direct effect on muscle contraction and relaxation, which will be covered in greater detail in in the muscle chapter. 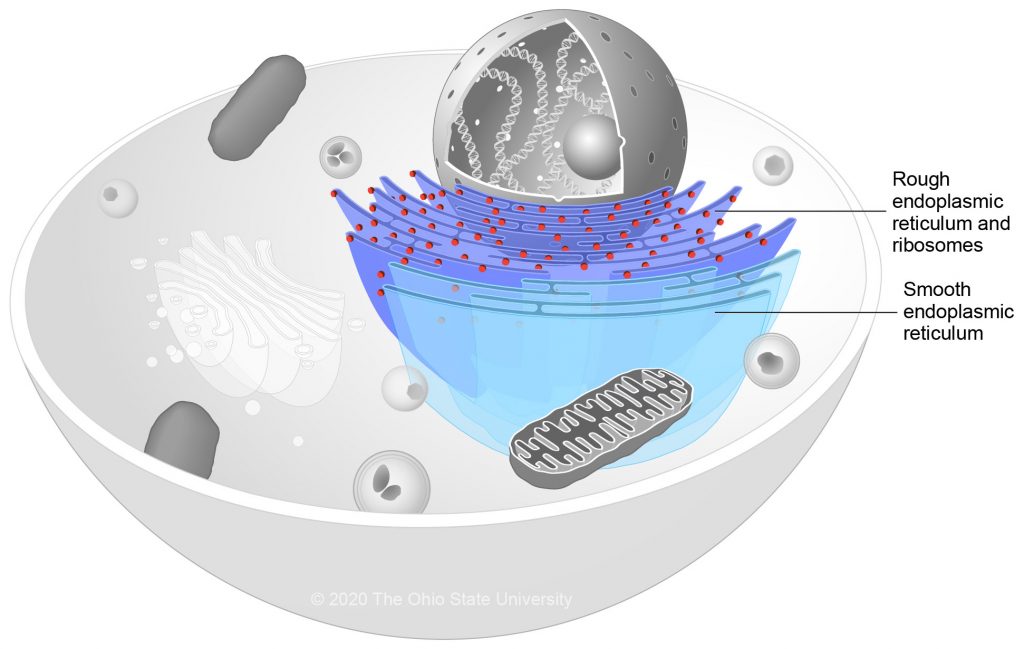