The ovaries function 1.) to produce ova, 2.) as an endocrine gland (i.e. secrete mediators into the bloodstream to act at a distant site). During ovarian development from the primordial gonad, structures termed sex cords form which are likely derived from mesothelial cells forming the gonads. These linear plates of tissue incorporate the migrating germ cells into their structure.

Oogenesis refers to the development of oocytes within the ovary. The process can be divided into three stages – fetal, prepuberty (resting stage) and puberty.

During fetal oogenesis, the sex cords break down and the germ cells undergo enhanced mitosis. In most mammals, this prolonged mitotic activity ceases before or soon after birth. These cells arrest in prophase of meiosis I (primary oocytes), are enclosed in basal lamina surrounded by follicular cells and are referred to as primordial follicles.

The following concepts must be understood regarding oogonia and oocytes in relationship to the prepubertal, pubertal and post pubertal periods. 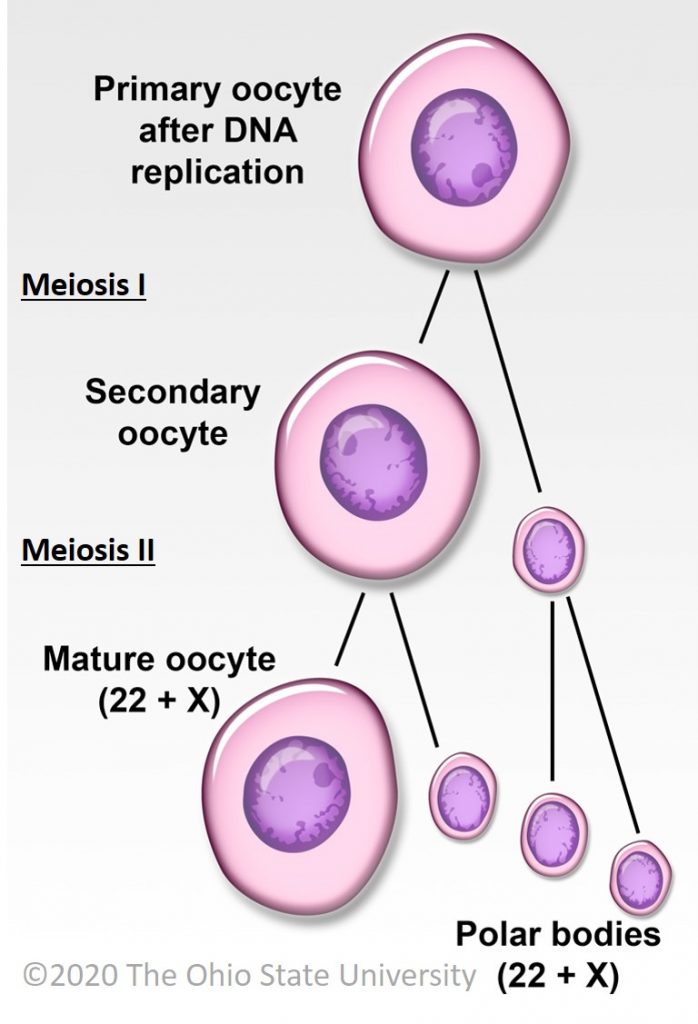 The ovary is divided anatomically into the cortex and medulla. The cortical aspect of the ovary is covered by cuboidal epithelium during development that converts to squamous epithelium with age. The cortical parenchyma is composed of follicles (oocytes and follicular cells), interstitial cells and collagenous connective tissue stroma. The ovarian medulla contains large arteries and veins, lymphatics, nerves embedded in a loose collagenous matrix. The rete ovarii are also present in the medulla, which are cords of cells found in the medulla homologous to the rete testis.

In most domestic species, the cortex contains the developing follicles. However in the horse, the anatomy of the ovary is reversed. In this species, the follicular development takes place in the region of the ovary corresponding to the medulla. A concavity forms in the ovary called the ovulation fossa, corresponding to the site in the equine ovary which ovulation occurs. In addition, ovaries in the equine fetus and neonates are markedly enlarged compared to the size of the animal. This enlargement in attributed primarily to hyperplasia and hypertrophy of the interstitial cells. Subsequent atrophy takes place post-natally. 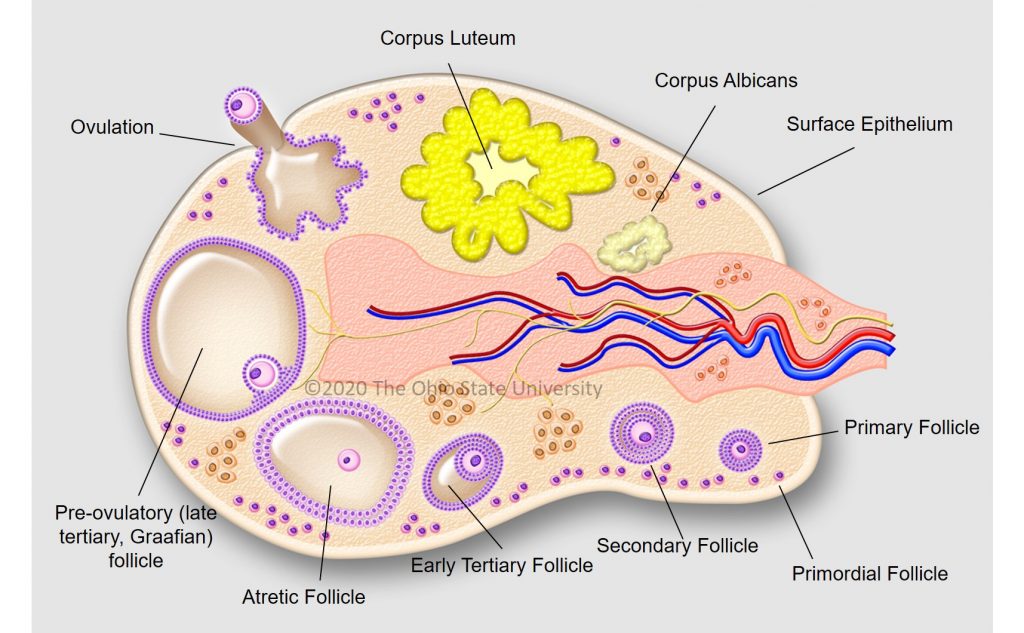 Development of the ovarian follicle is a sequential process which is primarily directed by the influence of gonadotrophins (follicle stimulating hormone [FSH] and luteinizing hormone [LH]) and can be variable between species.

A follicle only has two potential fates, atresia or ovulation. Follicular atresia or degeneration of the developing follicle can take place any time during development. During this process the oocyte liquefies with subsequent collapse of the zona pellucida and the wall of the follicle. Fibrous tissue, phagocytes and vascular tissue replace the region of the atretic follicle while the remnants of the theca interna undergo hypertrophy. Ovulation involves the rupture of the follicle and release of the oocyte. This is induced by a surge of luteinizing hormone released by the anterior pituitary. Only the corona radiata is present on the oocyte after release from the follicle.

The corpus hemorrhagicum is formed soon after ovulation from hemorrhage into the remnants of the follicular structure resulting in a large blood clot. The remaining granulosa cells and cells of the theca interna undergo hypertrophy, proliferate and invade the corpus hemorrhagicum, transforming into granulosa lutein cells and theca lutein cells respectively (luteinization). These cells organize into a highly vascular glandular organ called the corpus luteum (yellow body). The yellow color of this structure is imparted by intracellular accumulations of a pigment, lutein, in some species (equine, bovine, canine and feline). In ewes and sows, other lipid pigments impart the yellow color. If fertilization successfully takes place, the corpus luteum will be maintained. However, if fertilization does not take place, the corpus luteum will degenerate and be replaced by fibrous connective tissue forming the corpus albicans. The corpus luteum is the main source of progesterone, which is important for the maintenance of pregnancy and synergistic with estrogen during estrus.