The nucleus contains and confines the genetic material of a eukaryotic cell. Prokaryotic cells do not have a defined nucleus, but rather have genetic material within the cytoplasm. The nuclear envelope is the cellular component that surrounds and defines the nucleus. This structure is composed of two membranes that are continuous with the rough endoplasmic reticulum that will be further discussed later in this chapter. Within the nuclear envelope are nuclear pores, donut-shaped symmetric ring structures that allows selective transport of materials such as RNA or proteins, lipids, and carbohydrates into or out of the nucleus. However, a nuclear localization sequence is necessary before transport can occur. The fibrous lamina is the third component of the nuclear envelope. The fibrous lamina is composed of lamin and membrane-associated proteins and is found on the inner surface of the inner nuclear envelope. This component is responsible for overall nuclear stability and organizing nuclear events such as DNA replication and mitosis. 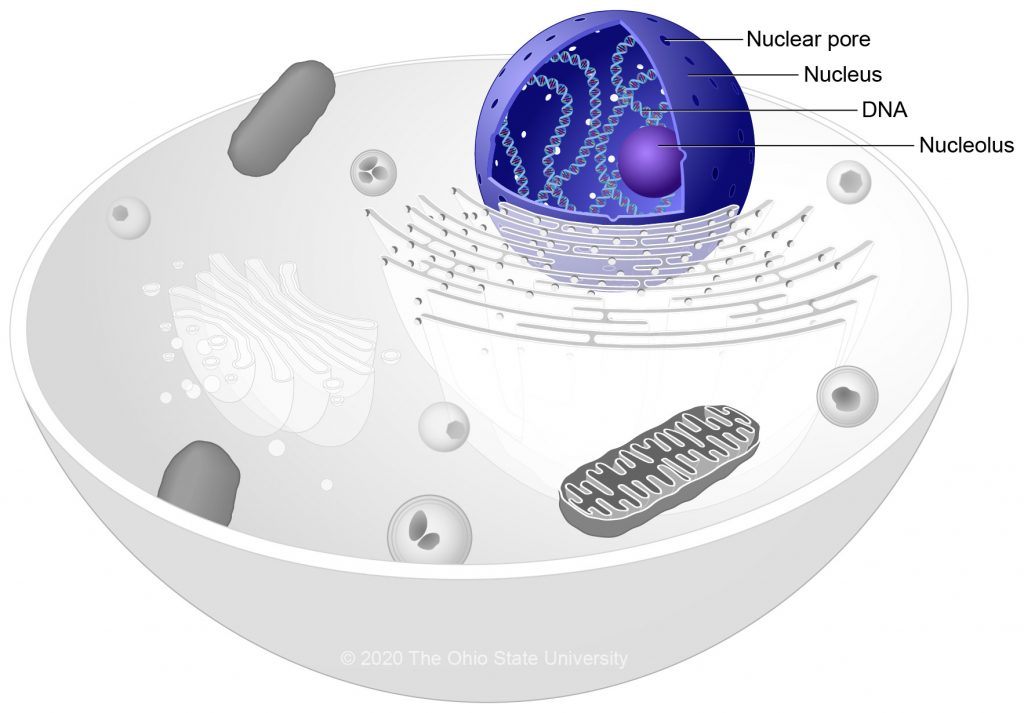 Within the nucleus, DNA and histones are packaged into either euchromatin or heterochromatin. Euchromatin is loosely packed DNA, enabling genetic transcription to occur. Heterochromatin is densely packed DNA, which is inactivated and prevents transcription from occurring. Heterochromatin appears more basophilic than euchromatin with standard hematoxylin and eosin staining. A specific organelle within the nucleus is the nucleolus. A cell can contain one or several nucleoli, depending on its activity. The nucleolus synthesizes ribosomal RNA, which is further assembled into ribosomes, an organelle that will be covered in the next section. In light microscope, nucleolus appears intensely basophilic, like a blob of heterochromatin. However, the bulk of nucleolus is RNA so the similarity is very superficial.