One of the most important functions of skeletal muscle is to contract and cause movement. Skeletal muscles act not only to produce movement but also to stop movement. Constant small contractions of the skeletal muscle are needed to hold a body upright in any position, even at rest. Muscles also prevent excess movement of the bones and joints, maintaining skeletal stability and preventing skeletal structure damage or deformation. Skeletal muscle is located throughout the body at the openings of internal tracts to control the movement of various substances. This muscle allow voluntary control of specific functions, such as swallowing, urination, and defecation. Skeletal muscles also protect internal organs (particularly the abdominal organs) by acting as an external barrier or shield to external trauma and by supporting the weight of the organs.

Skeletal muscles contribute to the generation of heat, primarily by shivering or intense bursts of movement. Muscle contraction requires energy, and when ATP is broken down, heat is produced. This heat is very noticeable during and following intense active movement such as running. In this case, sustained muscle movement causes body temperature to rise. Similarly, when environmental temperatures are low, random skeletal muscle around the appendicular skeletal produces random skeletal muscle contractions to generate heat (shivering). 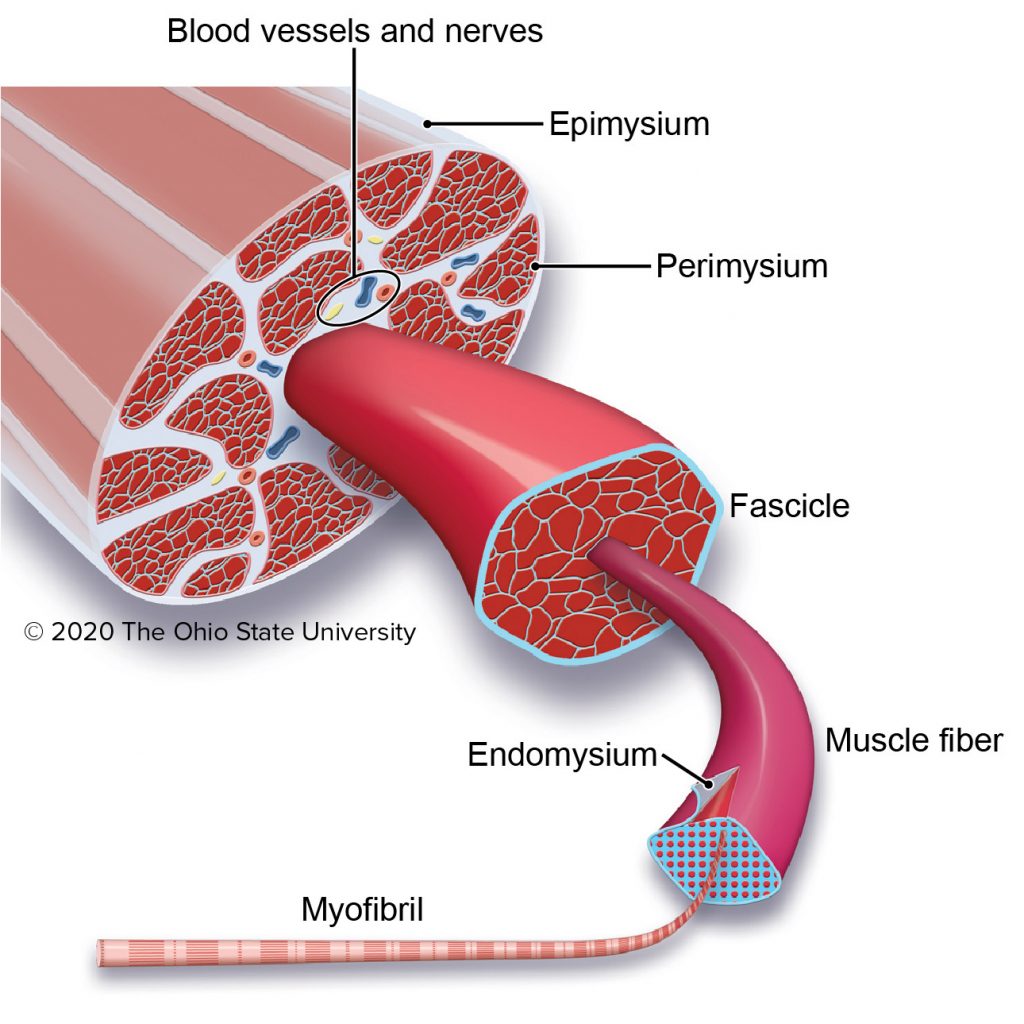 Some terminology associated with muscle fibers are rooted in the Greek sarco, which means “flesh.” The plasma membrane of muscle fibers is called the sarcolemma, the cytoplasm is referred to as sarcoplasm, and the specialized smooth endoplasmic reticulum that stores and controls the release of calcium ions (Ca++) is called the sarcoplasmic reticulum (SR). The functional unit of a skeletal muscle fiber is the sarcomere, a highly organized arrangement of the contractile myofilaments actin (thin filament) and myosin (thick filament), along with other support proteins. Individual sarcomeres are joined together in a long chain called a myofibril and attaches to the sarcolemma at its end. Myofibrils are bundled together within the sarcoplasm. In addition, there are invaginations of the sarcolemma into the sarcoplasm that surround the myofibrils. These are referred to as t-tubules. The t-tubules system conveys the action potential from the sarcolemma into the cell in order stimulate the myofibrils.

Distinct lines or bands in the sarcomere are apparent where the myosin and actin filaments overlap as well as where the sarcomere connect to each other consecutively. This is what gives skeletal muscle its striated appearance on histology. In fact, skeletal muscle and cardiac muscle (because cardiac muscle also has sarcomeres) are also known as striated muscle. As the sarcomeres and thus, the myofibrils contract, the entire muscle cell contracts. Because the actin and its troponin-tropomyosin complex (projecting from the Z-discs toward the center of the sarcomere) form strands that are thinner than the myosin, together it is called the thin filament of the sarcomere. Because the myosin strands and their multiple heads (projecting from the center of the sarcomere, toward but not all to way to, the Z-discs) have more mass and are thicker, they are called the thick filaments. As mention before, in order for a sarcomere to contract, calcium released from the sarcoplasmic reticulum after a stimulatory action potential from the T-tubules is generated. Calcium interacts with molecules on the actin filaments, troponin and tropomyosin, which normally block myosin binding sites on actin. ATP binding to myosin causes release of the myosin head from actin. 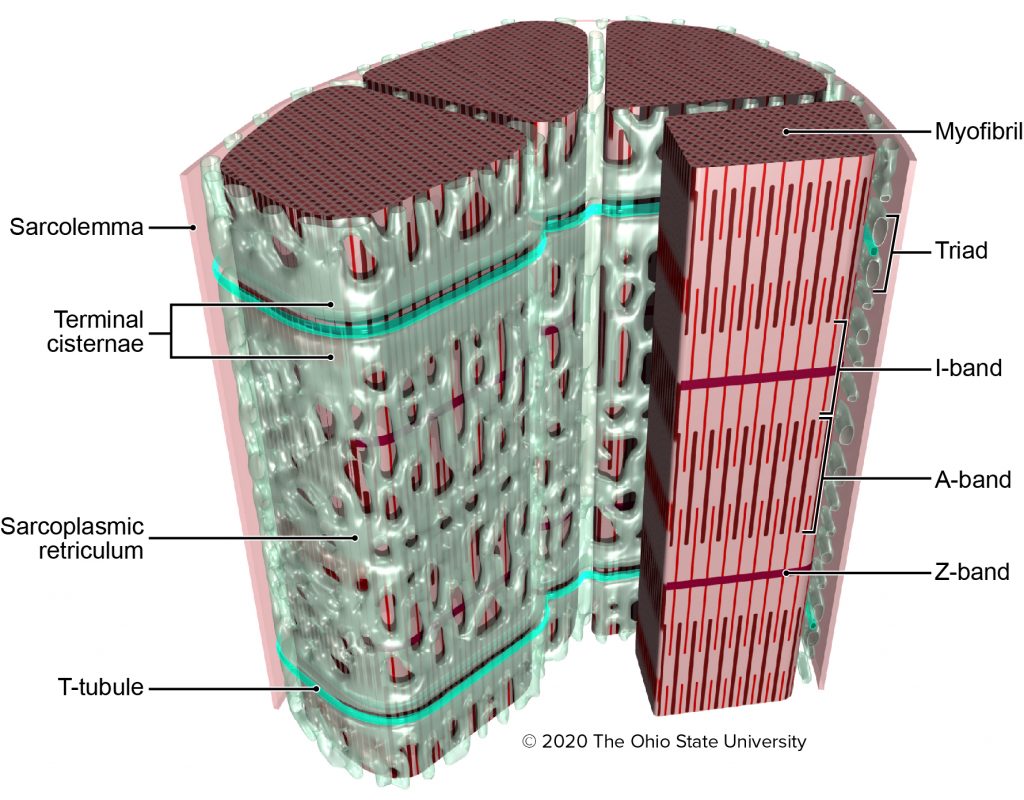 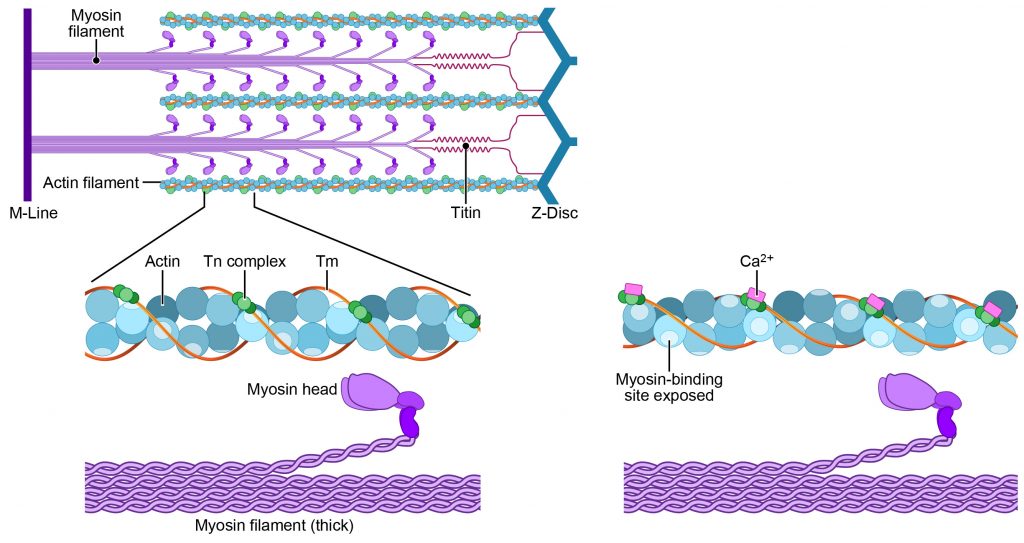 Contraction of the sarcomere involves several steps. In order to understand these step, you must understand that myosin head has several important characteristics.

During contraction the following steps occur: