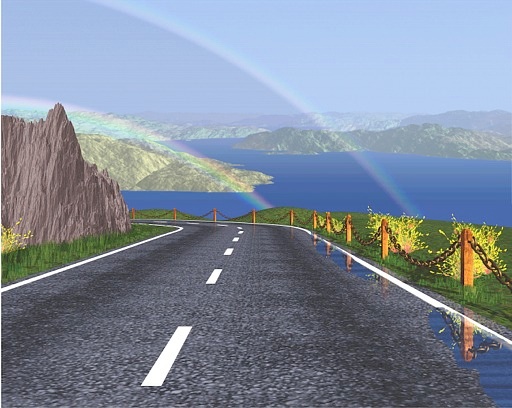 The Road to Point Reyes was developed by Lucasfilm Computer Graphics Project personnel (Alvy Ray Smith, Rob Cook, Loren Carpenter, Bill Reeves, Tom Porter and Davis Salesin) in 1983, and was featured as the title page image for the SIGGRAPH 83 conference proceedings. It was exhibited at the Computer Museum in Boston in 1984-1985. The goal at Lucasfilm was to create an image of the complexity and resolution to show that CG technology could be used effectively in the movie-making process. The image (4096×4096 at 24 bits per pixel) has been called “a movie in a frame”, and showed the application of significant advances in the CG technology that were being perfected at Lucasfilm, including advanced 3D modeling, fractals, particle systems, “graftals”, compositing, texture mapping, advanced lighting and atmospheric effects, water and water effects, and graphics hardware and systems.

The image is a tribute to the researchers at Lucasfilm that subscribed to the philosophy that permeated the computer graphics discipline, that advances in technology should be shared with peers in the interest of achieving the long term goals of creating better synthetic imagery.