Chapter 2: The emergence of graphics technology

The evolution of the digital computer continued with the Whirlwind computer. Development of the Whirlwind began in 1945 under the leadership of Jay Forrester at MIT, as part of the Navy’s Airplane Stability and Control Analyzer (ASCA) project. The system was proposed in order to provide a “programmable” flight simulation environment and was first demonstrated in 1951. This was not the first digital computer, but it was the first computer capable of displaying real time text and graphics, using a large oscilloscope screen.

Whirlwind received positional data related to an aircraft from a radar station in Massachusetts. The Whirlwind programmers had created a series of data points, displayed on the screen, that represented the eastern coast of Massachusetts, and when data was received from radar, a symbol representing the aircraft was superimposed over the geographic drawing on the screen of a CRT. Robert Everett (who later became CEO of Mitre Corporation) designed an input device, which was called a light gun or light pen, to give the operators a way of requesting identification information about the aircraft. When the light gun was pointed at the symbol for the plane on the screen, an event was sent to Whirlwind, which then sent text about the plane’s identification, speed and direction to also be displayed on the screen.

As a result of performance and expense, Forrester opted not to use new mercury delay line memory or electrostatic storage tubes. Instead he investigated a magnetic ceramic called Deltamax, which could be subjected to magnetic pulses which would result in a change of state that could remain indefinitely. Called core memory, each component was a donut shaped metal that had two electrical wires strung through it. Neither was strong enough in power to change the state of the magnetism, but together they were. Thus it was a randomly addressable storage and access medium.

The Whirlwind project was very expensive and made up the bulk of the Office of Naval Research budget. As a result, it became the target of congressional budget cutters, who threatened to reduce the allocation from $1.15M to $0.25M in 1951. Through intense lobbying by MIT, the Whirlwind computer was ultimately adopted by the U.S. Air Force for use in its new SAGE (Semi-Automatic Ground Environment) air defense system, which became operational in 1958 with more advanced display capabilities.
http://www.mitre.org/about/sage.html

The Deltamax core was replaced by faster ferrite core memory in 1953. RCA applied for the contract to manufacture SAGE but it ultimately was awarded to IBM, who placed two Whirlwind computers in each of the 23 Air Force SAGE centers. Due to the launch of Sputnik, the Air Force became less concerned about long range bombers, and more concerned about intercontinental ballistic missiles, and it was phased out. The last of the Whirlwind-based SAGE computers was shut down in 1983, giving the Whirlwind a record for practical operational longevity among early digital computers.

Besides the innovations related to computing hardware and software technology, the Whirlwind and SAGE projects helped to open the door to the computer graphics discipline by providing the CRT as a viable display and interaction interface, and introduced the light pen as an important input device. The Whirlwind and SAGE projects are documented in a 1999 book published by the National Academies Press, titled Funding a Revolution: Government Support for Computing Research (details are on page 91ff in Chapter 6). It can be read and/or downloaded at https://www.nap.edu/read/6323/chapter/1 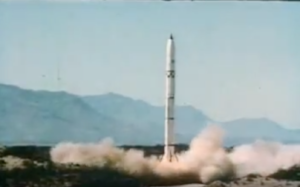 http://www.youtube.com/watch?v=Kpahs3MAEDc
The first half of the movie “On Guard!” produced by IBM, is about the SAGE project. The second half covers the process of making computers flight-worthy.