Artist David Em was hired at JPL as an artist-in-residence, and adapted scientist Jim Blinn’s visualization software to realize his own artistic ideas. Em admitted, though, that the JPL deep space environment influenced the quality and look of his artwork. From the Digital Art Museum entry on David Em:

David Em started as a painter but in 1974 began to experiment with electronic manipulations of TV images. This led to his involvement with the Xerox Research PARC in Palo Alto and to collaboration with computer graphics pioneers Alvy Ray Smith and Dick Shoup, inventor of the frame buffer. In 1976 Em had access to equipment at Triple-I, set up by Gary Demos and John Whitney Sr., but it was the introduction to the Jet Propulsion Laboratory (JPL) and the research work of pioneer James Blinn that led to Em’s mature computer art style. The works produced at JPL led to the first ever artist’s monograph published on digital art. [1]

Author Ray Bradbury made the following statement about David Em and his work, titled EM SQUARED, taken from the introduction page on Em’s website.

We live in confusing times.

Books do not look like books. They sometimes resemble computer chips. This makes for a slight misalignment among some readers who refuse to pick up a computer chip to try to turn the pages

In the field of art a semipanic spreads. Artists, like many another in other fields, fear that the machine is here to mash their toes, chop their fingers, or put out their eyes.

The computer lurks with intention to loom. Men run down the middle of the streets crying, “The dam has broke!” forgetting they live in a town with no water and no dam.

Have you or have you not heard it said that the day is fast coming when the artists will be replaced by a robot. We will all retire from the field and leave the computer as mindless Michelangelo inside the church painting the far wall and the upper ceiling. When Godreaches down his Great Hand it will not touch Adam, it will touch Apple or Commodore or the Xerox Mark 10.

It’s enough to make a chap turn in his oils and burn his canvases.

And yet. And yet…

Behold the work of David Em No computer, no robot, he. A man of flesh and wildly imaginative blood. But what’s that he holds in his hand? Is it a brush, a tube of color, a jar of ink?It is not. It is, God help us all, the dread machine, the awful electric device that will fry and bury all art and artists. Yet, further behold. David Em is neither fried nor buried. HE is much alive, alive, O. And the landscapes of his imagination juice out his fingertips, through his pet Ben Franklin lightning bolt device, and flash as images not unlike those of childhood when someone struck your brow with a horseshoe or baseball bat. From these painful kaleidoscopic explosions Mr. Em has culled forth some bright new shapes and forms, told them to pull up their socks and behave, and delivered forth into our hands and eyes, a New Art Form. He has not, of course, done this alone. But he is preeminent in a field that is as swiftly flowing and changing as a storm stabbing its way across country walking on stilts of electric fire.

Ready or not, here he comes. 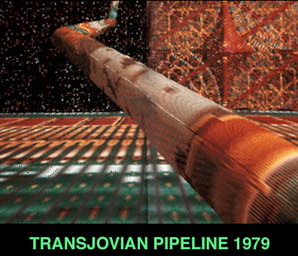 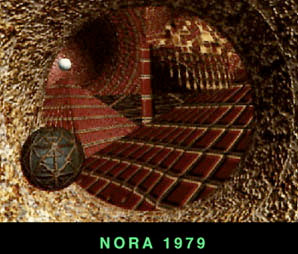 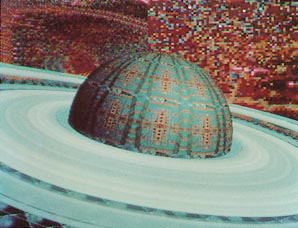 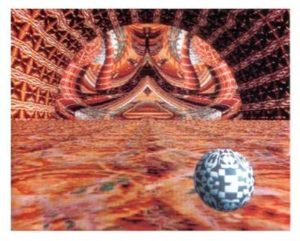 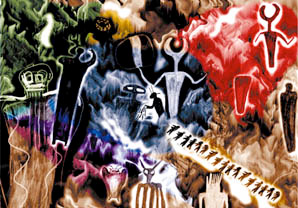 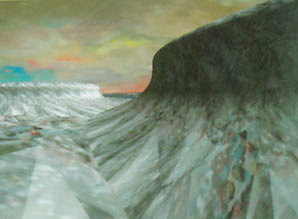