Dan Sandin came to the University of Illinois at Chicago Circle from the University of Wisconsin in 1971 and developed the Sandin Image Processor, which could be thought of as the visual counterpart to the MOOG synthesizer. He was joined the next year by Tom DeFanti, who had developed the Graphics Symbiosis System (GRASS) as part of his PhD work with Chuck Csuri at the CGRG at Ohio State. Together, they organized the Circle Graphics Habitat, which became an environment for experimental computer graphics, video production, and educational materials development. Later in 1987, they were joined by Maxine D. Brown as Associate Director.

Some of the most important early work at the Habitat revolved around the Z Box (Z-50 processor) project, which resulted in the development of ZGRASS, which was an early PC-based graphics system for the Bally computer (1981). In the words of Jane Veeder, it provided

“…real time animation and real time sound synthesis accessed by a custom language optimized for interactive artmaking, all wrapped up together like a hot little sports car.”

The box had an NTSC video output port, which provided video recording and display capabilities for artists. DeFanti et al attempted to commercialize the product through their company, Real Time Design, Inc. Artist Larry Cuba produced an animated sequence for the movie Star Wars on the system at Chicago in 1977.

Later contributions were in mathematics visualization and virtual reality, including the CAVE environment and the Immersadesk. DeFanti also contributed immensely to the SIGGRAPH organization, as its President and with contributions to their annual conference. DeFanti and the group at Chicago began a project to archive all of the films and videos shown at the SIGGRAPH conference, resulting in the SIGGRAPH Video Review (SVR). The Circle Graphics Habitat later became the Electronic Visualization Lab (EVL).

Research work at EVL over the years has included[1]:

Highlights of the electronic art work done at EVL include:

Norman Badler received his PhD at the University of Toronto. He joined the faculty of the University of Pennsylvania in 1974, and started the Computer Graphics Research Laboratory in the Computer and Information Science Department (in 1994 the lab became the Center for Human Modeling and Simulation). Research focused on his research emphasis on human figure animation, including human figure modeling, manipulation, and animation control, embodied agents, intuitive user interfaces, and computational connections between language and action. An early contribution with Maxine Brown and Steve Smoliar was in the area of Laban Notation scripting for animation. The lab achieved international recognition for its research and specifically for the Jack software (later marketed as a commercial product by Engineering Animation, Inc.).

Jack provided a 3-D interactive environment for controlling articulated figures. With his human-like ability to reach and grasp as well as detect and avoid “collisions” with objects in his virtual environment, Jack could be animated to perform a variety of tasks that engineers could observe and evaluate. Jack featured a detailed human model who behaved realistically in various virtual environments. Designers could test the reach, range of motion, and other features of any size human, as he or she would fit within a designed space. For example, engineers would use Jack to determine whether crucial instruments within an aircraft cockpit fall within comfortable reach of the pilot, thus saving time and expense in building prototypes. 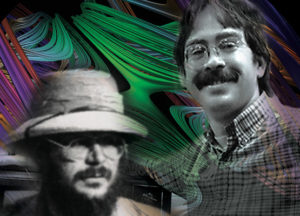 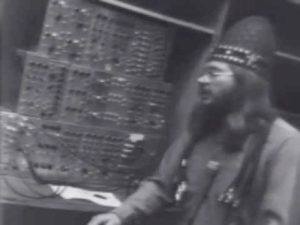 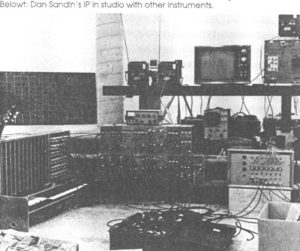 Equipment in the DeFanti/Sandin laboratory at the Circle Graphics Habitat at the University of Illinois at Chicago Circle.Source: http://www.audiovisualizers.com/toolshak/vidsynth/sandin/sandin.htm 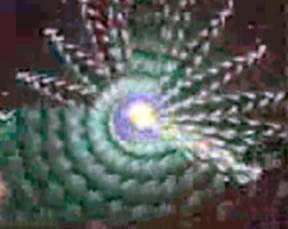 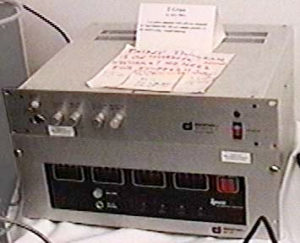 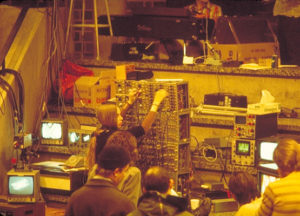 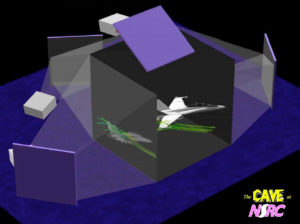 A diagram of the CAVE at the National Supercomputing Research Center (NSRC). The CAVE (CAVE Automatic Virtual Environment) was developed by DeFanti, et al at the University of Illinois. This CAVE installation is an enclosed 10 feet cube room-sized advanced visualization tool that combines high-resolution, stereoscopic projection and 3D computer graphics to create the illusion of complete  immersion  in a virtual environment.