Chapter 16: The GUI and the personal computer

In 1975 the researchers at Xerox PARC (Palo Alto Research Center) moved into their permanent headquarters at 3333 Coyote Hill Road near Stanford University in Palo Alto, California. Jacob Goldman had founded PARC just five years previous, and already at this early date the research team had developed many of the ideas that shaped the future of computing.[1]

The Palo Alto Research Center’s mission as directed by Xerox management was to create the office of the future. To that end they created many of the technologies we take for granted in the modern office, such as networked personal computers, with email, word processing, and laser printing, but the most significant innovation at PARC was the graphical user interface (GUI), the desktop metaphor that is so prevalent in modern personal computing today.

The GUI would make computer graphics an everyday part of the working environment. No longer would the display be simply lines of code and commands, it would be graphical with a true representation of typefaces and images. The bitmapped GUI display would help promote the concept of WYSIWYG (what you see is what you get) allowing people to laser print exactly what they saw on the screen.

In workstations of the past, graphics and commands where split between three different screens, a vector device for line graphics, a text display for entering commands, and a video / raster graphics screen coupled with a frame buffer to display the final rendered result. Xerox PARC combined these separate technologies into one raster graphics screen along with an easier way of issuing commands: the pop up menus, icons, and desktop metaphor of the graphical user interface. While mainline computer engineers scoffed at the idea of one computer for each person, the Xerox team built the Alto personal computer. Traditional computer applications centered on number and data manipulation; the Xerox team focused on words, design and communications.

The first GUIs tried at Xerox PARC were very difficult to work with and depended too much on the processor to re-draw each bit when moving overlapping windows around. In 1974 a PARC researcher named Dan Ingalls , who was one of the principle architects of the Smalltalk object oriented language, invented a procedure for the movement of whole blocks of bits on the screen called “Bit Blit”, or BitBLT. This display algorithm allowed overlapping windows to be quickly shuffled around the screen without overtaxing the processor.

The Xerox Star was the first commercial personal computer to use the now common desktop metaphor. David Smith, developer of the Star interface, said in a 1982 article:

“Every user’s initial view of the Star is the Desktop, which resembles the top of an office desk, together with surrounding furniture and equipment. It represents a working environment, where projects and accessible resources reside. On the screen are displayed pictures of familiar office objects, such as documents, folders, file drawers, in-baskets, and out-baskets. These objects are displayed as small pictures, or icons.”

PARC was initially divided into three units: the Computer Science Lab (CSL), the Systems Science Lab (SSL), and the General Science Lab (GSL). The CSL, run by Bob Taylor, was most responsible for the development of the graphical user interface. Taylor had worked on the ARPAnet, (a distributed network of computers, the predecessor to the Internet) and brought the idea of networked computers to PARC.

By 1979 there were hundreds of Altos networked together with more traffic and ‘nodes’ than the entire ARPAnet. Xerox PARC even had the world’s first computer virus called a ‘tapeworm’ because it would eat it’s way through the Ethernet and consume all available resources. Like many of PARC’s innovations networking was ahead of it’s time, and would not be widely available in personal computers for another decade.

In 1979, Xerox decided against marketing the Alto system. By then the organization barely resembled the buoyant company that a decade earlier had challenged both IBM and the office of the future. External factors including fierce competition, government antagonism, and economic recession all marked Xerox’s slide from overconfidence to loss of confidence. Internal forces were even more combustible, as the company’s research, finance, and marketing groups each pursued a separate vision of the “right” Xerox future. In the end, the company that invented the first version of the personal computing future found itself struggling to recapture the advantages of its copier past.

Alto had the ability to show other computers on the network as icons on it’s graphical desktop. Much later Macintosh acquired this ability. With the birth of the Internet and the World Wide Web, computers could network to others across the world, but this was done with a separate application that was at first nongraphical (telnet, text-based FTP software). Later applications for accessing the internet became more GUI-like but were not part of the operating system (TurboGopher, Fetch, Anarchie). With the introduction of the first graphical web browser, Mosaic, in 1993 accessing the internet began to look more like an environment one would see with a GUI.

With the release of Windows 95 and NT, Microsoft attempted to blur the distinction of the web browser application and operating system by bundling Windows 95 with Internet Explorer. The windows and interface of Windows 95 could be set so that browsing the local computer looked almost the same as browsing the Internet. Microsoft got into legal trouble because the bundling strategy was seen as an attempt to block competition from Netscape and other browsers. (See Landgrave article listed in bibliography box below)

John Warnock (University of Utah) helped develop Interpress and other printing and page description systems at PARC which allowed the Alto to become the first WYSIWYG computer when coupled with Xerox’s laser printer. Later Warnock founded Adobe Systems which along with Apple computer helped bring about the desktop publishing revolution of the late 1980s . The combination of the Macintosh, the LaserWriter, and Adobe’s page description software would forever change the world of publishing, typesetting, and graphic design.

Larry Tesler at PARC, who would later be part of the Apple LISA development team, began work on Gypsy, the world’s first user friendly word processing application using pop-up menus and icons in 1974. Gypsy was later to become the basis for Microsoft Word when it’s co-creator Tim Mott and others at PARC went to work at Microsoft. Gypsy was essentially the world’s first desktop publishing software with advanced features such as drawing and editing graphics within the same application as the word processor. These features began to emerge in software packages such as Adobe InDesign and QuarkXpress.

It is widely believed that the Xerox corporate management never realized what they had at PARC — it seems that they never shared the same vision as the researchers. The innovations developed there were never marketed successfully under the Xerox name. It took outside companies to market PARC innovations in GUI and WYSIWYG to make them the standards they are today.

“Office automation has emerged as a full-blown systems approach that will revolutionize how offices work.”  (Business Week, June 1975)

“The basic purpose of Xerox Corporation is to find the best means to bring greater order and discipline to information. Thus, our fundamental thrust, our common denominator, has evolved towards establishing leadership in what we call ‘the architecture of information’. What we seek is to think of information itself as a natural and undeveloped environment which can be enclosed and made more habitable for the people who live and work within it. “  (C. Peter McCulough, CEO Xerox Corporation)

“None of the main body of the company was prepared to accept the answers. So there was a tremendous mismatch between the management and what the researchers were doing and these guys had never fantasized about what the future of the office was going to be. When it was presented to them they had no mechanisms for turning those ideas into real live products and that was really the frustrating part of it. You were talking to people who didn’t understand the vision and yet the vision was getting created everyday within the Palo Alto Research Centre and there was no one to receive that vision.”  (John Wamock)

“People came there specifically to work on five year programs that were their dreams.”  (Adele Goldberg, Former Xerox PARC Researcher  )

“Everybody wanted to make a real difference, we really thought that we were changing the world and that at the end of this project or this set of projects personal computing would burst on the scene exactly the way we had envisioned it and take everybody by total surprise.” ( Larry Tesler)

Here is a sampling of PARC contributions. To view a timeline of GUI contributions, see Section 5 in this chapter. 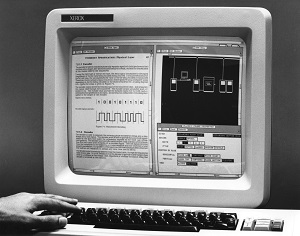 Microsoft’s Settlement: the End of an Era, Tim Landgrave
http://www.techrepublic.com/article/microsofts-settlement-the-end-of-an-era/