George Lucas was born and raised in Northern California. He attended the University of Southern California film school. Always considering the Bay Area his home, Lucas returned to Northern California to pursue his film career. In 1971 he formed his own independent production company, Lucasfilm Ltd., in Marin County, just north of the Golden Gate Bridge.

In July of 1975, with the Star Wars saga already written and design work begun the previous year, Industrial Light & Magic (ILM) was established[1] to produce the visual effects for Star Wars. That same year Sprocket Systems was established to edit and mix Star Wars. It was later to become known as Skywalker Sound. In 1977 Star Wars opened and became the largest grossing film of all time to that date. It received six Academy Awards for original score, film editing, sound, art and set decoration, costume design and visual effects, as well as a Special Achievement Academy Award for sound effects creations.

With the release of The Empire Strikes Back in 1980 and a new home in San Rafael, ILM began to establish itself as the leader in visual effects production. The same year, ILM began to work on its first non-Lucasfilm picture, Dragon Slayer.

Throughout the 1980s, ILM continued to receive recognition for its visual effects work, earning 10 Visual Effects Academy Awards during that decade. Included among the films honored are: The Empire Strikes Back, Raiders of the Lost Ark, E.T. The Extra-Terrestrial, Return of the Jedi, Who Framed Roger Rabbit and The Abyss. In The Abyss, ILM made further breakthroughs in computer graphics with its creation of the pseudopod, the first wholly computer-generated character [in a motion picture].

Skywalker Sound was also honored with 5 Academy Awards during this period for Best Sound and Best Sound Effects Editing on films including The Empire Strikes Back, Raiders of the Lost Ark and E.T. In 1987, construction was completed on the Technical Building at Skywalker Ranch, Lucas’s film production facilities in central Marin, allowing Skywalker Sound to move into the 145,000 square-foot facility.’

Terminator 2: Judgment Day in 1991 was another milestone in the history of Lucas Digital. Additional advancements and achievements in the field of computer graphics were realized. Both ILM and Skywalker Sound were rewarded with Academy Awards for their work on the film.

In 1992 George Lucas was honored by The Academy of Motion Picture Arts and Sciences with the Irving Thalberg Award. This award is voted by the Academy Board of Governors to a creative producer whose body of work reflects a consistently high quality of motion picture production and is given only in years when the Board feels there is a deserving recipient. Steven Spielberg presented the Thalberg statue to Lucas at the Academy Awards Ceremony on March 30th.

The following year, in 1993, a new corporate structure was set up among Lucas’s various companies to allow for management flexibility and accountability. Three separate companies were the result of the restructure:

That same year, ILM completed the visual effects for Jurassic Park, creating computer graphic animals which blended flawlessly with the live action footage while Skywalker Sound was in charge of creating the audio effects. Again, both units were recognized with Academy Awards for their work in Sound, Sound Effects Editing and Visual Effects.

The nineties saw continued success and awards for both companies. Notable films that benefited from their expertise included Forest Gump, The Mask and Twister. In 1997, the twentieth anniversary date of Star Wars, all three movies in the Star Wars trilogy were rereleased. New and refined digital footage was inserted and the sound was enhanced. Record crowds greeted familiar characters with applause and delight and Star Wars once again became the largest grossing movie of all time.

Lucas hired effects expert John Dykstra to head a new production facility, located in old warehouses in Van Nuys, California. After completing Star Wars he relocated ILM to the Bay Area. They are located in San Rafael, California, but have several other campuses, including in the Presidio Park in San Francisco (information about the campuses can be found at  http://www.lucasfilm.com/inside/campuses/)

After ILM finished Star Wars, Lucas contracted Triple-I for several CG effects tests, including animating X-wing fighters (Art Durinski and Gary Demos produced the tests) for The Empire Strikes Back. Lucas was impressed but couldn’t come to contractual terms with Triple-I. Instead he made the decision to establish his own CG division, and recruited most of the researchers and management from NYIT, including Alvy Ray Smith and Ed Catmull, to staff the new division.

The initial years were spent in research, developing film scanners and recorders, software for CG compositing, rendering architectures capable of film work, and computer assisted film and sound editing. The first production work came for the Genesis sequence for Star Trek II, The Wrath of Khan (see discussion in the Pixar section.)

Many of the CG team reorganized to form Pixar and Lucas reformed the Lucasfilm CG division as the ILM Computer Graphics Division, but as it grew in importance it became the prominent component of ILM, and the distinction as a separate name and division disappeared. Lucas Digital was the umbrella company for ILM and Skywalker Sound. The other Lucas companies were Lucasfilm, LucasArts, Lucas Licensing, and Lucas Learning.

In the early days of the company, they also established a CGI commercial production division. This group accounted for a large percentage of ILM’s income during this time, but saw its importance diminish with a downturn in the economy and a cutback by customers for CG advertising work. As a result, ILM decided to close the department in mid-2002.

The Lucasfilm Computer Graphics Group developed several industry leading hardware and software systems. The Pixar Image Computer was developed for compositing operations. The internal frame buffer was a special built hardware component that was controlled mainly by SUN machines and driven via command line. In 1984 it was used to composite the stained glass knight for the movie Sherlock Holmes. It was also coupled with the ILM built laser film scanner and recorder. They also developed a high quality renderer suitable for photorealistic film-resolution work. The scanline rendering algorithm was called REYES (Renders Everything You Ever Saw). The group developed shading trees which eventually became RenderMan’s Shading Language.

One of the early images made by the group was called Road to Point Reyes. The rights to much of this ILM hardware and software technology was sold to Steve Jobs in 1986, as Pixar was founded (see next section).

The computer group associated with the graphics group developed a system to do film editing, which was called EditDroid. This development effort was headed by Ralph Guggenheim, who also came from NYIT. EditDroid was the first non-linear editing system. It was based on SUN hardware coupled with a laserdisc system and 3/4″ tape recorders. It had a custom touchpad used to make the cuts, and its interface used a timeline approach.

The SoundDroid was a similar custom computer system based on the Audio Signal Processor computer the group first built. It had an interface with a touchpad that permitted cutting and editing sound clips. Afterwards Lucas created a company called DroidWorks which would develop and sell these systems, but being custom solutions they were quite expensive. Eventually Lucas licensed and sold much of the technology to Avid in 1993.

Other innovations that have come out of the ILM efforts include:

ILM has significantly influenced the entire CGI industry, through its innovative software and hardware research and development, its incredible film work, and also through the companies that have grown with former ILM people. Some examples of such companies are: 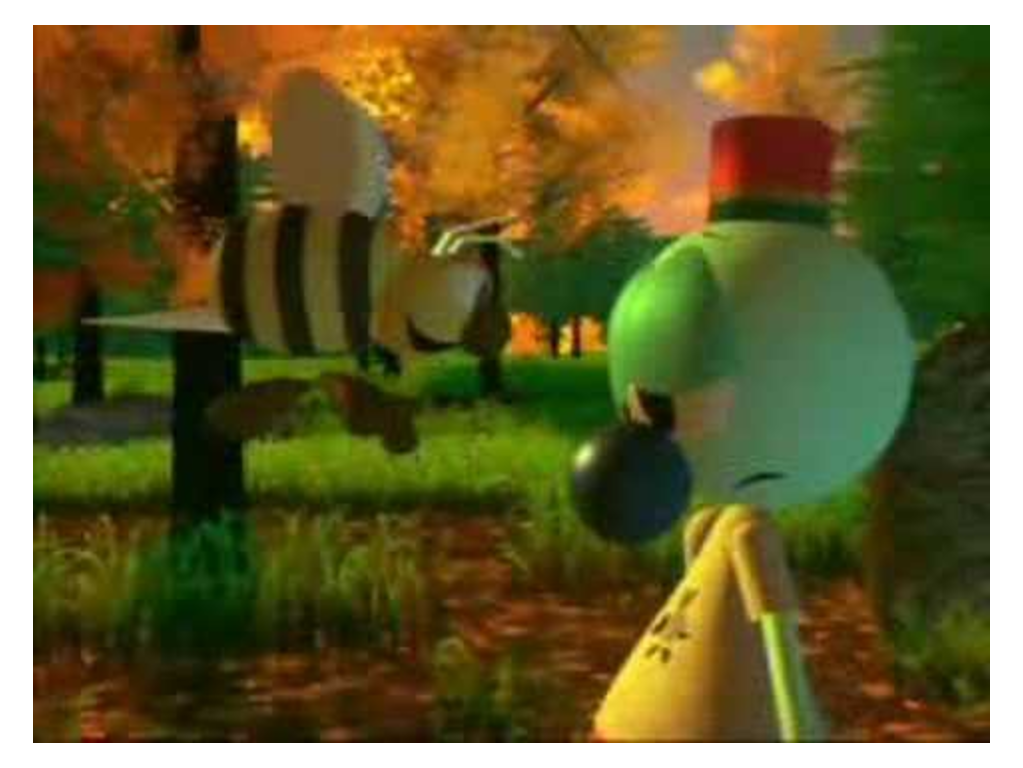 Alvy Ray Smith originally conceived the idea for this short, which represented André as a robotic style “android”. John Lasseter was brought on to ILM to help realize the film, and he changed the character to a more organic form. It was rendered on the new ILM REYES system, which integrated motion blur, a lighting approach developed by Rob Cook, a particle system plant generation approach developed by Bill Reeves, and a new animation system called Motion Doctor realized by Tom Duff. It was rendered on all of the VAX computers at ILM, some borrowed machines at MIT, and several Crays from Cray Research in Minnesota. a Mitchell camera filmed it one frame at a time from the monitor. It premiered at SIGGRAPH 84, with George Lucas and his the girlfriend Linda Rondstat in attendance.
https://www.youtube.com/watch?v=C-L-WA-nQzI

Note: It was announced on October 30, 2012 that Lucasfilm, Ltd. including LucasArts, Industrial Light & Magic, and Skywalker Sound, would be purchased by Disney from George Lucas for $4.05B in cash and stock.

The Mac Rebel Unit was a group within ILM that used Macs to do their jobs. Its name is taken somewhat jokingly from being a smaller band of “rebels” amid the large “empire” sized Unix and Linux based groups. The unit was started by Dennis Muren and was primarily composed of artists. Among the work that they did was painting of texture and image maps, digital matte paintings, some compositing, rotoscoping and even some 3D work. The Art Department and the Star Wars prequels pre-visualization unit were also Mac based. Among the tools the Rebel Mac unit used were Photoshop, Commotion and Electric Image. (From the ILMFan.com web site FAQ).

An excellent accounting of the development of Lucasfilms, including the efforts at NYIT that would ultimately become Pixar, can be found in the book Droidmaker- George Lucas and the Digital Revolution, by Michael Rubin, which is available as an eBook from the iTunes store.

An article written by Alvy Ray Smith in the IEEE Annals of the History of Computing, for their 1998 special on Graphics Remembrances, details the presentation by the CG effects team to convince George Lucas to utilize CGI in his films (George Lucas Discovers Computer Graphics)

The Making of the Genesis Sequence
(Video – http://www.youtube.com/watch?v=Qe9qSLYK5q4 )

The Visual Effects of Willow

In late 1981, the home and arcade game company Atari approached George Lucas with a proposal to bring high quality graphics technology to the game design world, and in 1982 Lucasfilm and Atari joined forces. Lucasfilms hired UNIX expert Peter Langston who assembled a team of programmers (including David Fox and David Levine) to work on two proof-of-concept prototype games, Ballblazer and Rebel Rescue (Rescue on Fractalus!). Loren Carpenter contributed an approach to generating fractal mountains, and the prototypes were so successful they became the first products of the new Lucasfilm Games division in 1984. The games were developed in the UNIX environment, and copies were leaked and appeared on a games BBoard before they were released.