Another MIT engineer, Ken Olsen, was working at Lincoln Labs on the TX-2 project. In 1957 Olsen founded the Digital Equipment Corporation (DEC). He shepherded the transition of the TX-2 technology into a commercial environment, and in 1961 started construction of DEC’s first computer, the PDP-1. The PDP-1 was considered a milestone in the computer era, because it was the world’s first commercial interactive computer. It was used by its purchasers to pioneer timesharing systems, making it possible to have access to much more (affordable) computing power than ever before.

In 1961 a young computer programmer from MIT, Steve Russell led a team that created the first computer game. It took the team about 200 man-hours to write the first version of Spacewar! (or Spacewar). They wrote Spacewar on a PDP-1 which was a donation to MIT from DEC, who hoped MIT’s think tank would be able to do something remarkable with their product.

The PDP-1’s operating system was the first to allow multiple users to share the computer simultaneously. This was perfect for playing Spacewar, which was a two-player game involving warring spaceships firing photon torpedoes. Each player could maneuver a spaceship and score by firing missiles at his opponent while avoiding the gravitational pull of the sun. Russell transferred to Stanford University, where he introduced computer game programming and Spacewar to an engineering student named Nolan Bushnell, who went on to write the first coin-operated computer arcade game and start Atari Computers.

“We had this brand new PDP-1,” Steve Russell recalls. “It was the first minicomputer, ridiculously inexpensive for its time. And it was just sitting there. It had a console typewriter that worked right, which was rare, and a paper tape reader and a cathode ray tube display. Somebody had built some little pattern-generating programs which made interesting patterns like a kaleidoscope. Not a very good demonstration. Here was this display that could do all sorts of good things! So we started talking about it, figuring what would be interesting displays. We decided that probably you could make a two-dimensional maneuvering sort of thing, and decided that naturally the obvious thing to do was spaceships.”
From S P A C E W A R – Fanatic Life and Symbolic Death Among the Computer Bums, by Stewart Brand. Rolling Stone Magazine, 12/7/1972

Through the 1960s DEC produced a series of machines aimed at a price/performance point below IBM ‘s 18-bit word, core memory mainframe machines. In 1964 they introduced the PDP-8. It was a smaller 12-bit word machine that sold for about $16,000. The PDP-8 is generally regarded as the first minicomputer. It was important historically because their low cost and portability made it the first computer that could be purchased by end users as an alternative to using a larger system in a data center. Many small computer graphics labs could now have a dedicated computer on which to experiment with new software and hardware.

Arguably the most important computer in the PDP series was the PDP-11, which switched to a 16-bit word once everyone in the computer industry started using ASCII. PDP-11 machines were introduced in the market essentially as upscale PDP-8s, but as improvements to integrated circuits continued, they eventually were packaged in cases no larger than a modern PC . Their larger PDP-10 cousins, which used a 36-bit architecture, were aimed at data-processing centers instead, eventually being sold as the DECsystem10 (or PDP-10) and DECsystem20.

While the PDP-11 systems supported several operating systems, including DEC’s RSTS system, their most important role was to run Bell Labs’ new UNIX operating system that was being made available to educational institutions.

The PDP-11 had a 64K address space. Most models had a paged architecture and memory protection features to allow timesharing, and could support split I&D architectures for an effective address size of 128K.
http://www.wikipedia.org/wiki/PDP-11

In 1976 DEC decided to move to an entirely new 32-bit platform, which they referred to as the super-mini. They released this as the VAX 11/780 in 1978, and immediately took over the vast majority of the minicomputer market. Desperate attempts by competitors such as Data General (which had been formed in 1968 by a former DEC engineer who had worked on a 16-bit design that DEC had rejected) to win back market share failed, due not only to DEC’s successes, but the emergence of the microcomputer and workstation into the lower-end of the minicomputer market. In 1983 , DEC cancelled their “Jupiter” project, which had been intended to build a successor to the PDP-10, and instead focused on promoting the VAX as their flagship model.

The VAX series had an instruction set that is rich even by today’s standards. In addition to the paging and memory protection features of the PDP series, the VAX supported virtual memory.
http://williambader.com/museum/vax/vaxhistory.html

DEC was also an important contributor to the graphics display and terminal market. Their products were influenced by work  in the Electronic Systems Laboratory (ESL) at MIT. In 1968 they introduced the DEC 338 intelligent graphics terminal, which was a refresh display with point, vector and character drawing capability. Other devices in this class were the DEC 340, IBM 2250, and IMLAC PDS-1. In 1974 they marketed the VT-52, which incorporated the first addressable cursor in a graphics display terminal. One of their most functional terminals, the VT-100 was introduced in 1981, and operated in hundreds of computer rooms around the world. 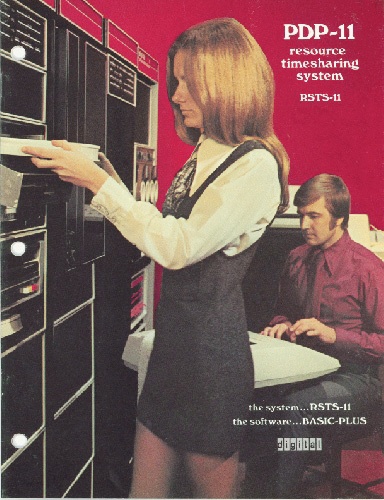 The PDP-11 was an important contributor to the graphics industry development, as it was one of the more common computers in universities and research labs, and DEC made RSTS and Unix available to educational institutions at little or no cost. The woman in the above documentation cover is loading the PDP-11 disk cassette, and the woman below is loading the punch card reader. 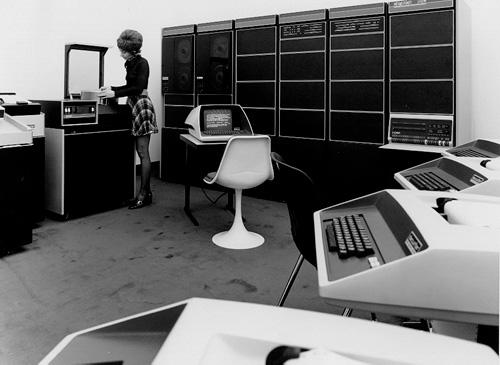