Certainly some of the big push toward better and faster graphics image generation came from the video and arcade game industry[1] Graphics moved from the primitive images of Higenbotham’s 1958 oscilloscope-based Tennis for Two and Steve Russell’s 1961 Spacewar on the PDP-1, to the more realistic environments found in later popular games like Myst and Riven, EA sports games, and games for systems like the Xbox.

The first commercial home video game was the Magnavox Odyssey, designed in 1968 and released in 1972. The game was Table Tennis, which was created by Ralph Baer, who worked for the defense-electronics company Sanders Associates. It was licensed to Magnavox and for a time was Sanders’ most profitable line, even though many in the company looked down on game development.The Odyssey used discrete logic, a type of removable circuit card that inserted into a slot similar to a cartridge slot. The system also came with plastic overlays that gamers could put on their TV screen to simulate the playing of different “games,” but only two TV sizes were supported. It also came with plastic game tokens and score sheets to help keep score, much like more traditional board games.

The next technology to hit the market was dedicated (nonprogrammable) video game consoles, which were often inaccurately called “analog” but actually used discrete logic. Examples of this kind of console was the Atari Pong game, sold by Nolan Bushnell’s Atari company (Note: Bushnell was a University of Utah graduate). The Atari unit also connected to a separate television set.

Following the success of Pong, Atari in 1977 introduced the 2600 VCS, which is considered one of the first generation of “8-bit” programmable systems. It was the home unit modeled after the very popular arcade game Pac Man. Other similar systems were the Odyssey2 (1978) (known in Europe as the Philips G7000), the Channel F (1976) and the Astrocade (1977). The 2600 used the MOS Technologies 6507 CPU with 128 bytes of RAM and a TIA video processor. Memory was so expensive that there was simply no way to have a frame buffer included with sufficient resolution. Instead Atari allocated enough memory for only one line of the display at a time. When the TV completed drawing a line, the next line was transferred to the TIA (television interface adapter) while the TV was resetting for the next line. (This became known to 2600 programmers as “racing the beam“.)

The 2600 proved to be one of the most complex machines in the world to program. Nevertheless it was that same complexity that actually made the system incredibly flexible, and when authors discovered the “tricks” the games soon started to gain in power far beyond what the original designers had ever imagined.

This generation was followed by a collapse in the video game market in North America (1984).

The market was dismal for several years, and didn’t begin returning until the introduction of the third “8-bit” generation game systems. These included the Nintendo Family System or Famicom (1985-1995), Sega Master System (1986) and the Atari 7800 (1986). At first, the Famicom console was supposed to be a 16-bit machine with a disk drive. However, the price was too high due to component prices, and so they made an 8-bit system. The Nintendo Family Computer was made intentionally to look like a toy. The Famicom design was only used in the Japanese version of this console (it was sold in the U.S. as the Nintendo Entertainment System.) It used the Nintendo 2A03 8 bit processor based on MOS Technologies 6502 core, running at 1.79MHz, with 2 KB RAM. Video memory was a PPU with 2 KB of tile and attribute RAM, 256 bytes of sprite position RAM (“OAM”), and 28 bytes of palette RAM (allowing for selection of background color), with 256×240 pixels. Donkey Kong was one of the first games used on this system. The Sega used an 8-bit 3.6 MHz Zilog Z80 CPU and a Texas Instruments TMS9918 derived VDP (Video Display Processor).

The fourth generation machines really started the rebirth of the industry. The most significant early entry in 1989 was the 16 bit Sega Genesis. The Genesis initially competed against the 8-bit Nintendo Entertainment System, but although it had superior graphics and sound, had a hard time overcoming Nintendo’s ubiquitous presence in the consumer’s home. The Genesis used the 16-Bit Motorola M68000 processor running at 7.61Mhz and a VPD (Video Display Processor) dedicated for playfield and sprite control, giving 512 colors, 80 sprites and 320 x 224 resolution. Other fourth generation machines were the Super Nintendo Entertainment System and the Philips CD-i .

The Playstation console angered Nintendo who subsequently filed a lawsuit claiming breach of contract. They attempted to, in federal court, obtain an injunction against the release of the PlayStation but the federal Judge presiding over the case denied the injunction.

The next models were the Sixth generation systems (starting around 1999.) They include the Sega Dreamcast, Sony PlayStation 2, Nuon, Microsoft Xbox and Nintendo GameCube. These systems had more of a PC-like architecture, as well as DVDs for game media.

The Seventh generation systems were introduced beginning in 2005. The Blu-ray Disc was used by the PlayStation 3, and HD DVD by the Xbox 360 (at least until the format went away.) The Nintendo Wii used motion as input, and IR tracking. All seventh generation consoles used wireless controllers. This generation also introduced theNintendo DS, and the Nintendo DSi, which added touch screens and cameras.

The Nintendo Wii U is considered the first of the eighth generation consoles. The portable consoles include the Nintendo 3DS, and Sony’s PlayStation Vita.

For more information on these video games, with listings of the titles associated with each, go to https://en.wikipedia.org/wiki/History_of_video_games

For a detailed history of video and computer games, go to http://thedoteaters.com 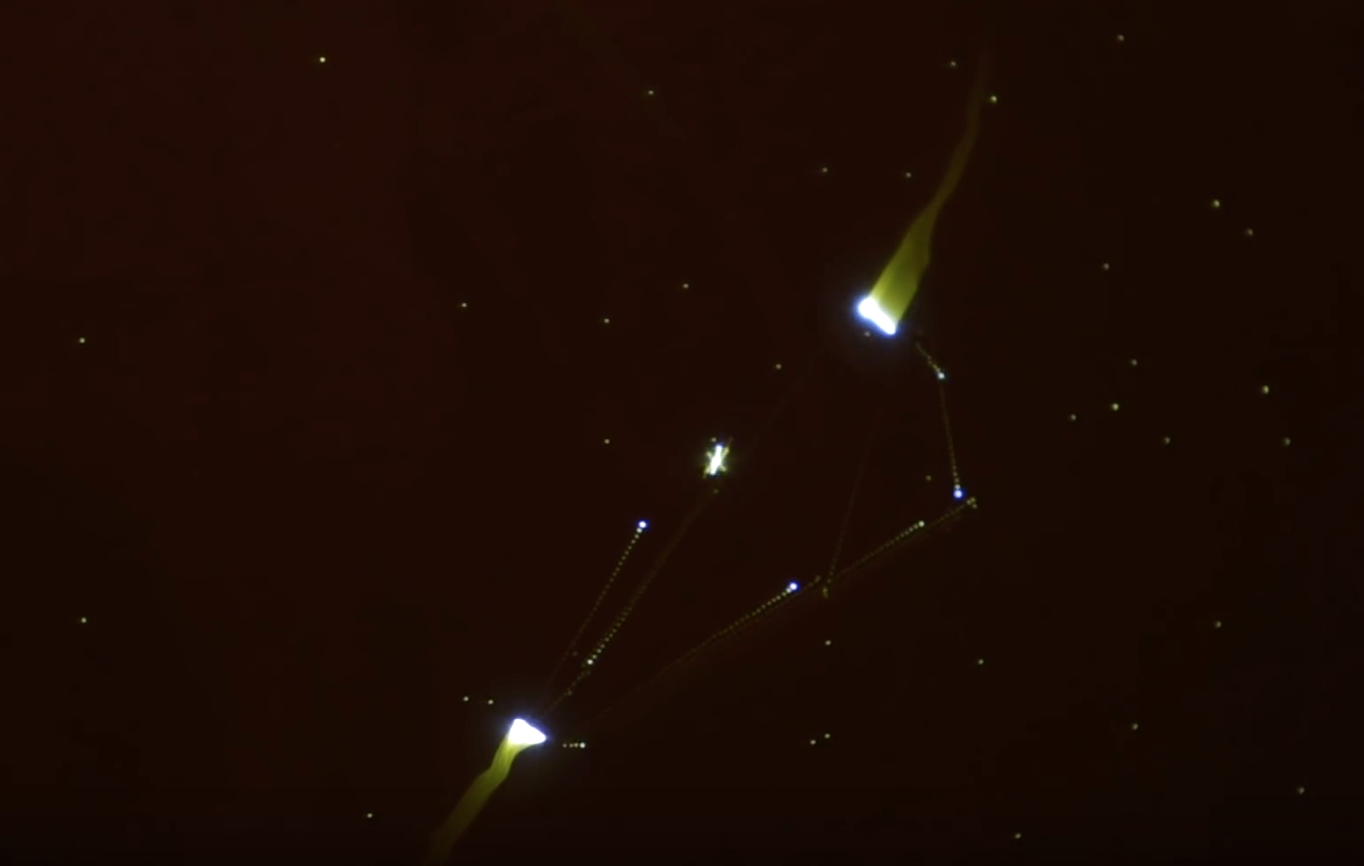 Designed on a PDP-1 at MIT by Steve Russell, this is the first fully interactive video game.
https://www.youtube.com/watch?v=Rmvb4Hktv7U 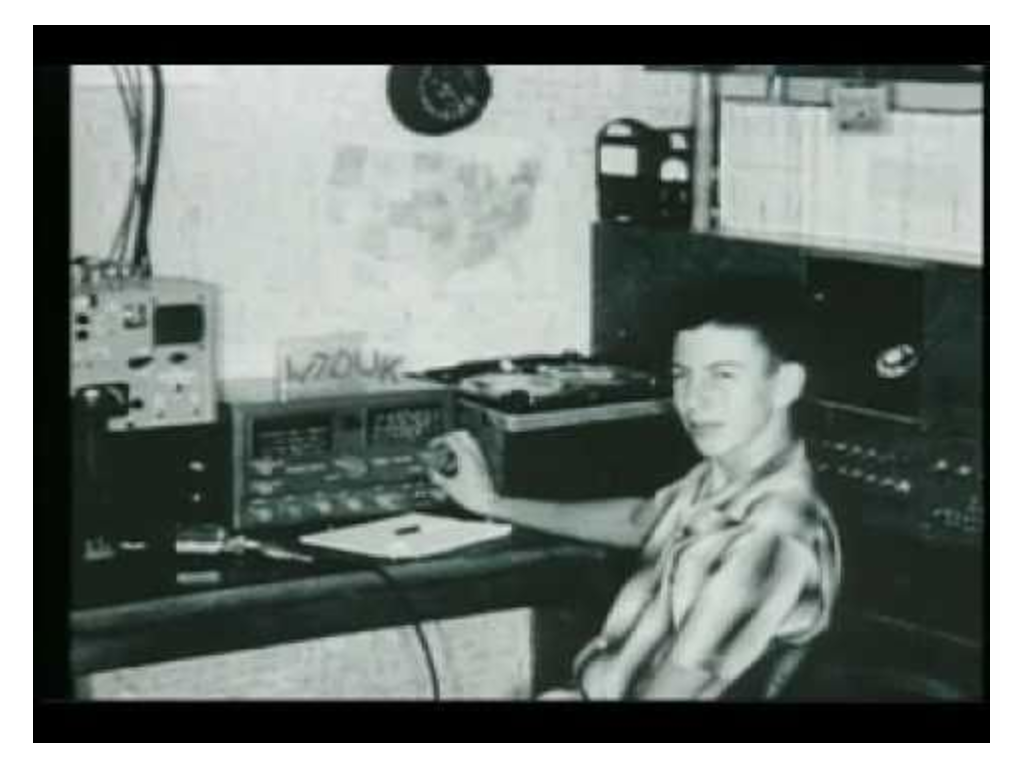 Interview with Nolan Bushnell, founder of Atari, from the documentary Silicon Valley: A 100 Year Renaissance https://www.youtube.com/watch?v=WW_rCV254yg 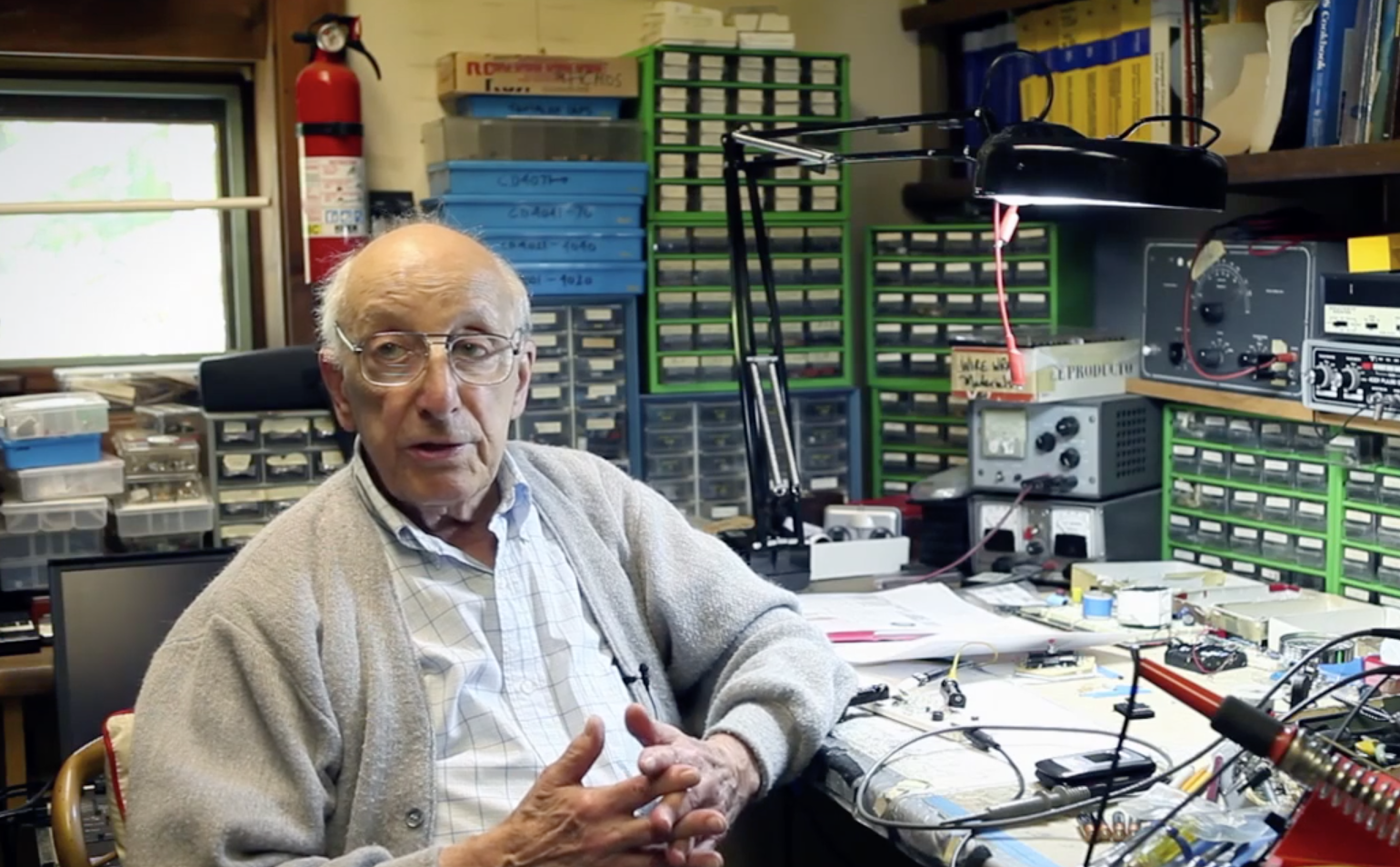 Interview with the inventor of the Magnavox Odyssey, inventor Ralph Baer
https://vimeo.com/37870722

In 1975 Ralph Baer and Magnavox, creators of the first home console system – the Magnavox Odyssey – sued Atari (and many other companies, including Bally Midway, Allied Leisure and Chicago Dynamics) for their clones of the Magnavox Odyssey’s ‘Table Tennis’ game. The Atari game in question was ‘Pong.’

Due to the patents held by Baer and Magnavox parent company Sanders Associates, and coupled with the fact that there was ample evidence of Atari founder Nolan Bushnell having played ‘Tennis’ at a product exhibition (he actually signed a guest book indicating that he had played the game on the day in question), Atari decided to settle the case outside of the courts, for about $700,000. Other companies were also forced to pay royalties for similar ‘Pong’ clones.

As part of the June 1976 settlement, Magnavox would obtain rights to any Atari products released for the next year. Atari therefore decided not to release any new titles for the next year. This was the first strike from Magnavox, Sanders and Baer in what was to become a lucrative business of defending their intellectual property and receiving license fees.

In 1985 Nintendo was fast becoming a video game titan themselves, leading the invasion of the third generation of consoles, but even they could not stand up to the watertight patent laws, and after attempting to invalidate Baer’s patents, they were forced to continue paying royalties to Sanders.

The following website is The History of Video Game Lawsuits:
http://mygaming.co.za/news/

Nintendo was known in the 1980s for its draconian licensing conditions and rabid prosecution of all “unlicensed” game producers. One of the sore points among developers of the period was the fee that they had to pay to Nintendo to get their games licensed, which meant that Nintendo tested them and produced them at its own facilities (either part of the fee or for an additional cost). Another sore point was that Nintendo actually decided how many cartridges of each game it would manufacture. The company’s virtual monopoly in the console market at the time allowed it to basically impose any rules that it chose, and the rules were always meant to increase profit, quality, or both. Several companies began producing games, refusing to pay the licensing fee (or being refused by Nintendo), and all were eventually forced out of business or out of production by legal fees and court costs for extended lawsuits brought by the giant against the transgressors. The one exception was Color Dreams whose religious themed games under the subsidiary name Wisdom Tree prevented Nintendo from suing due to a fear of public backlash.

Companies that made unlicensed games include (Nintendo did not sue every one of these companies): 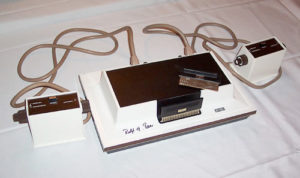 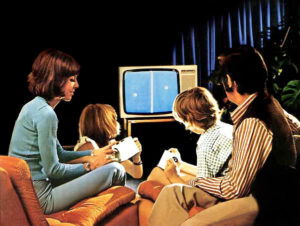 The system had three moving components, two players and a ball, and used transparent overlays that taped to the screen for different game configurations. 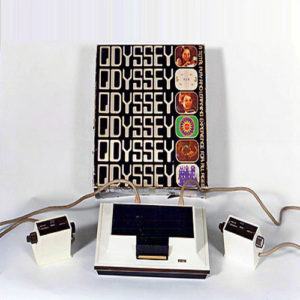 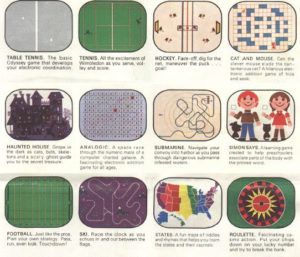 Twelve games shipped with the original Odyssey game box in 1972. 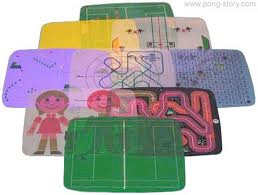 The Odyssey system shipped with plastic overlays that were attached to the TV screen to “create” different games for the user. 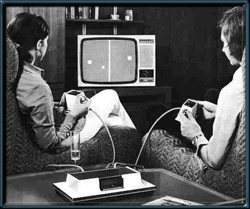 The Odyssey was a multi-player game. 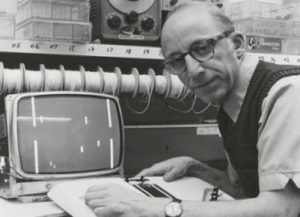 Ralph Baer was the inventor of the Odyssey 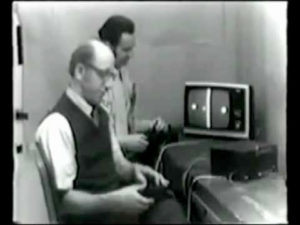 Ralph Baer, foreground, with the Table Tennis game on the screen