Alternatively, most modern computational devices are “digital”. One of the earliest implementations of a digital system is attributed to Joseph-Marie Jacquard of France in 1801, the Jacquard Loom. He used a punched card to control the weaving actions of a loom, which introduced much more intricate patterns in woven cloth. Jacquard’s approach was a variation on the original punched-card design of Jacques de Vaucanson in 1745. de Vaucanson was a toy maker (most famous for his mechanical duck), and his idea of automating the weaving process was not well accepted by weavers (a situation not unlike that of the modern day computer ink and paint process in traditional animation.)

The punched-card idea was adopted later by Charles Babbage in about 1830 to control his Analytical Engine, and later by Herman Hollerith for tabulating the 1890 census. The Babbage Analytical engine (which was never completed by him) was designed to use Jacquard’s punched cards to control an automatic calculator, which could make decisions based on the results of previous computations. It was intended to employ several features later used in modern computers, including sequential control, branching, and looping.

An assistant to Babbage was Augusta Ada Lovelace (or Lady Lovelace), the daughter of the English poet Lord Byron, and a mathematician, who created a “program” for the Analytical Engine to compute a mathematical sequence known as Bernoulli numbers. Based on this work, Ada is now credited as being the first computer programmer and, in 1979, a modern programming language was named ADA in her honor.
From: http://www.agnesscott.edu/lriddle/women/love.htm

In 1878, Oberlin Smith devised a crude magnetic recording device made of a silk thread covered with steel dust. In theory, when exposed to a magnetic field, the steel dust particles would align with the magnet, creating a digital pattern. Smith applied for a patent, but never followed through with the application. He concluded that he wouldn’t be able to establish a useful pattern on the strings, published his results in 1888, but dropped his investigations.

In 1898, inventor Valdemar Poulsen of Denmark filed a patent for a “…method of, and apparatus for, effecting the storing up of speech or signals by magnetically influencing magnetisable [sic] bodies”. His idea was that a wire, when touched with an electromagnet at different points and times, would store a signal that later could be retrieved to recover the same energy that caused the magnetization in the first place. He developed his idea as a “telephone answering machine” called the Telegraphone and started a company to market it. Another of Poulsen’s devices can be considered to be the original version of the hard disk. It consisted of a 4.5 inch diameter steel disk with a raised spiral on the surface which was traced by the electromagnet as the disk rotated, magnetizing the disk in the same fashion as the wire. [1]

Further contributions to magnetic recording were few, until Fritz Pfleumer developed the magnetic tape, which was a strip of paper covered with magnetic dust (the first paper tape used was covered with high grade ferric oxide barn paint (rust red), and a cloud of red dust sprayed the air as the tape was used). The German General Electric company bought the patents from Pfluemer and marketed the first true tape recorder, the Magnetophon (meaning “tape recorder” in French) in 1936.

The U.S. Census Bureau was concerned about the difficulty of tabulating the 1890 census. One of its statisticians, Herman Hollerith, envisioned a machine that could automate the process, based on an idea similar to that used in the Jacquard Loom. Hollerith designed punches for his system, which he called the Hollerith Electric Tabulating System. A pin would go through a hole in the census card to make an electrical connection with mercury placed beneath. The resulting electrical current activated a mechanical counter and the information would be tabulated. The tabulating system was featured in an 1890 issue of  Scientific American magazine.

The 80 column punch card introduced by Hollerith in 1928 became the standard input medium for computers until the late 1970s when interactive systems became usable. It was sized at 7 3/8 inches wide by 3 1/4 inches high by .007 inches thick. Prior to 1929, this was a standard size for many U.S. banknotes, and Hollerith apparently chose it so that he could store cards in boxes made for the Treasury Department.

What became known as the “IBM card” was the source of a popular phrase which became the topic for a great article by Steven Lubar of the Smithsonian in 1992, titled “Do not fold, spindle or mutilate: A cultural history of the punch card.”[2]

Hollerith obtained over 30 patents for his research, but he was not a marketer. He felt he had a choke hold on the census tabulating machine, and he charged the Census Bureau more than it would have cost to do it by hand. As a result, they developed, and in fact patented their own version of the machine. Hollerith almost closed the doors on his company, but he was able to attract a brilliant business mind, Thomas J. Watson, to run it, and his company survived; it would later become International Business Machines (IBM). 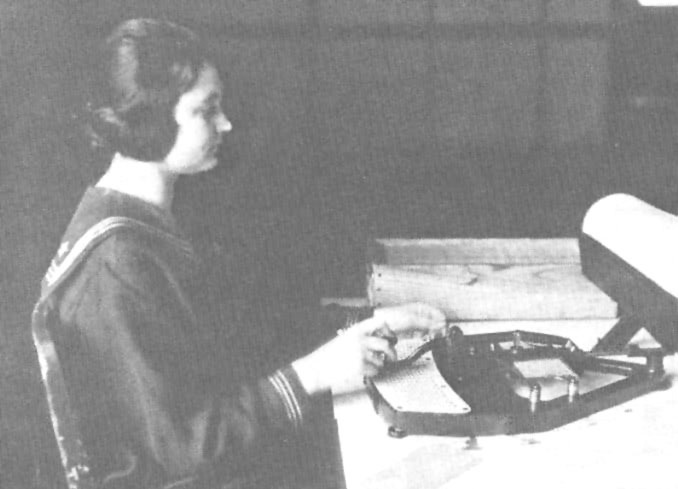 Analog: relating to, or being a device in which data are represented by continuously variable, measurable, physical quantities, such as length, width, voltage, or pressure; a device having an output that is proportional to the input.

Digital: A description of data which is stored or transmitted as a sequence of discrete symbols from a finite set, most commonly this means binary data represented using electronic or electromagnetic signals.