In 1987 an ACM-SIGGRAPH panel released a report done for the National Science Foundation, Visualization in Scientific Computing, that was a milestone in the development of the emerging field of Scientific Visualization. As a result, the field was now on the radar screen of funding agencies, and conferences, workshops and publication vehicles soon followed.

These visualization systems were designed to take the burden of making the visualization image off of the shoulders of the scientist, who often didn’t know anything of the graphics process. The most usable systems therefore utilized a visual programming style interface, and were built on the dataflow paradigm: software modules were developed independently, with standardized inputs and outputs, and were visually linked together in a pipeline. They were sometimes referred to as modular visualization environments (MVEs). MVEs allowed the user to create visualizations by selecting program modules from a library and specifying the flow of data between modules using an interactive graphical networking or mapping environment. In a MVE dataflow diagram, the boxes represent process modules, which are linked by lines representing the flow of data between the modules. Maps or networks could be saved for later recall.

The problem with such packages included poor performance on large data sets, they were more restrictive than general programming environments, they were often not built on accepted graphics standards, and their ease of use sometimes promoted poor visualizations (this often involved a “high glitz factor”).

Wayne Lytle, who worked with the Cornell Theory Center, produced this parody of scientific visualizations for SIGGRAPH 93, called The Dangers of Glitziness and Other Visualization Faux Pas, using fictitious software named  “Viz-o-Matic.” The video documents the enhancement and subsequent “glitz buffer overload of a sparsely data-driven visualization trying to masquerade as a data-driven, thoughtfully rendered presentation,” according to Lytle. 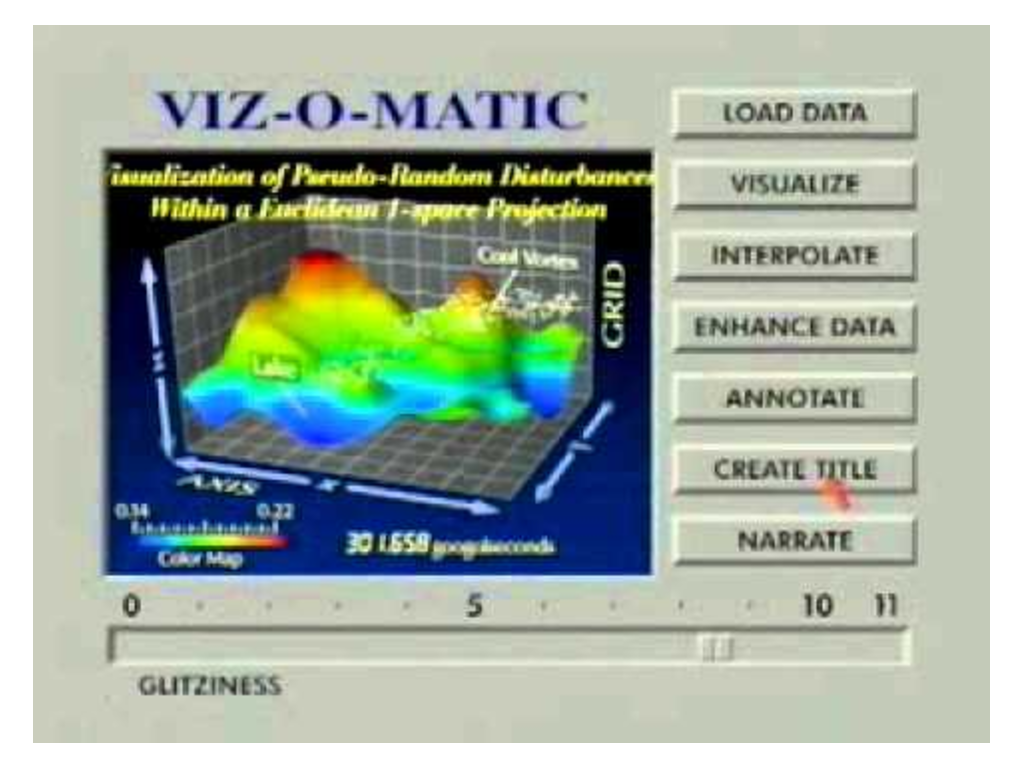 https://www.youtube.com/watch?v=fP-7rhb-qMg
Viz-o-Matic – The Dangers of Glitziness and Other Visualization Faux Pas, or What’s Wrong With This Visualization?
by Wayne Lytle – Cornell University Theory Center, 1993.