These approaches to defining environments and actions in the “physical world” defined by a computer graphics-based synthetic approach can be considered part of a collective family of algorithmic approaches called physically-based modeling. According to Demetri Terzopolous, one of the pioneers of this approach, in a SIGGRAPH 89 panel discussion:

Physically-based techniques facilitate the creation of models capable of automatically synthesizing complex shapes and realistic motions that were, until recently, attainable only by skilled animators, if at all. Physically-based modeling adds new levels of representation to graphics objects. In addition to geometry — forces, torques, velocities, accelerations, kinetic and potential energies, heat, and other physical quantities are used to control the creation and evolution of models. Simulated physical laws govern model behavior, and animators can guide their models using physically-based control systems. Physically-based models are responsive to one another and to the simulated physical worlds that they inhabit.

Two early physically based modeling research experiments were done at Ohio State by Dave Haumann and James Hahn. Hahn’s 1988 work created an animation system that gave the animator control over the simulation of dynamic interaction between rigid objects, taking into account physical characteristics of friction, mass, motion, elasticity and moments of inertia. His system effectively combined kinematics and dynamics in a computationally efficient method. Hahn went on to continue his research as the Director of The Institute for Computer Graphics at The George Washington University.

Haumann’s work with physically-based simulations used simple mass-spring models, through which he could model bridge cables and tanzan vines. He added vector fields to simulate flags and curtains as well. These effects were shown in a 1988 movie that accompanied a paper in SIGGRAPH. His research was used by Chris Wedge in a 1989 movie produced at Ohio State called Balloon Guy. Haumann went to IBM, and experimented with effects for demonstrating the shattering of a physical object. He then experimented with time-varying vector fields, including vortices, sources, sinks and uniform fields for a movie that simulated leaves blowing in these fields. He then expanded his model of leaves, picked a leaf shape that floated nicely, and showed a movie illustrating his work. After IBM he went to Pixar, where he worked on the Pixar short Geri’s Game. 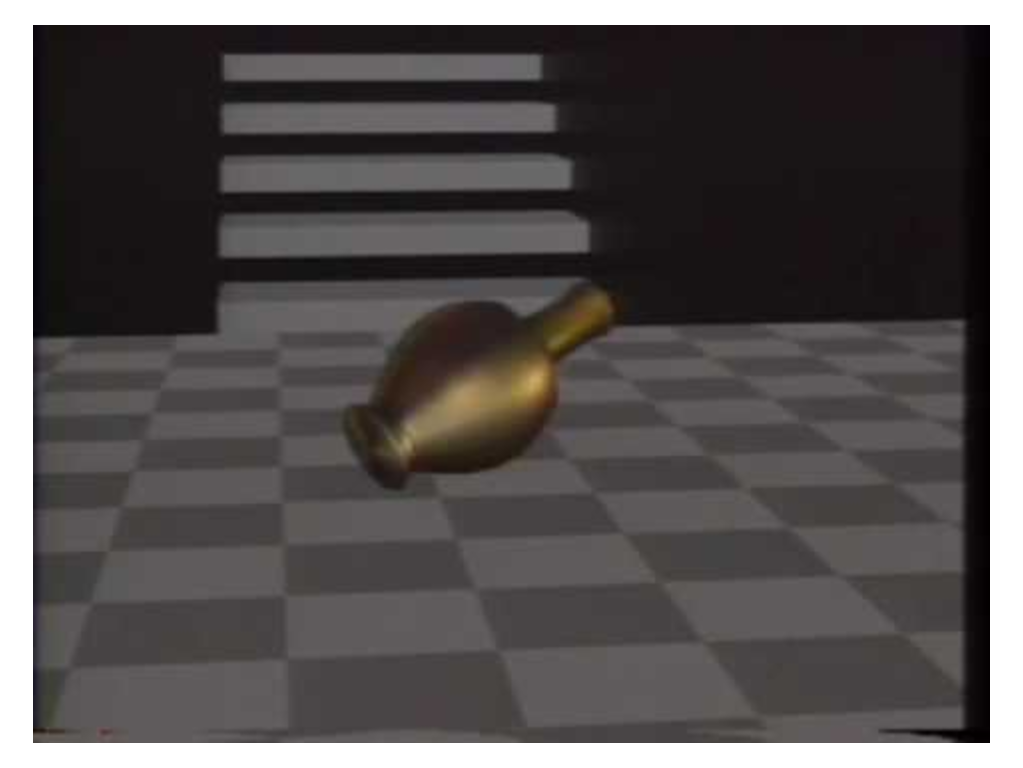 Al Barr advised several important researchers at the Graphics Group at Cal Tech. His students included Ronen Barzel (Pixar), John Platt (Microsoft), David Kirk (NVIDIA), Kurt Fleischer (Pixar) and others. Together with Andrew Witkin, Barr coordinated several sessions related to physically-based modeling for the SIGGRAPH courses program (1987-1991), as well as panels and papers on the topic. The list of papers below shows the influence of the CalTech researchers on this area of graphics. A complete list of their publications can be found on their web site at
http://www.gg.caltech.edu/publications.html#papers

Introduction to Physically Based Modeling, Course Notes, with A. Witkin, ACM SIGGRAPH, 1990 and 1991

Demetri Terzopoulos received his university education at McGill University (B.Eng. 1978, M.Eng. 1980) and MIT (PhD 1984). He does pioneering work in artificial life, an emerging field that cuts across computer science and biological science. He devises computer models of animal locomotion, perception, behavior, learning and intelligence. Terzopoulos and his students have created artificial fishes, virtual inhabitants of an underwater world simulated in a powerful computer. These autonomous, lifelike creatures swim, forage, eat and mate on their own. Terzopoulos has also done important work on human facial modeling. He has produced what is widely recognized as the most realistic biomechanical model of the human face to date. Expressive synthetic faces are useful in entertainment and human-computer interaction, but they can also play a role in planning reconstructive facial surgery, as well as in automated face recognition and teleconferencing systems. Terzopoulos is widely known as the inventor of deformable models, a family of shape modeling algorithms that have bridged the fields of computer vision and computer graphics and have opened up new avenues of research in medical imaging and computer-aided design.

ACM SIGGRAPH recognized Andrew Witkin for his pioneering work in bringing a physics-based approach to computer graphics with the 2001 Computer Graphics Achievement Award. Witkin’s papers on active contours (snakes) and deformable models, variational modeling, scale-space filtering, space time constraints, and dynamic simulation are considered landmarks that have been inspirational to others and have shaped the field in such different areas as image analysis, surface modeling, and animation.

He received his Ph.D. at the Massachusetts Institute of Technology in the psychology department. In the early 1980s, the vision and graphics research communities were largely disjoint. Witkin was one of the first to bridge the divide in a series of papers that included his 1987 prize winning paper Constraints on Deformable Models: Recovering 3D Shape and Non-rigid Motion and Snakes: Active Contour Models, both co-authored with Michael Kass and Demetri Terzopoulos. These papers popularized the idea that computer vision techniques could provide interactive “power assists” to a human operator creating computer graphics models.

While still at Schlumberger, and subsequently as a professor at Carnegie Mellon University, Witkin did notable work on the use of physically-based modeling techniques not only for animating rigid or deformable objects, but also as an interaction technique for a range of problems including constrained geometric modeling and camera control (with Michael Gleicher) and visualization of implicit surfaces (with Paul Heckbert). In 1992, with Michael Kass, Witkin won a Golden Nica from Ars Electronica for his use of physically based modeling of reaction-diffusion equations to synthesize organic looking textures. In 1988 Witkin, with Michael Kass, introduced the idea of using control theory in computer graphics with their Spacetime Constraints paper and showed that optimization could be used to direct physically-based character animation.

Witkin then became interested in the very difficult problem of clothing simulation. With David Baraff at Carnegie Mellon University, Witkin developed the clothing simulator which formed the basis of Maya Cloth, and which was used in the production of Stuart Little, among other films. With David Baraff and Michael Kass at Pixar Animation Studios, Witkin developed the clothing and hair
simulator used in the Pixar/Disney film Monsters, Inc.

Monsters Inc. marked Pixar’s first extensive use of physical simulation in a feature film. Pixar animators directly controlled the movements of the characters’ bodies and faces, but much of their hair and clothing movement was computed using simulations of Newtonian physics. Physical simulation allowed a degree of realism of motion that would not have been possible with traditional methods. Nonetheless, adding this type of simulation into the Pixar production pipeline sometimes caused surprising and amusing results. One of the key developments that allowed clothing simulation to go smoothly during the production was a set of algorithms for untangling simulated clothing when the animation process distorted it significantly. The algorithms allowed the simulator to handle a range of non-physical situations like character interpenetrations without producing unpleasant visual artifacts.

David Baraff joined Pixar Animation Studios in 1998 as a Senior Animation Scientist in Pixar’s research and development group. Prior to his arrival at Pixar, he was an Associate Professor of Robotics, and Computer Science at Carnegie Mellon University. Baraff received his Ph.D. in computer science from Cornell University in 1992, and his Bs.E. in computer science from the University of Pennsylvania in 1987. Before and during his graduate studies, he also worked at Bell Laboratories’ Computer Technology Research Laboratory doing computer graphics research, including real-time 3D interactive animation and games. In 1992, he joined the faculty of Carnegie Mellon University. In 1995, he was named an ONR Young Investigator.

Michael Kass held a research position at Schlumberger Palo Alto Research before joining the ATG.  He then left to become a Senior Scientist at Pixar Animation Studios in 1995. He received his B.A. from Princeton in 1982, his M.S. from M.I.T. in 1984, and his PhD from Stanford in 1988. Kass received numerous awards for his research on physically-based methods in computer graphics and computer vision including several conference best paper awards, the Prix Ars Electronica for the image Reaction Diffusion Texture Buttons, and the Imagina Grand Prix for the animation Splash Dance, a film he produced with Gavin Miller. Kass published widely, and two of his notable papers dealt with constraint-based dataflow and rapid, stable fluid dynamics. He also contributed to cloth and hair simulation, particularly for Geri’s Game and Monsters Inc.

Gavin Miller contributed to the animated shorts Splash Dance (with Kass), The Audition (with Eric Chen), Flow (with Ned Greene),and Her Majesty’s Secret Serpent (with Kass and Lance Williams). He worked on issues of motion dynamics (of snakes and worms), viscous fluid animation,  terrain mapping, flexible body motion, and other areas of natural phenomena representation. He received his PhD at Cambridge University and was at Alias before joining ATG. He left to join Adobe, where he worked on Acrobat 3D. The image above shows his fluid flow and his accessibility shading research, with the left model of him and the right of his co-contributor Ned Greene.

Ned Greene graduated from UC-Santa Cruz after working from 1980 to 1989 at NYIT and later at ATG from 1989 to 1996. He worked with Kass and Miller modeling scenes for several animations (Flow – 1993, Splash Dance – 1990, The Audition – 1990), and also on visibility algorithms for rendering complex scenes. Greene left ATG to go to HP and NVIDIA.